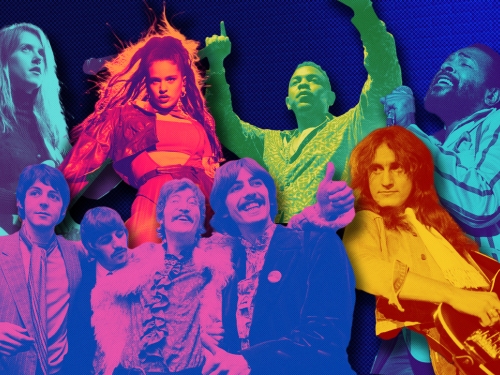 From prog epics to R&B masterpieces, these are the records that define music at its most ambitious

Thematic albums, tied together by very specific moods or interconnected songs, aren’t new to pop; the kingpin of the form, Frank Sinatra, started making them 70 years ago. And thanks to Sgt. Pepper’s Lonely Hearts Club Band, Tommy, and so many more, rock took the concept of a concept album and ran with it—with narrators, characters, and lots of lyrics and liner notes to explain it all to unsuspecting listeners.

In the streaming era, you’d think concept albums, which require listening to a record all the way through, would have about as much appeal as ripping the plastic packaging off a new CD. But right along with vinyl, the theme record is have a new moment. Taylor Swift’s upcoming Midnights is, she says, “the stories of 13 sleepless nights scattered throughout my life.” Concept, anyone? Other story-song albums released over the last year include Sturgill Simpson’s cowboy revenge saga The Ballad of Dood and Juanita and the Tedeschi-Trucks Band’s I Am the Moon, a four-EP response to Layla. Smashing Pumpkins’ ATUM: A Rock Opera in Three Acts begins a three-part rollout next month.

In honor of Midnights and its concept siblings, we present the 50 Greatest Concept Albums of All Time. These are the mindblowers that define music at its most ambitious. They map out epic narratives (from raging coming-of-age dramas to dystopian sci-fi fantasies); they strive to embody vast historical and political moments; they’re “cinematic,” “operatic,” “novelistic.” Our list touches on everything from classic rock to R&B to punk to hip hop. Some of those longform listens have been rattling bongs since back when your hippie uncle bought them on 8-track; some are more recent pop masterpieces that sneak deep meanings inside slick packages. Many are long, several are very very long. One is by Styx.

To make it high on the list an album had to be both conceptually tight and musically awesome, which is why a few classic albums with relatively loose thematic conceits didn’t end up higher. Sit back, press “play” and envelope yourself in a whole bunch of music you’ve really got to pay attention to.