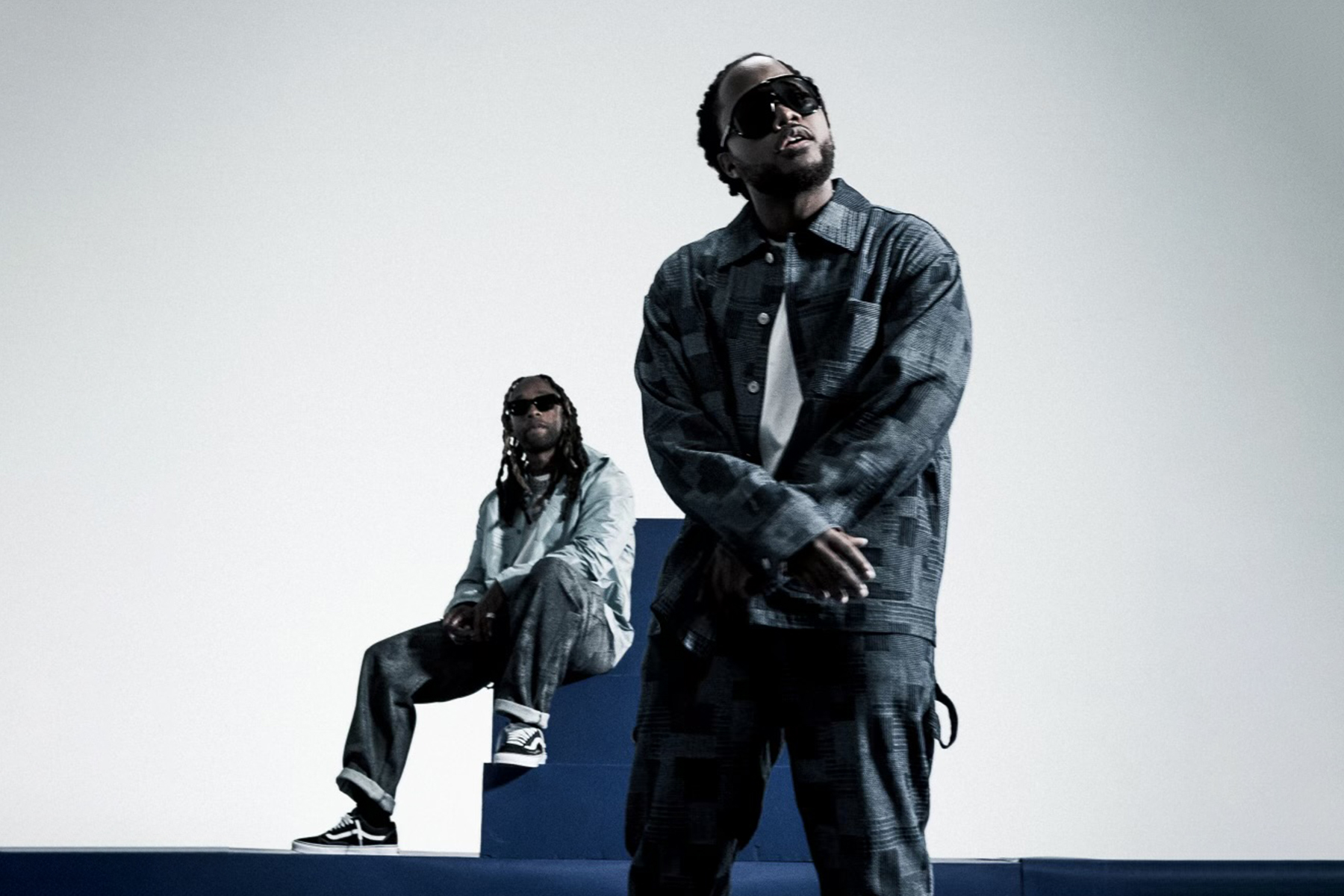 When Leon Thomas III wrote his song “Love Jones” a few years ago, he had one artist in mind for a feature: Ty Dolla $ign. “I really didn’t know this man,” Thomas tells Rolling Stone. When he saved the recording to his iTunes, he named the file “Love Jones ft. Ty Dolla $ign.” He never imagined that years later, Ty would not only hop on the song but sign him to his label imprint, EZMNY Records.

“It’s just crazy to see that now we’re at this point where we’re releasing music together. And we’re working with a well-oiled machine,” Thomas says. “It’s just another affirmation that I’m doing the right things.”

Thomas’ big moment — being co-signed to Motown and EZMNY Records after dropping only an EP — has been years in the making. He started his journey in entertainment as a staple on Nickelodeon, playing André, a high school music producer, on 2010’s Victorious, the show that launched Ariana Grande’s career.

Though it became Grande’s launch pad, “The number of Nickelodeon and Disney male artists making it out of that vortex is very low, especially when it comes to making a stamp in music in a real way,” Thomas explains. (The only other artist in a similar place as Thomas is Disney Channel’s Mateo Arias, who has opened for the likes of Justin Bieber under the stage name ¿Téo?)

After his stint on Nickelodeon, Thomas became a behind-the-scenes go-to in R&B and pop, producing songs by Toni Braxton, Zendaya, Kehlani, and Drake. (He also worked closely on several of Grande’s projects.) That hustle and journey motivated Ty to put “everything” behind Leon. “I think he’s the greatest artist I’ve heard in a long time,” Ty says.

After releasing “Love Jones” ahead of his upcoming album Electric Dusk, Ty and Thomas spoke to Rolling Stone about their musical partnership as Thomas shared some standout moments working with the likes of Drake.

I have two kings on the line: Leon and Ty. This is super exciting.

Alright, three kings! How are you guys feeling about this release? Leon, it’s been a few months since the signing was announced. And Ty, this is your first signing on your record imprint?

Leon: It’s been a true pleasure. Shawn Barron, a mutual friend of ours and Ty’s partner, put together just an amazing meeting about us joining forces. I’ve been a fan of Ty Dolla $ign’s for a long time. I was signed to Rostrum, which was heavily connected with Mac Miller and Wiz Khalifa. Seeing the association between Wiz and Ty, it was so cool to see this musical clique dominate the charts. ‘Love Jones’ has just been a great cultivation of manifestation. Things just happen at the right time.

Ty: The first time I heard Leon, I was blown away. As soon as the opportunity presented itself, I was like, ‘Fuck yeah! Let’s go.’

What do you think makes Leon so special?

Ty: He’s for real with it. It’s not about the bullshit. I’m not trying to diss anybody out there. But there are a lot of people out there that are mid. Leon just goes all the way above and beyond on whatever he’s doing. Whether it be vocals, whether it be making the beat or playing instruments — he’s just that guy.

Leon, you have writing and production credits for everybody. I know you’ve also had your own solo music projects, but what makes things different today?

Thomas: On this project, I was able to take more chances. I spent probably about two and a half years actively creating songs for it and collaborating with some of the best producers and songwriters. We put together something really special, man. It’s a true depiction of who I am with no filters. Prior to this, I had to walk the line of still being marketable to a super wide audience. But on this one, I felt like I was just authentically being myself. And that’s one of the greatest feelings in the world.

Talk to me about your journey from being a staple on TV with Victorious to now cementing yourself as a musician.

Thomas: I had always been involved in music in a very authentic and organic place. I knew after Nick, I really would still have to prove that I was an actual musician and I could really do everything that they saw on screen. I never really looked at it as a negative thing. I always thought it was just super positive to have people all over the world. It’s just a plus when I’m trying to really get out there and tell my story through music.

Man, I actually talked to Drake about this a little bit. For him, he would always say that he kind of hated it when people mentioned Degrassi. But for me, I was able to embrace the fact that, yes, I did have a past on a children’s network, but I got to work with some of my heroes. It’s actually only been a blessing coming from that situation.

I love to hear that because it’s such a contrast from being on an iconic Nickelodeon show to producing some of the biggest records and writing on them. You mentioned Drake. What have been some of those standout moments for you when producing or writing for other artists?

Thomas: Going out to the Bahamas to work on Certified Lover Boy, I was able to see the inside of Drake’s working machine. I was definitely taking notes. I feel like keeping a day one team of people who are really there for you outside of what they can gain from the exposure is key to what makes him successful. He’s around people who are actually invested in him as a person, which I thought was really great.

Working with Ariana [Grande], I was able to see a very similar situation. She was able to cultivate a team surrounding her that’s the barrier between her and the rest of the world in a very positive way. I even noticed that with Ty. He has a really solid team. That’s been my biggest thing: Making sure that my team is working like the well-oiled machines that I’ve been around.

It was cool to see you producing on Yours Truly and then come back with “Safety Net” featuring Ty. It seems like a full-circle moment.

Thomas: Super full circle. It was all serendipitous. I actually met up with her that day that we did ‘Safety Net’ to simply just to kick it, but I happened to bring my laptop, and my ex-production partner pulled through, and we ended up just putting together some really amazing ideas with her. Then the next thing we knew, Ty just pulled up, and he was ready to cut. We were like, “Well, this is crazy!” And I already knew Ty. It was just perfect timing. A lot of the things in my life right now just seem like an exercise in destiny.

You’ve built yourself up to here, and it can only continue going up.

Thomas: I’m excited to fly, man. Ty is a really good dude and has an amazing reputation within the industry. And there’s a reason that he’s so successful because he’s easy to get along with and extremely professional. I have a lot to learn. I’m always studying, and I try to ask as many questions as possible, and Ty is nice enough to answer my long-ass text messages.

Ty: [laughs] Appreciate you, bro. Just like he says he’s learning from me, I feel the same about him. I learn things just from being around him. I’m glad I could be there for any type of support that I can be for this amazing guy.

Having the name Ty attached to so many artists has helped many rise to the forefront. What is it like for you to support talent a like Leon, who deserves to blow up?

Ty: That’s the most important. When I was coming up, I felt like I was doing music for a long time. And finally, I just got whipped around the right circle of people. Wiz [Khalifa] is that guy for me. He was just always supporting me. Trey Songz as well. Kanye, too always just being there, supporting me. It’s only right that I do the same for people that I believe in. Leon is just that guy.

Talk to me about the new song. Why did you choose to hop on it?

Ty: He played this joint for me a couple of years ago, and I’m not gonna lie: I actually wanted to put it on my last album. And I was like, ‘You know what, I’m gonna let him get that.’ I was definitely trying to steal that thing. [laughs]

Thomas: [Laughs] Well, I appreciate it, man. It’s just been a journey. “Love Jones” came from me being in a relationship with a girl who was just so in love with her career, her business, and her art. I thought that was just such a beautiful thing. She was obviously beautiful as well. But that was something that really attracted me to her. I felt like that feeling deserved a song. Love Jones is actually one of my favorite films and what was beautiful about that film is that they both had creative passions. The song always felt super special.

Can you like give me a little taste of the vibe on your album, Electric Dusk?

Thomas: It’s a sonic gumbo of my favorite eras of music. I messed around with a lot of sounds that are pointing towards, like the psychedelic: Zombies, Jimi Hendrix vibes. Others are more Nineties and my love for D’Angelo and Tribe Called Quest, which you can hear all throughout the album. I just got more experimental on this one. I was able to authentically be myself musically. When you hear it you’ll know that it’s going to be my specific DNA.

Ty, how would you describe this record?

Ty: I love the way Leon speaks for himself. I’m gonna just be real with you: It’s giving classic. It’s giving no skips. All the way through, just ‘Oh my fucking God!’ I’m super excited for this guy. It made me want to go back to the studio and redo my whole album.

Leon: Damn, I didn’t know all that!

Ty: It’ll make another artist insecure, I promise you.