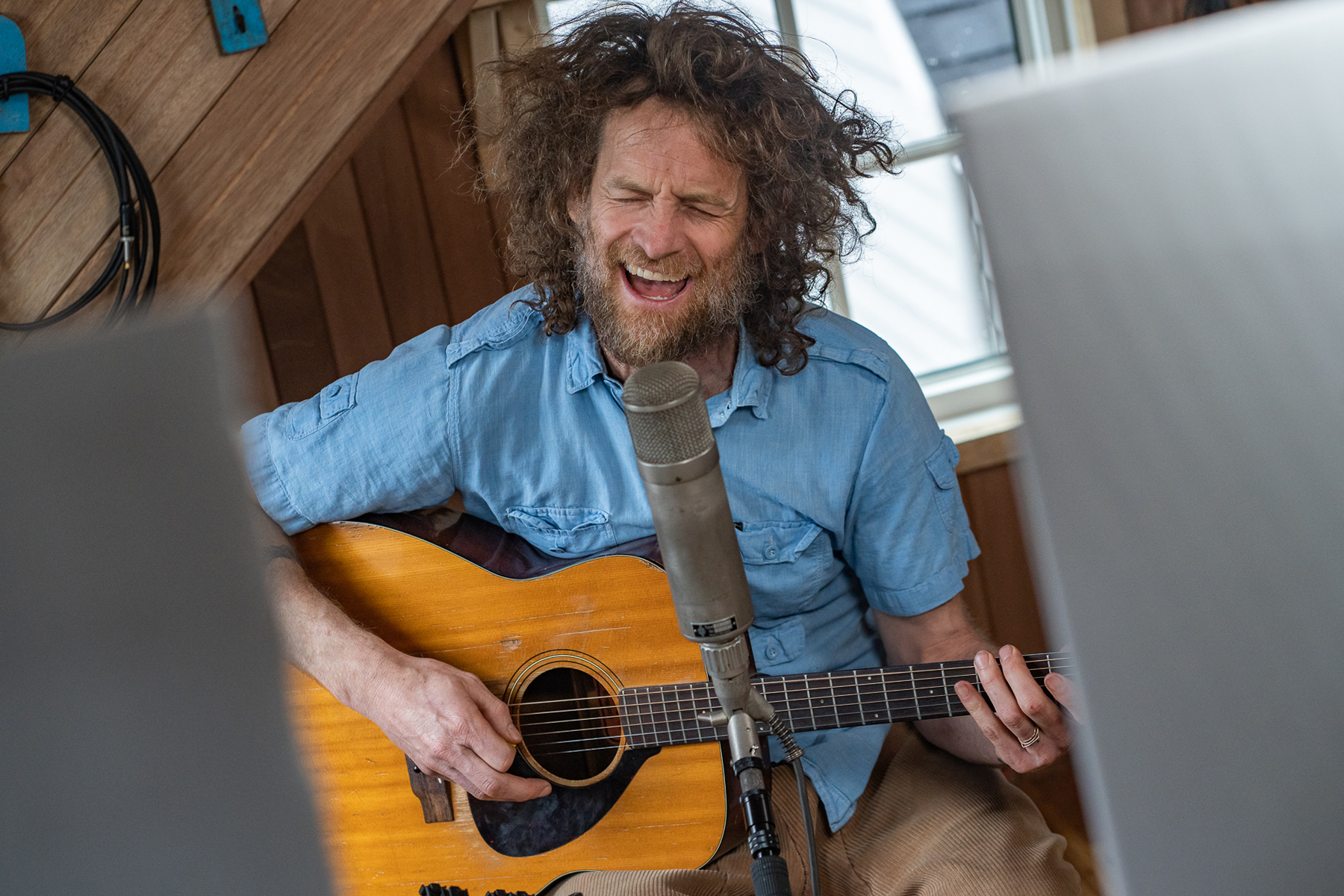 It’s a gray April morning in a sleepy town outside Boston, and Chadwick Stokes is in the wood-walled studio above his garage, reworking a song he wrote decades ago.

“The General” tells the tale of a Civil War veteran who has a dream that makes him realize the futility of combat. Stokes wrote it for his band, Dispatch, and it originally appeared on the group’s 1997 album Bang Bang. Since then it has become one of the band’s most well-known tracks, a staple of Dispatch shows and big on streaming services. It even got a shout-out on Hulu’s biotech-scammer drama The Dropout earlier this spring. (“You don’t know Dispatch?” eventual whistleblower Tyler Shultz, portrayed by Wallows vocalist and 13 Reasons Why star Dylan Minnette, incredulously asks his lab partner before belting a few lines of the song’s soaring chorus.)

Stokes, Dispatch’s chief lyricist, has recounted the tale of the existentially troubled 19th-century general and laid down the song’s Jimi Hendrix-inspired riff hundreds of times. But the run-throughs this morning are different: The lyrics have been translated into Russian, and the recording — translated to “Генерал” — is a gesture of solidarity with Russians around the world who might be questioning their country’s invasion of and provocations toward Ukraine.

“When the invasion started, we put up a Ukranian flag on our Instagram,” Stokes says in his cozy living room after the recording of “The General” has wrapped. “One person [in the comments] suggested singing ‘The General’ in Russian.” The band replied, “If anyone wants to translate and make it work w the song let’s do it!”—and that started the chain of events that led to the Russian-language version of “The General” being recorded and released as a video.

Through Facebook posts and other connections, Stokes found a friend of a friend, Olga Berg, who was willing to help translate the song into Russian — a language he didn’t speak. She worked with him on the track for a couple of weeks, their daily drills not only bringing “The General” to life in Russian, but also tailoring it a bit for the modern conflict.

“This one part usually goes, ‘Take a shower, shine your shoes,’ and she said to me, ‘I’m not sure “take a shower” is going to work,’” recalls Stokes. “So we changed it to [the Russian translation of] ‘Polish your boots, and go on your way.’”

Those drills also helped Stokes through the intricacies of the Russian language. Every day, up until the night before “The General” was committed to tape, Stokes and Berg hammered out a way for him to bring “The General” to the Russian-speaking audience, using voice memos and texts to make Stokes feel as natural as he might while singing “The General” in its original form. “Olga and I have been working daily, one piece at a time, trying to get it right — then doing it again,” says Stokes. “[She called] me from a bathroom in the middle of the night so that she could fix my pronunciation.”

Communication technologies that didn’t exist when “The General” was initially released — Facebook, WhatsApp — helped facilitate Stokes’ cross-continental crash course in Russian.  “It felt kind of like we were in the future, or like she was a spy,” Stokes says, laughing. “It would be late at night [in Poland], and everyone’s sleeping, so she’s whispering Russian to me.”

Berg works with several nonprofits, including the Polish Institute for Emergency Medicine, which is collaborating with other organizations in Europe to bring medical supplies into Ukraine[MJ1] [MJ2] . “She’s actually doing the work,” says Stokes. “She was in Poland for most of the time we were working together, exhausted from ferreting medical supplies to and fro.”

Over the course of the morning, Stokes works out the intricacies of the song’s translated lyrics, which hang on oak tag in front of him, while switching his guitar between a 1960s FG-140 Yamaha and a gritty-sounding suitcase guitar made by Chopped Guitars[MJ3] . The emotion driving each take is apparent even to non-Russian speakers, although getting this performance to those who might be troubled by their country’s actions is the goal.

The story-song nature of “The General” encourages its listeners to think about the human consequences of war, and how forcing people to act against their humanity can corrode someone’s essential personhood. “I think the best protest music just tells the story instead of just being like, ‘This is a protest song,’” says Stokes, who counts the Hair soundtrack, Bob Dylan’s “Masters of War,” and Bob Marley’s “War” among his favorite anthems of agitation. “It’s more just like, ‘Here’s a story.’ The listener can deduce what’s happening, and sometimes that’s more powerful.”

With Russia’s access to the global internet limited, how much the song will penetrate the country is an open question. “We’ll put it up on the Dispatch YouTube and say, ‘Hey, if you have any Russian friends or family, feel free to send this along,’” says Stokes. “You never know where it could go.” But Stokes believes that the message of “The General,” combined with its call for donations to the American nonprofit the Leleka Foundation — a U.S. partner of the Institute for Emergency Medicine — makes the video release worth it.

“Some of those soldiers are being forced to destroy their humanity. Think of the ramifications they’re going to have for the rest of their lives — that’s what this song is about,” says Stokes. “It’s about that general in the song, dreaming of the enemy, and seeing that they’re just people just like he is. He’s come around and embraced that love, or that sense that it’s not worth it to destroy lives.

“I don’t know if one person’s going to hear it or many,” he continues, “but it’s worth a shot.”