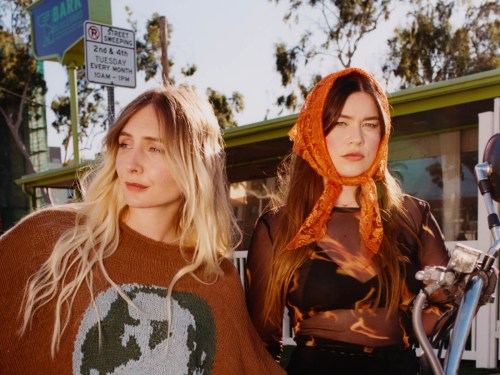 THIS YEAR, THE relentlessly clever and catchy indie-rock duo Wet Leg — Rhian Teasdale and Hester Chambers — became the first buzzy British band in eons to conquer the U.S. A pair of undeniable debut singles, “Chaise Longue” and “Wet Dream,” presaged a self-titled album that managed to live up to the hype. A Best New Artist nod, among others, seems likely for Wet Leg — and the two Isle of Wight natives, who are set to open for Harry Styles next year (their live band includes three other players), are taking it all on with their customary dry sense of humor.

Have you ever even seen the Grammy Awards?
Rhian Teasdale: It seems so glamorous, but I’ve literally never watched it. I guess I’ve seen, like, stuff come up on social media. But I think between us, we probably don’t really watch much TV.

What’s your Album of the Year pick?
RT: I would probably choose Little Simz’s new album. [Note: Little Simz’s acclaimed 2021 LP, “Sometimes I Might Be Introvert,” was technically released before this year’s eligibility period.]

Hester Chambers: Big Thief’s Dragon New Warm Mountain I Believe in You. When that came out, I couldn’t listen to anything else for like a whole month.

Even from the outside, it’s been wild to watch Wet Leg go from this buzzy little band with a couple of singles everyone was talking about to a band that’s playing to huge festival crowds. What’s that journey been like for you?
HC: It’s really strange. I can’t really internalize it very well. I’m speechless. We didn’t even imagine, never even thought that any of this would happen. It’s really, really weird and cool when people are singing the words of Wet Leg songs, like, with us. Very strange and nice.

RT: It’s such a shock. But it’s kind of wholesome, because it’s me and Hester and the rest of our band, who we’ve known for, like, 12 years. We were at college together. And so we get to experience it all together and be like, “Imagine going back to when we’re at college: ‘Oh, in 12 years’ time, you’re all gonna be in a band together. You’re gonna play Glastonbury.’ ”

Are you bored with playing “Chaise Longue” yet?
RT: It’s really fun when people are crowd surfing, but it’s not fun to play in rehearsals anymore. Because we know it so well. So when we’re rehearsing our set, we’re usually pretty silly by the end of it. We’re just like, “On the cheese log, there’s a big frog, I’m a bad dog” — making it entertaining for ourselves.

Your songs can be very funny. Some bands pull back on that because they somehow think it interferes with being taken seriously. Was that ever a topic of discussion?
RT: Our band is called Wet Leg! [Laughs.] Like, at the end of the day, regardless of what we write, we called our band Wet Leg for a reason.

HC: You can be as serious or as unserious as you like, at any point, I guess. That’s the thing with music. There’s not many rules.

Rhian, how did your talk-singing style develop?
RT: When we were writing the songs, that was just what came out, more or less. It’s just ad-libbing, and it’s easier to freestyle words without having to think of the melody. People do it all the time if they’re rapping. Not that I am by any means, at all, rapping! . . . When I was doing solo stuff, I was a bit younger and I was always trying to prove what a great range I had. It’s like a kid bringing out a ripping guitar solo in the most inappropriate place, and I would do that with my voice quite a lot. I guess I’ve grown up.

Guitar-based indie rock isn’t at its commercial high point in 2022. What led you there in the first place?
RT: When we first started, I played kind of folky piano and Hester was playing more finger-picky guitar. I listened to the Strokes, Kings of Leon, and I never saw that for myself — it’s quite male-dominated. There weren’t many girls in guitar bands in our community. But Hester and I still listened to it, and went to festivals, and really enjoyed the shows. And we were like, “Why don’t we do that? We could take up that space. We could start a band. We could play guitar. We can have distortion pedals!”

“You can be as serious or unserious as you like, at any point. That’s the thing with music. There’s not many rules.”

There’s a weird thing where, I guess because of your rapid rise, people love to call you an “industry plant,” whatever that’s supposed to mean. And you’ve cleverly poked back at the idea online.
RT: If you’re a guy in a band, I don’t think you get it as much, I’ll say that. When it comes down to it, it’s just misogyny, isn’t it? And yeah, if people are gonna troll us, then I’m definitely gonna troll them back.

It was reported recently that you’ve already finished your second album. I don’t know if you were just messing with an interviewer or . . . ?
RT: We did an interview with [U.K. radio station] Absolute Radio. The whole interview, we were giving each other banter. He was like, “Have you finished the album?” We were like, “Oh, yeah.” He was like, “What kind of album is it?” And we were like, “It’s death metal.” It was very obviously a joke. And then the NME were like, “Great, let’s publish this!” [Laughs.]

So, in reality, what are your thoughts on the pressure of a second album?
HC: Hopefully we have a bit of time next year to brainstorm. If we write an album in a week that we love, that’s sick, but if it’s actually gonna take a year . . . we’ll have to wait and see. An album is like a snapshot, and you can set your intention. If you just want it to be, “This is what’s bringing us joy at the moment,” that’s valid — or if you want to make sure it’s something, in your mind, that’s perfect, it takes a lot longer.

RT: I’m excited to approach writing in a different way, because for the most part the album we just put out was mainly me and Hester. Now that we’ve got our band around us, I’m looking forward to a much more collaborative, less lockdown-induced album-making experience.

Finally, do you have your speeches ready in case you win a Grammy?
RT: [Laughs.] That seems very far-fetched.

HC: Not really in the cards, now, is it?