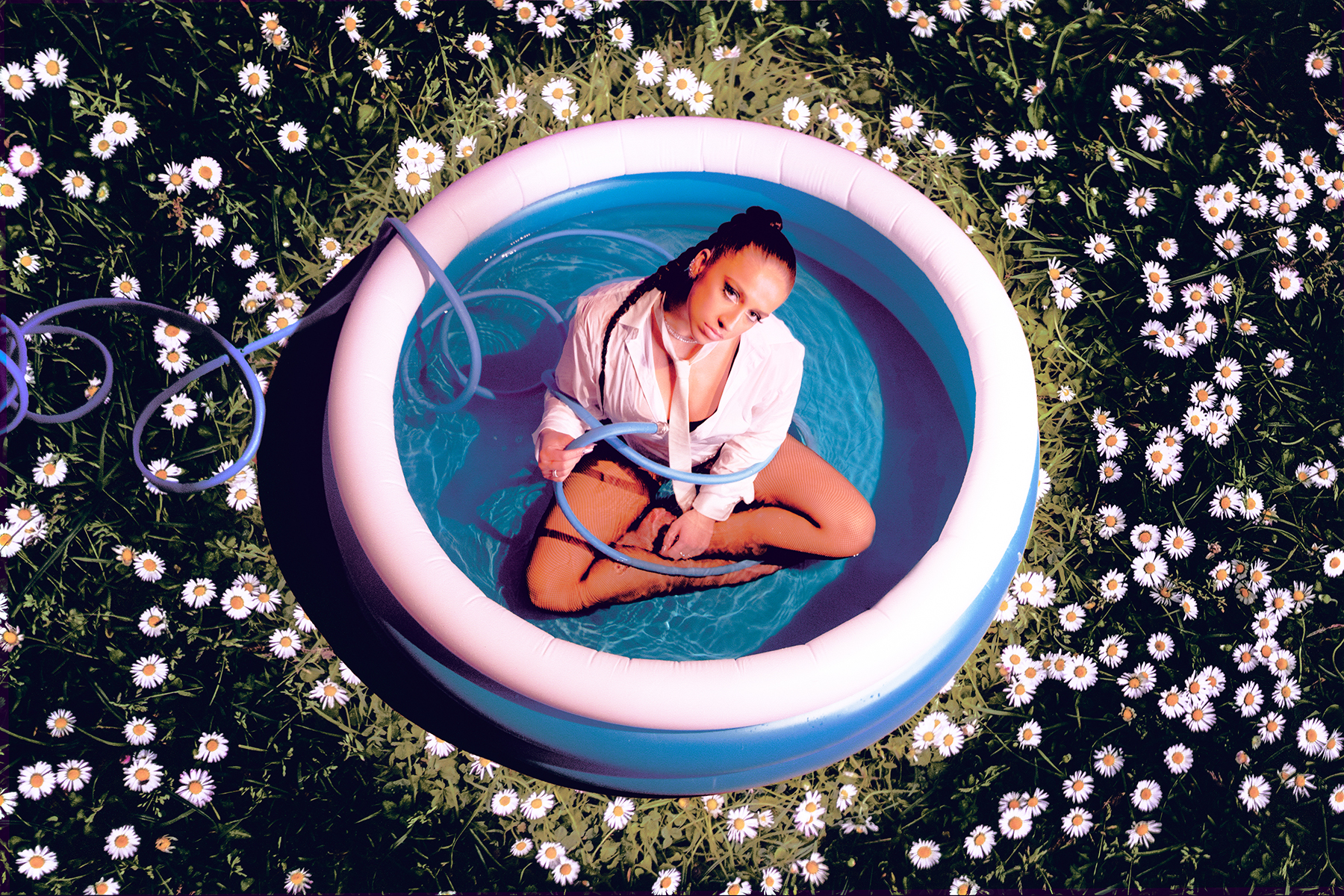 Tate McRae went through a “full identity crisis” as she entered adulthood and slowly learned that life isn’t always as pretty in pink as she once saw it as a kid. And with her new album, I Used to Think I Could Fly, out Friday, she squeezed all of the emotions she’s felt throughout the past few years as she’s navigated life’s changes into 13 songs.

“When you’re younger, life seems very easy and anything seems possible. You live with no fears and no insecurities,” she told Rolling Stone from her L.A. apartment last month. “And then you grow up and a lot changes. That’s the whole concept of this album: getting hit with harsh reality.”

As fans got to know the singer — via viral songs like “You Broke Me First” and “R U Ok,” and through her recent sold-out tour — McRae experienced the growing pains of moving to a new city and into her first apartment, finding new (real) friends, and writing her first full-length project.

“A lot was changing all at once,” she says. “But today, I honestly feel better than I ever have before. I have the right circle around me now. It’s hard to find those real people that are going to tell you the truth about things and not just feed you what you want to hear.”

McRae describes her LP as a “really beautiful rollercoaster of emotions” that encapsulate the heartbreak and pain she’s faced with a vulnerability she’s never shared before. “I’m terrified because I don’t open up that much to people in real life. I have a hard time trusting people,” she says. “People wouldn’t see all these sides of me if they were to just meet me in person. I think that people are going to really get an inside look at what I’ve been going through as an 18-year-old.”

Zooming Rolling Stone from her bathroom — the room in her home with the best lighting, she says — McRae breaks down, in her own words, five songs off her upcoming album, from working with Charlie Puth and Finneas to writing a song the night of a devastating breakup:

I feel really proud of that one. It was a concept I was really scared to talk about. I don’t think anyone likes to admit the feeling of jealousy. But it’s also something that everyone goes through. People don’t even realize how bad their mental health is getting when they’re just scrolling on Instagram or Tiktok for hours. I think it’s really cool because a song like that — that you can hear in concert, where the energy is so high and people are jumping and people are screaming — came from a really vulnerable place of me feeling super insecure and feeling like I could be anyone else in the world, just not myself. I walked into the session being like, “I want to be heard.” I feel like you pick yourself apart so much and you think that everyone else has these glamorized lives. I even take a second to look at my own Instagram sometimes and you’re painting your life out to looks so much better than it is. The song started as a ballad. Greg Kirsten was in the room with me and he started off with these really simple piano chords. It was a really heartbreaking song at first of me describing the perfect girl and everything that I wasn’t, and then eventually it ended up turning into a punk song. It’s so cool how a song with that much meaning and depth to me can be a full-on rock song at a concert.

I recorded this song the night of a breakup. My incredible producer Blake Slatkin, he’s a genius, calls me and he was like, “Are you okay?” I was like, “Yes, I’m okay.” He was like, “Get over here right now. You’re gonna write a song.” I was like “Oh no no.” I was a disaster. And he was like, “No, you need to get this off your chest.” And so I come over to his house, it’s like 11:30 pm, and I start writing “Hate Myself.” I was sitting on this beanbag sobbing — literally sobbing my eyes out. And then he gets me to sing the song, and I just start cutting the song as I was trembling. It’s really special because on the record you can hear my vocals breaking. A lot of people write songs and always put themselves as the victim, and don’t take a second reflect on themselves in a relationship. Obviously, every relationship is a two-way street. I think there are so many things that you can always work on. For one moment there, I was looking at myself and blaming everything on myself. That’s also one of the worst feelings ever: taking the guilt on of thinking that you weren’t good enough for them. That’s how I wrote that song. And that’s why it’s really special to me because I feel like it came from a super vulnerable place.

This song started off as six or seven minutes long. I had this one line: “Just tell me that you’ll let her go before you look for someone new.” And I came into the session with this line. And I’m like, “I need to talk about wandering eyes in a relationship!” So many guys are in a relationship and start looking for other things right in the middle. And I’m like, “Just let a girl go! Let her live her own life and not get attached to you and realize that you’re not in it 100%.” I painted out this really heartbreaking story of a hardcore girl who didn’t let anyone past her wall. And then this one boy, Boy X, is basically the only person who can get to her and the only person who can make her fall in love and she doesn’t usually fall in love. But she falls really fast and really hard. And by the end, his eyes start to wander. Then at the end of the song, it reveals that this girl was me. It’s just a really special song that I and Alexander 23 wrote in a garden. It just feels really personal and beautiful. Alexander is a really good friend of mine. I love him. And it was one of our first sessions ever writing together. It was really interesting because as we were describing this like girl he was like getting to know me at the same time. I was breaking down all my personality traits and putting them into a song. He’s got a crazy ear and a gift for melodies and lyrics. The two of us work really well together and there’s no judgment ever.

This is the most sensitive song I’ve ever written. There’s something about it that feels so classic, so timeless. And I think that was mostly Finneas’ little touch that really brought that out of me. It made me write the song differently. It’s really interesting, because this is one of the only songs where I have a very vivid image in my head. The lyrics in the chorus are, “I couldn’t say much. I was distracted. You seem so anxious like you had something to hide. Tell me it’s nothing. I don’t believe you. I know that look you get when you’re about to lie.” And I think there’s something about having a gut intuition when someone’s lying to your face and not telling you the truth that’s so brutal, because you never know the truth. You never know if someone’s telling the truth. That was a really heartbreaking line, because I remember looking into someone’s eyes, and they did this one thing with their eye that, every single time they would lie, I was like, “I know you’re lying, because you’re bad at hiding it.” I could so vividly picture it turning into like this really big classical beautiful ending to this movie. I was FaceTiming with Finneas and he’s like, “What do you want it to sound like?” And I was like, “I want it to sound like credits are rolling down, like at the end of a Hollywood film.” And he just turned it into magic. First try, I had no notes. I was like, “It’s perfect. Don’t touch it. Don’t add anything more. Don’t do anything less.” That doesn’t happen very often.

“What Would You Do”

I wrote this with Alexandre 23, Charlie Puth, and Blake Slatkin. This was my first time ever writing the Charlie. Alex was like, “Hey, do you want to hang out? Let’s just go to my friend’s house.” I was not expecting to write this day. We drive over and Charlie is doing his thing, playing a million instruments, going crazy. I was just watching him. And he starts writing. And I say, “I’m gonna write too. I have a lot to say. I need to get this out.” And so he was like, “Are we going to write about something real?” I’m like, “Hell yeah, we’re going to write about something real.” I started getting really really in my feels/ I was pissed off that day, which I’m usually not pissed. I’m pretty chill. But I was pissed. I was basically talking about the L.A. persona of someone who thinks they’re too cool for shit and their ego is so big that nothing can get in the way of that. I was really angry. We wrote this song, and I thought it was so fun and so angry and something I had never really written before. Charlie is such a genius. He’s so so talented. It was very cool to watch him work. He works a mile a minute. I was sitting there like, “What is going on!” [giggles]

This interview was edited for length and clarity.