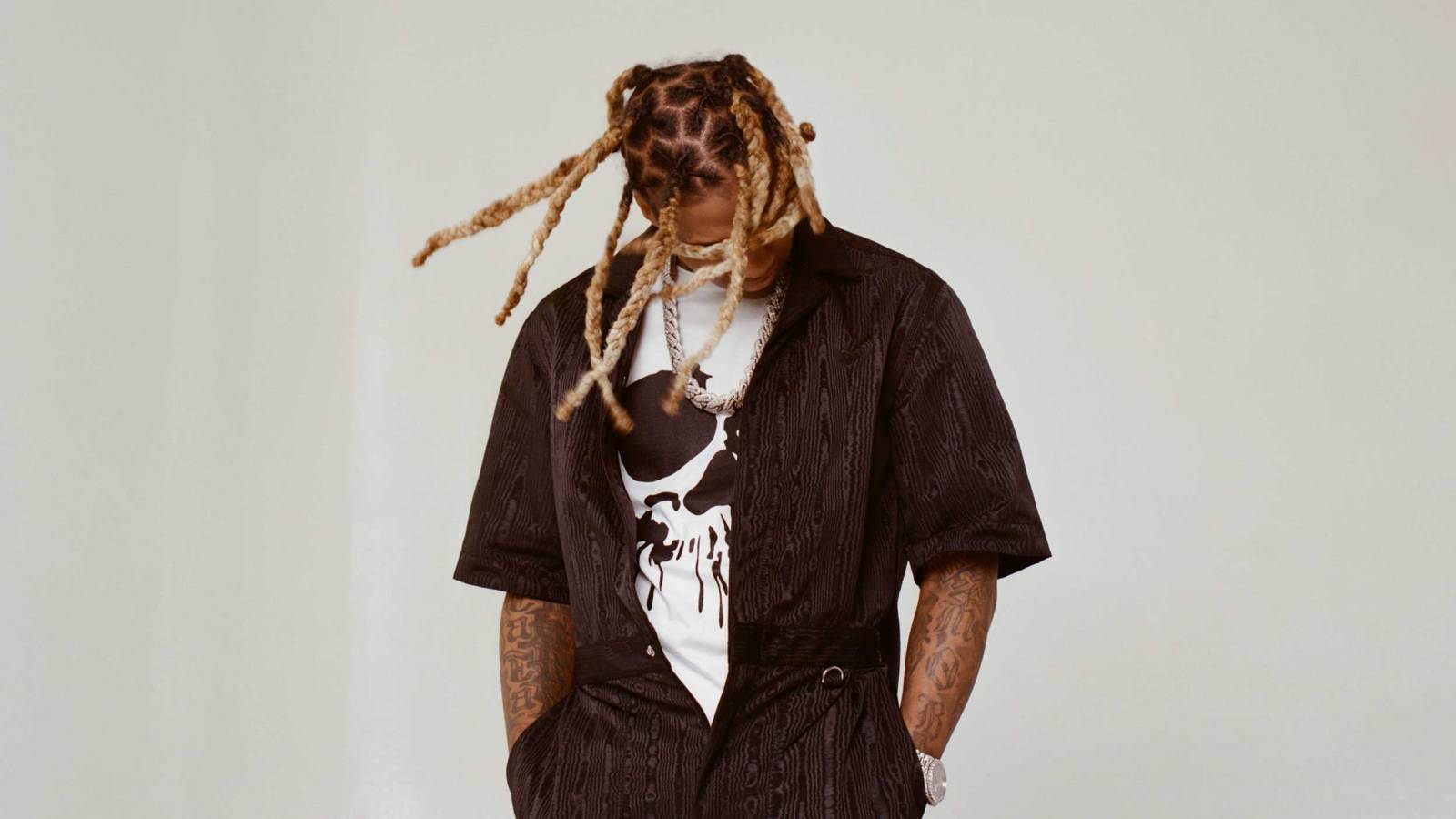 O
N A SHIVERY, star-filled evening in May, Durk Banks is surrounded by friends, family, and what feels like the entire city of Chicago as he prepares to take the stage for a sold-out show at his hometown’s United Center. It’s the final night on his 7220 tour, and it feels like a moment of hard-won victory for Chicago hip-hop and the much-criticized drill scene. “To be able to perform in Chicago and sell it out … that feeling was like something you can’t even explain, for real,” says the 30-year-old artist, better known as Lil Durk. “We never imagined that happening.”

The past two years have been a triumphant time for Durk, from his feature on Drake’s 2020 smash “Laugh Now Cry Later” to his own recent album, 7220, and the numerous gold and platinum records it has generated. But that time has also been stained by tragedy and controversy. Durk lost his older brother, Dontay “D-Thang” Banks Jr., to gun violence in 2021, less than a year after losing his protégé King Von the same way. And in Atlanta, where he resides, Durk spent much of this year facing felony charges from an alleged shooting in 2019. “I’ve been through a lot,” he says. (He and his team declined to speak further on the case; in October, the state of Georgia dropped all charges, citing prosecutorial discretion.)

Backstage at the United Center, the locker room where Michael Jordan famously sat on the floor and wept after winning the 1996 NBA championship is a joyous family reunion, with a thick aroma of cannabis to match the sweet atmosphere. Both of Durk’s parents, LaShawnda Woodard and Dontay “Big Durk” Banks Sr., are there, along with Durk’s then-fiancée; his late brother’s widow and children; multiple managers; several NFL-linebacker-size security guards; and a wide assortment of artists wearing diamond-studded chains with the logo of Durk’s Only the Family crew.

The night’s guest performers are a who’s who of Chicago rap, from newcomers Lil Zay Osama and PGF Nuk to peers like Lil Reese, G Herbo, Dreezy, Katie Got Bandz, and Calboy, all of whom give their own memorable sets throughout the show. Headlining the United Center is the chance of a lifetime for Durk, whose music has long been vilified by authorities for its supposed links to violence in the city, and he’s determined to share the spotlight. “It was something I came up with to be on some Chicago shit,” Durk says. “To keep the energy going, to give everybody another chance. When we were coming up, we didn’t have too many chances.”

He adds that the moral responsibility of his platform weighs heavier on his heart than ever before, as gun violence continues to afflict not only his generation of drill rappers, but Black youth in Chicago as a whole. “I’m going to start by getting the city together,” he says, “to do my part to slow down the violence.”

EARLIER THAT MORNING, Durk arrives at Guaranteed Rate Field to surprise nearly 20 boys from the C.H.A.M.P.S Male Mentoring Program as they watch the White Sox play the Angels from a lavish suite. The kids are the first class in a program intended to expose them to different career paths, including within the music business, and bring them to visit historically Black colleges and universities like Tuskegee University, Alabama A&M, and Morehouse University.

Durk, draped in a customized Sox jersey, walks toward the field with Kevin Freeman, the executive director of his charitable Neighborhood Heroes foundation, and OTF general manager Ola Ali so he can throw the ceremonial first pitch. “I got this rainbow [pitch],” Durk says, practicing a different throw from the one he tried at a similar appearance at a Cubs game in 2021. “Last time I tried to throw a fastball, but …” He shrugs.

After the game, Durk sticks around to sign autographs and talk to the kids. He’s all smiles as he speaks to the local media about why he’s here.

“We never had that growing up,” he tells an NBC 5 reporter. “We were looking for that type of guidance. I’m just trying to be different.”

He points at the crowd of boys: “How many of y’all is it?”

“That’s how many lives I’m trying to save today,” Durk says.

From childhood, education was something that Durk’s mother stressed. Since she herself had dropped out at a young age, she did everything she could for her kids to stay in school. The family — minus Durk’s father, who spent nearly 25 years in prison on drug charges — lived at the time in a three-story building owned by Durk’s grandmother on the South Side of Chicago,  along with his late cousin MacArthur “Nuski” Swindle. “My grandma is my main motivation, for real,” Durk says. “That was my mom outside of my mom. She was the one who took care of us when my mom worked and when shit was hard.”

Big Durk called often from prison, and Dontay stepped up as a father figure. But life got harder as the family watched Durk’s granny struggle with Alzheimer’s. “Sometimes I’d see her and she wouldn’t remember [who I was],” Durk says. “Shit would fuck with my mind.”

Though Durk ended up dropping out of Julian High School, his older brother graduated from Dunbar High School, and later pushed Durk to go back and earn his diploma, even as his rap career took off. “He wanted me to be smart, on top of my game,” Durk says. “Book smart and street smart.”

Since Dontay’s death, Durk has recommitted himself to that task, beginning the steps necessary to earn his GED. “D-Thang always told him to go back to school,” his mother says. “I think he wanted to do it for him.”

Durk began rapping around the late 2000s, founding OTF with rappers Chief Wuk and Lil Varney. In 2012, as Chief Keef was earning unprecedented buzz and controversy with drill songs like “300” and “Don’t Like,” Durk was heating up, too. His first local hit, “L’s Anthem,” broke through at hubs of Chicago’s Black-nightlife scene, like Adrianna’s, when Durk was 19. “They were in the studio that night and made ‘L’s Anthem,’ and they brought it to the club on this green Maxwell CD,” recalls Durk’s longtime associate DJ Reese. “I played the song, the crowd went crazy. He wasn’t even old enough to be in the club. The manager was like, ‘After you play this song, he’s got to go, OK?’”

The success of “L’s Anthem” got Durk a deal with Def Jam, but its lyrics poured a tank of gasoline on the tensions between rival Gangster Disciple factions in Chicago. “You have a little bit of success with a song, and everybody will come and attack you,” DJ Reese adds.

Durk’s momentum was slowed that same year by a three-month stint in jail for a gun charge. Today, he says his mind-state was dark and chaotic then. “Unfocused, lost,” Durk says. “Thinking about gangbanging. No type of leadership within me, or around. But I don’t regret nothing from the past.”

A few years later, in 2018, Durk parted ways from Def Jam amid a career downturn and challenges, including the murder of then-manager Uchenna “Chino Dolla” Agina and a shooting that nearly took Dontay’s life. These difficulties turned out to be the prelude to a new era for Durk, as Ali and Andrew “Dilla” Bonsu entered the fold as his co-managers and Durk signed a new deal with Alamo Records. Ali and Dilla helped him relaunch OTF as a fully-formed record label, signing a slew of local artists, many of whom had been around since the start of Durk’s career — as well as helping him branch out with investments in real estate, restaurants, a motorbike company, gaming, NFTs and more. As Durk reemerged, his songwriting improved and the themes of his music became more personal and relatable to his fans, earning him the nickname “the Voice.”

“He mastered his craft,” says Wuk. “That’s the definition of hard work and dedication. Bro’s wealthy as hell and he’s nowhere near comfortable. That man eats, sleeps, shits, and breathes the studio. He’s really striving.”

7220 is Durk’s most painfully honest album and his magnum opus, summing up the forces of happiness and tragedy that have shaped his life. Yet even as his career has risen to new heights, Durk has been embroiled in a number of potentially dangerous feuds in music and on social media — with various Chicago rappers, 6IXN9NE, and YoungBoy Never Broke Again, among others — and he continues to wrestle with the uniquely maddening grief of having lost so many friends and family before turning 30. “Even if you do 99 percent of shit right, you still got 1 percent of the demons with you,” Durk says. “You get angry fast and one reply can fuck up a billion dollars.”

He emphasizes his commitment to helping end gang violence: “That’s why I’m not saying names no more [in my music],” Durk adds. “I ain’t speaking on the dead no more — none of that.”

This mentality shift has been particularly important since losing his older brother, who was tragically gunned down last year at an after-hours club outside of Chicago as Durk was wrapping up a show in Orlando. After that loss, Dilla recalls reminding the artist that his own life means a great deal. “Durk means so much to so many people,” Dilla says. “We’re not gonna let him fuck up his career.”

Despite everything he’s been through, Durk says, he’s focused on earning generational wealth and giving a better life to his family, including his six children. “I’m not chasing death no more,” Durk says. “I’m chasing a billion dollars. I want our kids to grow up safe and sound, to be able to have fun, to have a real life.”