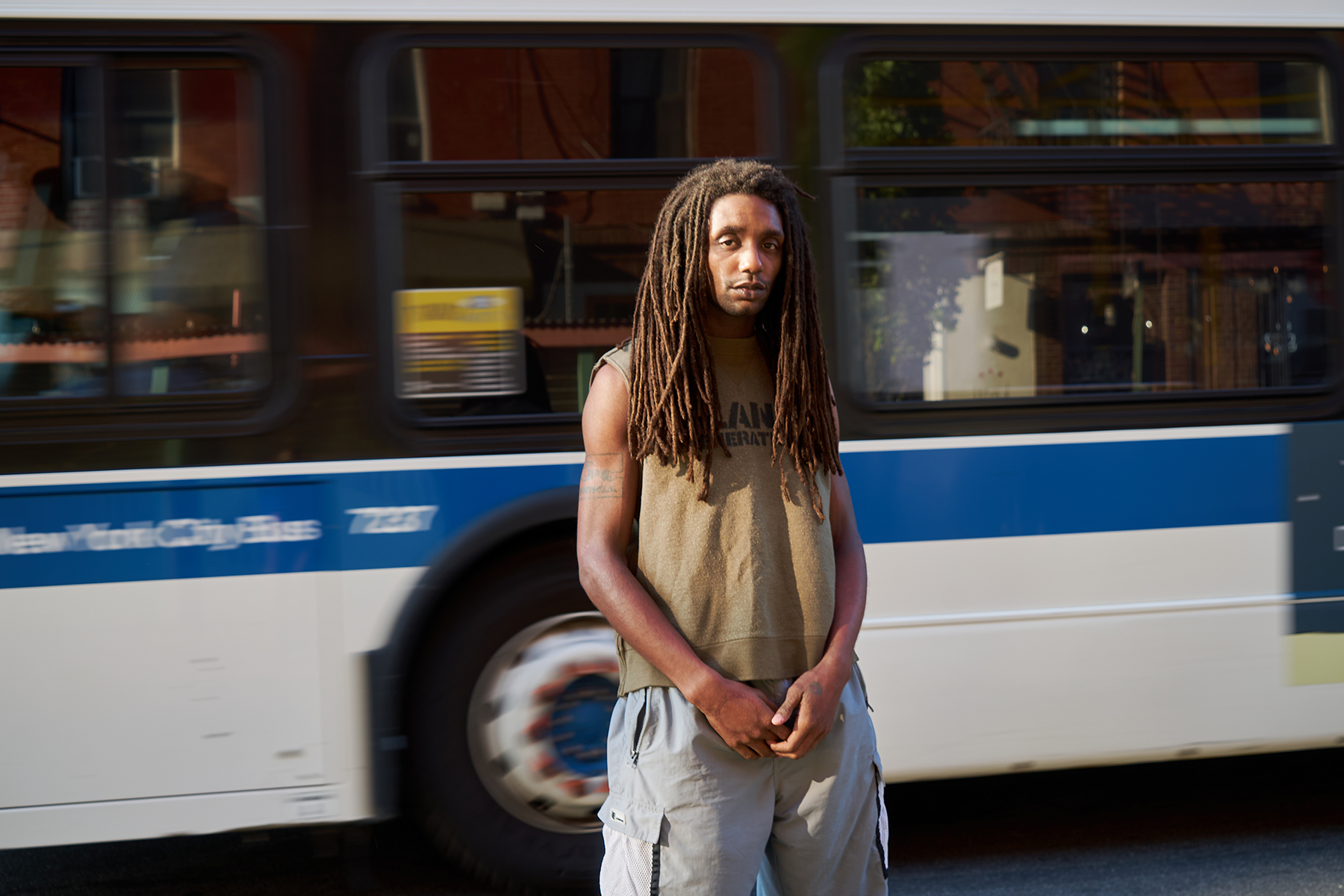 All humans are comprised of contradictions, and multimedia artist Dirty Bird is self-aware of his. He’s a Twitter-famous internet personality who doesn’t want to be known for his online persona. He’s a jazz-laden dance music producer who wouldn’t describe his own music as jazz. He’s a capital-A Artist who’s frighteningly successful at every artform he gets his hands on, but he wouldn’t say he likes to actually do any of them.

Known to many as Gum — a moniker he uses to substitute for a government name, and which also serves as the title of his animation studio — the 25-year-old Virginia Beach beatmaker has ricocheted effortlessly from gig to gig in recent years, working as an illustrator, a video collagist, a middle-school teacher, and a music producer and DJ. His charming unpredictability is part of his appeal. “I absolutely do!” he says, laughing, when asked if he has commitment issues. “Don’t even get me started on that.”

As a musician, Dirty Bird’s Afrofuturistic approach to dance music honors the vintage rhythms of jazz and funk through the lenses of house, jungle, and garage. His 2020 Halcyon Palace EP and 2021 Time Traveler and N—- U 24 It’s Time 4 Jazz albums are just a few of the projects that exemplify his idiosyncratic versatility. Dirty Bird’s method of using rare vocal samples to drive dance-music melodies has led to an output of evocative, introspective, yet completely groove-inducing tunes. “I like making weird fucking drum-and-bass-jazz-fusion shit that’s absolutely not gonna get played on the radio,” he says. That makes his newest project, Wagenmusik — an EP out July 14 that diverges from his usually esoteric sound to make a more accessible kind of dance music — all the more surprising.

For fans, the myriad of mediums he dabbles in have all advanced his artistry in a way that validates his self-described God complex. “If there’s any person that should have a God complex, it’s him,” his frequent collaborator Swami Sound corroborates.

Twitter friend and event promoter Kiska Kasparov first discovered Dirty Bird in 2018 through high fashion twitter, when he posted a since-deleted photo of himself in a crisp white button-down, red plaid schoolgirl skirt, and chunky black-leather ankle boots. Kasparov thought he had a nice sense of style and noted that, at the time, he’d only been doing studio art as an undergrad student at New York University. “I remember one day he tweeted, ‘I’m going to make music,’ and he did,” Kasparov recalls over Twitter DM. “You can tell his heart is in everything he does and it makes me want to support.”

When Kasparov threw their first “cowgirl rave” on July 30 of last year, Dirty Bird was the first person they wanted to book. People from around the country who had “met” Dirty Bird through Discord and Twitter flew to Austin just to watch him spin.

It seems to be a running theme that fans’ support for Dirty Bird doesn’t stop at the web. Everyone who engages with him wants to contribute to his success. Dillon Eldin went from sporadically direct-messaging Dirty Bird to photographing him DJ at his multimedia community Gumfest events around New York City. The photographer laughs as he admits he was first drawn to Dirty Bird’s Twitter personality, knowing full well that’s the last thing the artist would want to hear.

What kept Eldin immersed in the community was Dirty Bird’s commitment to sharing his knowledge. “Music is inherently educational, [and Dirty Bird is all] about that positive educational mentality,” Eldin says. “Because he was also a teacher, which is also really cool.”

Ironically, Dirty Bird’s art career would have never begun if it weren’t for a rescindment of an acceptance letter from Stanford University after he tweeted something he recalls as being along the lines of: “Yo. Just got into Stanford. Everybody can suck my dick from the back! I’m a fucking genius.” (His old account got suspended after that, so the exact wording is lost to time.) After some scornful school assemblies and headshakes in Roanoke Rapids, North Carolina, his hometown, he accepted an offer from NYU to pursue a bachelor of fine arts degree in studio arts.

Dirty Bird learned to produce music in the summer between his junior and senior years of college, but after graduating in 2019, he returned to Roanoke Rapids and became a civics and economics teacher at the local middle school. During his one-year stint there, he used Twitter to raise enough funds to purchase supplies and established the school’s first art class. He also sat on the city’s art council before realizing he would have to be on the board for three or four years before making any substantial change.

As a Black Liberationist and ex-activist, Dirty Bird now sees his existence as a self-sufficient artist as a revolutionary act in itself. “I’m learning to take small victories on a day-to-day basis with my current lifestyle, as opposed to looking for some kind of watershed moment to mark my ‘you did a good thing’ [checkbox],” he says. “Now I’m doing multiple small things that are building up to where I can say I lived a life that was indicative of my beliefs.”

Whether he’s using his platform to share documents on how to pirate everything from design software to films; educate folks on dance music’s Black history; or uplift fellow Black artists, Dirty Bird’s work isn’t just about himself — it’s also about the community around him. Fellow Eldia collective member Dazegxd recalls Dirty Bird sending him a DJ controller as a gift, as well as offering them their first live DJ gig. “[Dirty Bird] is half a mentor, half an uncle to me,” the 20-year-old says.

While Dirty Bird says music isn’t his whole life, there are few topics that excite him more than when asked about Moodymann, the Detroit house legend who Dirty Bird considers his musical hero. “Oh, God. Everything — EVERYTHING I know about music I learned from him,” he gushes. “It will be impossible for me to overstate the impact that his work has had on me as a person, both spiritually and creatively.”

Dirty Bird sits on Zoom in front of his record player, which hosts a Moodymann vinyl disc as we speak. “The most important part of the music listening experience is not when you’re sitting down with your headphones on, but [when] you’re just thinking about it,” he adds. “That is the level of engagement that I’m fascinated with the most, because my biggest epiphanies about music come when I’m not listening to any music at all.”

With an archivist approach to art, a background in activism, and a degree in fine arts, it’s no surprise Dirty Bird believes critical thinking is the most important skill an artist can have. But he emphasizes that you don’t need a degree in theory to practice critical thinking skills. “[What] I’m talking about is more of an organic thing,” he says. “Ask questions, evaluate the answers as you receive, hold them in contention with your own personal lived experience, empathize with others, and envision multiple truths about what you’re being presented with.”

Dirty Bird is able to identify the art in every aspect of life, whether it’s discovering a beat in the rhythm with which he washes the dishes or a simple joy in a serendipitous moment. He finds cosmic beauty in the minutiae of life in the same way he stumbles upon samples in an old record from a random high school jazz band. For him, sampling is breathing new life into art. He notes that most of his collection consists of rare records from other countries he found on either eBay or a website he’d rather not divulge. “You take on so much responsibility when you archive that person’s work,” he says. “It takes on a whole different philanthropic meaning when you consider the socio-economic status of that music and being able to digitize the work or archive it forever.”

Amplifying the recent buzz around the Swami Sound-led NYC garage scene, Wagenmusik is an approachable, blues-laced interpretation of garage house and -step. Like the luxury BMW he drives to the beach to escape the solitary confinement of his apartment, Dirty Bird harnesses his connections with collaborators as a vehicle for creating opportunities and finding adventure. Just a few months ago, Dirty Bird and Swami Sound schemed to get international bookings, securing slots on stages at clubs in Montreal and Lisbon.

He sees this, too, as part of his passion for education. “I love DJing with [Swami Sound and Dazegxd] because they know more about certain music than I do and I respect them for that,” Dirty Bird says. “That’s something that’s not common in my work experience. I heard a lot of my favorite songs because of them.”