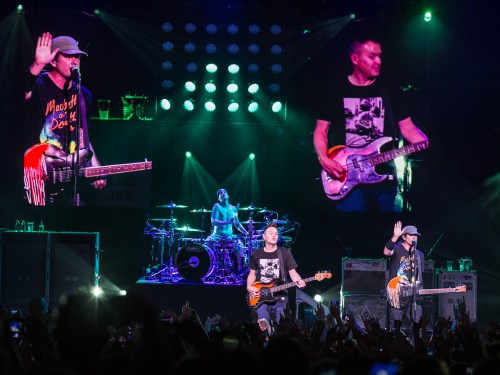 When the three dudes of Blink-182 were running naked on MTV back in 1999, it wasn’t necessarily easy to predict that the just-reunited trio would end up as one of the most enduring and influential acts of their generation – or that they would have one of weirdest, most dramatic behind-the-scenes sagas of any band you could name.

The band broke up just six years later, only to reunite in 2009, with DeLonge departing in 2015. They carried on with Alkaline Trio’s Matt Skiba in his place. Earlier this week, the band announced that DeLonge is back; they released the new single “Edging” and announced a new tour and album for next year.

As of 1999, guitarist/vocalist Tom DeLonge had already written “Aliens Exist,” but no one knew he’d become an important UFO researcher, or for that matter, that he would leak UFO videos that the U.S. government would acknowledge as authentic (and start his own band, Angels and Airwaves, who were not averse to similar subject matter).

Travis Barker survived a horrific plane crash in 2008, and would go on to become a key bridge between pop-punk and hip-hop, as well as an architect of our current rock revival, working with Machine Gun Kelly, among others. Mark Hoppus recently survived a bout with cancer, which DeLonge credited for putting their past disputes “in perspective,” apparently paving the way for their current reunion. When a fan joked on Twitter that the Earth would be losing its protector from UFOs, DeLonge replied that he planned to “save the Earth with dick jokes.”

In the new episode of Rolling Stone Music Now, Andy Greene joins host Brian Hiatt to discuss the reunion, the new single “Edging,” and the whole wild story of Blink-182. To hear the entire episode, listen on Apple Podcasts or Spotify, or press play above.