When Red Bull approached Jason Ikeem Rodgers, the founder and musical director of Orchestra Noir in Atlanta, about collaborating with Rick Ross for their global Symphonic series, the moment seemed like destiny. The project pairs contemporary musicians with classically trained orchestras, and Rodgers says he “grew up on Rick Ross.” When he was younger, he remembers spending two years driving around his native Philadelphia with a broken CD player that looped three songs. One was Ross’s 2013 Jay-Z collaboration “Devil is a Lie.”

“Rick Ross’s music helped me navigate my life and inspired me to be a boss,” he says.

On Friday night, he stood over his players on stage at the Atlanta Symphony Hall, and Rick Ross stood before him. For a split second, the room fell silent, and the lights went crimson before Ross leaned into the mic mischievously and called the devil a liar. Horns blared royally, the drums trudged with force, and after Ross delivered his last syllable, he turned to Rodgers, and they shared a proud nod.

Established in Atlanta by Rodgers six years ago after a globe-trotting, high-achieving career as conductor, composer, and arranger. He first became fascinated with classical piano in the 6th grade via Virginia T. Lam, a talented and attentive music teacher who grew into a mentor, then a mom, and now the production manager and board member of the orchestra. As a teenager, Rodgers would dart from freestyling with his buddies on Philly street corners to his piano lessons, feeling like a part of two different worlds. Now, his orchestra blends traditional symphony and Black pop music: Red Bull caught wind of them through their “Beethoven Meets 90s Vibe” show. “I feel like, for the first time in my life, I’m me,” he says. Tasked with translating an hour of Rozay’s discography into music for his orchestra, Rodgers says the song’s arrangement poured out of him. 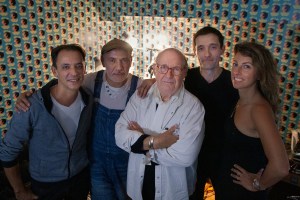 “This is the black caviar of hip-hop,” Ross said over Zoom after rehearsing the Thursday before the performance. “This is a great example of Black excellence.” He echoed the sentiment on stage the next night, where dozens of Black artists showcased the synergy between genres that could seem disparate but had coalesced in all their lives. First, of course, there was Ross, whose lush production made perfect fodder for the drama of an orchestra: “It sounds futuristic and classical at the same time,” Questlove once told him of his “Maybach Music” song series. But before Ross, there was Mapy, a classically trained solo violinist, a New Yorker by way of Paris, who’s played unmistakable hip-hop, reggae, dancehall, and Afrobeats hits. Sainted, an incredible choir performing trap music standards like gospel, followed.

Though Ross had never played with Orchestra Noir before the Symphonic, he was familiar with their work and had reverence for them. “I’m happy,” Ross beamed after Thursday’s rehearsal. Cameron Moore, a Savannah State University freshman, is one of several HBCU student musicians that joined the orchestra on Friday. Moore, who plays the trumpet, said the rapper energized the rehearsal. “We just got to playing the music, and then Rick Ross just pulled up out of nowhere, had a drink on stage,” she recalled. “Something just changed when he walked in the room.” Let Ross tell it, though, and he’ll tell you he was mesmerized watching the musicians work, flipping their pages and playing with focus. “I may have just had one or two things to tweak. And it wasn’t even with the orchestra. It was more about just small technical things.”

Sam Sneak — the DJ and A&R who works closely with Rick Ross — was Rodgers’ point person to gel his musical direction with their camp. “To be honest, I just laid back,” Ross admitted when asked what his role was in the process. “Whenever Sam’s involved, it always comes together.” Sneak has been collaborating with Ross for over a decade and had his own instrumental experience to call back on, too, from playing percussion in a marching band to a live band at a strip club. Nevertheless, sneak was enthusiastic about the Symphonic, partly because of its conceptual alignment with Ross’s sound. “He spits that luxurious… Ross could rap about a burger and make it feel like you eating steak, the finest steak, the elegance of the wordplay,” said Sneak.

While Sneak’s input was essential to Rodgers, Sam said it was vital for him to communicate to the Maestro that he trusted his vision: “Do everything you see fit, and from there, that’s how we going to rock out,” he remembered telling Rodgers. “Ain’t no cap on your creativity.” Sam got a first look at what the show would be at chamber rehearsal with half the orchestra in October, and he was more than impressed, especially with their rendition of “Hustlin, Ross’s breakthrough hit, the grit that came before the glamour.

“It’s just this thing where he has the trumpet sounding you’re listening to like a Dolby sound effect. It’s going from left to right,” Sneak said before the show, still mystified. “I was blown away when I heard it in rehearsal. I was like, ‘Oh yeah, we going to have a fucking ball.’” On Friday night, the rowdier anthems populated the latter part of the setlist, with — “B.M.F.,” “Bugatti,” and “Hold Me Back” were particularly explosive. When “Hustlin’” rolled through amongst them, its grand horns seemed to balloon across the room at the start.

Per his memoir Hurricanes, Rick Ross made “Hustlin’” as a newly signed but cash-poor rapper, having put his entire $30,000 advance towards the down payment for his first house whose mortgage he couldn’t afford. Ross found the breadth of the setlist inspiring, a robust curation of his career, from “Hustlin’” to “God Did.” “It made me just reflect,” said Ross. “And I appreciate everything I’ve done.” He can now add a Symphonic to his list of successes, having his music performed in a context Black people rarely have access to professionally. “For a long time, the statistic was with American orchestras, only 1.8% of American orchestras were African-American,” said Rodgers. “It’s been that way for years. I think it’s changed slightly, but probably not by much.”

Mapy — the French violinist who started the party on Friday — has been able to build an extraordinary solo career playing hip-hop, reggae, and soca on her violin. Still, the Symphonic was her first time doing so with an orchestra. She was set on this path around the age of 10 when she realized when she could play “Juicy” by Notorious B.I.G. by ear.

At six years old, she had begun studying the violin at her mother’s behest, a poor immigrant from Reunion Island, east of Madagascar, who could not read, write or play music herself but knew it would open doors. “I used to play in a symphony orchestra back in the day, when I was still in France, in Paris, but we were playing classical music, and that’s not really what I listened to,” Mapy explained Thursday night as she settled in her Atlanta hotel. “So, this show is a dream come true.” From Cameron Moore, the young trumpeter, to Rick Ross himself, many artists that performed that night felt a sense of alignment with the Symphonic, pulling together the different musical approaches they’ve been weaving together their whole lives.