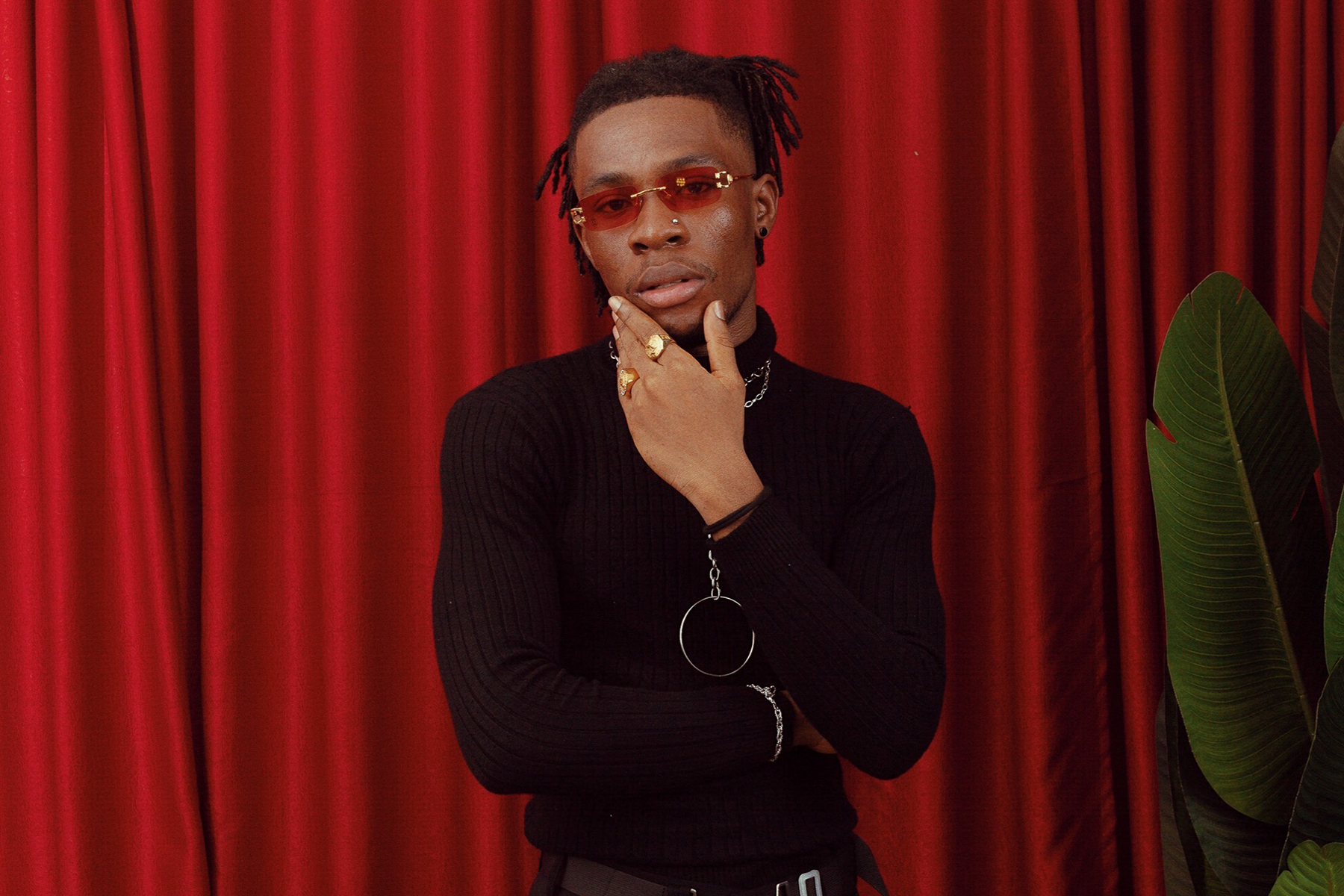 Just three years after he debuted with his single “Baby” — which topped charts across Africa and beyond — Joeboy is already approaching superstar status. The Nigerian singer’s warm, down-to-earth energy is all over his 2021 debut album, Somewhere Between Beauty & Magic, a beautifully dreamy celebration of love in its myriad forms. He continued his hot streak with last year’s “Sip (Alcohol),” which amassed more than 50 million streams in less than a month, and this year’s “Cubana.”

Joeboy’s songs capture the innocence of young love and the sting of youthful heartbreak. Although, it seems, we might be in for a changeup: “People might not be getting that lovey-dovey Joeboy in my forthcoming releases,” the 25-year-old tells me, “because I’m not on that wavelength at this moment.” We caught up with Joeboy as he embarks on his Young Legend Tour — his first ever headlining U.S. trek.

How have you been holding up on tour?
This is my first major tour in the U.S., and it’s been hectic. I’ve been traveling back to back, and at some point, it took a toll on me but I’m used to it now. It’s been really fun connecting with people from different parts of America, and it just shows how far Afrobeats is going. Sometimes one can feel skeptical about visiting a new place to perform and you don’t know if they know your music. But for people to show up in their hundreds and thousands, singing my songs word for word — it’s just beautiful. It’s as though they are way more excited to see you than you think. It’s so beautiful, and I’m having fun. I miss Nigerian food though [laughs].

Yes, this is your first U.S. tour. Are you enjoying it?
It’s great. I’m having the time of my life. Once I’m done with the tour, I can’t wait to get back in the studio and write down and sing out all these experiences. They give me plenty of ideas. I’m meeting a lot of people — special people. It’s such a fun experience, and I feel it’s something every artist should do.

Let’s go back a little. What first got you hooked on music?
When I was way younger, I was always excited about seeing what was going on outside. But, I mean, where would a seven-year-old be going? [Laughs.] I have two older brothers and one older sister. My older brother was in the choir and he played the bass guitar, so I just used to go with him and watch. So I started listening to a lot of gospel music then. But I think the major influence was from my elder siblings. They played a lot of Nelly, Boyz II Men, Sean Paul, and Destiny’s Child. Then, in my teenage years, I used to watch a lot of music videos. I was just really interested in the idea of music, but I didn’t think I was going to be a musician. My brain at the time was like a music library. But becoming a musician was like my destiny. I had a friend at the time who started making music, and I remember going to the studio to just have fun. Then I recorded a cover of Ed Sheeran’s “Shape of You” and it blew up on Instagram. That was what properly introduced me to the music industry.

You’re part of emPawa Africa, an incubator program that funds music videos and provides career guidance for young artists, founded by the artist Mr Eazi. How did you first meet him?
I met Mr Eazi in 2017. I was reading for exams in Unilag at that point. Then I got a message from a friend that Mr Eazi had just commented on my Instagram page. I honestly thought my friend was lying because it sounded so impossible it was funny. I checked the account that commented, and I knew it was real, like he actually commented on my post. I was thinking about what to say, and immediately I got a DM from him saying he loved my sound and everything.

The next thing, he dropped his personal phone number. It was shocking. Straight up, he asked me if I wanted $5,000 or to make a song and shoot a video that he’d promote. I didn’t even have a bank account. Most people told me to just collect the money because, really, he didn’t owe me anything. So I called him and told him that I’d rather make a song and shoot a video. That song was “Faaji.” From there, he spoke to me about the emPawa foundation and told me to apply, and I did. I was like Top 10, and that was where I got the money to shoot “Baby,” and before you know it, it blew up. There and then, we decided to have an official agreement, and it’s been really good.

Your first single, “Baby,” remains one of Afropop’s biggest songs of all time. What do you recall about your first experience in the studio with that song?
While I was writing “Baby,” I was depressed because I was in my final year at uni. There was this pressure of what I wanted to do with my life after I finished school. And I used to be scared of the idea of a nine-to-five. My spirit does not align with that type of rigid lifestyle. I knew I would have to do it if I needed to, but it wasn’t something I was excited about. So that came up, and I was just praying to God that this music thing works because I just couldn’t do a nine-to-five.

After I finished writing “Baby,” I took it to the studio to record. Then I sent it to Mr Eazi, and he loved it. By that time, we had already started talking with a Ghanaian artist and we were about to shoot a video for the song I made with him. I called Mr Eazi and I told him I didn’t want to drop that song with the Ghanaian artist anymore, and that I’d rather drop “Baby.” We dropped “Baby,” and it blew up beyond our expectations. I assure you, nobody saw that coming. I knew the song was great, but I didn’t see it being that big.

Since 2019, how has your sound and message changed?
I think this is one of the most important phases of my career because people might not notice it right now, but in some years’ time, they’d understand. For me, my sound is evolving and becoming edgier. There are some things I normally wouldn’t talk about in songs in 2019, but now, I can openly talk about these things with my chest. I think my music is becoming more multifaceted.

A lot of songs on your debut album come from an incredibly vulnerable place, be it from a past relationship or you longing for something new.
At that point, I was really into the idea of love. I tried to make those love fantasies and experiences into songs because that was what I was on at that moment. I think that’s one of the best ways of making music — when you make music based on the way you naturally feel. People can relate and connect because it’s legit, and that’s where I’ve always tried to be, and it usually works for me. But right now, I’m just living life and feeling myself [laughs].

You describe your latest single, “Cubana,” as probably the most playful song you’ve ever released. What was the creative process like?
We were just in the studio, vibing. The plan was to even make a heartbreak song. I didn’t write this song — it was just on the spot. I was feeling that way at that particular point so I decided to put it up.

What does it mean to be an African pop star and a “Young Legend”?
Being an African pop star for me means visiting different African countries, and realizing that they actually know my music word for word, and also touching people in different parts of Africa. Sometimes I’m in Zambia, Zimbabwe, Kenya, and Ghana, and it just feels like I’m in one big country and people know my music throughout Africa. That’s what it means to be an African pop star. Me calling myself a young legend is me saying that I know that I’m going to be a legend. I know there’s so much greatness for me ahead, and so I’m just speaking it to life. People sometimes be like, “Watin you don do wey make you dey call yourself a young legend?” I’m the only one that knows what I’m seeing, so I don’t expect anybody to understand. It’s just so funny that people are always against you when you big-up yourself. Honestly, there’s so much greatness ahead of me, and I can’t wait to show the world.