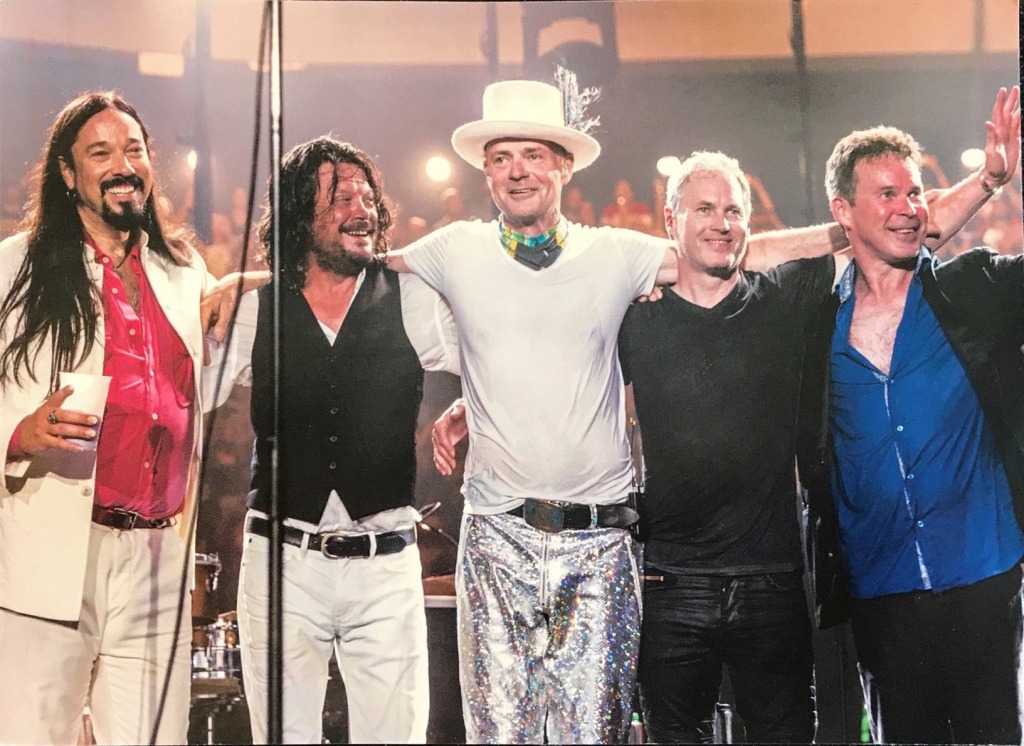 When the Tragically Hip played their final show on Aug. 20, 2016, at the sold-out Rogers K-Rock Centre in the group’s native Kingston, Ontario, bassist Gord Sinclair stood onstage in awe of the moment — wondering what the future held for the larger-than-life Canadian rock band.

“There was a deep connection with the people, and as we progressed on that last tour, [lead singer Gord Downie] got stronger and stronger. By the time it got to the last show, it was just like, ‘We should be playing more,’” Sinclair tells Rolling Stone. “It was the audience, it was the power of the music — that very real, emotional connection between the group, the performance, and the audience.”

Sadly, that night in Kingston — nationally televised on the Canadian Broadcast Company (CBC) to a viewership of millions — would be the last time Sinclair, Downie, guitarists Rob Baker and Paul Langlois, and drummer Johnny Fay would perform together.

“When we played that last show, our entire career came into focus — everything that we’d been through, being in the band, and then we did this cross-country tour [to say goodbye],” Fay says. “And then, the very next day, this tempest moved in and just washed everything away, putting everything out of focus.”

Downie, the band’s charismatic lead singer, was diagnosed with terminal brain cancer in 2015 and revealed the news in May 2016. The Hip embarked on a final tour that culminated with the curtain call in Kingston, Ontario. A little more than a year after that performance, Downie succumbed to his illness on Oct. 17, 2017. He was 53.

“My dad did an interview the day after Gord died, and one of the things he said turns out in hindsight,” Langlois says. “The question was, ‘What do you think it’s going to be like for the guys? Are they going to keep doing music?’ [My dad says], ‘They’ll keep doing music, but their heart will never be in it.’”

Arguably Canada’s greatest rock band, and one of its most cherished musical exports, the Tragically Hip transcended what it meant to not only entertain and embrace an audience, but also the ability to harness the sheer power of rock & roll — this force of nature for positive, tangible change contained in their lyrical aptitude and live-wire stage presence.

“We had to be engaged. I always felt my job was to have a better time than anyone else in the building,” Baker says. “And if I have a great time, other people are going to have a great time, and I think everyone [in the band] approached it that way — it was a great rollercoaster ride onstage.”

Since Downie’s death, the band had only reunited once, backing Canadian indie-pop singer Feist during the televised 2021 Juno Awards. Performing in an empty Massey Hall in Toronto while Covid-19 protocols were in effect, the ensemble ran through the Hip’s “It’s a Good Life If You Don’t Weaken,” a nod to the group being honored with the Juno Humanitarian Award that night.

“It’s all very familiar, very long-standing friends. It’s just a comfortable place to be with those guys,” Baker says in reference to being onstage with his bandmates again. “You slip in like no time passed and you carry on as if you were hanging out the day before. That’s kind of the way we are.”

The band’s remaining members recently surprised everyone by reuniting once again. This time at the National Arts Centre in Ottawa on Sept. 16 for a tribute to Buffy Sainte-Marie, the massively influential singer-songwriter and Indigenous artist.

“[Tonight] was a really great, healthy step to playing again,” Fay tells Rolling Stone after the performance, taped for broadcast on Sept. 30. “And it’s important for us to do that. It honors the legacy of the band, it honors Gord. [He] would have been heavily involved in [tonight].”

Backing rising Indigenous singer-songwriter William Prince, the Hip soared through Sainte-Marie’s 1964 protest song “Now That the Buffalo’s Gone.” The concert, Starwalker: A Celebration of the Songs, Music, and Life of Buffy Sainte-Marie, aired nationally on the CBC as part of the second annual National Day for Truth and Reconciliation — Canada’s holiday to recognize the brutal legacy of the Canadian Indian residential school system.

“The Indigenous issue bugged [Gord Downie] since he was a kid. We weren’t really educated about it [at the time], but it bugged him,” Langlois tells Rolling Stone backstage at the NAC. “He would bring it up, even as teenagers, ‘There’s something wrong up there. We should all be friends and they should have the same chances we do.’”

From a young age, Downie felt the profound urge to stand up for those who faced injustice and felt voiceless, something that led to his lifelong crusade, personally and professionally, to fight for the Indigenous people of Canada and shine a spotlight on the atrocities committed against them.

“Gord was in the music scene in Toronto and got involved in [environmental charities] at first. He gained a lot of experience on how to get things done, what to focus on, how to write about them, what to say,” Langlois notes. “He read a lot and he observed a lot. There was certainly a Canadian bent to [his words], but a lot of the time he was looking for a problem, not celebrating.”

“I think it was Gord’s natural bent, lyrically. He was never a soapbox guy. He was an art guy. He was an activist through poetry,” Sinclair adds. “He was a brave guy. When he saw something that was wrong, he’d stand up. During our travels, he was meticulously taking notes — some of them became poems, some postcards to the kids, a bunch of them became songs.”

In the five years since Downie left this world, there’s been a lot going on in the Tragically Hip inner circle. In June, the recording Live at the Roxy: May 3, 1991 was unleashed, with the 30th anniversary rerelease of the Hip’s seminal album Fully Completely to hit the streets this fall, which includes a one-day screening of the band’s 1993 tour documentary Heksenketel in select Canadian theaters on Oct. 5.

The Tragically Hip officially formed in Kingston in 1984 when childhood friends Sinclair and Baker met Downie in high school and eventually left their respective bands to cement the nucleus of the group. Fay and Langlois joined soon after. Backed by a meat-and-potatoes rock band, Downie proved to be a vulnerable songwriter whose rough edges and devil-may-care attitude combined aspects of fellow Canadian legends Neil Young, Joni Mitchell, Leonard Cohen, and Gordon Lightfoot.

Word spread quickly about the group’s mesmerizing live shows, but winning over American audiences proved difficult. Still, they played big arenas back home and managed to earn a following north of the I-90 corridor in the States, always working to grow their audience no matter how small the venue.

“We always had that giant killer mentality from our life on the road. We learned how to play the small rooms. We always aspired to greatness,” Sinclair says. “We played a lot of empty rooms on a lot of empty nights. So, you learn a lot of humility, especially being in Canada. You don’t take anything for granted. You learn how to play on a Tuesday night to a half-empty crowd.”

The Tragically Hip gained some international prominence with an appearance at the ill-fated Woodstock ‘99 as well as a 2002 performance for Queen Elizabeth II when she visited Canada. In total, they would collect 17 Juno Awards, including Entertainer of the Year and Group of the Year, with three wins in each category. Nine of the band’s albums reached Number One on the Canadian charts, alongside numerous radio hits. They were the biggest selling band in Canada from 1996 to 2016 and remain popular on streaming services.

“It’s obviously very heartwarming, and also very sad to listen to us as young men, hearing Gord’s voice, and remembering those days, how fortunate we were to have each other,” Sinclair says of the Live at the Roxy release. “We were a tight band, and Gord was just wicked.”

At the NAC appearance for Sainte-Marie, a film crew was onsite to follow the band. Spearheaded by Downie’s brother, filmmaker Mike Downie, the footage will be part of an upcoming documentary series on the Hip, expected to be released on Amazon Prime in 2024.

Mike and the rest of the Hip are also heavily involved in the Gord Downie & Chanie Wenjack Fund, which, according to its website, “aims to build cultural understanding and create a path toward reconciliation between Indigenous and non-Indigenous peoples.”

“I’m in the ‘never say never’ camp,” Sinclair says when asked if the Hip may get back together down the line. “But the Tragically Hip’s not the Tragically Hip without Gord, you know? And, if I were gone, I’m sure Gord would say the same thing about me.”

“I wouldn’t rule out another chapter,” Langlois adds. “It’s crossed our minds that we could jam. It took us a while to process [Gord’s passing]. And we’re still processing, but the mood’s good.”

Sinclair says that the quartet still meets up at its long-time recording studio, the Bathhouse in Bath, Ontario, every so often, and routinely hang out in-person or for business meetings over Zoom.

“They’re my best friends,” Sinclair says. “Even though [Gord’s] gone, even though the band isn’t together anymore, the music still has a really strong resonance with people that’ll hopefully never go away. If we were to do something down the road, if it was at the right time and right place, for the right charitable organization, I would do it in a heartbeat.”

The morning after the Sainte-Marie celebration, Baker is sitting on a couch in a room at the Fairmont Château Laurier, a stone’s throw from the National Arts Centre. The luxury hotel is a far cry from those early days of the Hip not being able to afford a motel room on tour, ricocheting from coast-to-coast in an old van, thousands of hard-earned miles across the vast, unforgiving landscape of Canada. But he doesn’t spend much time thinking about the group’s legacy.

“That’s for someone else to decide. We’ve written these songs, we’ve raised them, and we’ve sent them out into the world on their own,” he says. “Some of them are going to have nice, successful lives, and maybe kids of their own. Some of them will end up in the ditch and be forgotten, and that’s probably as it should be, too. But they all have their own lives now. And, as the parents of the songs, we wish them well — we care for them, but they’re on their own.”