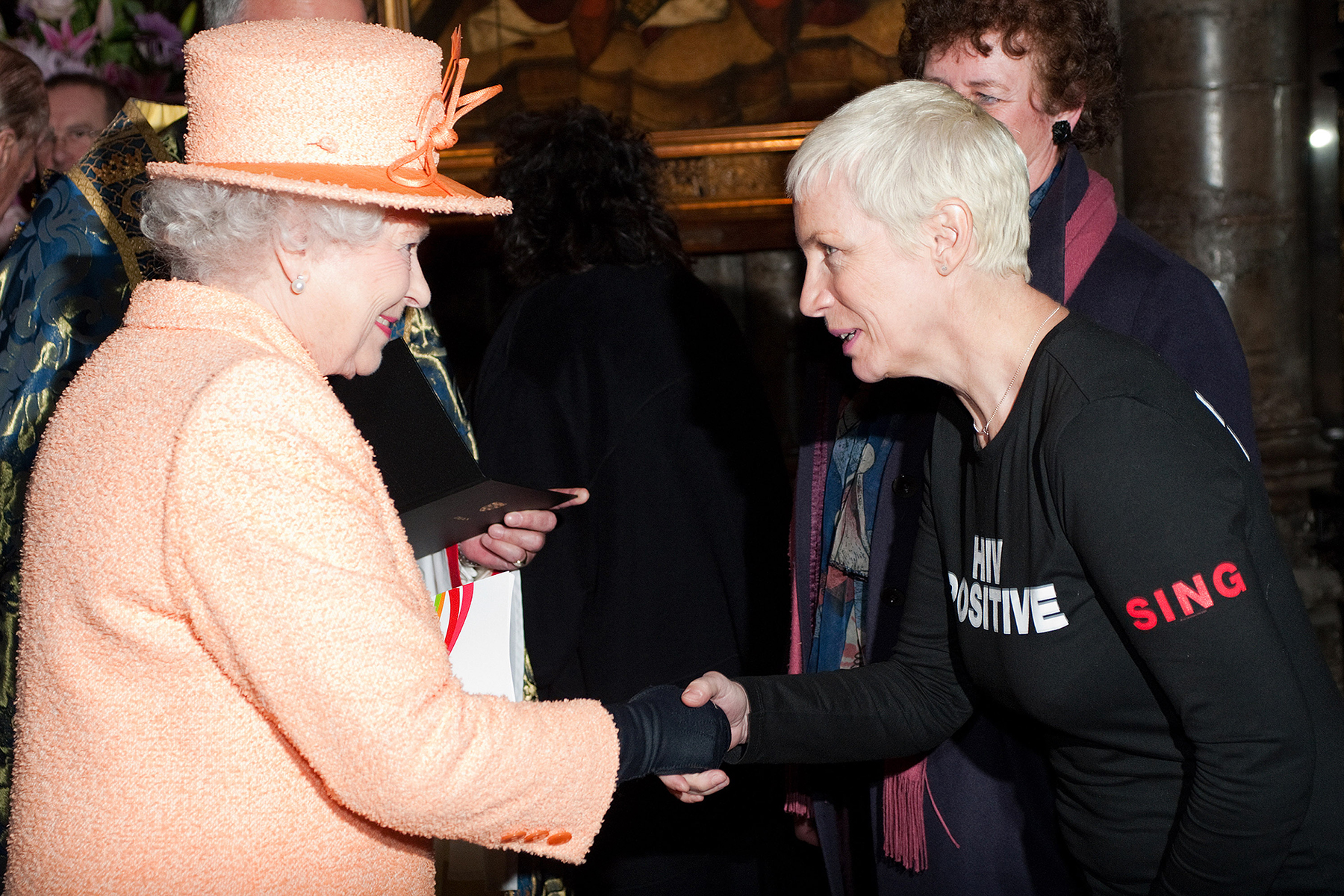 Over the decades, Buckingham Palace summoned a select group of musicians to be awarded by Queen Elizabeth II. Mick Jagger, Paul McCartney, Elton John and Bob Geldof were knighted, and Robert Plant was named Commander of the Order of the British Empire. One of the few female musicians to receive such an honor was Annie Lennox, who, in 2011, was awarded an OBE (Officer of the Order of the British Empire) for her work with the poverty-relief charitable organization Oxfam as well as AIDS charities in Africa.

It wasn’t the only time Lennox interacted with the Queen. From her Los Angeles home, she talks with Rolling Stone about her interactions with the late monarch and a recent social media post that brought up her conflicted feelings about the monarchy.

You grew up with punk and must have heard “God Save the Queen” by the Sex Pistols.
I loved it! Actually, Dave [Stewart] and I lived above Spanish Moon, a record store owned by Paul Jacobs. And one Sunday morning Paul was in a wild mood and put out two speakers and played “God Save the Queen” over and over at the loudest volume he could. He was kind of feeling rebellious. It captured how people were feeling — really rebellious: “I’m tired of the stuffy establishment, because the Queen represents the establishment.” And it was shocking. I don’t think people who didn’t experience it could have a clue as to how hardcore it was.

Did that impact your view of the monarchy?
I’ve got an interesting background. My mother’s parents both worked at Balmoral Castle back at the beginning of the 20th century. My grandfather was a gamekeeper and my grandma was a daily maid, and that’s how they met. So I have a connection to Balmoral and the whole area. So that’s the Royalist side of my family. They were working people working for the royal family. And then on the other side of my family, complete contrast. My father’s parents were extremely left wing and socialists. They were not extremely anti-monarchy, but they certainly didn’t believe in the system. They actually would probably have preferred there wouldn’t have been one. So I was brought up with the two extremes in my household.

I’m not anti-monarchy, but I have some criticism too. So you know, the fact that the royal family represents colonialism, they represent empire, and dreadful things of the slave trade era and all the conquests. It’s a very hard thing to reconcile, in this day and age, especially. Right up to today, the Queen represented the Commonwealth, and the attitudes from the Royal Family to the Commonwealth have changed over the years enormously. But there’s still a great deal to be explored in terms of the history of racism and racial abuse and exploitation. So I have mixed views. But when I talk about the Queen, I really talk about her as a woman who was in a very, very rare situation that was really not something anyone ought to feel is an easy place to be. It’s not an enviable position.

What was your first experience at Buckingham Palace?
I was there in 2002 for the Golden Jubilee. I’d never been there. But I’ve known about it all my life. So you step inside the threshold, as it were, and you’re stunned by the fact that you’re there. You go up the main staircase and into a corridor lined with priceless oil paintings on the wall, and you’re like, “Oh, my God, I can’t believe I’m here.” It’s a slightly out-of-body experience.

Then in 2010, you were at Westminster Abbey for Commonwealth Day and met the Queen while wearing a T-shirt that read “HIV Positive.”
I was invited for a reception for South Africans in the UK. I’m not South African but at that point I was campaigning very intensively on behalf of women and children who were living with HIV. And a lot of that work was centered in South Africa. At that point, I wore my T-shirt every time I ever showed up for anything, because basically, I felt I could represent the cause that I was advocating for by wearing the shirt.

That’s pretty edgy to wear that to a ceremony with the Queen.
Some people might think so. But it was something that I wore pretty much all the time. Some people thought maybe I was HIV positive, which I didn’t mind because I felt such affinity with women in particular; there are so many living with HIV, and I just felt very aligned with them.

Did the Queen comment on your shirt?
I don’t remember. We all sort of get presented and shake hands. You’re in a lineup, and she has to spend maybe 20 seconds with each person she’s presented. To be honest, I think Prince Philip commented on the shirt. I can’t recall what he said. But it was some kind of rough joke, as usual. [Laughs]

The 2011 ceremony for your OBE was more formal.
I sat among a group of about 150 people, a big crowd of people all being awarded in a room in Buckingham Palace. Everybody had to walk into the room and file in. It was very, very well organized, as you can imagine. Everybody is told what position the order is going to be. And you kind of pile up in a line behind each other, then go very formally into this beautiful, wood-paneled room with a stage and a seats for the Queen. It was a bit unreal. There are certain things you have to do. You have to go up, and you have to stand or curtsy or bow or whatever, and take a step forward, then take a step back. You’re told exactly, and I was thinking, “Oh, God, I hope I can remember what I’m supposed to do here.” It all goes by in a blink of an eye. I can’t even remember what she said. But she was very sweet and kind and looked you in the eye and you didn’t feel like you were just being kind of fobbed off until the next person was presented. She was extremely personable.

At that time, the Queen was in her mid to late 80s. I’m not particularly a monarchist, and I don’t put a lot of people on pedestals. So I didn’t look at the queen in that kind of way. But I was sitting there watching this and realizing the stamina this woman had. She stood during the whole thing, which was a couple of hours, and interacted and shook hands with every single individual presented to her. It was an astonishing feat for a woman, for a human being, to be able to stand there incredibly stoic. Everybody was getting tired and hot and fanning themselves with their programs. The queen just carried on doing what she was doing, like just a normal day at the office.

Did she know who you were?
Absolutely. I was just among the list of a lot of other people, and there’s an announcement that so and so is being awarded this and this for blah, blah, blah. Everybody knows exactly what the person being presented to the Queen has done.

Did you sense she knew your music?
I doubt the Queen ever listened much to the kind of music that I make. And I wasn’t being given the OBE for anything to do with music. But Prince Charles knows who I am. He wasn’t there, but I’ve met him a few times and did a few charitable performances for Prince Charles.

In June, you posted on Instagram about finding your OBE in a box.
That’s because I had moved from the UK to the US. A lot of my things were put in boxes, so it was in storage somewhere. I was looking through the boxes, and I found it and was like, “This is my OBE!” It was kind of touching. I think it’s in a cupboard now.

In your post, you wrote that it was a “beautiful object” and you felt honored to receive it, but also said you feel conflicted about the word “empire.”
Yes, I do, because I think I think it’s really time to change. I was uncomfortable with it. I actually I felt uncomfortable with the word empire. I think it should be changed to “excellence.” That would be a beautiful thing.

Did you feel bad posting that after hearing the Queen had died?
No, no, not at all. I think the royal family should welcome it, because they must be looking for ways to reinvent themselves. If you look back at the history of any monarchy, it’s about rule and divide. And looking at it from a modern-day perspective, it’s not great. We ought to be really reconsidering that. And I think that the monarchy is about evolving and changing, and Prince Charles is forward-looking and probably would welcome any suggestions of anything that would be helpful in that case.

One last question: When you saw the Queen, did you mention that Sex Pistols song?
It would have totally gone over her head. I know my players. I know when things are inappropriate. [Laughs].