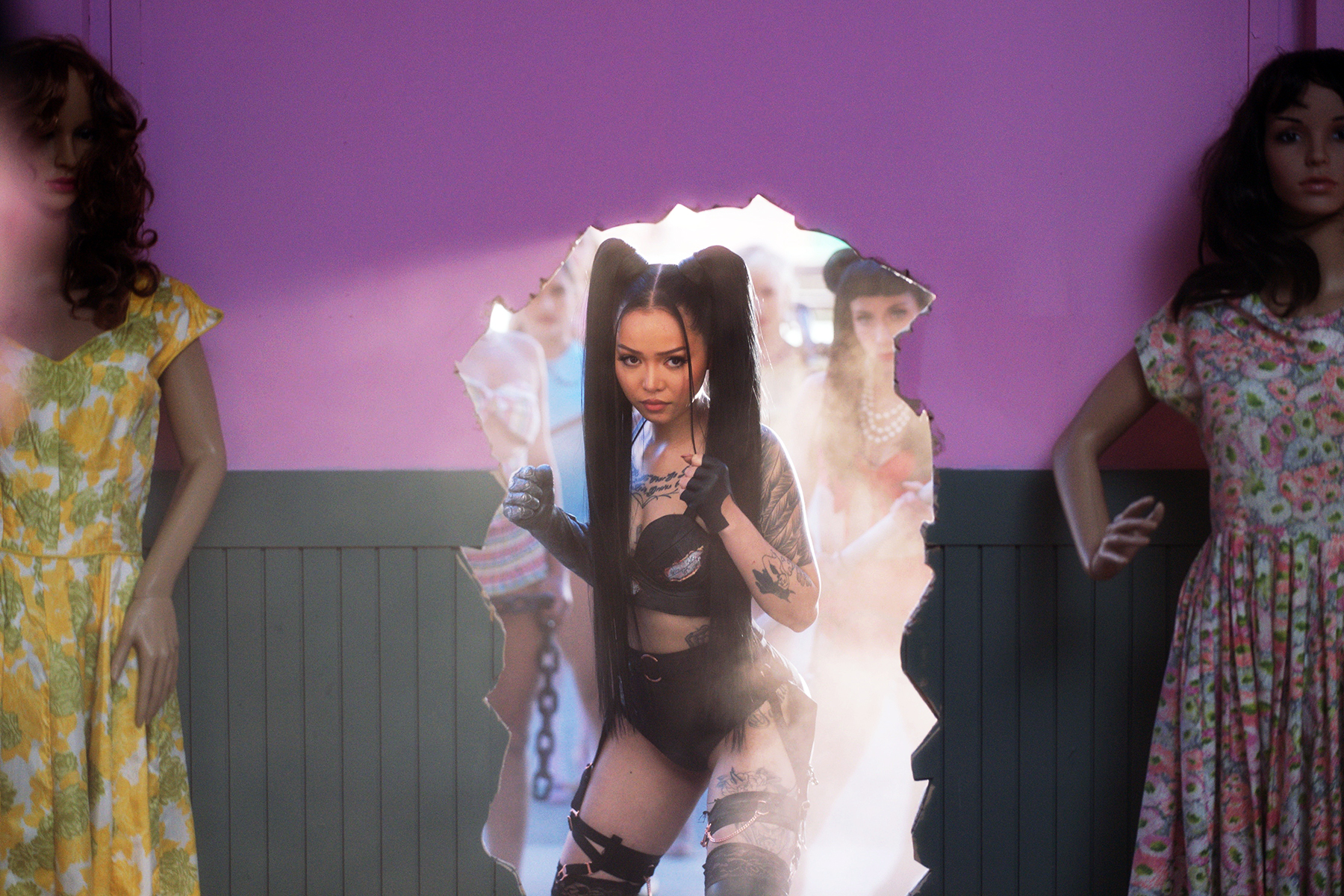 It took Bella Poarch and Grimes five days before they were ready — really, 100% ready — to slap the shit out of each other. (Well, at least on camera.)

“I was scared of getting hit in the face,” says Poarch, the social media queen and rising pop star. Then she starts cackling. “I actually did get hit in the face, but it was an accident. … Me and Grimes were really into it, and she accidentally scratched me with her claws. You remember the claws?”

With the video for last year’s “Build a Bitch,” Poarch introduced fans to a dystopian city where men could step into a retail store to create their perfect robot woman. (The place is called “Match Made.”) In the vid, Poarch’s robot self leads a rebellion, blows up one of the factories, and takes her fellow robot “Dolls” to their eternal escape. Or so we thought.

“Build a Bitch,” and its fan-favorite video, served as the first musical (and cinematic) introduction to the next chapter in Poarch’s career. It proved that the Navy-veteran-turned-TikToker — who built a devoted following thanks to her lighthearted lip-sync videos — was a force to be reckoned with. That she was fully serious about this music thing.

Now, Poarch is ready to release her debut EP, due out Aug. 12. On Friday came the first track, and the return of the Dolls. The accompanying video expands the Bella Cinematic Universe with even bigger production — and cameos from the internet’s favorite stars, including her cousin and digital superstar Bretman Rock, the YouTuber Dream, singer Madison Beer, and, oh yeah, Grimes and her claws.

“Dolls” kicks off some time after the “Build a Bitch” revolt. Poarch is ready for revenge following the death of one of her doll friends. Sporting a bionic arm, she attempts to take down the powerful force behind the corporation that’s been perpetrating a society built on the male gaze. (I guess it’s not that different from our own!)

Working again with Andrew Donoho, the director behind “Build a Bitch,” Poarch concocted a world where her character gets to feel the “satisfaction of fighting back,” as she tells Rolling Stone. “That’s what I wanted the message to be: Be a badass, be the main character, and don’t let anybody ever step on you.”

Poarch, Donoho, and the video’s villain — Grimes — broke down how they were able to “cram about a feature-film worth of content into four minutes,” as Donoho puts it, as well as all those cameos and a fight scene that nearly gave the crew a “heart attack.”

It also took more than 50 treatments before Poarch and Donoho came to an agreement that this was the world she’d create for “Dolls.” (One version followed Poarch after being disposed of in a junkyard; another began the nanosecond after “Build a Bitch” ended.)

“‘Build A Bitch’ had a lot of seeds planted,” explains Donoho. “We ended up doing almost three months of back-and-forth, where I’d write a version and was like, ‘We have to see kind of who’s the one that’s orchestrating this. There had to be some kind of ramification for these dolls escaping.’”

Using a Disney ranch backlot as their main city location — appropriate for this Marvel-esque production — and an “old bank” as the Match Made CEO’s lair, Poarch and Donoho came up with a world outside of the robot factory with a tall, pink “MM” building in the background.

“We wanted to take it a lot further than you’d kind of ever expect for just an average pop video,” says Donoho.

With way more guest stars, too.

Grimes and Poarch have grown close as she’s entered the music world over the past several years; so collaborating seemed like the next natural step. “I’m a very shy person and I struggle with social anxiety, so when I hang out with friends like her, who’s very vocal about a lot of things, it makes me want to come out of my shell too,” explains Poarch.

In the video, Grimes — who takes on the role of an evil, mind-controlled doll built specifically for the Match Made CEO’s protection — dukes it out in a Hollywood-blockbuster-style fight scene with Poarch. It’s the centerpiece of the video, but it wasn’t in the original plans for “Dolls.”

For Grimes, taking on the role and doing the stunt work herself was simply a “no-brainer.” “My fave characters in cinema are Jinx from Arcane, Pris from Blade Runner, Harley Quinn … unhinged, traumatized, antihero, alt-girls who are elite at combat,” she tells Rolling Stone. “I adore inhabiting that archetype from a performance perspective.”

In her scenes, Grimes wears a tight-fitting white bodysuit and her blond hair in braids, with her makeup taking a “cyber Viking aesthetic mixed with Blade Runner, but also a bit anime, a take on the Evangelion girls,” she explains.

Poarch and Grimes’ minute-long fight scene pauses the song and sees the two dolls going at it.

That’s when Grimes’ metallic claws come out — the ones that scratched Poarch’s face IRL. “I was like, ‘It was an honor,’” Poarch says, laughing.

Grimes has a different take on the incident. “It’s very nice for Bella to say I only scratched her, ’cause I fully clocked her in the face at full force wearing sharp metal claws,” Grimes says. “Like literally could have disfigured her or knocked her out.”

For the crew on set, seeing the accidental “scratch” (per Bella) or “clock” (per Grimes) meant a mini heart attack. After all, most movie fight scenes never involve the combatants actually hitting each other. “But when Grimes spun around, she just slashed Bella cross the face for real,” Donoho says. “It was like this moment where you could hear a pin drop on set and everyone froze. I was like, ‘Oh, my God, we’re going to have to call it a day.’

“I ran up to Bella, made sure she was OK, and then once she started laughing and smiling, it was great, but there was definitely a heart-attack moment there,” adds Donoho.

He says there’s even an outtake of Grimes where she’s running to hug Poarch and check that she’s OK. “This is proof of why most artists won’t do their stunts,” he says. “If they have fight scenes, they’ll have the most minimal version of a fight scene. We went a lot further than you’d normally go with talent like this.”

Donoho says the fight scene itself was originally cut to be six minutes, but for time constraints, and to let the song lead the narrative, it had to be reduced to the 50-something seconds it ended up being.

“The biggest challenge was, honestly, just shooting it all in one day,” Donoho says. “It’s the same as a dance or something that has to be tightly choreographed with all these little moving pieces. We might spend two hours on just the shot where Bella gets swung to the ground by her pigtails.”

The last few seconds of the video follow Grimes slamming Poarch through a wall to see a Squid Game-like control room. Grimes’ character looks up to a set of monitors and sees how the dolls introduced at the start of the video are killed and carried away before her red-lit eyes turn off and she stands side-by-side with Poarch, quitting the brawl.

“My character realizes that she’s perpetuating cycles of abuse, perhaps she herself has been abused,” explains Grimes about the ending. “Maybe similar to the Metropolis plot where the robot girl realizes she’s a superweapon, but she feels love and doesn’t want to be destructive. … I think my character is going through a reworked version of that plot that is more about sisterhood.”

Adds Poarch: “It’s her realizing that she’s one of us. She’s having a realization that ‘My gosh. Why am I beating you up? I’m like you and you’re like me, so we should be working together.’”

Like Poarch’s “Build a Bitch,” “Dolls” is filled with cameos from some of her closest friends, and real-life dolls like Chloe Cherry (“I met her and I was like, ‘She’s cool. We should do something,’ ” says Poarch) and Madison Beer (“She’s super gorgeous”).

At the beginning of the visual, Beer is seen getting dolled up, ready to be shipped off to be with the man who build her. “She’s compliant with what’s going on and she’s accepted she’s a doll,” explains Donoho. “Then she sees Bella and has this joyous reaction as she’s going out and escaping.”

Then, Beer — alongside Cherry and other characters from “Build a Bitch” — fights off some guards and helps Poarch find her way into Match Made’s HQ. “I love creating the visuals when it comes to my own music, so it was really cool to help Bella bring her own vision to life for the ‘Dolls’ video,” Beer tells Rolling Stone. “I love what this video represents and the hard work that went into making it.”

“Dolls” also sees some digital creators featured in “Build a Bitch” reprise their roles. Bretman Rock — who plays a shocked witness to Poarch’s destruction — tells Rolling Stone that working with Poarch “never feels like work.” “I just showed up and we just played around the whole time, so it was fun,” says Rock. “I really appreciate that her music videos aren’t just for the music, it is also for the story…Bella is just truly not afraid to go there.”

The ending scene of Grimes and Poarch side-by-side leaves the door open for a yet-another sequel that neither Donoho nor Poarch want to confirm is coming. “Honestly, I already wrote the third part. If it does happen, then it’ll happen,” says Poarch. “If it doesn’t, the story is [already] so amazing.”

For now, Bella is hitting pause on the Dolls storyline as she releases her EP. The six-track project includes a song “featuring one of my close friends,” says Poarch without revealing who. And the video for the next single, she says, is going to be “very different.”

“I love to be the superhero,” says Poarch. “[But] I also want to show off the artistic side of me. So, the third video will be very, very artistic.”

“There’s one song on there that my fans will love because I show off more of my vocals,” she adds, referring to a track called “Living Hell.” “I’m sure it’s going to be a karaoke song for my Filipino fans.” Bretman Rock may or may not be able to attest to that. “I feel like she will kill me if I say I’ve heard her new music, so no, legally I have never heard any song that she’s going to be coming out with,” says Rock. “But if I have heard it, it’s probably going to be the best song in the world.”

When asked to tease her project as a whole, Poarch smiles: “If you want to feel like a bad bitch, listen to my EP,” she says.