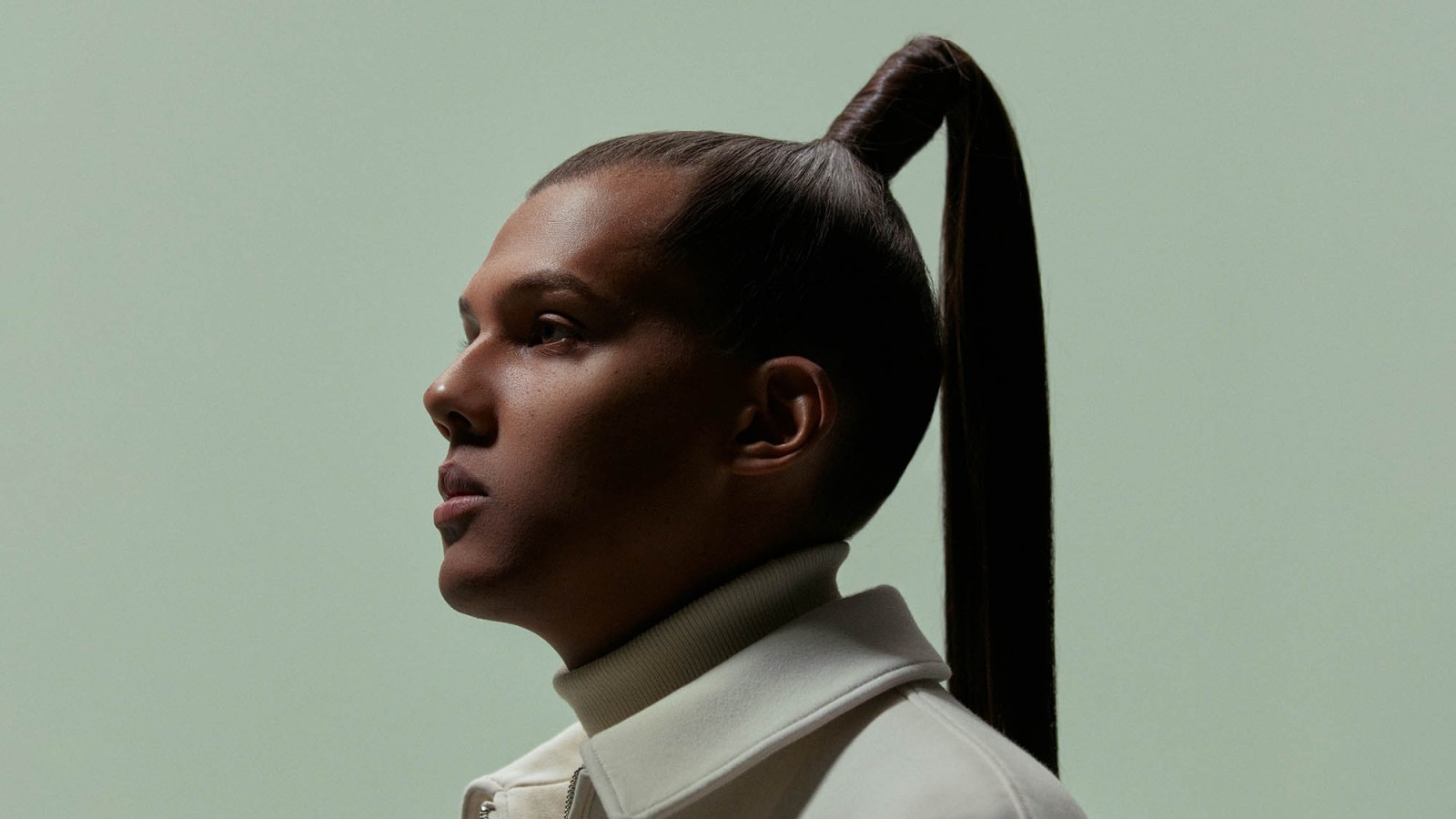 It took Stromae nine years to return to music. The reason, he says, was simple: “I needed to get inspired by normal stuff.” After seeing international success with his 2010 club-pop single “Alors on Danse” and making history as the first French-singing performer to sell out Madison Square Garden, in 2015, the Belgian artist felt that he needed to “live a normal life.” So he took a hiatus.

Away from the spotlight, Stromae had a baby, married his longtime costume designer, Coralie Barbier, with whom he created and grew a fashion label called Mosaert, and occasionally dabbled in music behind the scenes, directing videos for Dua Lipa and Billie Eilish. The hiatus was his way of experiencing la vie quotidienne, in order to, as he puts it, “tell new stories that could touch listeners.” It wasn’t until 2018 that he wrote a song called “L’enfer,” about his previous struggles with suicidal ideation, that the artist — born Paul Van Haver — began to concoct the global layers of lyrical vignettes on his third LP, Multitude, released this past spring.

You have a special way of experimenting with sounds from all over the globe. Where does that come from?
It comes from my mother, who’s a world traveler. And my big brother [and creative director, Luc Van Haver], who introduced me to [Japanese cyberpunk film] Ghost in the Shell. The film’s introduction is sung by a Bulgarian choir using the same vocal technique used by Japanese singers. I wanted to have [Andean string instrument] charango on a track, so we contacted a player from Bolivia. I was inspired by Latin music, music from the islands, and African music, which are all actually in my blood because I grew up listening to them. It’s something I love to do: connect countries that we’re not used to seeing connected.

What do you think has made your music resonate around the world, despite it all being in French?
It’s difficult to have an explanation for this. I’m just doing what I think is sincere. Even if they don’t understand the language, they understand the sincerity. I’m sure of that. I have the same feeling when I listen to English and Spanish music. When it touches you, even if you don’t understand the language, you can feel the emotions. I could try to sing in English, but I’m sure I would not sound natural, and people would feel that.

As an international artist, what would it mean to you to be recognized at the Grammys for Multitude?
It’s a dream for me, so I would be super honored and happy. The Grammys is one of the most prestigious ceremonies in the world, so of course, as an artist, you dream of it. It’s even more special as a French-speaking singer. It would be a real recognition of my work outside of Europe.

Only two Belgian artists have won Grammys in the past: Gotye, who took home Record of the Year in 2013, for “Somebody That I Used to Know,” and the Singing Nun, for “Dominique,” way back in 1964. What does it feel like to represent your country to the audience that votes on an award like this? And what would it mean to you to join that select group of nominated artists from Belgium?
For me, all languages are beautiful to sing, so I would be delighted to join my two compatriots in this very closed club of Belgian Grammy winners. I like their songs, by the way! But it’s also a way of showing that just because you come from a tiny country like Belgium doesn’t mean you can’t achieve great things.

Much of your music is laced with deeper messages. What inspired some of the songs on this album?
For “Santé,” actually, I was inspired by the woman who cleans my house. Her name is Rosa. That’s why I named her at the beginning of the song. I wanted to celebrate the ones who can’t celebrate. For “Fils de Joie,” I had watched a TV show about the children of sex workers. Everybody has an opinion about sex workers, that’s a part of humanity that we want to hide all the time. I was touched by their stories, so I just decided to tell a story. I take the point of view of the client, the son, the police officer. I just want to put a spotlight on stuff that we’re not used to talking about.

Your music has received recognition from will.i.am, Lorde, Madonna, and Kanye West, who remixed “Alors on Danse” in 2010. What’s it like to be recognized by that level of artist?
Kanye was a big surprise for me. “Alors on Danse” had big success in Europe, and we were wondering “Who could go on the track to go and try to conquer the U.S. market?” They asked me to make a list. I put Kanye West at the top, and the label convinced him. I was really looking up to artists like Kanye West and Timbaland. And — who’s the husband of Alicia Keys?

Swizz Beatz.
Swizz Beatz. These kinds of producers in hip-hop. Actually, Timbaland listened to my album recently. He makes these videos filming himself discovering new albums, and he was listening to “Fils de Joie.” I was so surprised. To see these legends listening to your music, enjoying it, it’s a beautiful compliment. Those are the surprises of life.

You recently released a bilingual remix of your song “Mon Amour” with Cuban Mexican singer Camila Cabello. How did that collaboration happen?
That’s a funny story. We were in line waiting for the red carpet [at the Met Gala]. I was behind Camila, and she recognized me. I was so surprised that she knew about me. I wasn’t sure it was her, so I said, “Are you Camila Cabello?” She said, “Yeah. I’m a big fan.” We stayed in touch, and she said “Mon Amour” was her favorite track on the album. I said, “That’s the next single. Do you want to jump on it?” She said, “YES! YES! YES!” I remember three yeses, in capital letters. There is a big rumba influence on it, with this baile funk rhythm. I love how she sang on the track. I have listened to Latin music since I was young, so maybe that’s the reason why we connected so easily.