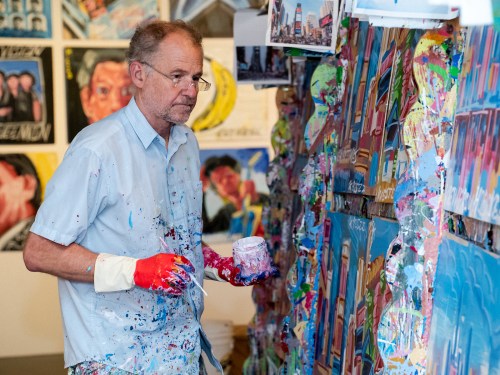 The afternoon sun streams through the windows of the Brooklyn art space ChaSaMa. Steve Keene, possibly the world’s most prolific painter, is hard at work, even though the gallery’s hosting a retrospective of his work. Right now, he’s adding a few blond streaks to Iggy Pop’s hair on the cover of the first Stooges album. Keene’s most famous for painting album covers on plywood panels, dozens per week, then selling them absurdly cheap. “It’s handmade,” he says with his easy grin. “That means somebody really cared about this shit for however long they spent making it.”

He’s been doing it this way for over 30 years, becoming the ultimate indie rock painter. “I mass produce my work,” Keene says. “I do about 10,000 a year. So I’ve done about about 300,000. Even if half of my pictures get thrown in the garbage over the years, there’s still 150,000 of them out there, hanging in people’s kitchens or bathrooms.”

Or dive bars. Or hip coffee shops or indie bookstores. A David Chang restaurant. The Zoe Kravitz reboot of High Fidelity used Steve Keene artwork to set the scene. (It would’ve looked odd if it didn’t.) He’s painted album covers for his old friends in Pavement (their 1995 classic Wowee Zowee), the Silver Jews, and the Apples in Stereo. He cranks out his high-speed iconic artwork from his Brooklyn home studio. But wherever you see a Steve Keene painting, you know you’re invited into a room worth visiting. By now, he’s the El Greco of vinyl fanatics.

Now, he’s finally got his art collected in book form, with a lavish new anthology. The Steve Keene Art Book comes from Hat and Beard Press and Tractor Beam, produced by the Apples in Stereo manager Dan Efram. The ChaSaMa retrospective runs through Oct. 14. The book is a massively dazzling celebration of fandom as an art form — playful, affectionate, slightly unhinged. As Superchunk’s Jon Wurster says in it, “One of the greatest moments in any musician’s career is seeing a Steve Keene rendition of your album cover. Who am I kidding, it’s the greatest moment.”

Right now, Keene touches up his Stooges painting, surrounded by LP covers from Patti Smith, A Tribe Called Quest, Herbie Hancock, Mission of Burma, and Bikini Kill. There’s a whole wall dedicated to the Pavement discography. He’s also painted the new Yeah Yeah Yeahs album, which just dropped a few days ago. The Stones’ Aftermath plays while he works, with jars of paint across the gallery floor. “Most of the time I’m working when I do a show,” he says. “So people can see the filth of the creative process. But hopefully that’s the dirt that the flowers grow out of.”

Keene and his wife, Star, came out of the music scene in Charlottesville, Virginia, in the late Eighties and Nineties, with friends like the Silver Jews’ David Berman and Pavement’s Bob Nastanovich and Stephen Malkmus. They met as DJs at the radio station WTJU, where indie rock mixed with jazz, folk, classical, bluegrass, rap, and R&B; it still has the same wildly eclectic spirit. His painting was inspired by watching his friends’ bands. “It was that idea of punk rock and WTJU and do-it-yourself culture,” he says. “The idea that your band would get six people in a van, drive six hours, and hope that 12 people show up so you can sell 10 cassettes. I loved that Don Quixote spirit, the bravery of it, just trusting in your spontaneity.”

Keene went to art school at Yale, but left unsure if he still wanted to paint. Keene says, “When I got to Charlottesville, I was a little lost,” he recalls. “Most people go to art school and just drift away into ‘Why did I do that?’ I had to figure out a reason for me to do it.” He found his reason—of all places—doing the dishes. “My favorite job ever,” he says. “Washing dishes at [local bar] Eastern Standard. David Berman and Bob Nastanovich did that, too—we always shared shifts. To get the job done, you had to create systems to make it easier for yourself and have fun.” That’s his approach to painting. “I create a system, the art is the end result, then people can decide what they want to do with it.”

Charlottesville in the early 1990s was a cheap, freewheeling town to be young, broke, and arty, so WTJU was a hotbed of music geeks. Steve was an excellent DJ—a born crate digger, in a radio station overflowing with stacks of vinyl. He and I DJed together on WTJU—every year, for the marathon fund-raiser, we hosted the Slumber Party Massacre, spinning forgotten pop-trash hits of the Seventies. (Berman would call in to request country songs.) This guy had a knack for playing unironic, 100 per cent sincere air-guitar to Toto and Loverboy jams.

“That was one of the most moving things in my whole life, just being in WTJU and looking at all these albums,” he says. “We did radio shows solely on how we liked the covers—Black Oak Arkansas, stuff like that. Visually, that’s what I think about when I’m lost. I just think, it’s just like being at the radio station, where you’re surrounded by all these individual tiny little dreams. Piles of dreams. That’s what my paintings are.”

He started out selling his art in “vending machines”—he put a box of paintings at the record store. It was an honor system: you threw in two bucks for a small painting, five bucks for a big one. Before long, it seemed you couldn’t go more than a few yards without seeing them. As Keene says, “When I started out doing this in Charlottesville, it was like bands having their CDs or cassettes in shoeboxes, or putting a pile of fanzines in front of the record store or book shop. If you wanted people to know about your band, you had to actually tell them, or give them something. You didn’t just Google it—it had to be a physical interaction.” His work aims for that sense of contact. “This art is my fanzine, essentially—the latest edition of my one-page zine.”

On his website, you can order a random selection of six paintings for $70. “It’s not a Warhol thing to me,” Keene says. “It’s a minimalist 1970s process-artist thing.” But he thinks there might be a reason people crave handmade tactile art these days. “People were weirded out that everything was Zoom. I see my pictures online and everything’s flat and everything’s a picture. A painting, it’s bumpy—you can touch it. It’s in real space. And nobody was in real space for two years.” This summer, Star and Steve went to Spain for their daughter’s graduation, and caught their old pals Pavement at the Primavera Festival.” “Our last festival,” Star announces cheerily.

While we’re talking, Pavement’s Bob Nastanovich and Steve West walk in, to check out the exhibition. Keene is reeling from their show last night, especially his fave rave, “Pueblo.” Bob is willing to admit it was a good night. “Adrenaline is a weird hormone,” he says. For the band’s NYC stand, there’s a pop-up Pavement Museum across town in Tribeca, curated by director Alex Ross Perry, en route to London and Tokyo before reaching its permanent home in Stockton, California. Keene created many of the museum’s artifacts, including a phony “Absolut Pavement” vodka ad. “I cranked out that stuff brand new for them,” Keene says. “They couldn’t find the Wowee Zowee cover—they lost the real painting. They asked me to make up a new one, but I said, I can’t just do one, so I made a million of them, and they used them all. I love to be useful.”

He’s seen his art in strange places along the way. “Royal Trux used some of my pictures to put their sound equipment on, when they played second stage at Lollapalooza. Just to hold their mixer. See? That’s multi-purpose art.” But for now, he just keeps the paint flowing. “I try not to think about it,” he says. “I always have big ideas, then I get in trouble. If I just don’t have any ideas, everything works well.”