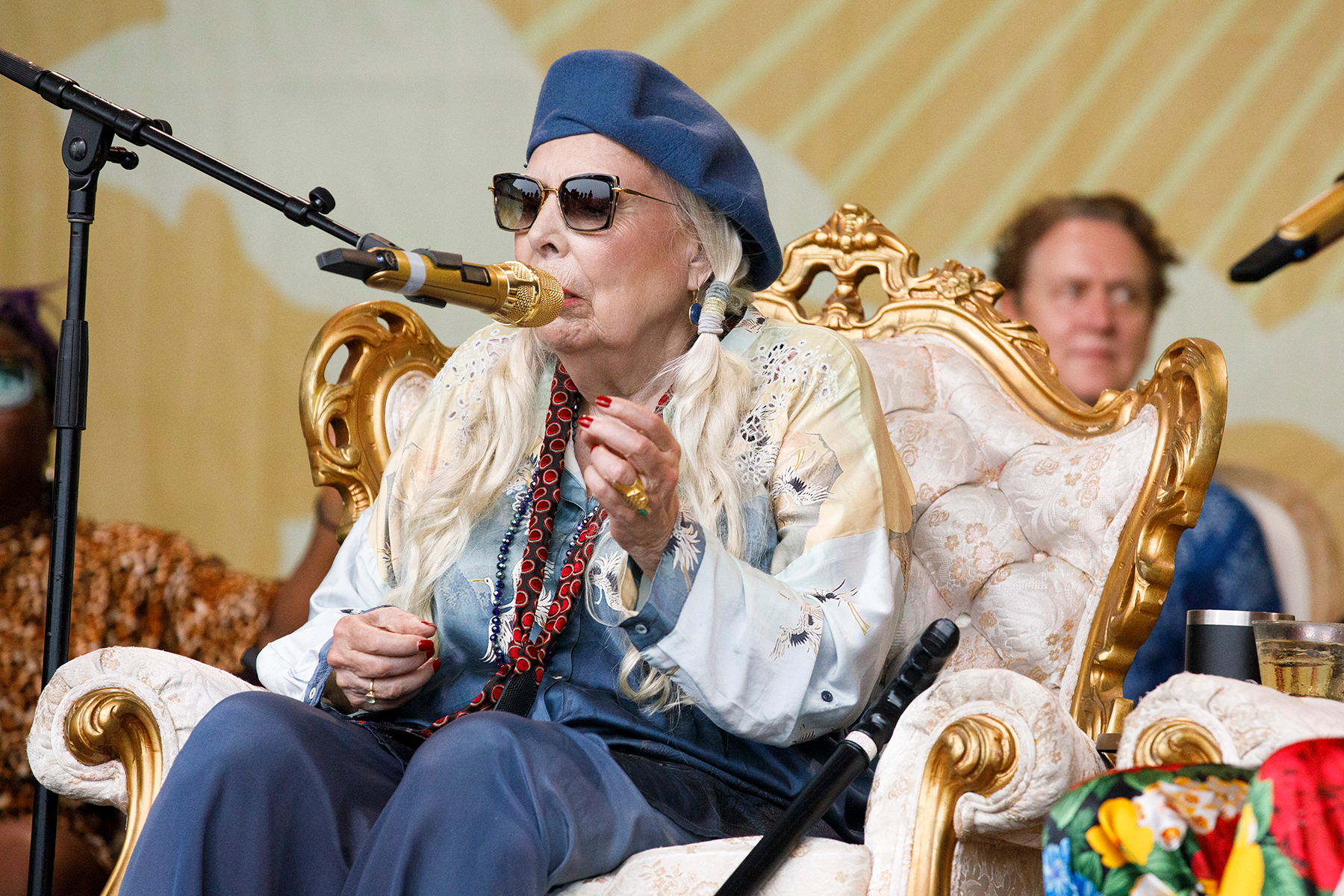 Last July, Brandi Carlile had a provocation for her friend Jay Sweet, the head of Newport Folk Festival. “One year from now,” Sweet remembers her telling him. “I bet you we can get Joni Mitchell to this stage.”

The festival head was skeptical. A few years back, he had witnessed a magical moment at a show in Los Angeles when Mitchell was reunited with her old friend Mavis Staples, whom she hadn’t seen in many years. When the two singers met, they butterfly-kissed, nose to nose, for a full 30 seconds without speaking. It was an unforgettable moment, but that evening had also left Sweet with the impression that Mitchell was not in any physical condition to perform for a live festival audience. “I gotta be honest with you,” Sweet remembers telling Carlile when she proposed her idea. “You are the manifester of miracles, but you may have overshot on this one.”

One year later to the day, Joni Mitchell made a triumphant, emotional return to the stage at the Newport Folk Festival, where she had performed multiple times in the Sixties, and where she now gave her first full set in over 20 years. Mitchell’s performance was the culmination of the singer’s strength, determination, and resilience after spending years teaching herself how to walk, sing, and play guitar again in the years following her 2015 aneurysm. “I’m learning,” the 78-year-old songwriter told CBS before her Sunday evening performance. “It’s amazing what an aneurysm knocks out — how to get out of a chair….You have to relearn everything.”

By the time she left the stage on Sunday, Mitchell had relearned all of those things and more. She thrilled and devastated the crowd with a 13-song set in which she reinterpreted her older material, told stories, sang cover songs from her childhood, and even stood up for a thrilling electric guitar solo on “Just Like This Train.”

“She schooled us all in real time,” says Celisse, the singer-guitarist who performed a reimagined “Help Me” as part of the all-star cast of musicians (also including Blake Mills, Lucius, Taylor Goldsmith, Marcus Mumford, Allison Russell, and more) accompanying Mitchell on stage. “Joni did this brilliant thing where would be singing these lyrics you’ve heard a million times, but all of a sudden, she would beat you to the punch and phrase the line in a new, even more musical way. And you’d think, ‘Fuck, what a new, interesting way to think about it.’”

Celisse continues: “She’s not the soprano she used to be, but my god, her alto is so rich and deep and wise, and her sense of how to interpret her music today, in her seventies, is even more profound than it was when she wrote the music.”

She singles out Mitchell’s performance of songs like “Come In From the Cold” and “Both Sides Now” as radically vital present-day artistic regimaginations. “The way she was using rhythm as a storytelling device was really profound,” Celisse says. (In the former song, Mitchell sang the song’s chorus early, ahead of the beat, as if to exaggerate the respite and longing expressed in the song’s refrain.) Over the years, Celisse has taken part in many tribute concerts to aging legends before, but if one thing was clear to her, it’s that Mitchell’s performance was no ordinary case of honoring someone who’s past their artistic prime. “This was not a situation in which we were pulling her along,” she says. “She was pulling us along. We were the dead weights, quite frankly.”

Mitchell put it more simply just days before she took the stage: “I’ve never been nervous about being in front of an audience,” she told CBS. “But I wanted it to be good.”

And although she’s received a lot of attention and credit for helping coordinate this historic performance, in the days after the performance, Carlile has made it clear that this moment is ultimately about only one person. “Watching [Joni] get herself to this point has changed my whole outlook on life,” Carlile tweeted. “What she’s accomplished with her body belongs to Joni Mitchell and Joni alone.”

The first time Celisse played her version of “Help Me” for her hero, it was at one of Mitchell’s now-legendary “Joni Jams” at her Los Angeles home this past October. Mitchell loved her interpretation, so much so that, as Celisse remembers, she asked Celisse to promise she’d return for another jam. When Celisse joked to Mitchell that she’d be happy to move in and start sleeping under the pool table, Mitchell replied, “Sarah Vaughan slept right under that pool table many times.”

Several months after that unforgettable October evening, Celisse says she received a request to play at Newport as part of a set billed as “Brandi Carlile and Friends.” She was aware of the rumblings about what such a set could end up becoming, but says she didn’t know of any definite plans for Mitchell to return to the folk festival of her youth until a few months ago.

A few weeks before the show, a potential set list circulated, and Celisse learned that she would be playing “Help Me.” The musicians involved all hopped on a Zoom call to discuss keys and musical specifics a week before Mitchell took the stage; two days before the performance, Mitchell rehearsed with the band in Rhode Island. But according to Sweet, no one was absolutely certain Mitchell would take the stage on Sunday night until the moment the show began. There were times, the festival organizer says, where it seemed like she might not perform. Then, four hours or so before the set on Sunday, Carlile called Sweet: “I think it’s gonna happen,” he remembers Carlile telling him.

Mitchell has a strong personal connection to the folk festival. She met Leonard Cohen and James Taylor on its grounds (“Good friends for my life,” she told CBS). Singers of Mitchell’s generation still hold a special reverence for Newport, so much so that when Paul Simon surprised the festival by making his debut there the day before Mitchell’s set, Sweet recalls him being amazed by photos in his dressing room of artists like Big Mama Thornton and Sister Rosetta Tharpe at the festival. “He was bragging, like, ‘I’m playing Newport,’” says Sweet.

Pulling off the logistics of Mitchell’s return to the stage wasn’t easy. The festival operates on a small non-profit budget, and none of the artists who appeared onstage with Mitchell received any fee for their performance. The entire performance would not have been able to happen had George Wein, the festival’s late founder, not left money when he died last year specifically to help Sweet book his most sought-after artists.

In the days since her performance with Mitchell, Celisse has hardly been able to contain her own joy and amazement. “I’m calling you from the clouds,” she says when she speaks with Rolling Stone two days after the show. But more than anything, she’s astounded by what she witnessed on Sunday evening: the artistic, physical, and musical triumph of a legend who’s overcome as much as Mitchell has.

“All of us have been witness to this progression, but I don’t think anybody, quite honestly, other than Joni, understood what she was capable of,” she says. “Watching her on stage, it was like, ‘Oh my god, there’s even more in there than any of us even expected. There’s more.”