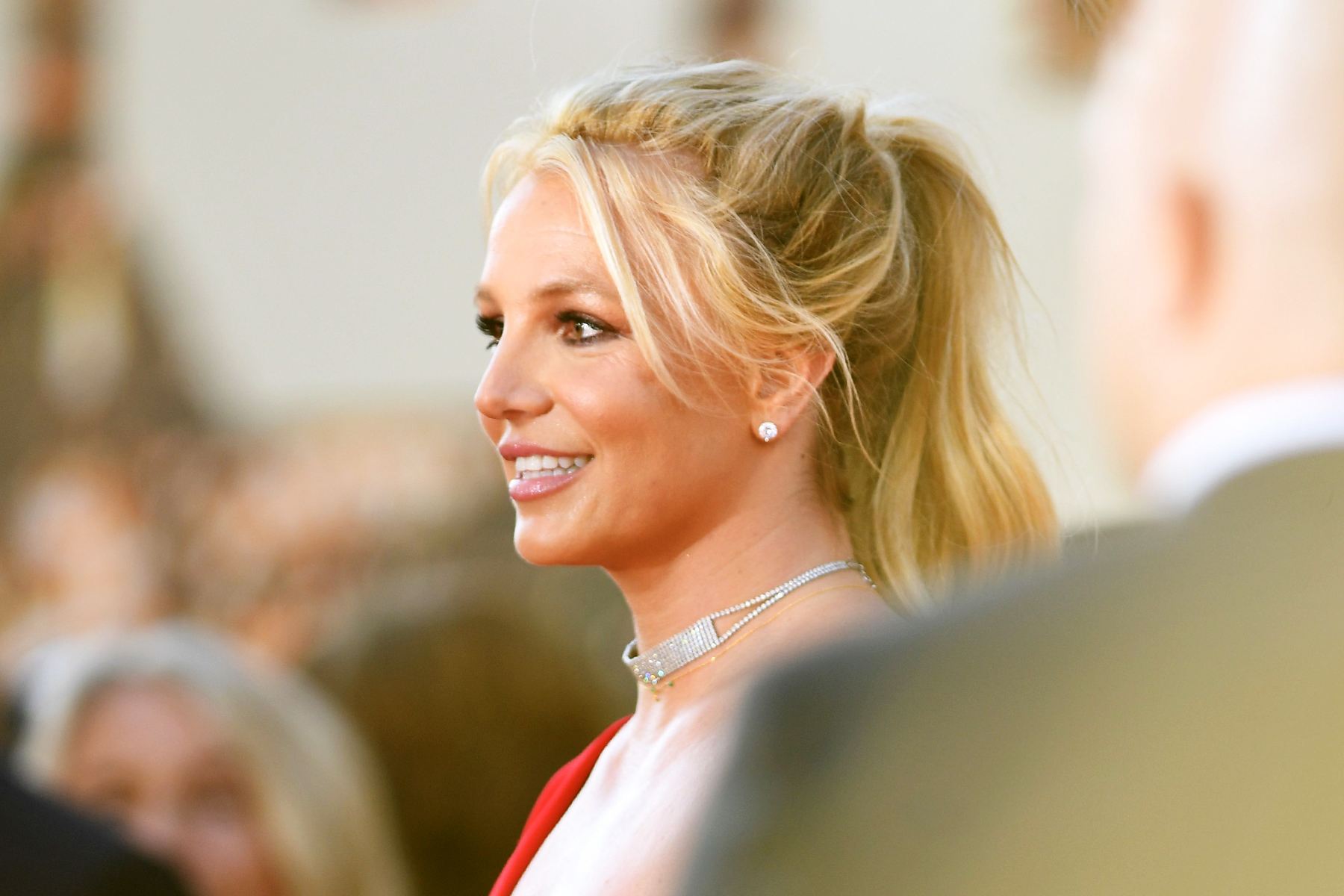 Britney Spears has just released her first new music in six years. Now that’s an occasion to celebrate. A moment that pop fans have spent years waiting for. “Hold Me Closer” is her collaboration with Elton John, tripping through a few of his classic hits with a disco throb. If you’re a longtime Britney fan, it’s a massive emotional experience to hear her sing again. To hear her step into a studio and unleash her growl. To hear her dust off that “baby.” A joyful day for all of us who must confess we still believe. (Still believe.) It’s the sound of a pop queen who’s kicking off a new era, coming back stronger than yesterday.

Britney’s waited a long time for this day. And so have we. Her loneliness ain’t killing her no more.

“Hold Me Closer” is her first tune since she got free of her nightmarish conversatorship, nearly 14 years of captivity. Nobody on earth would blame her if she refused to go back to pop music. “After what I’ve been through, I’m scared of people and the business!” she wrote in a social-media post last December. “They really hurt me! Not doing my music anymore is my way of saying ‘Fuck You.’”

But for Britney, singing is her way of moving on into the future. As she wrote this week, “I want to be fearless like when I was younger and not be so scared and fearful.” You can hear that in “Hold Me Closer.” For a woman who’s got every reason and then some to feel bitter, it’s poignant to hear her reclaim her voice, singing the word “closer” three times in a row, hitting each one harder. As she posted, what this song means to her is simple: “I choose happiness and joy today.”

It helps that she’s got another legend in her corner, cheering her on: Elton John, who she calls “one of the classic men of our time.” Elton is a million different things, but chief among them is that he’s the most devout of pop fans. Alone among stars of his generation, he’s the one who never stops devouring new music and fanboying over new artists. He loves to floss with young divas like Dua Lipa, Miley Cyrus, or Rina Sawayama, the same way he always loved shining a light on Kiki Dee or Billie Jean King. And he’s done the same for Britney in “Hold Me Closer.” She’s still standing, yeah, yeah, yeah.

“Hold Me Closer” is a Britney comeback—but then, most of her hits are. For her, it’s the non-comeback hits that are rarities. Ever since she blew up with her 1998 debut single “Baby One More Time,” she’s been counted out, written off as a joke, dismissed as a puppet. Nobody has ever seen her career prounounced dead more times than Ms. Bad Media Karma Another Day Another Drama. She’s witnessed more of her own funerals than Rasputin. But as she warned a decade ago in “How I Roll,” she’s got nine lives like a kitty cat.

So it’s an excellent time to celebrate the REAL Britney: one of the greatest pop artists to ever walk the earth. While everyone was fixating on her image, her fashion, her personality, everything except her music, this woman has actually built one of the most amazing catalogs in the history of pop music. A hugely influential visionary who permanently changed the way our lives sound. An innovator. An originator. “Hold Me Closer” is a reminder that she’s a singer first and foremost. Brit’s been in the game for nearly nine thousand yesterdays, and she’s stronger than all of them combined.

The last time she released new music, her excellent 2016 album Glory, the world totally slept on it. Face it, world—this was not your proudest moment. If you really want to appreciate “Hold Me Closer,” go back to Glory and open your ears to what she’s doing in “Clumsy” and “Man in the Moon.” And savor the bonus track “Swimming in the Stars”—Knee Knee was on a real streak with Bowie-style astro-love ballads.

For some bizarre reason, nobody was listening. Brit got taken for granted, as usual, and Glory sank without a trace. Only Rolling Stone gave this album a serious appreciation, a tradition that goes back to 1998, when RS was the only place where writers were paying attention to “Baby One More Time” as a radically innovative piece of music. As Rolling Stone said of Glory, “Even when she transforms herself into a human mirror ball, glitzed out and blitzed out, her supposedly anonymous voice is a sonic signature any pop fan can recognize in seconds. There’s no other sound quite like that droid-soul glitch-twang in Britney’s voice – think “Toxic,” “Lucky,” “Piece of Me” – speaking to the bored, frustrated, ready-to-explode disaster queen in all of us.”

As for the much-despised single “Private Show,” it might seem like a dumb banger about a strip club, but it’s a revealing Black Mirror-like statement about what Britney was going through. She thinks she’s having an intimate moment with a lover, only to realize there’s an audience watching. So she just shrugs, “Guess that’s the end. Can we go again—do it all again? Nah, I’ll take a bow.” WAY too real.

Her previous album before Glory, 2013’s Britney Jean, is worth revisiting, too. Britney Jean is remembered as a wash-out, because of a glut of miserable ballad goop. But it has amazing peaks. “Alien” is the mother of all Britney-as-Bowie ballads, where she drifts sadly through the cosmos to William Orbit space bleeps. And “Passenger” is her version of Beyonce’s “Halo,” a power ballad about finally finding a companion she trusts enough to take the wheel. The moment where she sighs, “This is living!”—well, that’s a lot like how “Hold Me Closer” feels.

But even after 24 years of Britney discourse, the ultimate taboo is still taking her actual music seriously. She deserves to be respected as one of our boldest pop brains, not just a case study in celebrity. It’s conventional to trivialize her as a casualty, a wages-of-fame cautionary tale, a passive vehicle for sob-story fantasies, like she’s some kind of artifact in a museum. But she is, in fact, an artist. Always has been. She’s not your perfect little American metaphor—she’s a fighter who’s steadily built one of the most amazing songbooks in the annals of pop noise.

She’s been cranking out classics ever since her 1999 debut, all the way to her genius It’s Britney Bitch trilogy of Blackout, Circus, and Femme Fatale. People will acknowledge her as a star, or as an “icon” (which is what they call you when they’re not willing to admit you’re an actual artist), but not as a musical mind, like it’s some kind of coincidence that Britney just happened to be there for the creation of several dozen of the century’s finest songs. How many times does she have to Do It Again before she gets credit for the fact that she knows what the fuck she’s doing?

As I wrote in Rolling Stone over a decade ago, on her 30th birthday, “People keep waiting for Britney to be over. They can keep waiting. When people stop claiming Britney’s over, I guess that’ll mean she’s finally over.” But now she’s back in the game, and Elton’s on her side. As Brit wrote in a post, “I’m kinda overwhelmed… it’s a big deal to me!!! I’m meditating more and learning my space is valuable and precious!!!”

Elton came up with the idea for “Hold Me Closer,” spiking “Tiny Dancer” with “The One” and “Don’t Go Breaking My Heart.” He invited Britney to take part. “She sang fantastically,” he told The Guardian’s Laura Snapes. “Everyone was saying they don’t think she can sing any more. But I said, she was brilliant when she started so I think she can.” Like the rest of us, Elton hopes this leads to more. “I’m just crossing my fingers that this will restore her confidence in herself to get back into the studio, make more records, and realise that she is bloody good.”

Britney has given so much to music, while so much got stolen from her, irreversibly. It’d be understandable if she wanted to close the curtains on that part of her life forever. So there’s something joyful about the fact that she said yes when Elton made the call. And something perfect about the fact that Elton passed her the mic. Today, she settles all family business. Now more than ever, it’s Britney, bitch.