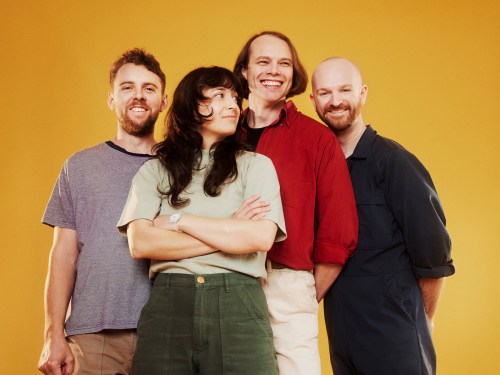 “WE STARTED JAMMING in 2014,” Elizabeth Stokes says on a Zoom one afternoon in August, trying to trace the formation of her band. “Jamming,” she repeats, chuckling as she puts up air-quotes. “I don’t feel cool enough to use that word.”

This is the kind of self-deprecation Stokes is notorious for — a defining feature, as much or more so than her slick, straight-across bangs that evoke Reality Bites-era Janeane Garofalo. When the 31-year-old combines that sense of humor with instant-singalong power-pop hooks and glowing verse melodies, you get the Beths, the New Zealand band she’s fronted for the last 8 years.

Stokes and guitarist Jonathan Pearce — her longtime partner and bandmate — are sitting in a San Diego hotel room, preparing for the release of their new album, Expert in a Dying Field. For them, that magical concoction is still being perfected. “The formula is being maintained,” Pearce says. “But with this record, we’ve just completely leaned into what we think the Beths is.”

What he means is that Expert in a Dying Field, the band’s third record, is the band at their most comfortable and confident (the title alone should give you an idea). Even the highlight “Knees Deep,” nearly four minutes of spectacular, anxious energy with a chorus that proclaims “The shame!,” has a modest backstory: Stokes wrote it at the last minute when she knew they needed something upbeat. “I was rejigging a shittier song I had written in 2018,” she says. “I just got lucky.”

That need for something upbeat is something the Beths are extremely conscious of, especially after their last album, 2020’s Jump Rope Gazers, left some fans unsatisfied by having significantly slower songs than its acclaimed predecessor, Future Me Hates Me.

“It was surprising to hear people felt disappointed,” Pearce says. “We definitely wanted to do some more mid-tempo songs, because we felt like those are the classics — the ones that survive and get sung by three or four generations of fans at rock concerts. You don’t prepare yourself for negative criticism in the way that you probably should.” He pauses briefly before quipping: “Or I don’t, anyway, because I’m an entitled white man.”

THE BETHS WERE on a high in 2019, incessantly touring in support of their debut — including several showcases at SXSW that year — and gaining a reputation as a stellar live band. “The momentum kept going,” Stokes says of that fruitful period. “It felt tied to the amount of touring that we were doing, but it was also just people sharing the album with each other. It was incredibly fortuitous timing.”

And then Covid-19 happened. The band refused to postpone Jump Rope Gazers and released it in July 2020, a pandemic album that their fans still profusely thank them for. But making a new record after that was difficult. “It was quite an uncreative year,” Stokes admits. “I got to the end of 2020 and was like, ‘OK, I’m going to write 20 songs [by] this summer.’”

They started recording Expert at Pearce’s studio on Karangahape Road in Auckland at the end of 2021, until they were interrupted by a four-month lockdown. Drummer Tristan Deck and bassist Benjamin Sinclair worked remotely, while Stokes and Pearce hunkered down at home. For the couple of seven years, working and living together in quarantine wasn’t an issue: “It’s very rare that we spend six hours apart from each other,” Pearce says. “We were so focused on making this record that there was not a lot of space for really hacking each other off.”

They finished Expert on the road, when the band returned to the U.S. at the start of this year. The Beths grappled with the same challenges many young bands faced while touring during the pandemic, following strict protocols from wearing masks to making sure their crew stays in a bubble. In late April in England, Pearce got Covid. While most bands would reschedule their tour dates, the band couldn’t afford to postpone — so they played four shows as a power trio instead.

Reflecting on that time, Stokes gets quiet. “I was scared that people would be bummed out because it’s not really the same,” she says. “But it was something different, and maybe that’s OK.” Pearce steps in and supports his partner: “I think you’re slightly understating just how big a feat it was for you, and how brave it was. I’m just wowed by your ability to just step up and do it. You did such a great job.”

THE TITLE TRACK opens the album, kicking off with a fuzzy riff that sounds like an electric current too powerful for its conductor. The chorus (“How does it feel/To be an expert in a dying field”) is whimsical and relatable for people pursuing many careers besides indie-pop, but the meaning of the song cuts deeper, as Stokes ruminates on past relationships. “I can close the door on us,” she sings in the first verse, “But the room still exists/And I know you’re in it.”

“When you’re young, you have all these friendships and family and romantic relationships,” Stokes says. “You get older, and people move away or you lose touch because you’re busy. You feel the sense of loss for the relationships that you used to have, and the friendships that are different now, or maybe people are gone. There is a grieving for things that have changed.”

But because this is a Beths song, that grieving is masked by pure adrenaline, making it almost certainly a classic that will be sung by future generations at Beths concerts to come. And if there’s one thing the pandemic taught them, it’s that each member can’t do it alone.

“I’m useless at playing by myself,” Pearce says, turning to face Stokes. “In the post-apocalyptic future where we have to play for our dinner, I’m going to need you to sing the songs, because otherwise, I’ll starve playing my one-note guitar solos for nobody.” Stokes smiles: “You’ll want to bring that penny whistle.”