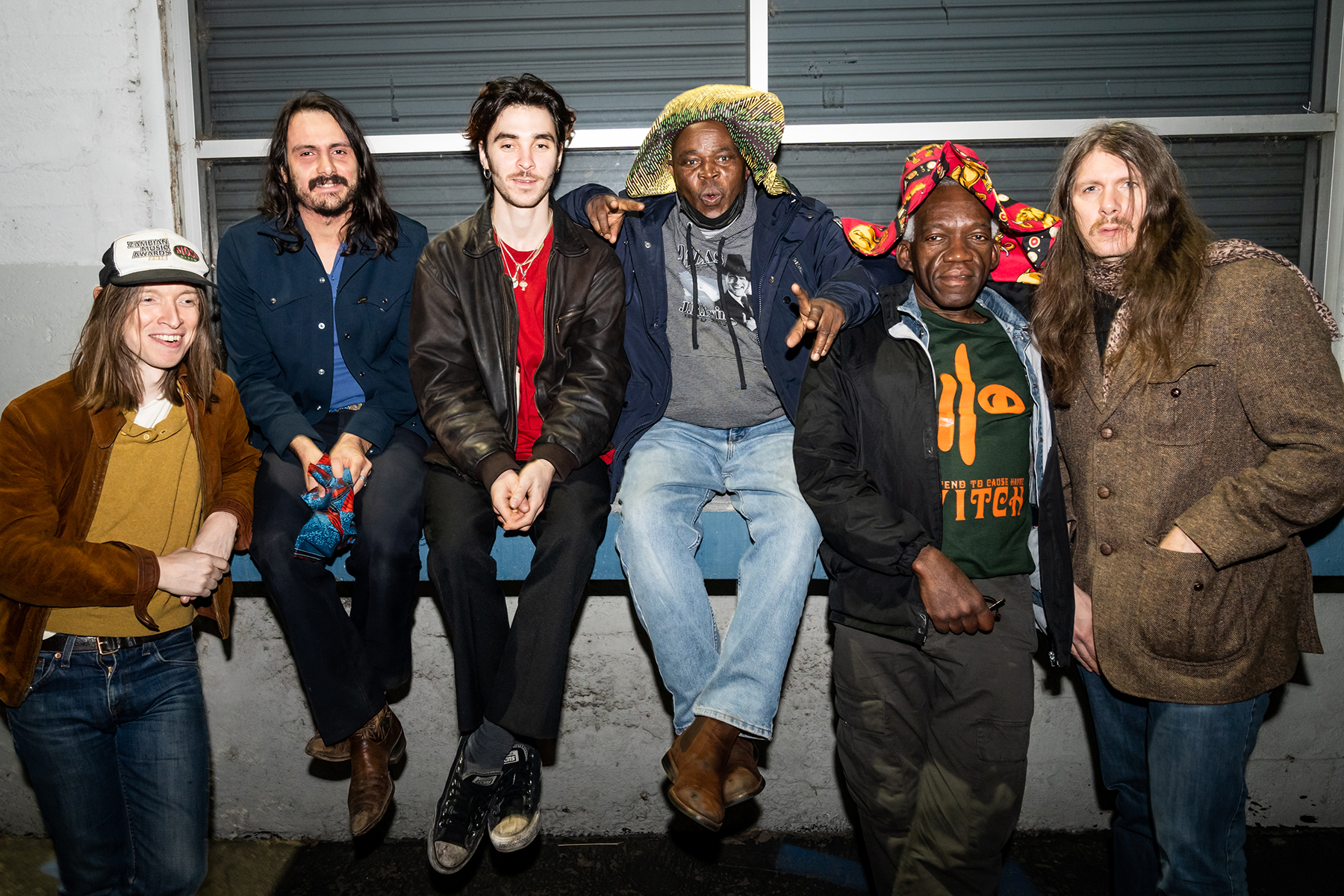 On the outskirts of downtown Los Angeles, inside a hulking, graffiti-bedecked industrial building, a distinct lilting reverberates through sterile halls. Behind one of the many nondescript doors is Witch. An acronym for “We Intend to Cause Havoc,” the 1970s psychedelic rock band from Zambia, which helped establish the genre known as Zamrock, is rehearsing for its first U.S. tour since the pandemic began. More than that, Witch are looking to recommence a remarkable story of resilience and resurrection.

In the cramped rehearsal space, the band members, jet-lagged and hungry, play with effervescence while donning their iconic floppy hats. Worn by the original members in the Seventies, these psychedelic witch hats are made of vibrant Zambian chitenge cloth, and were not only worn for style, but also as a way to quell their stage fright — the long, skirtlike brims forcing them to focus on the music instead of the crowd.

After establishing a following in Zambia as well as in Tanzania, Malawi, Zimbabwe, and Botswana in the 1970s, the band slowly dissolved in the Eighties and eventually stopped playing altogether. Chiseling for amethysts in a dirt pit in Zambia, co-founder Emmanuel “Jagari” Chanda, now 70, thought his days of performing were over. Then in 2012, Now Again Records reissued Witch’s entire discography, sharing their long-forgotten albums with a younger generation. The final catalyst of Witch’s comeback began in 2014, when Italian filmmaker Gio Arlotta started working on a documentary about the band called We Intend to Cause Havoc, which was released in 2019.

The film — full of Zambians sharing bygone Zamrock stories, punctuated with smiles and dancing — ends with a newfangled iteration of Witch led by original members Jagari (vocals) and Patrick Mwondela (keyboards) playing across Europe with a new, younger crew of bandmates. This unexpected revival led Witch to their first-ever European and U.S. tours, in 2017 and 2019, respectively, both of which were successful. Witch finally garnered the international acclaim they should have had more than 40 years ago.

There was a newfound hope that Jagari and Mwondela may finally actualize their long-defunct dream of a career in music. Then the pandemic hit, putting them back on an indefinite hiatus. Now, their second resurrection has finally come as the band has happily reunited stateside. On their current U.S. tour, Jagari and Mwondela are joined by bassist Jacco Gardner, drummer Nico Mauskoviç, and guitarists JJ Whitefield and Micheal Rault. Alongside tour dates in cities including Los Angeles, Las Vegas, and Denver, Witch will play at the South by Southwest festival on March 16 and 18.

Rolling Stone caught up with Jagari and Mwondela, the last surviving members of the original Witch lineup, to discuss life after the documentary, how they were affected by the pandemic, the challenges of being a musician in Zambia, and more.

What happened after the documentary came out in 2019?
Mwondela: We really wanted to put down the history of Witch because nothing was documented. The band was before the internet. But I think what has surprised us is that it started to build momentum and people are beginning to know about the genre Zamrock. It’s been growing over the last few years and I think something is brewing, and we’re just waiting to see what the next season is gonna be like.

How did the pandemic affect that momentum?
Jagari: It affected me a bit, what I saw on TV, a lot of people dying. But that didn’t stop me from creating music. I always try to compose as ideas come. Fortunately, I come from a country where music is abundant — from 72 ethnic groups. Naturally, the pandemic affected a lot of people, including the arts and music in particular. But I think it had a positive side. I keep thinking that it was an opportunity for musicians, because while people were locked down, they needed to listen to music to keep their minds away from what was going on around them. I think that music was soothing their souls, their spirits. And they kept going because at times they listened to songs that reminded them of people and times when they were in high spirits.

In the documentary, you mentioned that it’s nearly impossible to have a career in music in Zambia because of the lack of resources and infrastructure for musicians. Has that changed at all?
Jagari: Very little has changed. A musician depends on two things: The population of his country and the economic situation of his country. Your country shouldn’t be struggling between buying a CD and buying a meal. Even though I’ve seen some improvement with the young musicians that are coming up, a lot of musicians are struggling because we don’t have an industry per se. There’s no record shop. The only one that was there closed down, and I don’t know how they’re selling their music — maybe online or something. In Nigeria, they are a population of about 200 million. There, if you make one good hit song, maybe at least a million people can buy a record and it gives you time and space to create more, instead of you waking up in the morning and thinking, “Where do I get my next meal?” Or looking for people who can help you survive.

There are very few musicians of my generation that are living on music today. Most of them were good musicians, but they never recorded their works. We did what we could. We were surrounded by countries that were fighting for their political freedom and we were the frontline state. South African authorities would come and bomb freedom fighters in Zambia. And then the president of the time declared curfew and blackout. That means if you go to a show at six in the evening, you can’t come out until the following day. If you’re a band, you can’t manage that, so we sometimes performed during the afternoon, and since there’s no beer and it’s only for youngsters, you didn’t get as good a crowd as if you played at night.

Then AIDS came in and took a lot of people, not just musicians. It’s easier to say musicians died because they’re more famous than soldiers and teachers, but every aspect of life was affected by that scourge. Now there are very few musicians living from back then, so it’s difficult to carry the genre of Zamrock. If they were around, we would’ve showcased what was happening there in its original form. But nevertheless, we are still representing the era.

Are you currently living on just music?
Jagari: I haven’t yet started living on music, but there’s a light at the end of this tunnel. I have this feeling that God has given me another chance. Another lease on life for me to start touring again. This chance will take me far, that’s what I believe. I’ve got this spiritual conviction that our lives have been preserved for a bigger thing — to showcase what our country has in terms of music.

Well, it sounds like Zambia has a lot of music to showcase. Are you still mining for amethysts?
Jagari: I am still a small-scale miner. Somehow they have not renewed my mining license, but I don’t usually force matters. I try to pursue to the best of my ability to have my license back, but at the same time, some people want to take through corruption, through dubious ways. Even though mining is not my passion, if it can rake in a few kwacha, that’s our currency, and a lot of dollars and pounds, that would be nice. Because I would love to own a recording studio and a school of music, and maybe something related to creating music and sharing the ideas with the youngsters, who can carry on the baton when we pass the torch.

What about you, Patrick? What are you up to when you’re not touring or performing?
Mwondela: In the late Eighties, when everything died down with the band, I moved to the U.K. and went back to school as a mature student. I studied computer systems and management, and ended up working for the National Health Service, which I’ve done for over 20 years. I retired eight years ago, but I work as a freelance consultant, so that’s helped me to finance my passion for music.

How has resurrecting Witch affected your life?
Mwondela: I think it’s really started something. We’ve both been on a journey and the fact that we are alive today, I begin to understand that we had a story to tell and it’s only just beginning. There’s another phase. I feel that musically, I haven’t exhausted what is in my heart to express. What I share is music and life. I really enjoy talking to people. Often as a star, people will come and worship and praise you, but I turn it around and say, “How about you?” And I’ve seen people glow and appreciate that. It’s just wonderful to impart life to the people that we entertain. It’s all about people.

I love that you’ve been performing all the classic songs by the original Witch group, songs like “Lazy Bones,” but can we expect to hear any new music with this current band?
Jagari: The whole group is contributing towards making some good new music, maybe an album. When we meet, we share ideas. When we go away, we are still in contact. We have perfected a few new songs that we will be playing on tour.

Jagari, do you hope to create more opportunities for musicians back in Zambia?
Jagari: I do small mentorship programs here and there, but it’s not a permanent feature. Let me confess that at my age, I would be more at ease creating and performing music than doing anything else, because the music touches my soul. It’s different from working anywhere else. Music is like wine — the older you are, the better you become. There’s hope that the small mistakes we were making while we were young, we can perfect. And even though there’s no real perfection, you can bring international acceptance, because I believe there is no bad music. There’s no good music. The standard is the quality of the music that you put out there, how creatively you put it out there and how unique your music is. The world is there, waiting to listen, as long as you can be yourself, be creative and be unique. That’s my hope — that I can leave that banner somewhere out there.