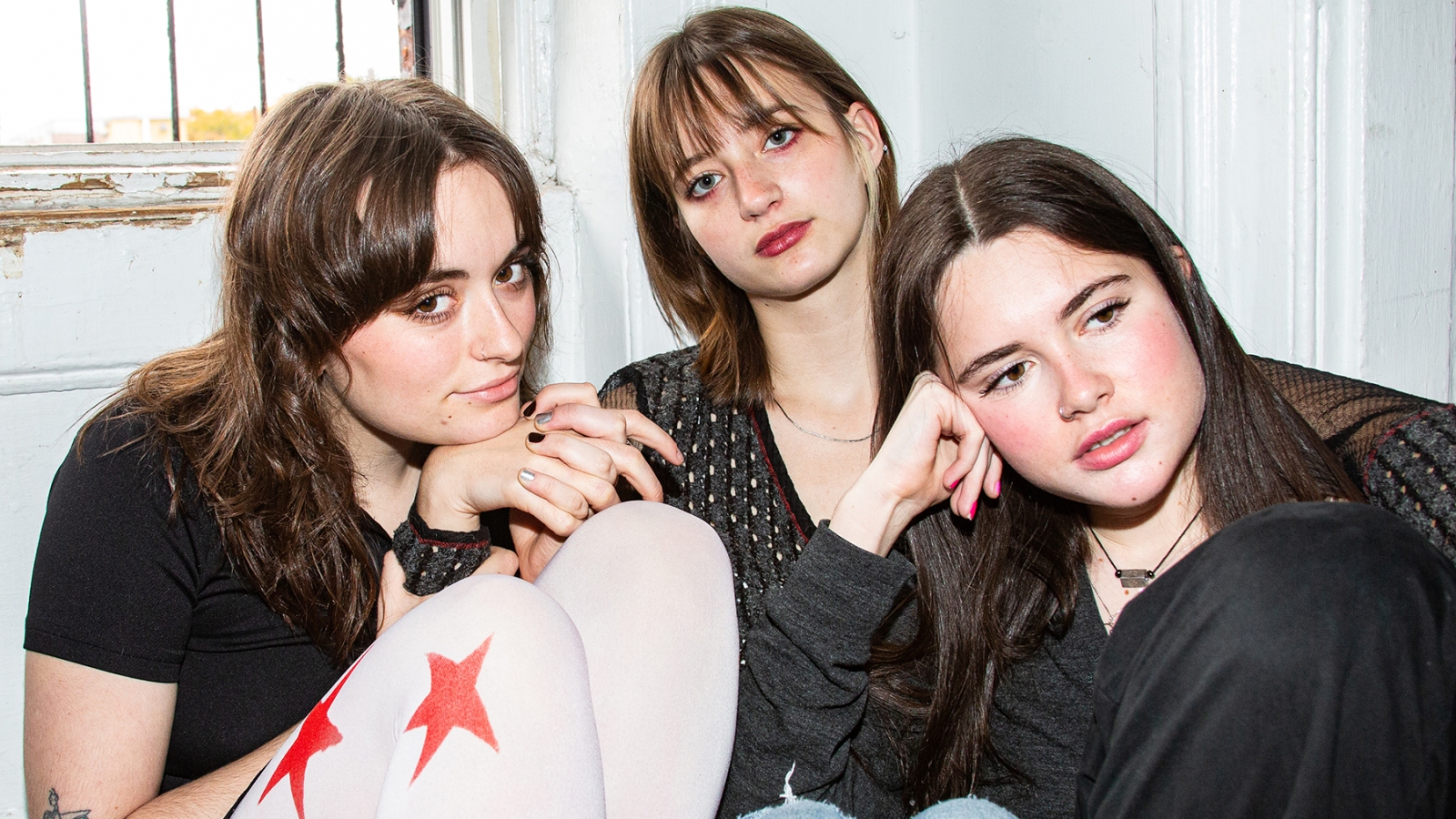 They say that rock is dying, guitar solos are old news, and kids today don’t like that kind of noise. OK, sure — but have they heard Hello Mary?

The New York trio’s self-titled full-length debut, out March 3, is a blast of distorted chords, sunny harmonies, and all-consuming angst that will renew your faith in the hopelessly dated and/or timelessly classic sounds of alternative rock. Hello Mary is an instant contender for 2023’s most bracing entrance to the stage, sharp and self-assured. Oh yeah, and the band’s two founders — singer-guitarist Helena Straight and bass player Mikaela Oppenheimer, both 18 — just graduated from high school this summer.

Drummer Stella Wave, 22, admits her expectations were low when someone first sent her a link to the songs that Straight and Oppenheimer had been writing as a twosome. “They were both 15, and I was 18,” says Wave, who was a college freshman in Westchester County at the time. “I don’t know how much you remember about that dynamic, but it feels huge. When I realized how young they were, I was like, ‘This might be kind of weird.’ But then I listened to the demos that they put on SoundCloud.”

She was intrigued enough to come meet Straight at her parents’ house in Ditmas Park, Brooklyn. It didn’t go very well. “Helena opened the door and was so quiet,” Wave says, laughing. “She was so painfully shy. We practiced and it felt like pulling teeth, honestly, to get any reaction. She later told me that she almost canceled on me because she was so nervous.” (“I freaked out because she was older,” Straight confirms.)

Straight and Oppenheimer had been close pals since middle school, when they met through an extracurricular program for musically inclined Brooklynites. Both of them were introspective kids, and they bonded over mid-2010s favorites like Courtney Barnett, Car Seat Headrest, and Twin Peaks — “classic indie stuff,” Straight says — along with older picks from the decades before they were born.

“I remember when Neutral Milk Hotel came on my Pandora for the first time and I was like, ‘This is crazy,’” Oppenheimer says.

“And I was like, ‘Oh my God, my dad plays this all the time,’” Straight says.

Their taste was highly unusual in their peer group, where Top 40 pop ruled the day. “I still love Taylor Swift — I’m sitting on a Taylor Swift blanket right now,” Straight says. “So I could relate to people that were into that stuff. But Mikaela and I had a separate connection that we didn’t share with anyone else.”

Soon they’d broken off from the other students in the music program to start Hello Mary, which became the main focus of their early-adolescent lives. They’d spend hours at Straight’s house practicing in the basement as a duo; in the summer before ninth grade, they went up to the tiny attic to record some demos with Straight’s dad on drums.

Wave, a few years ahead of them, had grown up in another part of Brooklyn on a similar diet of parentally approved guitar weirdness. She recalls listening to “a lot of Pavement” — her mom’s favorite band — along with Luna, Galaxie 500, Yo La Tengo, and more. “I remember in elementary school being embarrassed because my mom DJ’d some Valentine’s Day dance, and having a talk with her before: ‘You can’t play your music. You have to play pop hits so that the kids like me,’” Wave says. By her own teens, she was getting into heavier bands like Nirvana, Smashing Pumpkins, and the Breeders.

After that first, inauspicious meeting, Hello Mary’s trio lineup clicked quickly. Wave, who had more experience being in bands, became their booking agent as well as their drummer and backing vocalist, getting Hello Mary slots at house shows and local venues like the Bitter End and Trans-Pecos in the weeks after she joined. “We literally played six shows in a month,” Wave says. “I was taking every show that we got offered or that I could book.”

The idea was to get the younger members of the band comfortable with live performance. “It helped a lot,” Oppenheimer says. “It was overexposure to what we were scared of.”

“God, I was terrified,” Straight adds.

A handful of early songs recorded DIY-style around this time made it onto an EP called Ginger that they released online around the start of 2020. A few months later, the first wave of pandemic shutdowns gave them time to develop their songwriting further.

“I was heavily depressed during Covid, obviously, as most people were,” Wave says. “When you’re trapped in your house all day, what else is there to do besides write songs and be so excited to have band practice?”

All three members of Hello Mary write on acoustic guitar, often piecing together bridges and verses from different drafts to form a complete song. Straight wrote the tightly coiled single “Evicted” (“I’ve been evicted from the sun/Going out today was a grave mistake”) about the tense feeling of those early pandemic days: “It’s completely about Covid,” she says. On uptempo album highlights like “Rabbit” and “Special Treat,” her electric solos cut through the noise with raging clarity.

Oppenheimer, who spent the first part of 2020 upstate with her family, adds a crucial dimension to all of Hello Mary’s songs with her flexible, melodic bass lines. “When Mikaela finally came back and we were able to play, the songs sounded completely different,” Wave says. “They opened up. It just did not sound as good when the two of us were playing them.”

They recorded their full-length debut with veteran indie-rock producer Bryce Goggin, who encouraged them to keep going until they nailed each take. “He’s like, ‘Let’s do one more. Let’s just see,’” Straight says. “Which didn’t happen before.”

“I’m probably going to drop out pretty soon,” Straight cuts in. “I can always go back. Right now, I just want to grind the band and fucking do that. That’s all that I care about.”