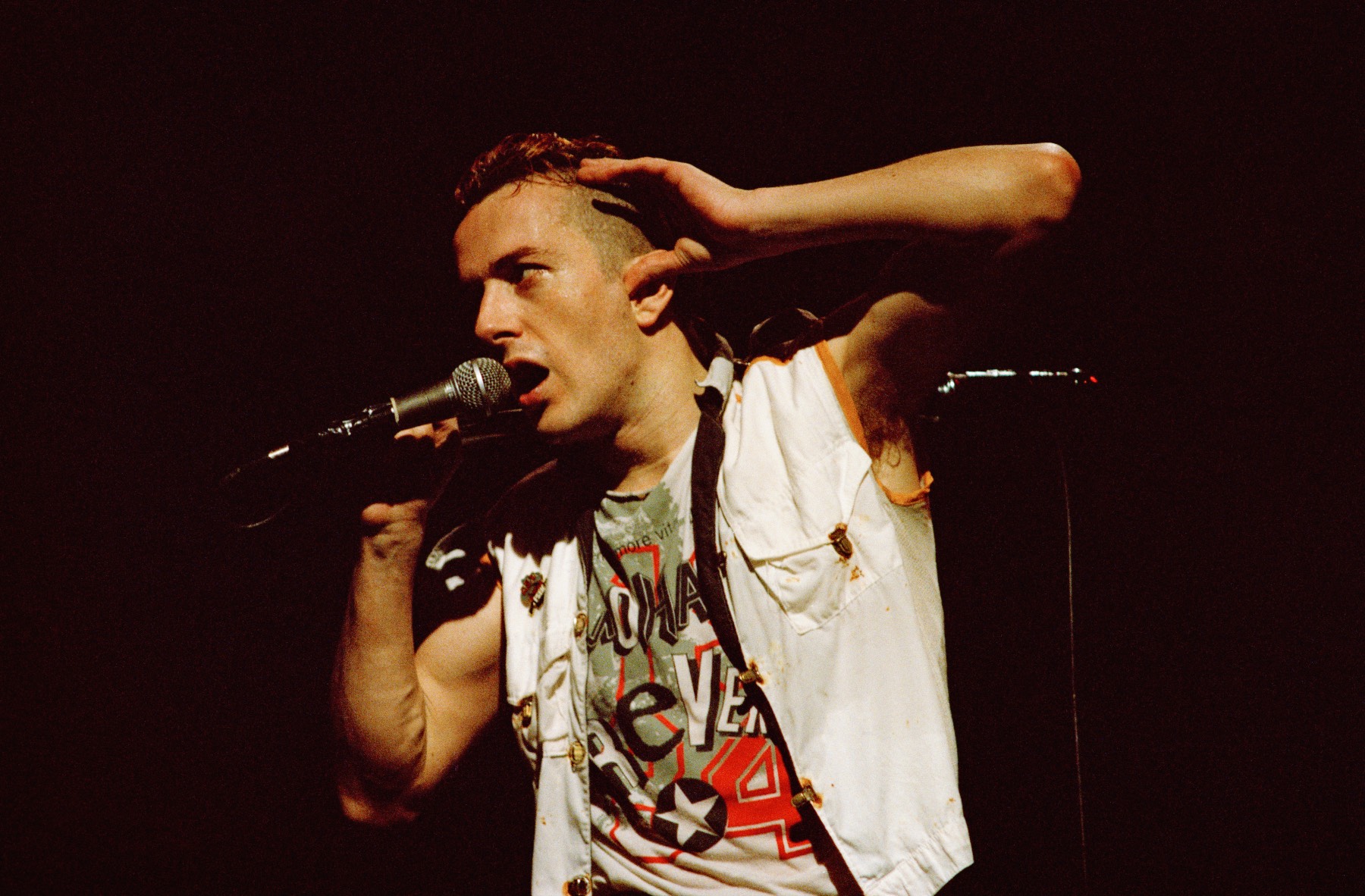 During the time she was married to Joe Strummer starting in 1995, Lucinda Tait would often hear her late husband at work in the kitchen of their house in Broomfield, in southwest England. “He had a typewriter, an old-fashioned one that would go ‘clack clack,’” Tait recalls. “When I went to sleep at night, I’d be upstairs and hear him tapping away at the kitchen table.”

Strummer’s wildly influential former band, the Clash, were long in the rear-view mirror by then, and Strummer had recently formed his latest combo, the Mescaleros. But Tait wasn’t fully aware of what her husband was working on, there or in his home studio, until after Strummer died in December 2000 at age 50 (of cardiac arrest due to an undiagnosed heart condition).

“The so-called archives were just stuff that was everywhere around the house and in his studio, and boxes open to the elements in the barn,” she says. “His life was a series of plastic bags. There were journals, endless tapes, his cartoons. He kept everything. He was a squirrel.” Also uncovered were cassettes Strummer would make of local radio stations when he was on tour and even all the copies of his set lists.

Spurred on by the artist Damien Hirst, a friend who initially suggested packing up and curating Strummer’s archives, and then another artist, Robert Gordon McHarg III, the process of weeding through and cataloguing it all began soon after. The first culling was heard in 2018’s Joe Strummer 001, a collection of tracks and rarities from his life outside the Clash. But with the help of David Zonshine, who has worked with the George Harrison estate and now manages Strummer’s, a far deeper dive into those boxes and plastic bags began.

“I walked into a room and there were 100 or more masters — cassettes, DATs, four-tracks — sitting there,” says Zonshine, who is based in L.A.. “I ended up taking four full suitcases back with me to get everything digitized.”

The latest yield from that excavation arrives via a new box set in September: Joe Strummer 002: The Mescaleros Years collects the two albums he cut with the Mescaleros — 1999’s Rock Art and the X-Ray Style and 2001’s Global A Go-Go — and the posthumously compiled Streetcore, plus a disc of B-sides and rarities of Strummer’s post-Clash work. Among the tracks on the latter is a remake of Johnny Rivers’ “Secret Agent Man,” which Strummer cut and submitted for either the Vin Diesel action movie XXX or, as Tait believes, an Austin Powers sequel. Alternate versions of solo faves like “Coma Girl” and “Tony Adams” and his ventures into dancier, more electronic rock are also included.

A 1999 home demo of “The Road to Rock ‘N’ Roll,” a folk march written for Johnny Cash, finds Strummer warning, “If you don’t believe in good and evil/You better tell the devil why.” An accompanying booklet features some of Strummer’s handwritten instructions for album packaging (“When you turn over CD, you see names big”) and to himself (“We will finish this record”), along with correspondence to colleagues sent by way of his favorite old-school form of communication. “He loved the fax,” Tait says. “He used to draw on them as well.”

And there are plenty of other gems in the vault, to potentially be released later. They include journals that Strummer kept during the making of the Clash albums, which feature notes on song tweaks as well as multiple early drafts of classics like “London Calling.” One of Strummer’s last shows with the Mescaleros, at London’s Brixton Academy a month before he died, was filmed in its entirety by director, DJ, and former Big Audio Dynamite member Don Letts.  And then there’s an entire collection of covers of Fifties rock classics like Gene Vincent’s “Be-Bop-a-Lula,” Buddy Holly’s “Rave On,” and Bill Monroe’s Elvis-associated “Blue Moon of Kentucky.” Whether Strummer was planning an actual album of these remakes or just goofing around in the studio is unclear.

Forty-five years after the Clash’s debut album, Strummer remains best known for his work with that revolutionary band; shortly before his death, he and the group were scheduled to be induced into the Rock and Roll Hall of Fame. After the band dissolved in the mid-Eighties, Strummer made 1989’s poorly received Earthquake Weather and then, in the eyes of most of the general public, vanished, only popping up to act (the 1989 Jim Jarmusch film Mystery Train), DJ, or produce or sit in with the Pogues and other bands. “When I first met him and asked why he wasn’t making music, he said, ‘It’s because I’m tied to a horrible contract with Sony,’” says Tait. “George Michael at the time was taking Sony to court and trying to get off the label, and Joe said, ‘I’m gonna go stand outside Sony headquarters with a banner supporting George!’”

Starting at the 1995 Glastonbury festival and continuing at other gatherings, Strummer began to reconnect fully with his muse. An avid parent, Strummer had previously taken his daughters (two from a previous relationship and a stepdaughter with Tait) to Glastonbury — even to Disneyland, where he joined them on the teacup rides and It’s a Small World. But that year, Tait says, “We didn’t have the kids all the time — we were co-parenting.” That left Strummer more time to wander the Glastonbury grounds, where he became enamored with the itinerant, tent-and-campfire lifestyle of musicians like Happy Mondays.

“He liked the off-the-grid beliefs, and that you don’t have to toe the line,” she says. “It made a lightbulb go off in his head that he could incorporate all this incredible knowledge he had of world music, like North African music. The music he was putting out was mostly rock-based stuff. But this was a magical moment, like, ‘Hey, I can branch out and absorb.’”

As far as reports that Strummer discovered ecstasy during the time, Tait scoffs: “He had a couple of pills at a couple of festivals, but I don’t think he was on ecstasy, no,” she says. “That wasn’t Joe. Maybe it opened the door a little bit , but that was it — it wasn’t something he did.”

According to Tait, Strummer, who adapted to the country-living part of his life, was in no great rush to reunite the Clash just for the money. Strummer turned down at least two offers to reform the band. “They were friends and we saw them socially, Paul [Simonon] certainly at the time,” she says. After mulling over one such offer, he invited a festival head to his country home, hours away, only to tell him that he was not going to reunite the Clash but instead form the Mescaleros.

In the months before his death, Strummer seemed creatively revived, Tait says. He’d recorded Bob Marley’s “Redemption Song” with Johnny Cash and Rick Rubin in Los Angeles, was prepping a new record, and was still doing shows — even performing his old Clash songs. “When you’d go see the Mescaleros and they’d play a Clash song, you’d see how much the audience loved it,” Tait says. “I often wondered what it would have been like to see the Clash.”

But generally, Tait says, Strummer was “in touch with what he loved. He was going back into the studio. Then it was Christmas.”

On Dec. 22, 2002, Strummer walked his two dogs, came back home, and collapsed in his kitchen “The doctors explained it would have been like taking the plug out of a socket,” she says. “His heart just stopped.”

The passage of time hovers over Strummer’s archives and the new box set. Rock is no longer cutting-edge as it was during Strummer’s heyday with the Clash, and he and the Clash may barely be known to music fans born this century — adding an urgency to what was merely an excavation process. “For the young people who aren’t familiar with his work, it’s important to get it out there,” Tait says. “A lot of Clash fans are in their seventies and Mescaleros fans are in their forties and fifties, so it would be nice to reach younger people. What he had to say is even more relevant today.”