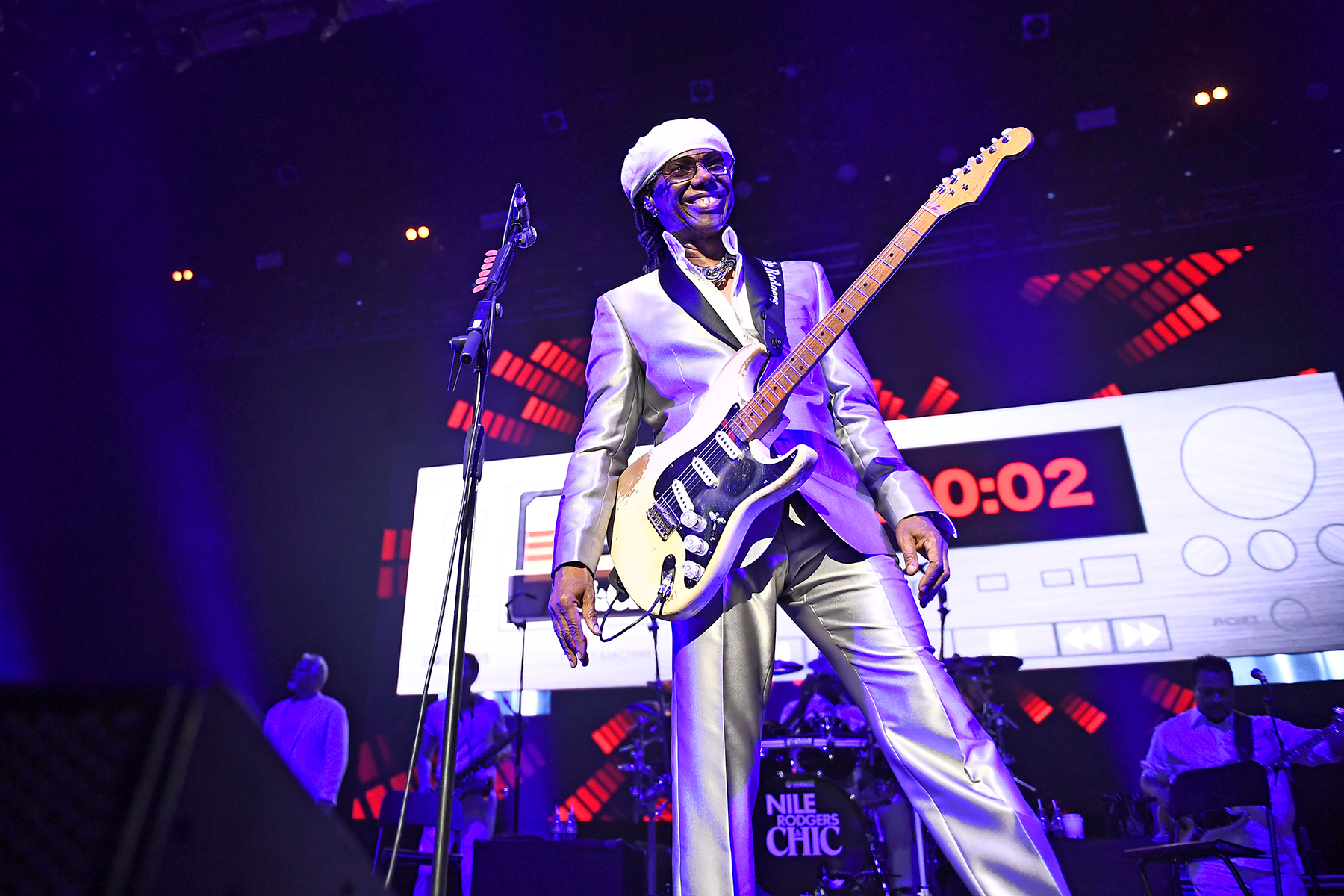 When considering Rolling Stone’s list of the 200 Greatest Dance Songs All Time, one name kept popping up while examining decade-after-decade of hits: producer and guitarist Nile Rodgers.

The Chic leader says he owes his entire dance-music career to three songs. One night in the mid Seventies, he went to a club in Manhattan’s Greenwich Village and at one point, the DJ played the winning trifecta of Donna Summer’s “I Love to Love You Baby,” the Village People’s “San Francisco,” and Eddie Kendricks’ “Girl, You Need a Change of Mind” — “in that order,” Rodgers says. Up until that moment, he was a self-professed “straight-up jazz guy,” but when he saw the place explode to those tunes, he became a dance-music disciple. “As much as I loved the songs, I never saw a crowd so loving and having so much fun,” Rodgers, now age 68, remembers. “Now, of course, it was in the Village, so it was a black crowd, a Puerto Rican crowd, a gay crowd, an Asian crowd — it was amazing. It was, like, totally immersive that night. So it got me into dance music.”

From that point forward, Rodgers and his bandmates in Chic dedicated themselves to disco. Their first two singles, both released in 1977, were “Dance, Dance, Dance (Yowsah, Yowsah, Yowsah)” and “Everybody Dance,” and before the decade was up, they had scored two Number One hits — “Le Freak” and “Good Times.” As a producer, Rodgers contributed to dance-floor–ready hits for Sister Sledge (“We Are Family”), Diana Ross (“I’m Coming Out”), David Bowie (“Let’s Dance”), Madonna (the entire Like a Virgin album), and Daft Punk (“Get Lucky”), among dozens of others. “I read that ‘Get Lucky’ was the most-played record of that particular decade, which is incredible to me,” Rodgers says with a laugh. “Actually I’ve had a couple of those where they were the most-played record of the decade. I think to myself, ‘Who even counts that?’”

Although Rodgers is more of a roller skater than a “regular dancer” (“On roller skates, I kick butt,” he says totally seriously), he has come to feel naturally what makes a good dance song. “I think if the combination of ingredients of a song sparks a primal response, like it makes people want to dance — they don’t need to know what the song is about or anything like that, just the groove or the vibe — that’s what makes a great dance song,” he says on a Zoom interview, seated in a room surrounded by his innumerable gold and platinum plaques. “It’s just that thing that just hits you.”

Here are 11 of the songs that have hit Rodgers the hardest with his commentary about why they’re his favorites.

Technotronic, “Pump Up the Jam”

If I was going to think of just my favorite just jam, where you just walk in and you hear it and you’ve got to run to the dance floor, it would be, [raps] “Pump up the jam, pump it up while your feet are stomping.” It’s just so magical and so incredible that no matter how many thousands of times I’ve heard it, you still get the same reaction.

I also am a huge fan of the Philly sound and those diva records that came out, like First Choice’s “Dr. Love.” That song is amazing to me. Not only is the song great, but it’s just the vocal dexterity of [Rochelle Fleming] and First Choice that I love.

Just right from the very word go …. “I got the power!” It’s just one of those records that you definitely run to the dance floor instantly. I just absolutely love it.

Kool and the Gang, “Hollywood Swinging”

What’s great about all these songs is that they give you a signal to, like, stop whatever you were doing — you could be chatting with somebody, you could have a drink — and as soon as you hear [sings the opening fanfare of “Hollywood Swinging”] and they give you a minute to go, [sings] “bump bump bump,” you go to the dance floor. It’s, like, the bomb.

Even though I know sort of people might make sort of fun of it, because it’s such a great novelty record, “Party Rock Anthem” just rocks the house, man. There’s nothing about that record that isn’t captivating. It’s ridiculous, right? And even after they break into “Every day I’m shuffling” [whistles hook], everything about it is dope. It’s just, a really, really incredible record. And that’s what great dance songs are supposed to be.

Cheryl Lynn, “Got to Be Real”

I love Cheryl Lynn and the long version of “Got to Be Real”; I come from the era of 12-inches, so I’m talking about 12-inches. Almost every one of these records on my list just has these great diva vocals where they just killing. Not only is the band killing the track and the arrangement killing, but it’s also just something about those diva records just kills you.

Sister Sledge, “We Are Family”

Of course, I’ve got to throw in one of my songs. I have to put “We Are Family” on my list, and it’s not necessarily our best dance record but it’s probably the one that makes everybody go bananas. Once again, it’s the diva quality of Kathy [Sledge], and when the band breaks down and she just goes off and that was one take. She was inspired by the track, she just lit into it. She just jumped right into the track. And I’ve seen it all my life or since I’ve written it: DJs will play “We Are Family” and the dance floor gets packed.

Everybody always makes fun of my bangs, and they go, “Oh, yo, man, you look like Rick James,” so I’ll give Rick props. He always used to say to me, “You know, man, your hair is sort of like mine, except yours is real.” “Super Freak” is a great, great dance jam. We’ve played it together. It was a blast.

It’s another one of those records that was sort of like [Snap!’s] “I got the power,” and you get the great diva vocal.

I’ve played this with him. That was, wow, the night of my life. We had a blast.

She goes completely off on that. When you hear her just command that track, she just kills it, she just absolutely devours the track. And that’s the kind of record, when you’re in a band and you make a track and the vocalist comes in and does that to your song, you just feel like a million dollars. It’s like what Kathy did just to Sister Sledge, just to “We Are Family.” As we used to say, she peed all over that record. We thought it was really good until she came in and I just said, “You know, Kathy, you just made me a genius.” [Laughs]. What I wrote was cool. What you just did was so far over the top. And that was just one take, she was just so inspired by the track. And almost all these records that we’ve talked about have those kinds of incredible performances that I can imagine that they walk in there and they hear those tracks, and they go, “Damn, OK, baby. I just can’t wait to get to this part so I can go off.”