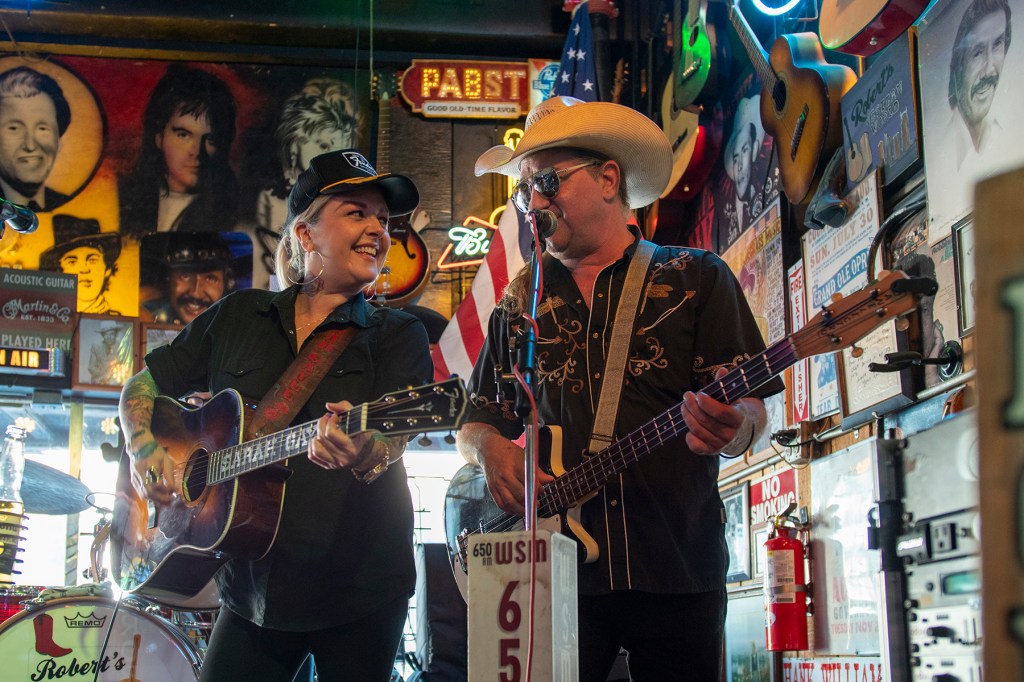 “The band was playing Marty Robbins and classic country I really liked,” Leigh says. “I thought, ‘Well, this is heaven.’”

Little has changed at Robert’s since then. Located amid a sea of party buses, nightclubs branded after contemporary stars like Jason Aldean and Florida Georgia Line, and cover bands playing Journey’s “Don’t Stop Believin’,” Robert’s Western World serves as a stubborn symbol of history and traditionalism in a city that’s become defined by aggressive development. Joshua Hedley, who’s performed consistently at Robert’s for 17 years, says people come to the club for that reliability. “They know what they’re going to get,” he says. “They’re going to get old Nashville, a real honky-tonk experience.”

“Robert’s Rhinestone Western Wear” opened circa 1992 as a boot and clothing store — boots still line the walls today — but the shop gradually transformed into a music venue that fostered influential country bands like BR5-49. By the time current owner Jesse Lee Jones took over in 1999, the bar had cemented its status as a honky-tonk haven. It’s the type of place you make a pilgrimage to.

Emily Ann Jones, Robert’s general manager and Jones’ wife, carefully presides over her husband’s preservationist vision. When a food rep tried to upgrade the bar’s ketchup to a trendy new brand, she was aghast. “I was like, ‘Oh no, what is this?’” Emily says. “We can’t do fancy ketchup, we’re Robert’s!”

She’s also regularly fielding, and turning down, offers to open new locations — in Texas, Las Vegas, in Nashville’s airport. According to Jones, any offshoot can’t be called Robert’s Western World. “There’s only one original,” she says.

That one-of-a-kind reputation is why rock stars like Sting and Joe Walsh all make a point to pop in when in town. But it’s the bar’s sturdy rotation of world-class musicians — from Hedley and Leigh to Sarah Gayle Meech and Jones’ long-running group Brazilbilly — that keep the heart of Robert’s beating, even as gentrification erases some of Nashville’s musical history.

“All these legendary places are going to get forced out,” says Hedley, who paid tribute to Robert’s by pressing his new album Neon Blue in bologna-colored vinyl. “Jesse is never going to allow that to happen to Robert’s. It’s nice to know it’s always going to be there.”