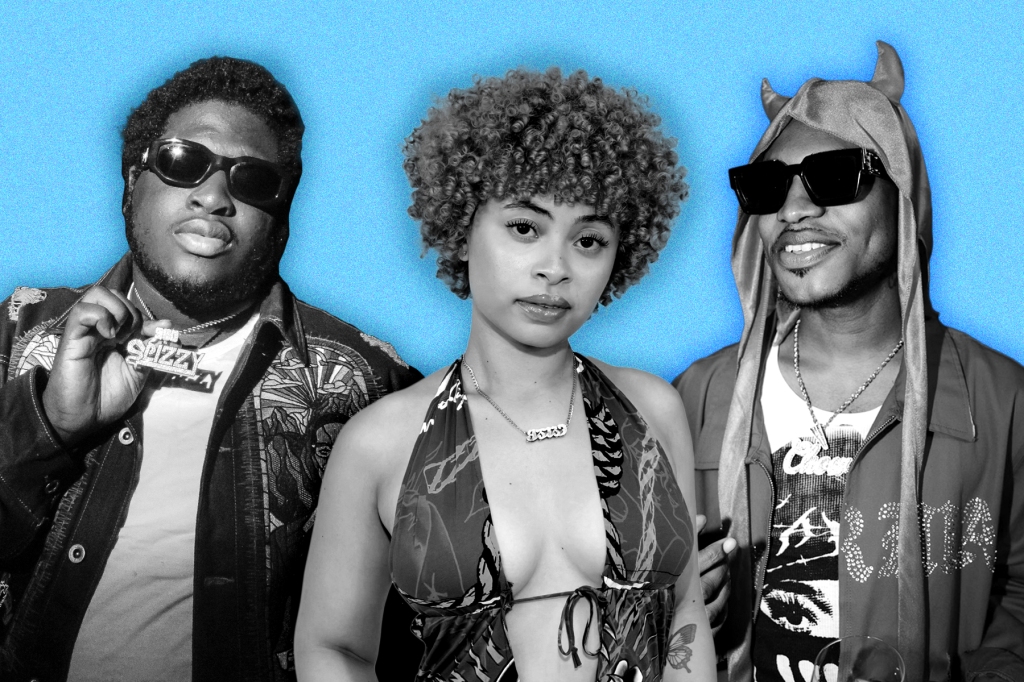 On a recent Wednesday night in Brooklyn, “Hey there, Delilah, what’s it like in New York City?” bellowed from the speakers at Baby’s Alright. Except, the indie rock band Plain White T’s was nowhere to be found. By the time Bronx rapper/producer Cash Cobain’s iconic tag dropped over the sample’s vocals, the venue was raucous and ready to hear him trade out singer Tom Higgenson’s sweet nothings with bars like, “you lit on IG, look better in your pics / one day you jack woo, the next day you jack blick” over crushing 808s.

He and his partner-in-rhyme Chow Lee were masters of ceremony during their roughly hour-long set of “sample drill” standards. A subgenre of drill, the music has the lighthearted and referential attitude of internet memes, but in audio form. Cobain has earned a reputation as New York City’s “sample god,” flipping well-known songs into churning drill rhythms.

Everything from Mary J. Blige (B-Loveee’s “My Everything”) to Tiny Tim’s “Tip-Toe Thru The Tulips” (Sleepy Hallow and Sheff G’s “Tip Toe”) is fair game for producers like Cash Cobain, EvilGiane, Great John, and others to pitch up, time stretch and filter under bulbous basslines and skittish hi-hats. It isn’t about chopping or otherwise manipulating a sample to fly under the radar; listeners recognizing a naked loop is the point.

The nomenclature, as such, is less important. Whether you call it sample drill or, like one of the night’s openers, “sexy drill,” it’s an irresistibly danceable genre. Throughout the night, artists like Tata, Lola Brooke, Baby No Lackin, and Lonny Love belied drill’s penchant for violent lyrics and close-to-home disses with downright horny lyrics on songs like “Vacant” and “Watergun” that roused the almost even distribution of men and women in the audience. At one point a woman in the crowd ad-libbed with Chow Lee as he crooned the raunchy hook to “Jenni,” which lauded a woman for being “splashy and gushy.”

“Ok! What else?,” she yelled towards the stage.

She, like the rest of the crowd, wanted more. Chow Lee was wearing a wide-open button-up shirt (with nothing underneath but a chain), while Cash Cobain wore a white Lanvin shirt and thick, white Louis Vuitton glasses. His eyewear evoked memorable images of artistic innovators Chief Keef and Soulja Boy in similar shades.

New York drill is an offshoot of Chicago’s massively influential movement, which has over time been reduced to a narrative of the city’s gang epidemic — a stigma that’s carried over to New York. But drill was always more than that. Artists like Keef, Durk, G Herbo, and later Pop Smoke became crossover stars capable of bringing casual fans to the drill sound. And the genre’s chief producers, like DJ L, 808Melo, and now Cobain, further tapped into that potential, creating soundscapes that could turn into hits with the right push.

Law enforcement has historically placed a glass ceiling on drill artists trying to establish themselves, mostly by canceling shows. Chicago’s Lil Durk and New York’s Sheff G are two in a likely wide glut of artists who’ve had their hometown police contact other departments and warn them about the artists’ impending arrival. The NYPD removed five rappers from the 2019 Rolling Loud festival for “public safety concerns,” and earlier this year, New York City Mayor Eric Adams openly contemplated banning the scene because of his perception that the genre’s violent themes were “alarming.” But Adams, ever the partygoer, has surely nodded his head to drill at least a couple of times at a function.

During Cobain’s headlining set, Long Island rapper Swoosh God returned to the stage while Chow and Cobain performed “Orgasm,” which meshes Jersey Club’s frenetic kick drums with drill. Swoosh eventually ended up getting into an onstage dance competition with fellow emcee Mali Smith. Anyone familiar with hip-hop history knows that hip-hop, and breakdancing, started as an outlet and alternative to violence. Now, 50 years later, amid the same economic inequality, another generation of Black youth are finding consolation in a sound that sometimes reflects their ugly realities — but can also be the soundtrack to the time of their lives. Why would anyone want to ban this?

Cobain’s boundless samples and Swoosh God’s club-infused sensibility are a reminder of drill’s potential. They are just a few of the many intriguing examples of drill shifting into new forms. Of a community of artists buried under red tape, bureaucracy, and racist pathology, that’s still able to find the light — all while subverting some choice morsels of Americana along the way.

So many classic songs came from an artist turning common parlance into a mission statement. The approach is difficult to master. It sounds hackneyed when it’s done wrong, but it always seems impossibly easy when it’s properly executed, like on Bronx rapper Ice Spice’s “Munch (Feelin’ U).” The hook, “you thought I was feelin’ you?” belongs in the canon of Lil Kim, Nicki Minaj, Megan Thee Stallion, and every other female lothario capable of dismembering the male ego with only a few words.

Produced by Spice’s frequent collaborator Riot, the song quickly went viral, with Twitter users referencing how much “you thought I was feelin’ you?” was stuck in their heads. On TikTok, a clip from the song’s music video garnered nearly 3 million views, and more than 200,000 videos have been created to the sound. The single might as well be the official soundtrack for any person living in the five boroughs hoping to go viral on the wildly popular video app.

“Munch” eschews the Bronx’s red hot sample drill craze for a brooding, two-note composition stanchioned under whirling percussion. But instead of Ice using the beat as a canvas for threats, the 22-year-old rapper glides confidently through the track like a windborne ribbon. There’s no love in the sky here, just Spice setting her terms and affirming that “bitch I’m a baddie I get what I want“ with the kind of seductive ease that makes it hard to doubt that she’s telling the truth.

Unsurprisingly, the Certified Lover Boy himself reportedly hopped in Spice’s DMs to tell her he enjoyed the song, as well as her Power 105 “On The Radar” freestyle. He also flew her to Toronto to attend his OVO fest. A strong breakout showing for the MC, who joins artists like Kenzo B, Young Devyn, and Jenn Carter as some of the most compelling women in the male-dominated New York drill scene.

A chief purveyor of so-called “sample drill,” Brooklyn-based producer EvilGiane is particularly adept at making his sample choices sound as dreamlike as a trip through nostalgia should. That’s exactly what he did on “Our De$tiny,” the A$AP Rocky single released mysteriously on the rapper’s Instagram. EvilGiane found the perfect nook of Destiny’s Child harmonizing on 2004’s “If” and spun it into gold. If Rocky hadn’t used the instrumental, it might have been a perfect score for a chariot ride through the skies. The song, which remains unavailable on DSPs despite trending on TikTok and Instagram, is another example of drill’s thematic expansion.

“There’s niggas like Pop Smoke that literally made drill what it is now, where people don’t have to be like, ‘Oh. I’m about to kill this nigga on my block,’” Evilgiane told Rolling Stone last fall. “Instead, he’d be like, ‘Yeah. I’m shopping at all the stores and shit.’”

Pop, who was on the way to worldwide stardom before he was killed in 2020, helped carve a path that artists like Cash, Ice Spice, and Jersey Club drill pioneers like Bandman Rill are now following. There’s nothing wrong with traversing drill’s grittiest corners. But if you’re looking for a thematic diversion, it’s out there. Just follow the sound of the triplet kicks.