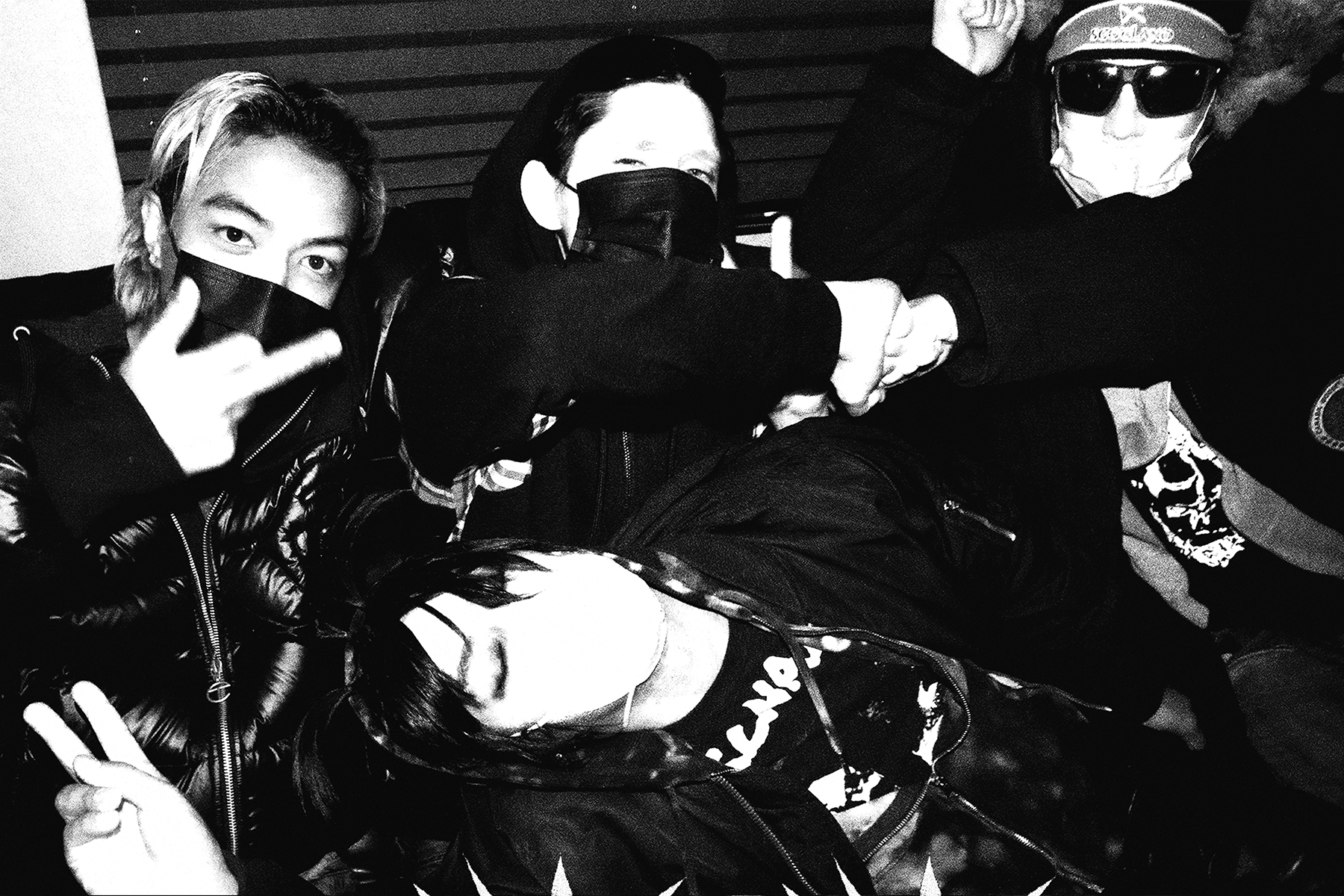 Last month, in the expansive parking lot of a door factory turned music venue in Queens, I found myself submerged within a throng of young people waiting to get into the second night of the Swedish music collective Drain Gang’s sold-out New York performances. The crowd chattered excitedly over one another, some chain smoking and a few filming TikToks. They all shared a specific aesthetic sensibility: nods to Y2K-era camp and goth-inspired pop-punk mixed with gender-neutral eyeliner, bedazzled sunglasses, and fingerless gloves. There were skater beanies in profusion.

The four members of Drain Gang — artists Ecco2k, Thaiboy Digital, and Bladee, as well as the producer Whitearmor — were touring together in the States for the first time. Thaiboy Digital typically records music with the group remotely, his Swedish resident visa ended in 2015 and he moved to Bangkok, where he’s since had a daughter. While they’ve all been able to visit one another over all these years, seeing the longtime friends together as a unit was enough to send most of New York’s under-25 population into a frenzy.

Just before their set of shows, Ecco2k and Bladee released their joint EP, Crest. The record is a soaring and rapturous triumph that feels like their most ambitious project yet. At times, straightforward songs unfurl to become ballads with elaborate and mercurial immensity. Delivered via Nordic-accented Auto-Tune, their lyrics reverberate with raw emotion: contemplative studies on love, pain, partying, and friendship that can verge on the poetically recondite, aligning with the canon of timeless literary crooners like Leonard Cohen or outsider musicians such as Daniel Johnston.

The EP’s anthemic opener, “The Flag Is Raised,” might very well be one of the best this year. An exhilarating and spiritually liberating homecoming, it symbolizes the announcement of a newfound chapter for the group. “I’m-I’m coming home, Virginia-inia,” Bladee, 28, croons. “I’m but a shell, baby, the hero is the soul.”

Like most anything made in our post-postmodern moment, Drain Gang’s music is an amalgam of YouTube-plundered references and incisive self-reflection. Yet the group doesn’t have the eager, trend-seeking energy of today’s shiny new young musicians, managing instead to find something organic in a world saturated in synthetics. For example, in order to record among nature, Ecco2k, Whitearmor, and Bladee drove to “the edge of Sweden” and rented a cottage minutes away from the cliff-bound beach of Ingmar Bergman’s fantasy epic The Seventh Seal.

Who else is making music that so directly embodies the mystifying and contradictory experience of being young and online?

A few days after the show, I meet the members of Drain Gang at a Brooklyn outpost of the luxury social club Soho House. Ecco2k, 27, a former designer for the Swedish brand Eytys, wore a pair of Gummo-style black bunny ears and elegant pink acrylics; Thaiboy Digital, 27, wore a Burberry plaid trucker hat over his shaggy bleached hair. We stick out like sore thumbs among the millennial freelancers working on their laptops.

“[We’re expressing] something really true to us, or something that we’re actually feeling. We’ve never compromised on that. We will always do what we want to make,” Bladee explains. “We’re all very different people. Just as people, not even necessarily creatively. But that’s what makes us so compatible together. The things that we make, and the way that we make things are always a direct result of our relationship.”

Drain Gang started around the time they were all in middle school. Bladee, Ecco2k, Thaiboy, and Whitearmor — née Benjamin Reichwald, Zak Arogundade Gaterud, Thanapat Bunleang, and Ludwig Rosenberg, respectively — started making music under the moniker Gravity Boys Shield Gang. Posting their songs and experimental, low-fi music videos online, their after-school hobby led them to a fortuitous crossover with another famed Stockholm collective, Yung Lean’s now-prolific Sad Boys. “Since we were young, [we’ve had] a collective world, or mythology. It’s always been so many inside jokes, and insular references, to the point where we could almost not socialize with other people at all,” Ecco2k says. “And I think we’re still very much like that. But now our common language and common ideas [are] something that we can pick from when we’re making stuff.”

The group’s multidimensional sound exists in a class of its own. You can hear elements of early Yung Lean-era “cloud rap” in the production — low-fi synths and drum-machine loops serve as a kind of sonic foundation — but the group ventures everywhere and anywhere, allowing a stream-of-consciousness mood to infect the atmosphere of an otherwise pop-inspired sensibility. Take, for instance, Ecco2k and Bladee’s single “Amygdala,” released in January. “I flirt with faith, I’m flirty/Crystal rings, my name/ Valhalla calling, fallin’,” Bladee coos. “Beauty and the Beast/I walk and star signs upwards, glory and the fame/Elysian fields forever, endless flowers sing the hymn.”

The lines are abstract, but it’s precisely this enigmatic quality that’s proven to be so compelling for listeners. Drain Gang have emerged as one of those rare acts that exist both in and for a generation. As such, the group has experienced a steady rise in notoriety and devotion over the past decade. Collectively, they described a “snowball” effect that occurred during the pandemic. Apparently young people quarantined at home were discovering their music, and becoming obsessed.

The group’s fans emphatically refer to themselves as “Drainers,” and their prolific dedication is clear if you take a brief scroll through the comment sections of Drain Gang’s YouTube videos, or if you take a look at the colossal volume of DG-dedicated meme pages. Drainers have responded to the group’s enigmatic body of work by forming a veritable ecosystem of their very own. Most of the listeners I spoke to discovered the group by way of memes at the onset of the pandemic, and only started listening to its music after the fact. A fan I messaged on Reddit told me that the group’s universe building is so immense that he felt one “could write a book about all of it.”

Perhaps you could say we’ve entered the most emotionally intelligent — or at least emotionally aware — era in recent history. Today’s generation of internet-saturated young people have all been encouraged to develop a deeper capacity for emotional nuance and expression via the digital realms of Instagram, TikTok, and Discord. And while this shift has rendered the scholarly definitions of terms like “gaslighting,” “love bombing,” and “toxic masculinity” next to meaningless, it is nonetheless impressive to see the ways in which the youth have managed to identify and communicate emotions in a world that can feel so difficult to just exist in.

As the swarm of Drainers outside the venue in Queens grew restless, the skies grew heavy with the imminent threat of a downpour before thunderously cracking open. The sold-out crowd would be baptized in the rain before gaining admittance. Eventually, with what felt like an entire generational cohort packed into the venue, Drain Gang took to the stage, opening with the euphoric and widely-beloved track “Western Union,” from their 2019 mixtape Trash Island. Watching sweat-soaked bodies thrash around in unison felt like a kind of blissed-out exorcism of the hellish past few years. Drain Gang’s members were preachers at the pulpit, and we were their devout acolytes, clinging to every line from the night’s sermon.