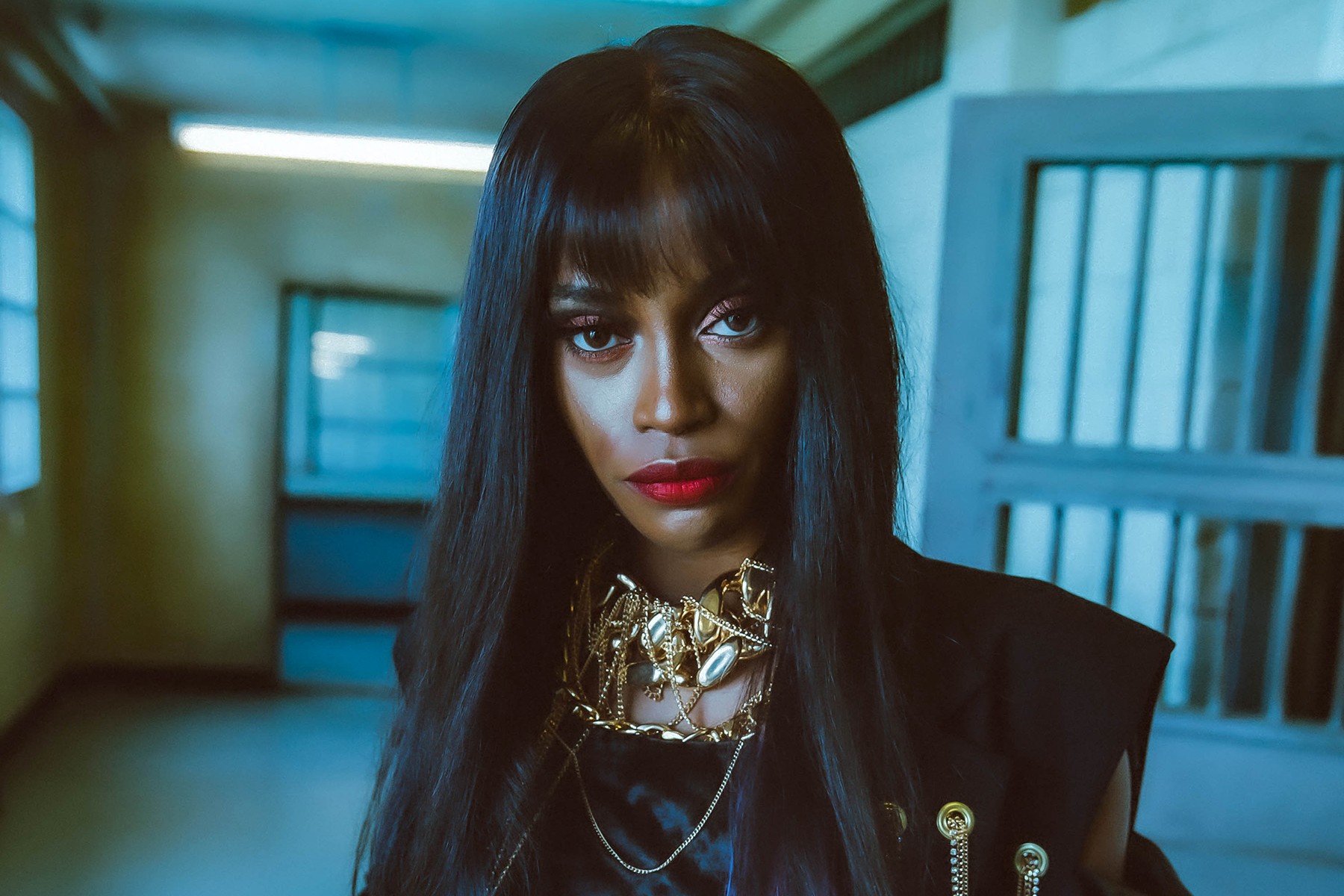 There’s a good chance Fatou Samba is just like you. The 27-year-old Aries, who describes herself as a Myers-Briggs ENTP to a T, enjoys watching anime, Korean dramas, and Dylan O’Brien movies — and above all, listening to K-pop. Like fans around the world, she first encountered the genre through a friend, quickly falling in love with popular South Korean acts like Shinee, SNSD, KARA, and 2NE1. She loved how the music brought “a lot of happiness and confidence back” into her life when she was feeling down. So she did something most K-pop fans only dream of doing: She became a K-pop idol herself.

Today, Samba, who performs under her first name, is the main rapper and lead dancer of the K-pop group Blackswan. Signed to the label DR Music, Blackswan is a new rendition of second-generation K-pop group Rania. The current line-up, consisting of four members (Fatou, Youngheun, Judy, and Leia), is part of a new crop of K-pop idols who came up during the pandemic. Their fall 2020 debut song, “Tonight,” brought the sounds and concepts of 2000s K-pop up to date — think the girl-crush aura of the Pussycat Dolls if they were G-rated and a little more pop-rock.

Fatou’s journey to becoming K-pop’s first African idol starts in her country of birth, Senegal, where she lived until age 12. She hasn’t been back since then, but she remembers her childhood there as being “so carefree, so fun” and filled with “a lot of delicious food.”

She spent her teen years in Belgium, where she learned to speak Dutch and English (she’s since largely forgotten her native tongue of Wolof). It was also where she was introduced to Korean music. At the time, Beyonce, Rihanna, and Michael Jackson were her favorite artists. Then, around age 14 or 15, a friend at school showed her Shinee’s “Replay” music video on their phone, changing her course entirely.

“I was like ‘Oh, that’s something I’ve never seen before.’ After school, I went home on my computer, searched it up and there was a whole other world of music,” she recalls. “K-pop is so bright, fun, and light-hearted, you know — all about being one and everything. That’s what really caught me [and] made me fall for it.”

She was interested in pursuing a life in music by this point, but she heeded her parents’ advice and went to college to study tourism. “Back when I was a teen, I actually asked my parents if I could attend a music school, but music is not a very stable [career],” she says. “They were like, ‘I don’t think that’s a good idea.’ So since I like traveling, I love languages and learning about other countries’ cultures, I chose tourism.” After spending two years in college, she left school around 2017 and decided to go on a month-long vacation to South Korea.

During her first visit there, she remembers feeling out of place. “I could not see any people like me,” she says. “I was like, ‘Oh my God, I’m sticking out so much,’ People would look [at] you [and] stare.” She hardly left her hotel at first, but by the end of the trip she’d made some new friends by walking around, visiting parks, and trying out the little Korean she knew.

Following that month-long trip, she returned home to Belgium and started working at an airport. After six months or so, she realized that she had to go back. “It was fun work,” she says. “But this is not something I could do for the rest of my life.” So she took a risk and left her job to return to South Korea, this time on a working visa.

Leveraging her passion for music and dance, she reached out to a crew that did K-pop dance covers. Coincidentally, the dance group she met up with also had a relationship with a modeling agency. One of the dancers suggested that Fatou, who stands at 5’7″, try out: “Why don’t you come back with me to the company so I can introduce you to the managers and everything?” After a successful meeting with those managers, she found herself signed to the agency just three weeks after arriving in South Korea for the second time.

In order to start working as a model, Fatou had to change her visa, which is not an easy process. “I had to go to Hong Kong to change my working visa to an E-6 visa,” she says, referencing an entertainment visa issued to foreign models, actors, musicians, and influencers working in South Korea. “All of that happened in the span of two weeks: getting the documents together, and going to Hong Kong. I think I stayed there for like two or three days, then I went back to Korea on my E-6 visa… It was quite hectic, but it was fun.”

Fatou went on to land modeling work including an in-store video commercial for Samsung’s A51 phone. Her time as a model gave her a taste of what it’s like to be in front of the camera. It was a short-lived career, though: About a month after signing with the modeling agency, she met with the CEO of DR Music. Founded in 1989, the label is best known today for its girl group Rania, which was later renamed and relaunched as Blackswan; in the Nineties, it housed Baby V.O.X, one of the most prominent first-generation K-pop girl groups of that era.

Leaving her modeling agency behind, Fatou signed with DR Music to become a trainee, a title given to pre-debut K-pop idols. After almost two years of training, she was revealed to be the fourth member of Blackswan and she officially had a debut date. Fatou walked into her experience as a new idol thinking it would be easy, but that wasn’t how it went. “Let me tell you the cold hard truth: It’s so goddamn difficult,” she says honestly. “But it’s all worth it at the end of the day.”

Aside from the stress, the pressure, and being away from family, she learned that the hardest part about being an idol for her is not being able to choose how people perceive her. Shortly after Blackswan debuted in late 2020 with their album Goodbye Rania, she found vicious comments and scrutiny as K-pop’s only prominent Black idol. “Sometimes [people] don’t think of idols as human beings,” she says. “They see me as… almost just a thing behind a screen. But I’m human and I have feelings.”

At one point, Fatou was ready to throw in the towel. “I almost gave up,” she says. “But someone else” — her fellow Blackswan members — “believed in me so hard that they [said], ‘You know what, no, we’re here for you. If you have a hard time, come to us, we’ll always be here. We are here, Fatou, talk to us.’” That overwhelming support from her group, in addition to friends and family, is why Fatou is still a part of Blackswan. She says she feels incredibly blessed and lucky to have “these amazing people in [her] life.”

Fatou doesn’t want to deter other Black people from becoming K-pop idols. “If it’s your dream, if you cannot do anything else, and you love it that much? Go after it, literally go after it,” she says — but she warns it’s not for the faint of heart. Being an idol is a job that requires work, dedication, and time away from your loved ones, and restrictions on travel due to the pandemic only made that harder.

“I don’t really think of it like, ‘Oh, I’m the only Black K-pop idol,’” Fatou adds. “I just do what every other colleague in this industry is doing. I try to stay as far away from that thought as I can, because I feel like if I would think about it, I would drive myself crazy.”

As Blackswan prepares for their next comeback, she is hoping to become more involved in the process of making her group’s songs. She has two more solo songs with beats made by K-pop artist Leanon (리논), who she’s worked with in the past, that are recorded and are waiting to be mixed. Aside from music, she dreams of a starring role in a K-drama, and appearances on Korean variety shows like Running Man and Knowing Brothers. “I’m manifesting it,” she says. “It is going to happen.”

Overall, Fatou speaks highly of the welcome she’s gotten from the K-pop industry’s fans and artists. The response from international fans, particularly those outside of Asia, is what’s been more mixed. “I think the international fans, a lot of them, have the same dream as me,” she says. “Seeing me achieve that dream while they thought for so long that it’s not possible…. I think they hold some grudge, or some type of maybe jealousy?”

She adds: “I’m just living my dream, man. You can say whatever you want.”