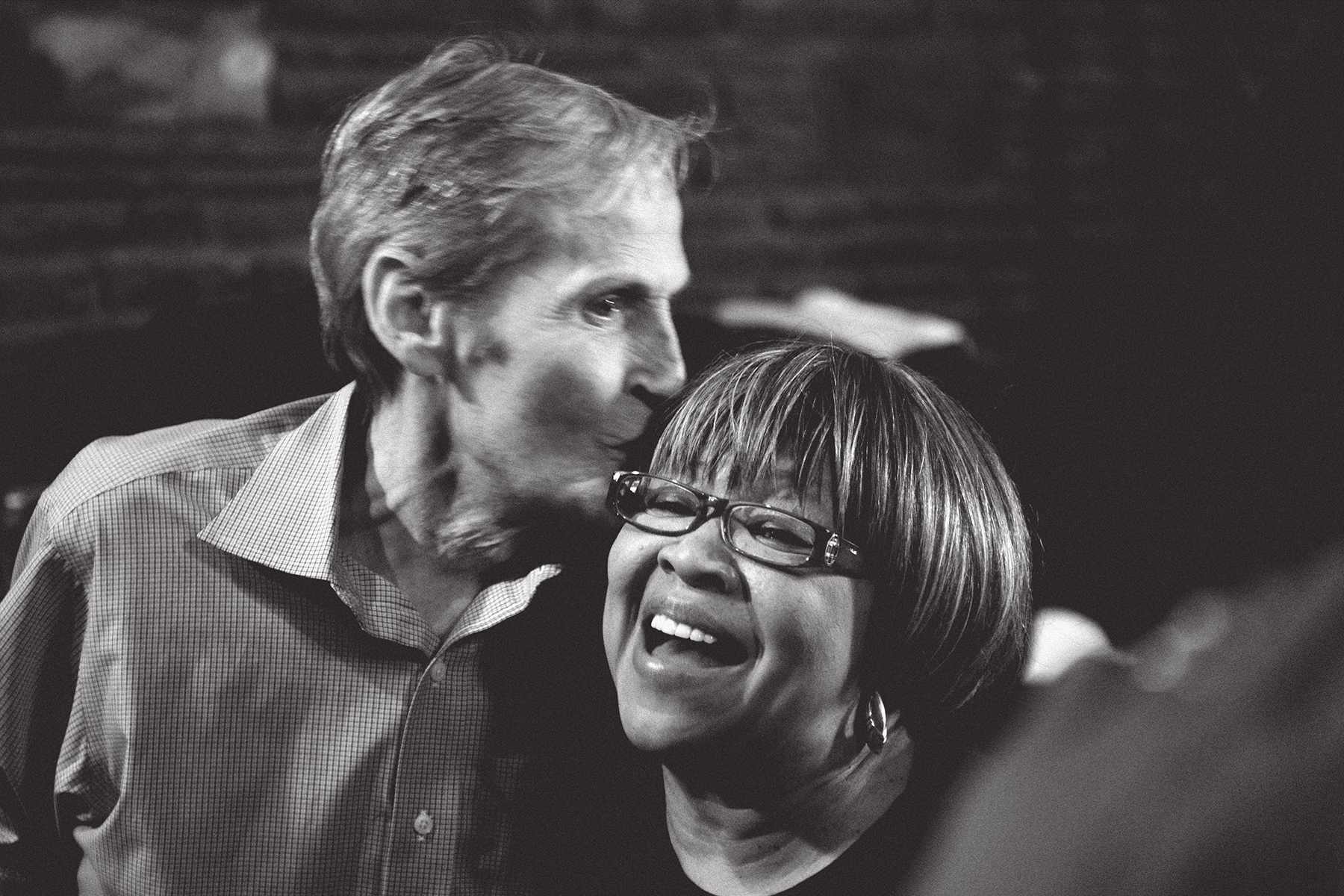 When Mavis Staples thinks about her late friend Levon Helm, memories of her family flood into her mind. Decades ago, when Helm and Mavis’ sister Yvonne were regularly talking on the phone about a possible joint tour of Black colleges, Mavis would feel left out. “I’d butt in and say, ‘Give me that phone — I want to speak to him!’” the 82-year-old singer recalls.

When Helm would see the Staple Singers on the road, he’d greet Mavis’ father Pops Staples with the familiarity of a childhood friend. “Levon is the only person that would ever call my father Pops by his real name. He’d always say, ‘Hey, Roebuck! Come show me this!’” says Staples, launching into a spot-on impersonation of Helm’s Arkansas drawl. “It sounded so good to hear him call my daddy’s name, and my father was so tickled.”

But these days, Staples’ strongest memory of her dear friend Levon Helm is from the last time the two ever performed together. Back in June of 2011, Mavis Staples and her band arrived at Helm’s Woodstock home for a very special edition of Helm’s regular Midnight Ramble concerts, the series of shows Helm began holding at his barn-turned-performance-space in 2004. The two friends spent five or so days together, goofing around, rehashing old memories, and putting together the freewheeling set list for their Saturday night concert.

Eleven years later, and almost a decade after Helm’s death in 2012, that show is finally being released as a live album, Carry Me Home — out May 20 — which marks the last-ever recording of a full set from the two musical legends.

“This was his dream, to have Mavis come to the barn,” says the drummer’s daughter, Amy. “It was her and Ralph Stanley. He said, ‘If I could just have those two perform …’ then his vision of [the Midnight Ramble] was complete. He’d been dreaming and envisioning her singing in that room since the day he started building it.”

From the moment Staples arrived, the weekend felt like a family reunion. She still remembers greeting Helm on his porch in the middle of a rainstorm and the two old friends breaking into the spiritual “Didn’t It Rain.”

“I’ve never been so happy to see someone,” says Staples, who bursts into laughter when remembering Helm messing around on his grandson’s miniature drum kit at one point that weekend. During their time together, she says, “Levon was so happy. He was smiling every day and so healthy and he would walk in each morning with a fresh, beautiful shirt on, sticking his chest out. I said, ‘Levon, you look so good.’ He would say, ‘Oh, Mavis, thank you.’”

Carry Me Home strays from both Staples and Helm’s typical set lists of the time, comprising a number of old standards, covers, and originals that the two spontaneously worked up that weekend. Staples sings lead vocals throughout, covering the Impressions’ “This Is My Country,” which the Staple Singers had attempted to record decades earlier; Pops Staples’ “Move Along Train,” which Helm had covered two years earlier, on 2009’s Electric Dirt; the gospel standard “Farther Along”; Nina Simone’s “I Wish I Knew How It Would Feel to Be Free,” a song Staples had never sung before; and, of course, “The Weight,” a song Staples and Helm immortalized in Martin Scorsese’s The Last Waltz — and during which Helm, 35 years after the film and barely singing at that point in his life, contributes a verse.

Thinking back on the performance now, Amy Helm realizes that it marked not only the last time her father ever performed with Staples, but really one of the last-ever documents of her father taking the stage while he was still feeling healthy and vital.

“He was really feeling good and strong and I remember he started to get sick again by the end of August,” says Helm, who, like Staples, carries on her family’s musical legacy in her solo career. “That summer, and this gig, was a really special, healthy, beautiful time, with lots of laughter. It’s perfect for [one of his] last musical experiences like that to have been with her.”

Mavis Staples can still remember the first time she heard Levon Helm’s voice. It was 1968, and Pops Staples had brought the Staple Singers a recent recording by some “noisy” rock band that he nevertheless thought would be perfect for the family: It was called “The Weight.”

“Pops liked the fact that they sang, ‘I pulled into Nazareth,’ because Nazareth is a city in the Bible,” Staples remembers.

Eight years later, the Staple Singers were singing the song with the Band in a sound stage in Culver City for what would end up becoming one of the show-stealing performances in The Last Waltz, with Mavis famously belting the “Carmen and the devil” verse, forever linking the two groups’ musical legacies. (Staples says she still listens to The Last Waltz often.)

Mavis and Levon stayed close in the ensuing decades, running into each other on the road and staying in touch on the phone. When they reunited to record a rendition of “Hound Dog” — later released on a 1997 record by guitarist Paul Burlison — Mavis met Amy Helm for the first time, proclaiming her a goddaughter.

“I said, ‘Levon, you want me to sing this song? You know I’m a gospel singer,’” Staples remembers of the “Hound Dog” session. “He said, ‘Mavis, anything you sing, there’s gospel in it.’”

This spring and summer, Amy will be strengthening her bond as Mavis’ goddaughter on the road, touring with her in the U.S. and Europe — including a pair of New York shows on May 20 and 21 — before Staples spends the remainder of the year gigging alongside Bonnie Raitt. After spending close to two years stuck in her apartment in Chicago, Staples is finding great joy in being back on the road. Invigorated by her forthcoming record, the singer has even incorporated a few of the highlights from Carry Me Home into her recent sets: “This is My Country” and the gospel standard “Handwriting on the Wall,” recorded by the Staple Singers in 1978.

“I just go crazy,” Staples, says of being back onstage after two years, where she’s ad-libbing more than ever. “I’m just so happy to be singing and working again and having the audience there. I’m having the time of my life, yes. Sometimes, I go over what I’m supposed to say on a song, and my band members have to say, ‘Mavis, where did you get that?’ I said, ‘It just came to me!’ So, I’m making stuff up onstage these days because I don’t want to stop.”

But being back onstage has also been a difficult reminder of Staples’ recent losses. Last May, her older brother Pervis Staples died, making Mavis the last surviving member of her nuclear family. Less than a year later, this past February, her longtime bandmate Donny Gerrard died at the age of 75.

“My heart is heavy from losing Donny and my brother, my only brother,” she says, her voice choking up. “There’s scripture that says, ‘He’s only going to put on you as much as you can bear,’ and I have asked the Lord, ‘How much more can I bear?’ But now, I’m getting stronger, because I pray a lot, and my entire family is gone. I’m just the only one here. But I’m grateful that I have so many friends, and I know people care about me. I can turn to anyone if I need help with something. But I still get lonely. With some of these shows, I’ll want to call my sister Yvonne and tell her how show was, and I just have to keep it to myself.”

And 10 years after Helm’s death, Mavis has been using Carry Me Home as an occasion to pay tribute, once more, to another dearly departed loved one. “To hear the music, those guitars, and, aw, Levon’s drums was such a good feeling,” she says.

Staples remembers how, in later years, after Helm’s health declined, whenever she would be performing in the New York area, he would send Amy to the show with flowers for her. (“It would be sacrilege to show up to see Mavis Staples without a bouquet of roses,” as Amy Helm puts it.)

“I miss him so much,” says Staples, “because I don’t get any flowers like that anymore.”