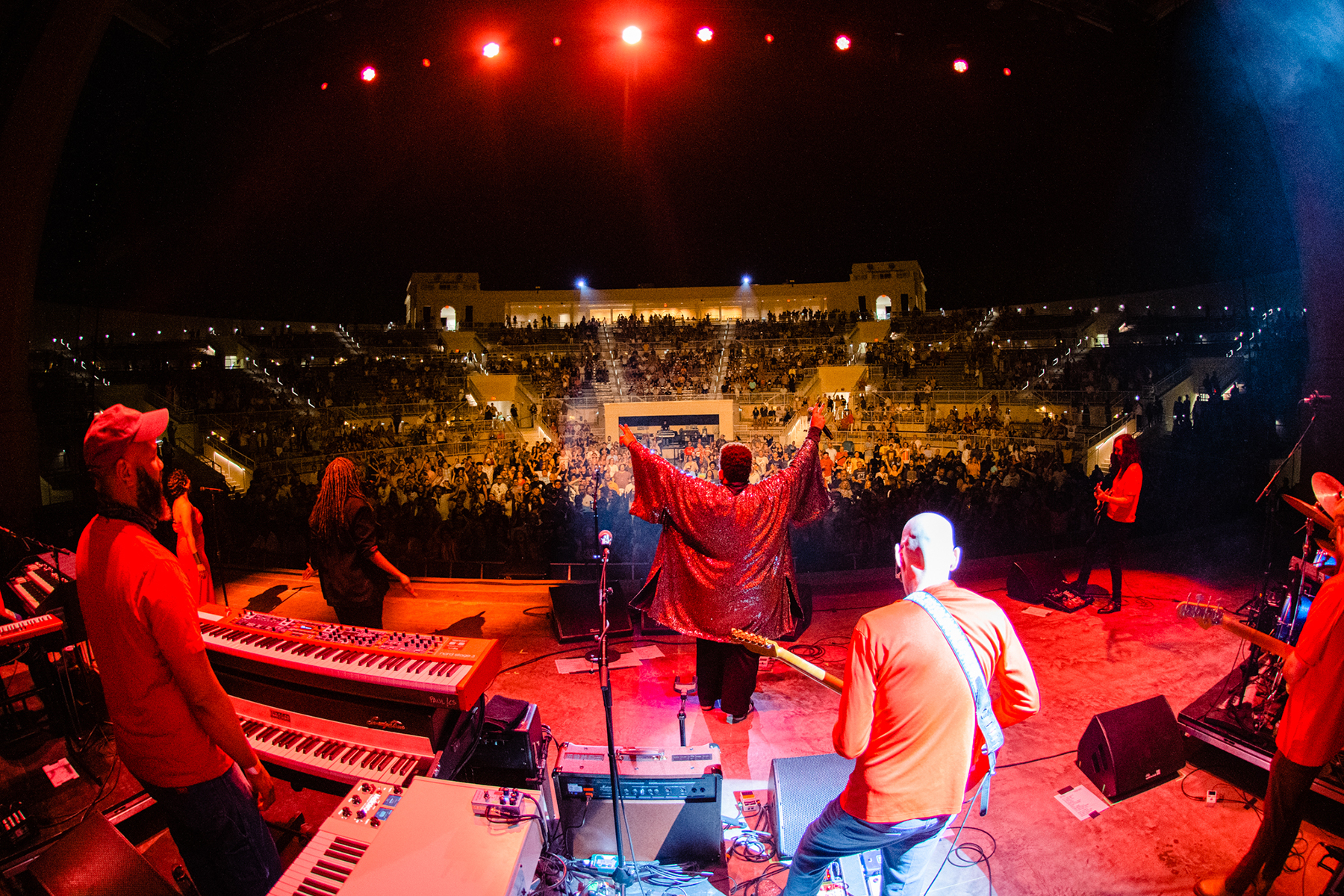 A world-class outdoor venue inspired by ancient Roman designs is probably the last thing you’d expect to find in Huntsville, Alabama, but the city’s new Orion Amphitheater is all about exceeding expectations. Which actually makes perfect sense for a town that’s primarily known for sending rockets into outer space.

Funded by the city’s capital plan and a percentage of future hotel taxes, the $40 million, 8000-capacity Orion is a perfect complement to the fast-growing north Alabama city. It was also created with the idea of community in mind, something that Mumford & Sons co-founder/keyboardist Ben Lovett — CEO of the Venue Group, which operates the Orion — is making a core mission of all his company’s venues. During Orion’s design and planning phase, he stressed how important it was to build something that would operate differently than the majority of amphitheaters in this country.

“There are lots of venues across the U.S. that play 10, 15 shows a year and we’ve seen them a million times: the concrete pad with the lawn and the roof structure over the stage and that’s about as far as it goes,” Lovett says. “And they open when they open and the rest of the year they’re not in use. I was like, ‘Forget those rules. Let’s look at how the best do it.’”

That idea of making it a unique place extended to Orion’s opening weekend in May, dubbed “The First Waltz” in a nod to the Band’s classic concert film. There were performers like Jason Isbell, Drive-By Truckers, and Waxahatchee who were born and raised in Alabama, and others like Mavis Staples, who recorded some of her most indelible work just down the road in Muscle Shoals. The closing Sunday of “The First Waltz” was dedicated to local talent like rapper Translee and the Aeolian Singers from HBCU Oakwood University.

“Once I got it locked in, I was like, ‘Man, this is what I wanted to show the people of Huntsville what we’re trying to achieve,’” says Ryan Murphy, GM of Orion and Huntsville Venue Group (a division of Lovett’s TVG). “It’s very specific to the area and it really reflects the legacy and the future of the area.”

Drive-By Truckers, who closed out the Saturday night of “The First Waltz” with their scorching brand of Southern rock, famously sang about getting pulled over on the way home from a concert in Huntsville in their song “Let There Be Rock.” The band’s Patterson Hood was excited to perform at the Orion, given the Truckers’ long history in northern Alabama.

“In my teenaged years, I attended many concerts in Huntsville, Alabama, at the old Von Braun Civic Center — Blue Oyster Cult, Eric Clapton, Eagles, Prince opening for Rick James, Billy Squire and more Kansas concerts than I can count,” Hood says. “It was great being on stage at the beautiful new Orion Amphitheater.”

The Orion and Huntsville Venue Group also fit into a bigger picture envisioned by a 2018 Sound Diplomacy audit, which centered on the idea of creating an entire musical ecosystem in Huntsville to keep pace with its growth. The engineering town was named the “best place to live” in the United States in 2022 by US News & World Report, and is steadily recruiting young talent. The music scene has to grow along with it.

“You have a really cool underground punk scene and DIY garage scene and people doing house shows, some singer-songwriter stuff and the city [is] really helping lean into that by doing different festivals and events like Women in Music festival,” Murphy says.

The city’s Von Braun Center, home to Propst Arena, also expanded its venue offerings with the 1500-capacity Mars Music Hall. And the Venue Group has plans to open a smaller club near downtown Huntsville, rounding out an ecosystem that includes celebrated music stores like Vertical House and instrument shops like Tangled String Studios at Lowe Mill.

At the Orion, meanwhile, events keep stacking up: there’s a Shakespeare performance on tap for September and a “country jam” hosted by the Roots in October, along with tour stops by My Morning Jacket, Luke Bryan, and Stevie Nicks.

Elevating the music scene in and around Huntsville is a long process that requires a lot of cooperation from multiple parties, but Murphy and Lovett note how eager everyone has been to collaborate.

“[In] Huntsville there’s something magical about how they get things done,” Lovett says. “It probably feels a little bit on the nose, but the rocket program and everything they’ve done with NASA, that gives them the self-confidence to do things that other people don’t do.”