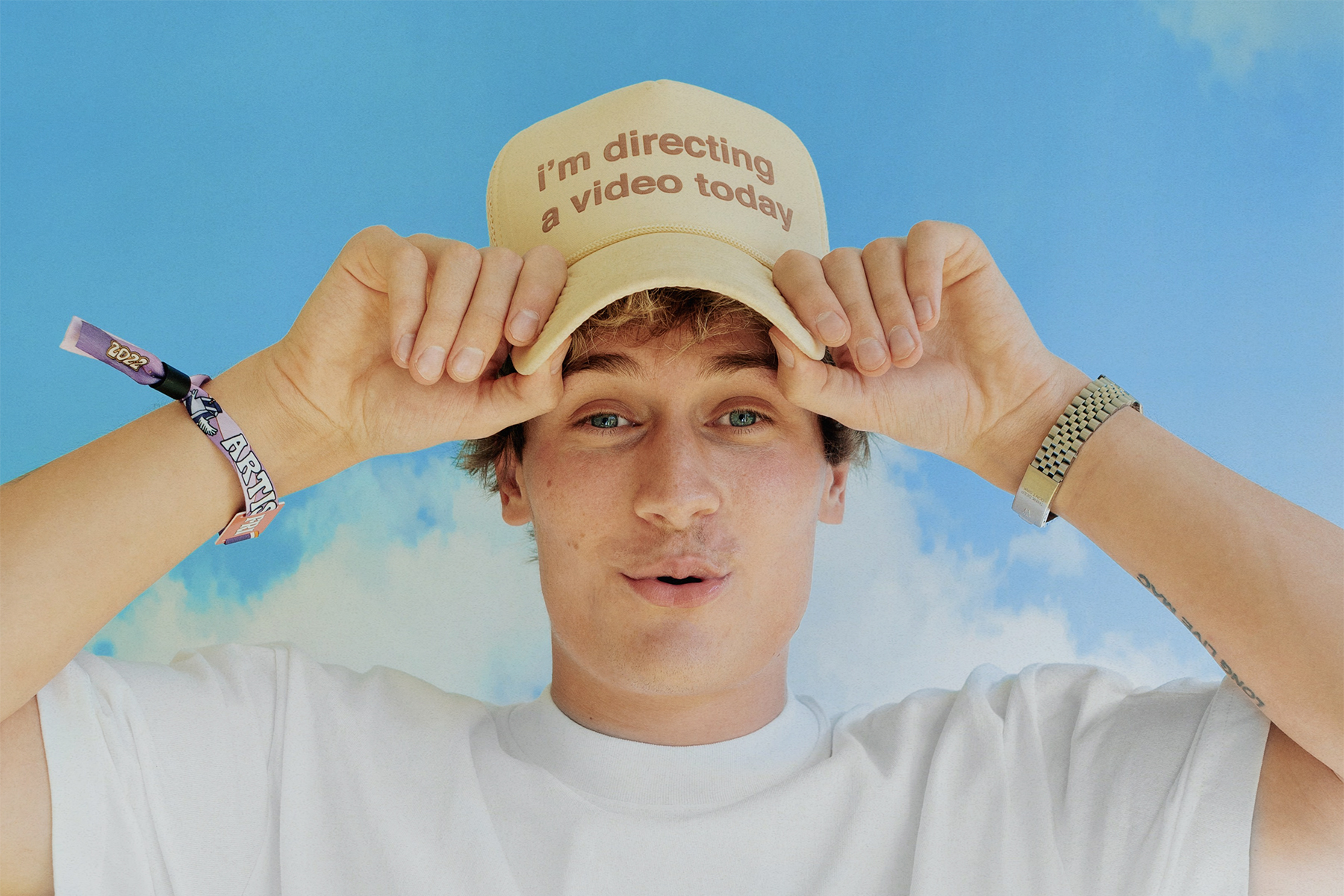 Cole Bennett spent the first half of this year living out some of his biggest dreams: meeting and hanging out with one of his heroes, Love f.k.a. Diddy, shooting a new video with Kid Cudi, Denzel Curry, and JID, and drawing more than 90,000 people to Chicago’s West Side for the 2022 Lyrical Lemonade Summer Smash, a festival he co-founded. Now, on the heels of the Illumination film Minions: The Rise of Gru, the 26-year-old can add another accomplishment to his list: helping to create a viral hit.

Two years ago, Illumination reached out to Bennett to handle the trailer and exclusive merchandise for the film, initially set to be released on July 4, 2021. But the pandemic caused The Rise of Gru to be pushed back a full year, despite already being finished. Leading up to its release earlier this month, Bennett decided to take a risk.

Initially, he had several other artists in mind to create a theme for the trailer — ones more in line with the “PG” rating of Minions, the prequel and fifth installment of the Despicable Me franchise. But during a Zoom meeting with Illumination, Bennett came up with the idea to include Portland, Oregon-bred rapper Yeat, who was already on fire with his hypercharging viral hit “Sorry Bout That.” The gamble paid off, resulting in the TikTok-spawning viral video “Rich Minion,” produced by Bennett’s longtime friend and Chicago producer Lotto f.k.a. Mulatto Beats.

“We had [a] person ready to go and [Illumination] were about to lock it in,” Bennett says of the process. “And [Illumination and I] are on a Zoom call, and I was like, ‘Guys, wait! I got an idea and it’s bizarre. There’s this artist, his name is Yeat, and all of his catalog, up until this point, is about things that don’t really match your narrative, like drugs, money, things like that. I think he’s the perfect fit for this.’ They looked at me like, ‘After what you just prefaced that with, I don’t think we can do something like that.’ But I [said], ‘I’m gonna send you guys some of his stuff. I really believe in him, and I think that there is a crossover here. How unexpected it is and how it can break barriers is very big.’”

“Rich Minion” epitomizes the greed and power-lust Gru himself displays throughout Despicable Me while still fitting the carefree, fun-loving, yet borderline-maniacal nature of the adorable Minions. For Bennett, being a part of such a groundbreaking franchise is a major step toward his ultimate goal of making full-fledged movies. I caught up with Bennett while he was taking a break from shooting a new music video and traveling across Europe, to touch on all of this, and on some challenges he’s faced — including the pushback from Chicago residents concerned about Lyrical Lemonade’s Summer Smash interfering with Juneteenth festivities in the area, then dealing with a storm that nearly destroyed the festival.

How did you all manage to get Yeat aboard for the trailer?
You know, [Yeat] grew up watching the Minions, he’s a good fit. So we got that approved, which is crazy. And we just started moving forward with it.

Can you break down how it went about?
We’re actually on set for the “Popping” video [from Yeat’s 2022 album, 2 Alive]. While all this is happening, I told Yeat about it and I’m just hoping that he’s down to do it. So of course, he was into it. I grabbed my friend, who I’ve been friends with for 10 years now, Lotto [f.k.a.] Mulatto Beats, who has so much Chicago history and is such an icon in so many ways. I told him, “I want you to produce this song.  I want you to start working on a Minions, Yeat-type beat.’” And he whipped it up. And it had all the local voices in there and everything. I sent it to Yeat and he loved it.

A few weeks go by and, like, I still haven’t gotten the song. Illumination people are hitting me like, “Hey, like, where’s that song at?” And I’m like, “I don’t know, I haven’t really followed up with him. But I know he’s excited about it.” We’re coming down to the deadline, so I hit Yeat. Keep in mind that he’s on tour at the time. I said, “Hey, if we don’t get the song in by tomorrow morning, we have to go a different direction.” He sends me the song an hour later. He recorded it in his hotel room. I just listened to it, and I just was like, “Oh, my gosh, like, this is it, this is perfect!” I sent it to [Illumination], they loved it, and the rest was history.

How did the merch come about?
Once the trailer was locked in, I was like, “What else can we do to get creative with this moment?” So obviously, the merchandise was a no-brainer. And they were super excited about it and worked with our in-house graphic designer, Daniel, who is from Australia and was in America for the first time ever, all of June. He got to design a lot of his graphics; it’s really cool for him to see it in real life. I just love seeing my friends win.

What does it mean for you to be a part of the Despicable Me franchise when you consider its history of working with artists like Pharrell and Tyler, the Creator?
To even think that we’re just the tiniest piece of it — it’s the craziest honor and it’s so surreal. The fact that it translated towards ticket sales is really incredible to me. The fact that the trend, meme, or whatever you want to call it was included, buying a ticket to the movie, and going and watching it made me so happy because there’s a whole ‘nother conversation attached to this.

Cole Bennett in his Minions jacket at Lyrical Lemonade.

Speaking of that, what was your reaction when you saw the social media trend of young men and teens coming to the movies to see Minions in full suits and going crazy?
That was crazy to me! I saw it happening. I think the craziest moment for me was when I was at lunch. And I’m sitting outside, and there’s a movie theater next door. I see 10 kids walking in the movie theater with suits. When you see something in real life, like an online trend or meme or whatever that’s seeming to go viral, it just feels completely different like, “Oh, this surreal thing is really happening.”

At this year’s Lyrical Lemonade Summer Smash, the wind destroyed so much of the stage and installation. How did you deal with that?
I think this was our smoothest one yet despite the craziest things happening. When I was able to just put that all to the side — the fact that some of the things aren’t as we planned them to be — and just be thankful for the fact that it was happening … once I tapped into that mode, I was so happy. I was no longer even thinking about the lows that we had been going through.

Among the many of the unprecedented challenges the festival has experienced, there were some members of the neighborhood who were concerned about it taking place on Juneteenth, that it would possibly interfere with other celebrations in the area. How did you handle that backlash?
It’s a super-valid argument. With everything I do, whenever I feel that there can be a tension of any sort with anything I’m doing, it doesn’t affect me too much because I know my truth. And I know what I’m here to do. I’m in complete understanding [about the backlash].

I just want to bring people together to have a good time. And I think through the festival, we’re able to do that. We bring [North Lawndale] a lot of money and different things that I think are actually helping move the community, and we want to do as much as we can to continue to help. And I think that we do a good job of showing our efforts there, and we’re always open to hearing different ways we could do more and just be as much of a force to move everything in a better direction.

How did you end up hanging out with Puffy recently? What was the experience like for you?
Puff, he hit me on Instagram and said, “What’s your number?”I give it to him. I had just got back from Hawaii and I was supposed to go back to Chicago the next morning, and I was in L.A. He FaceTimed me, and he’s like, “Man, I just wanted to tell you that I’m such a big fan of everything you got going on. It’s an honor to be on this phone call with you.” And he starts ringing off things from the past few years, and it felt like he was really tapped in, he wasn’t just saying that.

He says, “I just wanted to ring you off a ton of things, and if any of them gauge your interest, I’d love to do something together.” He started going through ideas and I’m ringing off ideas as well, and I’m excited. Then he’s like, “When you in L.A.?” I tell him I’m here now, but I leave to Chicago tomorrow morning. He’s like, “I don’t want to put the Puffy pressure on you, but I need to push that flight back. Come on to my house, we’ll have some dinner. I’m gonna take you to the Chappelle show [and] you’ll meet Dave and all the guys.”  I’m like, “Oh, yeah, push my flight back!”

I go to his house the next day and he was just the coolest guy. I could tell when someone’s being genuine and there wasn’t a motive; he just wanted to do stuff together. But he was very authentic when he said, “If it doesn’t work, it doesn’t work. And I completely understand.”

I didn’t end up going to the Chappelle show because I had my flight that night, but we had dinner and he was playing all sorts of old music, from old Puff to old Biggie. I posted a video on Instagram. You can’t hear what he’s saying, but it’s this video of us walking to the house and he grabbed my shoulder. And he’s like, “Man, it’s crazy as I’m looking at you, we’re the same person.” And this is what he said. He said “You’re the white Puff!” I was like, “Wow, that’s crazy!”

What has been your favorite part about working on the trailer for Minions?
The coolest part of it to me was my friend, Devin, who produced the beat. To give him that moment — you don’t even understand how good that makes me feel. To have him be a part of it, and people recognize his work and his talents and his skills, someone that I’ve been so amazed by for so long, as a friend, someone I could look up to in so many different ways, to see him have this moment was the coolest thing. This moment might be, like, the greatest version of that that I’ve ever experienced in my career, you know? So I’d say that out of all this, that’s been the absolute coolest thing to me. It’s such a beautiful feeling.