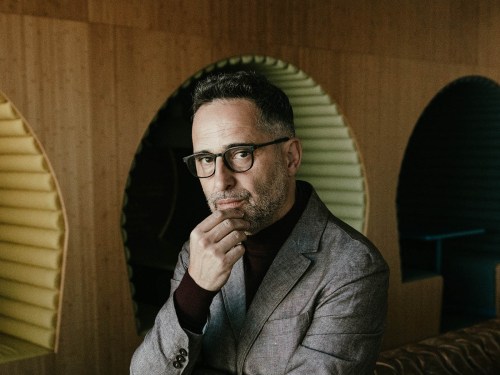 Even critically acclaimed icons have bouts of insecurity. For Uruguayan singer-songwriter Jorge Drexler, Tinta y Tiempo was an album that “almost didn’t happen.” In the past, the Oscar-winning veteran had stepped out in the world and shared bits and pieces of unfinished tunes with fellow artists — something that had been a vital part of his songwriting process. But confined to his home in Spain during the pandemic, he found himself without that nurturing feedback to support him, and many songs remained incomplete. “Two years went by, and I still couldn’t finish them,” Drexler says. “I started wondering if I had enough material for an album.”

But Drexler persevered, and finished the sessions just as the world was opening up again. In a touch of poetic justice, he ended up creating one of the most whimsical and free-spirited albums of his 30-year career. Boasting his trademark elusive melodies and wistful wordplay, Tinta y Tiempo is anchored by gorgeous orchestral arrangements and lovely guest spots, which include Panamanian salsero Rubén Blades on opening track “El Plan Maestro” and Spain’s enfant terrible C. Tangana on the sensuous “Tocarte.” While vacationing in Spain — his voice a bit hoarse after a late night singing Beatles covers at a local bar — Drexler talked about his Grammy expectations (or lack thereof) and the creative highs he has experienced on his current tour.

As a longtime fan of your work, it’s heartwarming to see you recognized for a career that spans three decades.
There’s nothing wrong with being a beautiful loser, like Leonard Cohen used to say. I was a beautiful loser for a long time — not even sure about the beautiful part. I was terrible at selling records during my first years in Spain. The first four albums I did for Virgin were a disaster as far as record sales go — and I love those albums.

And look at you now. The new album hints at a moment of creative apex. How did you get there?
When I started recording it, I had just signed with Sony. I wanted to make an album that was especially good, so that my team would feel proud and willing to defend it. Then the pandemic happened, and the whole situation was like an explosive cocktail. But Campi [Carles Campón] — the producer — and I managed to lead the ship into a good harbor. Now, at 57, I’m exultant. I feel a physical high — the desire to run, jump, and dance. I have an amazing band made up of three women and three men. I see a younger generation of fans coming to the shows.

Tinta y Tiempo is the kind of grand, majestic album that usually does well at the Grammys, isn’t it?
I make a significant effort to avoid any expectations, and agreeing to this very interview went against that [laughs]. I ask my people to refrain from mentioning deadlines or dates related to awards. I was on the road when I found out about my Oscar nomination [in 2005, for “Al Otro Lado Del Río,” from The Motorcycle Diaries], and initially thought it was a joke. At the last Latin Grammys — we had five nominations and won three of them — I was in Panama and only found out at breakfast, when I saw everyone on my team celebrating. My job is to remain disconnected from all of that, because expectations have only two possible outcomes — and they’re both bad.

Which outcomes would those be?
The first and obvious outcome: Your expectations are not fulfilled and you feel frustrated. Maybe you were already making plans, or your team was thinking about a possible win. But what people don’t know — and I believe this is the biggest lesson you can learn from winning an award — is the huge void that you feel when your expectations are fulfilled. It’s difficult to explain, but the void quickly turns into anxiety, and it throws me entirely off balance. I’ve had the amazing fortune of winning many awards. I can’t really understand why an artist who makes the kind of music that I make has won seven Latin Grammys. I’m not being modest. I just don’t think I belong to that circuit.

When we won Best Record and Best Song for “Telefonía” [at the Latin Grammys in 2018], it was the only nominated track that didn’t have a music video to go with it. When they presented the nominees onscreen, there was a still photo for my song; the other tracks had clips with helicopter shots. We just had a lyric video.

Your voice has an incredible sense of presence — it almost feels like you’re sitting nearby with your guitar. But you don’t have a big voice. Did you ever feel insecure about that?
I never felt confident. To this day, I have a hard time listening to my own voice in a context that’s out of my control, like doing a guest spot on a friend’s record. I always get the feeling that I’m ruining the song, except for the rare magical moment when I sense that I’m contributing something of value. And yet, on the two songs that I recorded together with C. Tangana — “Nominao,” for his album El Madrileño, and “Tocarte,” on mine — he told me that he loves my way of singing. He is as much a fan of me as a singer as I am of him in general. I have a small voice — I come from the João Gilberto and Chet Baker school of singing. We exist in this world only because microphones were invented. I’m terrible at singing at parties, because no one can hear me. C. Tangana realized this and made me sing in a very still and precise manner, which is a bossa nova way of singing. I consider myself more of a guitarist or a composer than a vocalist. For a long time, I wasn’t really sure if I was supposed to sing my own songs.

Those two songs with C. Tangana are surprising at first, and yet they make perfect sense. Something that feels important to me is the fact that I haven’t surrendered to nostalgia. At my age, I could dedicate myself to a revision of my so-called glorious past. Instead, I’ve continued to investigate and work with younger musicians. I’ve experimented with new orchestral combinations and metrics that are unusual for me on my collaborations with C. Tangana and Noga Erez. It’s a new way of writing songs, and it fills me with joy. This is a very vital moment for me.