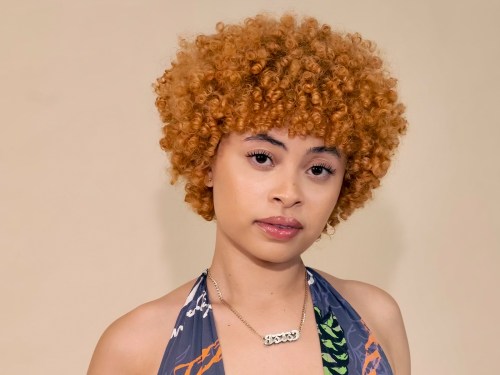 Ice Spice hasn’t seen much of Atlanta yet when we speak on the phone in September, but she’s already formed the kind of assessment you’d expect from a tried-and-true New Yorker. “It kind of looks like Jersey a little,” she says.

The 22-year-old rapper is in town for the first time to attend the BET Hip Hop Awards, the latest in a whirlwind of performances and appearances since her earworm of a breakthrough track, “Munch (Feelin’ U),” took over the internet this summer. The song infuses the melodies of the already dominant New York drill sound with a certain, well, spice. “‘Munch’ is bringing out the fun in drill,” she says. “It was a little serious before, a little violent sometimes, which is cool. I be bumping that rah-rah shit all day. But ‘Munch’ definitely brought out the zesty side of it. I want everybody to feel like a baddie.”

Born Isis Gatson in the Bronx, Ice Spice credits the borough for her approach to music. “It was a little chaotic sometimes, but it was mostly fun,” she says. “I became very self aware growing up in New York.” Her dad was a local rapper, and she remembers her mom always singing. “I just feel like I was born with a music bug, low-key.”

Produced by RiotUSA, whom Ice Spice met while attending SUNY Purchase, “Munch” came about almost on a whim. “I was recording in my room and I was like, ‘Let me make a song fast. As fast as possible,’” she recalls. “I was like, ‘How can I describe a desperate man that wants to eat it all the time?’ And I was just like, munch. He’s a munch.”

“You thought I was feeling you?” Ice Spice inquires with a devious touch of faux pity on the song’s hook. “That n—a a munch/N—a a eater, he ate it for lunch.” The song quickly blew up thanks in part to TikTok, where a snippet of the music video took the platform by storm in August. At first, detractors were quick to attribute the song’s rise to that video, in which a great deal of screentime is devoted to the contours of Ice Spice’s body. But it wouldn’t take long for those critics to find themselves memorizing the lyrics, too.

“A lot of people switched up on the song,” Ice Spice says. “At first they were like, ‘This is trash, whatever.’ And then the next day they’re like, ‘I can’t stop thinking about it.’” You could see it happen in real time in videos and memes, as the people, mostly men, who tried to use Spice’s sexuality against her revealed themselves to be munches. “Because a munch is also being a hater,” she adds. “It’s not just being a eater. They need to just get some money and worry about them.”

The same change in opinion has since occurred with one of her earlier tracks, last year’s “No Clarity.” On the song, Ice Spice cooly unpacks heartache over a sample of Zedd’s pop-EDM classic “Clarity.” One verse in particular eventually went viral. “And it’s not OK when you try to hurt me / When we fucking off perky,” Ice Spice raps. “We both from the Bronx/So I know that you dirty.” As if to prove that her detractors are indeed just uncomfortable with a woman rapping, some inventive TikTok user applied a vocal filter over the verse to make it sound like Jay-Z. The results are certainly compelling. “You know what’s so crazy? [‘No Clarity’]’s going up in views now,” Ice Spice says. “It’s going viral on TikTok. So I’m glad. There’s a little trend going around.”

In her music, Ice Spice retains the fundamental bravado inherent to drill, but like a growing crop of artists in the scene, she’s comfortable exploring a wider range of emotional palettes. You can hear it in her unhurried delivery. There’s a subtle confidence in the way she lets her flow unfurl, content to just rock with the beat. “Basically just a little more freestyle,” she says of her process. “I try to be just as clear as possible. I do feel like I’m bringing something new. It’s just fun.”

Even the perennial tough critic Joe Budden couldn’t resist “Munch.” In a clip from his podcast that spread across social media, he does a pitch-perfect baddie impression, rapping along to the song in delight while his co-hosts appear shocked. “That shit was so funny,” Ice Spice says. “I was actually laughing. I’m shocked that he fucks with it, cause I feel like he’s a hard person to please.”

“Munch” is something of a case study in drill’s potential as a sonic backdrop for both hip-hop and pop music. With a patient, rolling cadence, Ice Spice floats over the track’s oozing staccato percussion, creating something with the potential to cross into the mainstream.  She’s already got everyone from sorority girls in California to teens in the Bronx singing and dancing along online. Even Drake is a fan. (In an exchange she shared on Instagram with his permission, he messaged her to compliment her music and invite her to his OVO festival.)

For now, Ice Spice says she has big plans for the future; she’d like to drop a full project before the end of the year. And her success has left her feeling generous enough to offer a reprieve for the subjects of her hit song. “For the eaters, they should focus on themselves,” she says. “But continue to eat, because we need them.”