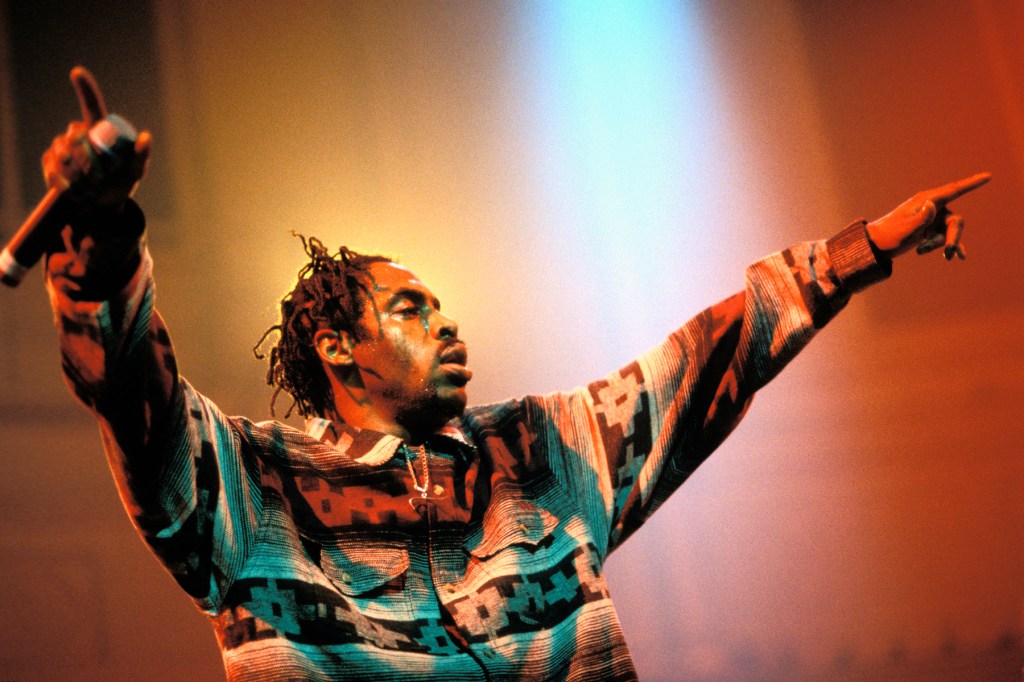 Goodbye to the late great Coolio, one of the Nineties’ top hitmakers, and one of the best-loved voices in West Coast hip-hop or anywhere in Nineties music. The Compton-born MC died way too young on Wednesday night, at the age of 59. Coolio blew up in the summer of 1994 with his epochal hit “Fantastic Voyage,” a total game-changer, making him an icon for his deadpan humor, wild braids, and playful beats. It was a blast of West Coast G-funk, but it was a dance-floor call to the party people, who weren’t getting much radio love in the doom and gloom of 1994. Coolio invited everyone to slide-slide-slippity-slide away to a more positive state of mind. Hits like “Fantastic Voyage” and “1, 2, 3, 4 (Sumpin’ New)” made a lot of the negative creeps on the radio sound like they were faking it.

“Fantastic Voyage” stood out from anything else in pop music, which was heading for a downward spiral, from the rap stations to the rock stations. (The song dropped just a few weeks before Kurt Cobain’s death.) Coolio took off from the original “Fantastic Voyage,” a hedonistic 1980 dance-floor classic by the Midwest R&B band Lakeside. It was the breakthrough hit from his excellent debut album It Takes a Thief. Like Coolio said, “You can’t have the hop if you don’t have the hip.” “It Takes a Thief was the one that made the hood like me,” he told Rolling Stone in 2017. “‘Gangsta’s Paradise’—that was the one that made white people like me.”

Coolio’s slippity-slide aesthetic was a breath of fresh air at the time, but it holds up incredibly well. His unique niche in Nineties pop culture is summed up perfectly by Clueless, the 1995 teen classic where Alicia Silverstone, Stacey Dash, and their girl crew party up to his song “Rollin’ with My Homies.” In one of the movie’s most iconic scenes, the misfit skater girl Brittany Murphy mourns a break-up and cries over “Rollin’ With My Homies,” because it was their song.

Coolio never stopped hustling, never stopped grinding. In recent years, he stretched out with projects like his family reality show Coolio’s Rules and his web series Cookin’ with Coolio, which was also the title of his cookbook, full of recipes for his “Ghetto Gourmet” cuisine. The self-proclaimed “King of the Kitchen Pimps” introduced recipes like “Bro-Ghetti” and “Chicken Lettuce Blunts.” As he told me in 2017, “I can cook, man. I think that’s the one thing I can do as good as I can rap—I cook just as good.”

His most famous hit was “Gangsta’s Paradise” in 1995, where he rapped about the ghetto struggle over the track from Stevie Wonder’s “Pastime Paradise,” a song released 46 years to the day before Coolio’s death. It came from the soundtrack of the Michelle Pfeiffer movie Dangerous Minds, with intense vocals from gospel singer L.V. “Gangsta’s Paradise” reached Number One on the Billboard Hot 100, and blew up into the year’s best-selling single. He wrote it when he overheard his producer playing the Wonder song. As he told Rolling Stone in 2015, “I sat down and I started writing. Hearing the bass line, the chorus line and the hook, it just opened up my mind. ‘As I walk through the valley of the shadow of death/I take a look at my life and I see there’s nothing left’ — I freestyled that; that came off the top of the dome and I wrote that down.”

He wrote the whole song on the spot. “You know, I like to believe that it was divine intervention,” he told Rolling Stone. “’Gangsta’s Paradise’ wanted to be born; it wanted to come to life, and it chose me as the vessel.” (It also turned into one of Weird Al Yankovic’s best Nineties hits, “Amish Paradise.”) Coolio took out the profanity in the original rhyme, when Stevie Wonder objected. But Wonder joined Coolio and L.V. onstage at the Billboard Music Awards, for an excellent performance of both songs with a gospel choir.

His Gangsta’s Paradise album had hits like “Too Hot,” a “Waterfalls”-like warning about safer sex (“What started off as a plan ended up in a plot”), with a disco beat from Kool & The Gang. “1, 2, 3, 4 (Sumpin’ New)” was a call to the dance floor—believe it or not, that was a more commercially risky move at the time than “Gangsta’s Paradise.” It was a tricky balancing act, but Coolio was good enough to pull it off—he could score party-hearty pop jams without sweating his rap cred. He put his keep-ya-head-up tribute to Black women (“For My Sistas”) right next to a song called “Kinda High Kinda Drunk.” He ended Gangsta’s Paradise with the one-two punch of “The Revolution” and “Get Up, Get Down.” Nobody did a better job of getting away with combining those midstates like Coolio. He could show up on kid-friendly TV shows like Sabrina the Teenage Witch, and contributed the theme song for the Nickelodeon comedy series Kenan & Kel, “Aw Here it Goes.”

Coolio kept scoring hits, like his 1997 dead-homies tribute “C U When U Get There,” rapping over a loop of Pachelbel’s Canon. And let the record show that he teamed up with country legend Kenny Rogers for their duet video “The Hustler,” a damn fine update of “The Gambler,” on an album with the most 2001 title of all time, Coolio.Com. He also dueted with Snoop Dogg on the 2006 comeback “Gangsta Walk,” from his 2006 album The Return of the Gangsta.

Coolio was always a highlight of Nineties-themed shows and festivals, where he proved he could still kill it live. I talked to him backstage at the I Love the Nineties Tour in 2017, at an arena in Bridgeport, Connecticut. As you’d expect, Coolio couldn’t have been a more fun dude to hang with. He was hard at work fixing his favorite custom-built jewel-studded microphone case. “It’s my Mic Saber,” Coolio explained. “It lights up—that looks good onstage.” This man took the details seriously. “They try to get us to use these dinky little fabric ones, but I ain’t having that shit. Snoop paid sixty grand for his.” But he didn’t just hand the job over to some roadie—he got busy repairing it with a power drill and a sledgehammer. As he told me, “Didn’t you know? I’m BlackGyver.”

Coolio had a lot to say about the rap scene, and how it’s changed over the years. But unlike many rappers from his era, he wasn’t the least bit bitter about the new-school stars. “Those were the crack days,” he said. “Now it’s the post-crack days—we’re in the meth times. The mumble-rappers now are the grown-up crack babies. So if they’re a little bit twisted and off and weird, it’s not really their fault. They do a lot of dumb shit, but they have flashes of brilliance.” Did Coolio have any advice for them? “Get that money. While you can.”

After he fixed his microphone case, he held it up proudly like Excalibur. “Mic-calibur,” he says. Coolio waved the mic around, striking poses like a rock star. His sax player Jarez said, “We call him the black Van Halen, a.k.a. the ghetto Peter Pan.”