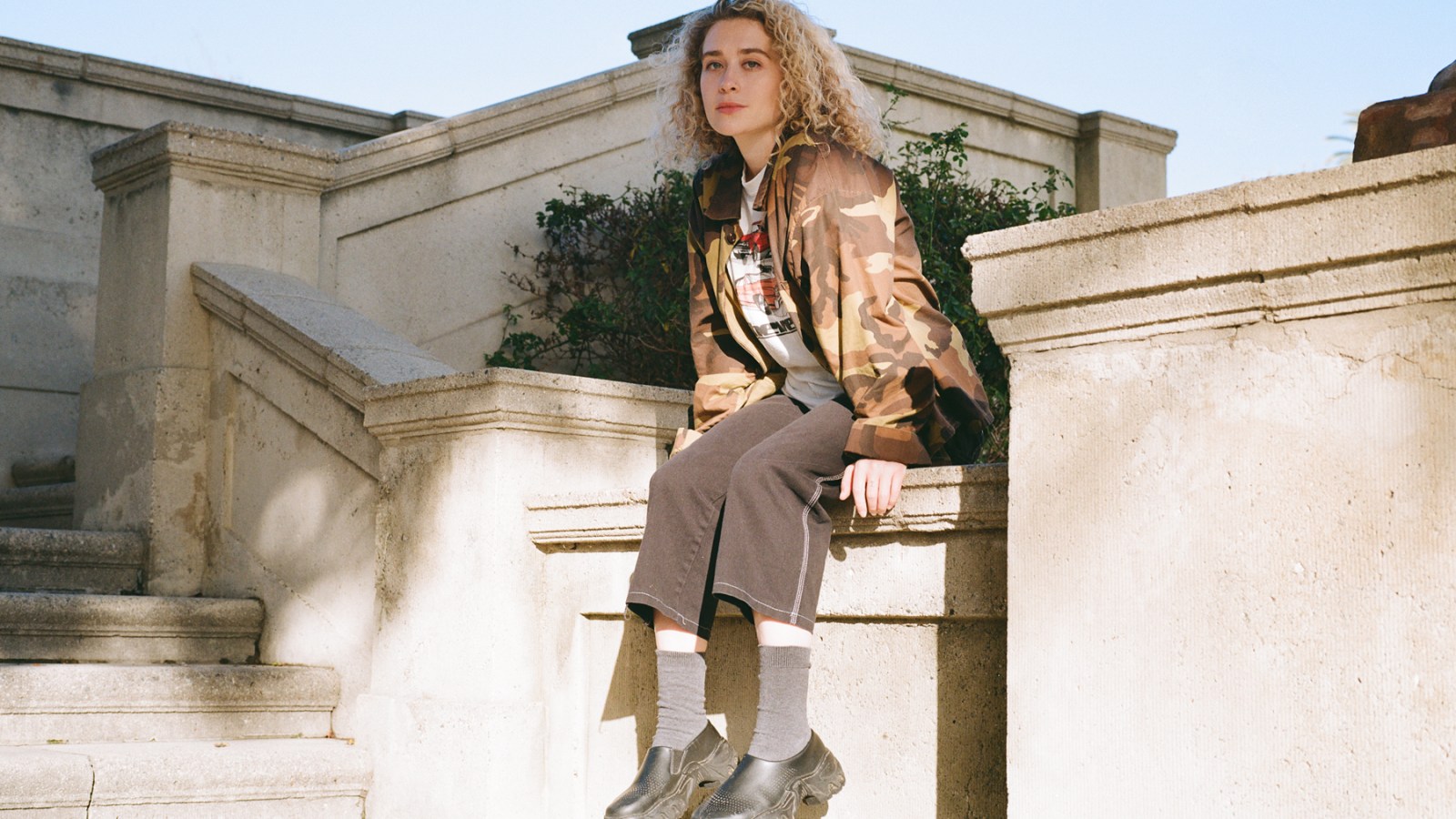 Last summer, when Sabrina Teitelbaum was about to release her new single “Kiss City,” she sent it to her sister for some reassurance. With lyrics like “Just look me in the eye when I’m about to finish,” the explosive alt-rock stunner was the most explicit song she’d ever written.

“She sent me back some text that was like, ‘Oh my god. I can’t believe you just said that about sex,’” Teitelbaum, who performs as Blondshell, recalls. “I was like, ‘But our family’s not going to hear it. Who’s going to tell them? I’ll hide my [Instagram] story.’”

Yeah, that didn’t happen. “Kiss City” turned Teitelbaum from a mostly unknown artist into a buzzed-about indie newcomer, receiving praise from Rolling Stone and The New York Times; it has more than 900 thousand streams on Spotify. “It felt cringey to have people that I know hear it, but I blocked it out,” says Teitelbaum, 25. Plus, she says, “My family was supportive about it.”

Teitelbaum is Zooming from her apartment in rainy Los Angeles, wearing a hoodie from last year’s Ain’t No Picnic festival with her curly blonde hair pulled back. She recently took her German Shepherd, Chinchilla, to the beach for the first time, but the weather has her staying home today. She cooked quinoa and potatoes for her meal before our call, explaining that she used to be a pescatarian but became fully vegan after eating some bad fish in 2020.

Today, she’s finally announcing her self-titled debut as Blondshell — out April 7 via Partisan Records — alongside the single “Joiner.” Inspired by Britpop, the track is like a darker “Coffee & TV,” containing a sunny acoustic chorus that contrasts with lyrics about scoring drugs and sleeping in bars with a gun in your bag. “Think you watched way too much HBO growing up,” she observes.

There are now five singles out from Blondshell, which make up more than half of the nine-track record. Still unreleased is “Salad,” a vicious highlight inspired by Hole’s “Doll Parts” and Nirvana’s “You Know You’re Right” that should go down as a contender for one of 2023’s most memorable songs. In it, Teitelbaum sets out to get revenge on her friend’s shitty partner, specifically by poisoning his salad. “Wouldn’t be so bad/It wouldn’t hurt the world,” she sings over surging, menacing instrumentation. “Look what you did/You’ll make a killer of a Jewish girl.”

“It feels very Jewish to have that kind of humor involved in difficult subject matter,” she says. “There was a tweet, ‘Did you have a happy childhood or are you funny?’ It’s the same sentiment.”

Teitelbaum was mostly raised by her single dad in midtown Manhattan, along with her older sister and twin brother (her dad remarried and had two more children, making her one of five). She discovered classic rock through her dad’s iPod: Dylan, Clapton, and the Stones, who were her first concert at Madison Square Garden in the mid-2000s. “I was like, ‘This is what a show is,” she says with a laugh. “It ruined smaller shows for me.” She also remembers seeing Cher in Vegas, and being so moved that she kept a piece of confetti from the show.

Growing up in the city, Teitelbaum listened to tons of local legends like Patti Smith and the Velvet Underground. But by seventh grade, she fell into Tumblr-era indie rock — Bon Iver, Grizzly Bear, and early Tame Impala — that influenced her writing. Unlike most native New Yorkers, Teitelbaum doesn’t despise the uninviting, cavernous venue Terminal 5. “I was going there with my fake ID and with my friends and getting drunk,” she says. “So it’s really sentimental for me.”

After graduating from the Dalton School, Teitelbaum decided to get serious about music, and moved to the West Coast to attend USC’s pop program in 2015. But she left after two years, feeling burnt out, and began releasing chill pop under the moniker BAUM. She released an EP called Ungodly in 2018, followed by the single “Fuckboy,” which sounds like a pop banger you might hear in a late-night Uber.

“It always felt weird to me,” Teitelbaum says of this period. “I never loved the name and I never felt fully confident in the music.” Around this time, she began working with producer Yves Rothman, known for his work with Girlpool and Yves Tumor. Knowing Teitelbaum’s taste in rock, he was confused. “I would come in with these pop songs and he was like, ‘I don’t get it,’” she recalls.

On the last day of 2019, Teitelbaum made the decision to get sober. “I take it really seriously, because drugs and alcohol were not a good thing for me,” she says. Sobriety, combined with the pandemic, led her to fully focus on the music she actually wanted to create. “It was difficult to go through that and then be in isolation right away, so I turned to music,” she says. “I had a desperation for writing. I needed to get everything out, like, ‘This is going to help me with all these feelings.’”

The main feeling Teitelbaum didn’t know she had: anger. A lot of it. “There were a bunch of songs that I listened to that had women being enraged, and I was reading a lot of books,” she says, citing Clare Sestanovich’s Objects of Desire and Rebecca Solnit’s Recollections of My Nonexistence as examples. “My whole life, I felt like I couldn’t talk about any feeling that was over a certain amount of intensity.”

Through this rage, Teitelbaum suddenly felt a shift. She began to ask herself questions, like, “Why do shitty things happen to my friends or my family?” and “Why do I have to have feelings for only people who don’t have feelings for me?” Plus, she says, “Not only am I angry about those actual things, but I’m also angry about the fact that I’ve been made to feel like I can’t talk about them.”

This became the theme for the entire Blondshell album, though, at the time, she wasn’t intending on releasing any of the songs. She wrote “Olympus” in February of 2020 and sent it to Rothman. “He was like, ‘OK, can you go home and write three more songs like this?’” she recalls. She also showed her friends songs like “Salad” and “Joiner,” and received a similar response. “You can tell if they like it or not, even if you’re a good liar,” she says. “I got to the point where I was able to be myself in my music.”

Though anger is the overall theme of Blondshell, there are other through lines in the songs, specifically how women are conditioned to believe that shitty guys are attractive. Teitelbaum expresses this in the riff-heavy “Veronica Mars,” where she reminisces watching the early-aughts TV show as a child: “Logan’s a dick/I’m learning that’s hot.” Later, on the killer “Sepsis,” we see this belief fully-formed: “I’m going back to him/I know my therapist’s pissed/We both know he’s a dick.” At the end of the record on “Tarmac,” the sister song to “Sepsis,” the theme culminates on a turbulent chorus: “I’m in love with a feeling/Not with anyone or any real thing.”

All of this emotion makes for a fantastic live show, which Teitelbaum proved when she performed at New York City’s Mercury Lounge in December. Wearing a Le Tigre shirt and surrounded by candles, she tore through every song on Blondshell, and covered the Cranberries deep cut “Disappointment.” In her hometown, with her friends in the front row holding a sign that read “You’re hot,” she’d finally found herself.