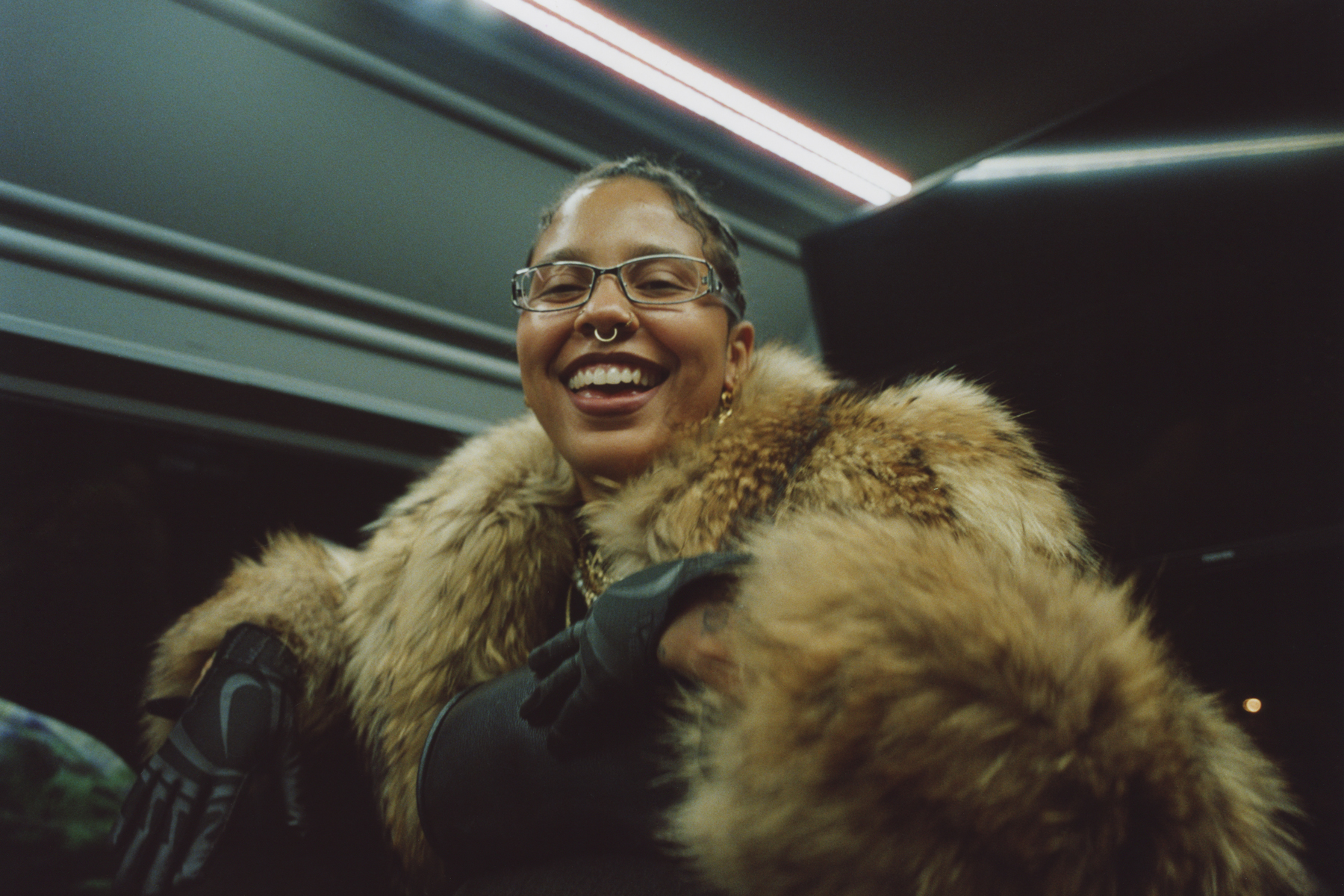 I’m knocking on the door of a spacious hotel suite in midtown Manhattan one day in March, and a teasing voice on the other side calls out in Spanish: “The person you’re looking for no longer lives here!”

A couple of giggles follow, and suddenly the door swings wide open. Standing in front of me is Tokischa Altagracia Peralta, 26, the Dominican force of nature whose explicit, rambunctious, and proudly queer songs about sex, drugs, and popola (or pussy) have made her one of the most talked-about figures in the Spanish-speaking music world. She’s the dembow ambassador whose star power has been expanding like the universe, who’s made Bad Bunny fangirl at award shows, who’s selling out venues with no album out. She’s controversial, problematic, outrageous, and completely beloved or relentlessly reviled, depending on who you ask. She’s been fined by Dominican officials, threatened with jail time and censorship, and denounced by horrified conservatives — all things that have only made her more flagrant about who she is. A few days after we meet, she’ll upload a video on Twitter that shows her having sex on the balcony of this very hotel, just for the hell of it.

Right now, however, she’s bare-faced and clad in wave-blue pajamas. Soft-spoken and approachable, she looks more like a college freshman roused for an early class than the Latin-music industry’s leading provocateur. It’s about 10 a.m., and she stretches out in a lounge chair, running a hand through her tousled hair and enjoying a few free minutes during her first U.S. tour. Tales of her shows have spread like wildfire: They’ve become liberated, raucous spaces, where people let their freakiest freak flag fly. “I’m very crude with my lyrics, and everything that I’m expressing is very, very, very real,” she tells me. “People identify with all of it.”

There are downsides to her carefree and careless approach to fame. Last year, she and J Balvin took heat after the video for their song “Perra” portrayed Black Dominicans from a local neighborhood as dogs. Balvin apologized and took the video down; Tokischa said at the time that she was “truly sorry that people felt offended,” but defended Balvin and said that “art is expression.” Worse was a since-deleted Instagram post she uploaded in April in defense of Rochy RD, a dembow artist arrested in the Dominican Republic that month on charges of sexual abuse against an underaged girl and participating in child sex trafficking. (He has maintained his innocence, and is currently awaiting trial.)

The post, which included a photo of Tokischa in a “Free Rochy RD” t-shirt and a crass caption claiming that minors will hustle and have sex for money, angered and disappointed even her die-hard fans. Many pointed out how damaging the statement was in the Dominican Republic in particular, where it underscored patterns of victim-blaming and lack of protections for women and girls. It also exposed a chasm between what people want Tokischa to represent and what her actual impulses are. (A rep for Tokischa did not immediately respond to a request for comment on the post.)

Tokischa has become an avatar for so many things — sexual freedom, queer desire, radical feminism — but if you ask her, she says she is simply articulating her own truths, which include experiences with addiction and sex work. “When I started making music, I said, ‘I’m going to be honest about what I’m living through.’ This is what art is: the sum of your experiences, what you’ve lived, your fantasies,” she says. The path left for her is a complicated one, intensified by her own history of off-the-cuff, hurtful comments, yet Tokischa’s plan is to keep bulldozing forward.

The story that defines Tokischa’s childhood, the one that spills out of her in conversations like she’s reciting her own version of Genesis, happened when her mother left her in Santo Domingo — where she was born, in the neighborhood of Los Frailes, on the city’s southern tip — to find work in New York. Tokischa was about three years old. She bounced from relative to relative; her mother would visit when she wasn’t working hard manual jobs in factories or as a care provider in the States. They remained close, but it hurt Tokischa that they couldn’t be together. “When I’d see my cousins, my neighbors, my half-sisters from my dad’s side with their moms, I’d be conscious of that,” she says.

She always knew she liked girls (she identifies as bisexual), and her first kiss was with a close friend when she was young. “My brother found us, and he hit me so hard,” she says, laughing weakly. It didn’t stop Tokischa from doing what she wanted. “I gave myself liberty,” she says. “Living with a conservative family, one of the first things they tell you — that the whole world tells you — is that you need to wait, stay a virgin until marriage.” She lost hers at 16, and the rebellions kept coming: “I’d escape from school all the time. I’d go to the edge of the ocean. I’d go out with guys. Then I’d walk quickly, quickly back home, before anyone saw,” she says.

At 18, she took a job at a call center. She did it begrudgingly, until someone told her about Craigslist, where wealthy male tourists posted ads looking for female escorts in the Dominican Republic. “Millionaire gringos: ‘I’m going on vacation, and I’m looking for a girl to share my time with,’” she recites from memory. “Through those ads is how you’d find sugar daddies. I found one, then another, then another.”

Around that time, Tokischa met Raymi Paulus, who had been toiling away in the Dominican Republic’s underground art scene with films and photography about sex and queer life. Someone introduced them at a park one day, and they instantly clicked. “She had a special energy, this way of being that was organic and this way of seeing life that was as real as mine,” Paulus says. When he found out about her interest in music and theater, he brought her to a local studio to see what would happen. He’s been her manager ever since.

Tokischa started out with hard-hitting trap-soul sounds before moving into dembow, which had been blooming across the island. Her songs were often blunt and anarchic, reflecting what she was going through. She’d started using drugs more, and she was living with an older man she describes as a millionaire. “It was a toxic relationship,” she says. “Two drug addicts who don’t like each other, who don’t love each other, who are just completing a transaction. But it was a big source of livelihood for me, so I could see my mother, so I could invest in my music.”

Still, she felt like everything was catching up with her. Getting high, feeling the adrenaline from the crowd at local shows, and experiencing the euphoria of being onstage was too much.  “Slowly, slowly, I had to come down,” she says.

She went to the countryside to detox and has been clean for two years (she started drinking alcohol in December). The process, she says, left her with a sense of clarity that she wants to channel into her debut LP. “I want to make an album that has everything that happened to me in it. Then I can close that chapter, close that era, close that madness.”

Before the chapter closes, Tokischa is trying to pack in as much as she can into it. “Linda” and “La Combi Versace”, a pair of collaborations with her close friend Rosalia, have become some of her biggest songs, and in April, she launched “Estilazo,” a vogue-meets-dembow track with Marshmello. With its house sound and its visual nods to American drag culture, it’s easy to see it as a hint of the international ambitions Tokischa is setting her eyes on next.

Once our conversation in New York ends, her day starts moving in warp speed: She gets through a photoshoot, soundcheck, and hair and make-up, then she saunters toward the mic at Terminal 5 just before midnight. She’s wearing a translucent black dress; when she turns around, she reveals that the outfit is completely backless and also assless. The crowd is already riotous, and they go berserk when they see her. They dance and scream and take endless photos, and their tiny ice-white flashes go off in blinding waves, making it hard to tell if Tokischa can make out all the mayhem from the stage. What she could see, she tells me later, was a sea of people from around the world — straight, queer, weird, nonconforming — feeling as free and uninhibited as she did in that moment.