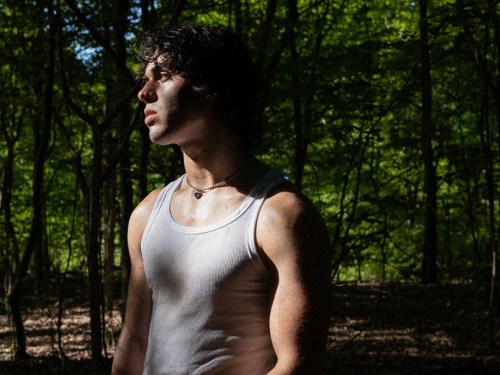 Israeli pop star Mergui is getting ready to take on the world. He won over his country almost five years ago, as an eager teenager who auditioned for the singing competition Rising Star with a take on Moana’s “How Far I’ll Go” heard by millions. After becoming a major artist there, he took a huge leap: He moved to the U.S. part-time and began working non-stop on Dark Side of the Rainbow, his first English-language EP.

“We’ve been working on it for so long,” he says after just landing in Los Angeles to continue promoting the recently released project. Mergui and a mix of American and Israeli collaborators began putting together the project three years ago, writing nearly 60 songs in total and whittling them down to just five emotional pop cuts. The final product encompasses the chaos, turmoil, tragedies and victories of this period in Mergui’s life, specifically the end of a relationship (he endured a public break-up with with fellow musician Noa Kirel in 2021). But the main journey that the EP captures, he explains, revolves around his own self-discovery.

Mergui carefully constructed the songs to detail a relationship from beginning to end. To Mergui’s fans, these last three years may have seemed like a “rainbow,” he explains of the EP’s title, but the songs expose the dark side of it as well as his most honest, open and vulnerable storytelling.

Now that the EP is out, Mergui is looking forward to live shows and maybe even getting more of the vast collection of already-written songs from the last few years out. Until then, he sat down and took Rolling Stone through the meaning behind each song on Dark Side of the Rainbow.

The reason it’s the first on the EP is because it shows the beginning of a relationship. It’s when you first get into something unintentionally. Sometimes heartbreak and falling in love are not that far from each other. You have to accept the fact that this is how it is. I have this line in the song “Skydiving, no parachute.” This is how it feels to me: you have to let down all your guard and there’s no protection.

[A relationship can] feel like a car to me. When something is broken in a car, like the wheel doesn’t work or the window’s broken, you can always fix it. But if the engine is damaged — or there’s no love anymore — there’s nothing you can do. I ended up using this metaphor in the video because it’s a solid metaphor of what I was experiencing at that time. I’m trying to pull the car even though it’s burning and upside down.

My relationship with the media was a big part of it too. I remember hearing from people how I should act when media is there, how I should present myself, how I should be. As I grew up, I realized I’ll never be myself if I’m not going to show the dark side too. If I’m not going to talk about the bad parts too. The media is people; I have to talk to them like I talk to my friends. Showing who I am is part of what I’m doing.

This song has everything in it; it’s a realization. It’s a specific moment where I finally realize where I’m not where I’m supposed to be. I started asking myself if this is the situation I would want for myself in the future, which was a very hard thing to do. It takes a lot of courage to finally doubt where you are. “Falling” means so much because you can hear all the journey in the song.

This is a post-relationship song. When we were in the studio, we tried to think about how we could put this tornado of emotions in the song. It’s like “I hate you” but then “I miss you” and all that stuff. We wanted it to feel very harsh and driven because that’s also a relief. I gotta pour it out.

This was the last one written. It’s the post relationship kind of song, the hypothetical. Because it’s like when you haven’t seen your ex in a while and and you had a thousand conversations in your head. But what are you going to tell the person when you meet with them for the first time after, right? You have to sum it up somehow.