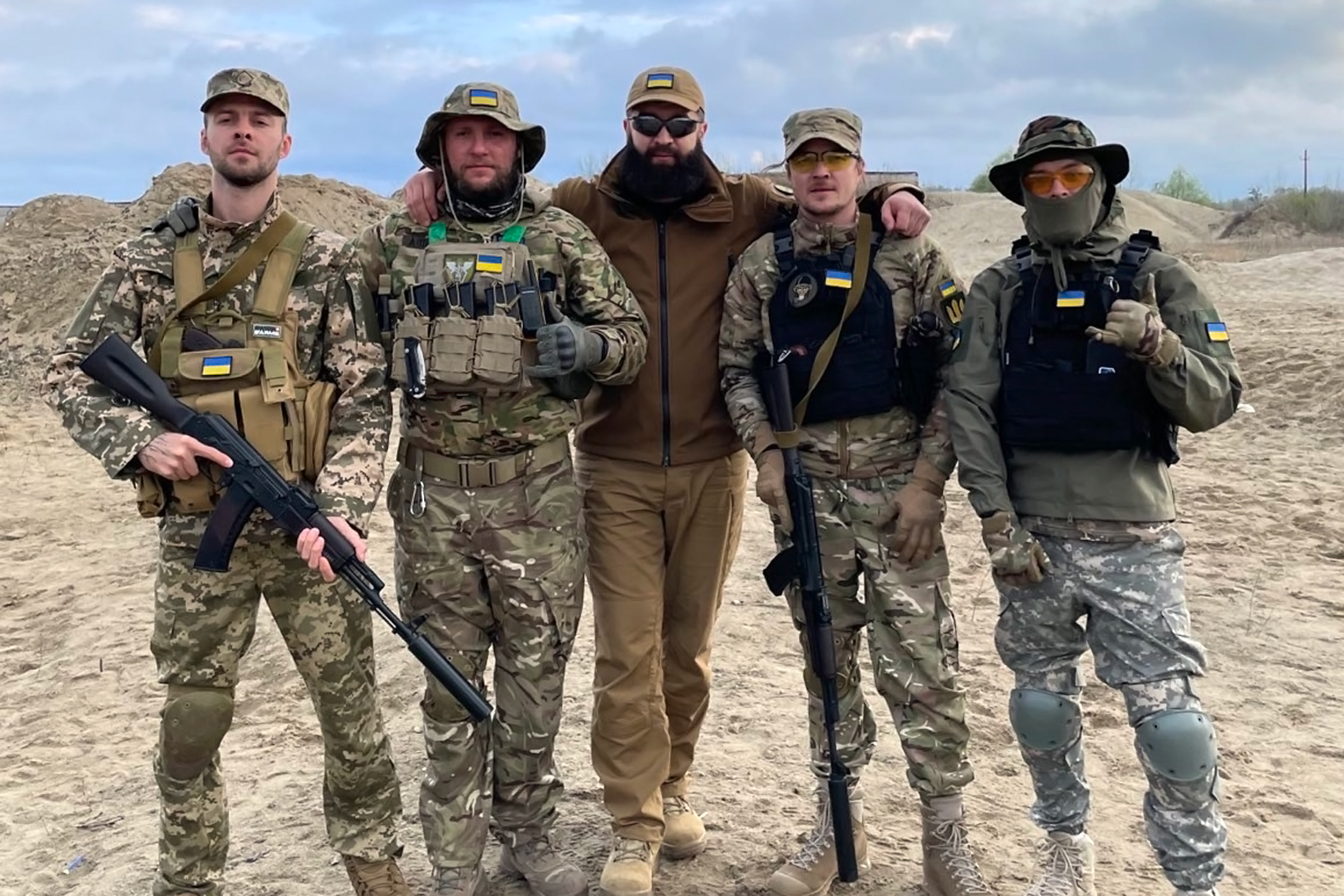 Ukrainian pop star Max Barskih’s last single, released in a more peaceful time – November 2021, to be precise – was a vaguely Ed Sheeran-esque break-up ballad called “Tequila Sunrise,” complete with a video where he danced shirtless atop a barroom table. Three months later, Russian troops invaded his country. “We were hearing bombs and attacks almost every hour or two,” he says.

Barskih canceled a planned tour of Russia, where he had a huge fanbase. After a dangerous journey to help his family get safely abroad, he returned home to Kiev, where he joined the Ukrainian army.  In his free time, he also recorded a new, and very different single, out today, with proceeds going to the Ukrainian military: It’s a whisper-rapped EDM banger called “Don’t Fuck With Ukraine,” complete with massed voices singing a line plucked from the real-life war: “Russian warship, go fuck yourself.”

Barskih won the Ukrainian equivalent of American Idol in 2008 and has released six studio albums since then, but he’s not sure when he’ll be able to return to full-time music-making. At the moment, he’s working in a communications capacity for the army, while continuing combat training.  In a Zoom conversation during a day of personal leave from the army, he spoke in detail about his dramatically altered life.

I know this all has been especially strange for you because you had so many fans in Russia. Like so many people, did you have trouble believing they would actually invade?
We live in the 21st century, and no one believed this would happen. A few days after February 24th [when the Russians invaded], I decided to talk to my Russian audience through social media and share everything that is going on. 100 percent true stuff, all through my eyes.  And I started to get lots of hateful comments, messages from once-beloved fans. And that was one of the biggest disappointments in my life, to be honest. So from that moment, from the 24th of February, Russia doesn’t exist for me anymore. We broke all our contracts with our Russian label, and I also transferred all the money that was supposed to be from the Russian tour to Ukrainian humanitarian aid. I went through all my DM messages, and it’s so funny to see. There’s messages from a year ago that are like, “I love you so much. I can’t live without your music.” And after the 24th, it’s like, “I wish you death. Death to all Ukrainians.”

How about people you knew in the Russian music industry?
I started to contact my artist friends from Russia. Some of them got on my nerves so bad, because they were supporting Putin. And they were doing crazy posts, like, “go Russia!” Some Russian artists that I respect were supporting Ukraine, but some were paid by the Russian government and were just scared coward motherfuckers.

In Ukraine, I love that we all feel like a big family right now. And this changed my perspective on being Ukrainian. Before I felt all Slovenian people were kind of similar. But I started to learn history, and Russia always wanted to invade or destroy Ukraine.

How did you end up joining the army?
I got back to Kiev and went to the commander of a military unit and asked, how can I help? So I signed up and started to study warfare. He told me there are enough soldiers at this moment, so I’m going to be a reservist, and he put me in the communication department, where I can be more helpful. So basically, I’m responsible for finding military equipment, and for fundraising and support. At the same time, as a reservist, I’m ready to go any second.

Do the other soldiers treat you differently?
I don’t feel any status of being a celebrity.  I’m just a regular Ukrainian. But the soldiers are very supportive. At first, they were taking pictures with me. And they kind of felt more powerful. They were like, okay, so we have everyone on our team, with people from the [music] industry going military now. And it’s  also very inspiring for regular Ukrainian guys.

You’d been living well for years, and now you’re sleeping communally with guys in the army. How has that change been for you?
It’s a big change, but you know what, I love it. It’s a new experience for me. And it teaches you to not forget that you’re human, first of all. And you get new friends. It’s an amazing experience to be honest. The commander told me, “It’s your choice. It’s unnecessary for you to be here one hundred percent of the time.” But it was my wish and my desire.

Has anyone asked you to sing?
[laughs] Yeah, at the beginning. Later, I’m like, guys, honestly, I don’t feel like singing. After this, I don’t know how I’m gonna go back to the stage. After what I’ve been through and all the Ukrainians have been through, it will take lots of time to get back to normal life. I can’t picture myself being on stage in, like, shiny outfits and just jumping or performing. I’m in a totally different space… I was living part-time in the States so I’ve been able to study English more and I’ve been writing English songs for a few years in a row. I’m always improving myself and getting deeper lyrics. So hopefully, since Russia is dead for me now, my journey will begin towards the European market and American market. Hopefully there is space for me as an artist.

Tell me about getting your family to safety.
I decided to gather all my family members and send them abroad. We decided to go closer to the border, and on the way we were passing all these Russian military transports and all these firefights. It was crazy. It felt like a fucking movie. I didn’t sleep for two days in a row, driving. By the third day I felt like I was high on drugs. Then I got back to Kiev. It’s sad to admit but after months of this invasion, you almost start getting used to it. It’s painful to admit, but it turns into regular days, which is horrible.

Did you expect the Ukrainian resistance to be as robust as it has been?Ukrainians would never agree to be like slaves. I believed we would resist. And if you go to TikTok we’ll see that Ukrainians take time to make fun of Russia’s fucking army and how they’re bullshitting everyone. We thought it would difficult to fight them, but then we see we keep destroying their military equipment. So I believe, and I know for a fact, that Ukraine’s gonna win. Just from seeing the results of our army and how stupid the Russian army is.

What’s it been like to learn how to use weapons?
I’m probably 70 percent in my training, and will be continuing. Of course, I don’t know if I’m ready to kill someone. Because I’m a spiritual person. But if it’s in protection of my family, my people, I will do it.

How did you manage to write and record “Don’t Fuck With Ukraine”?
I recorded it in this military unit, covering myself with a towel so the acoustics would be better. I always do my own production, but this time I couldn’t, so I just did a simple skeleton on the computer, and I sent it to my friend to finish the production. And we collected footage of our Ukrainian army and used it for the video.

It’s definitely a different lyrical direction for you.
[laughs] A year ago, I was wearing sequin jackets on the stage. Now everything is green in my wardrobe.