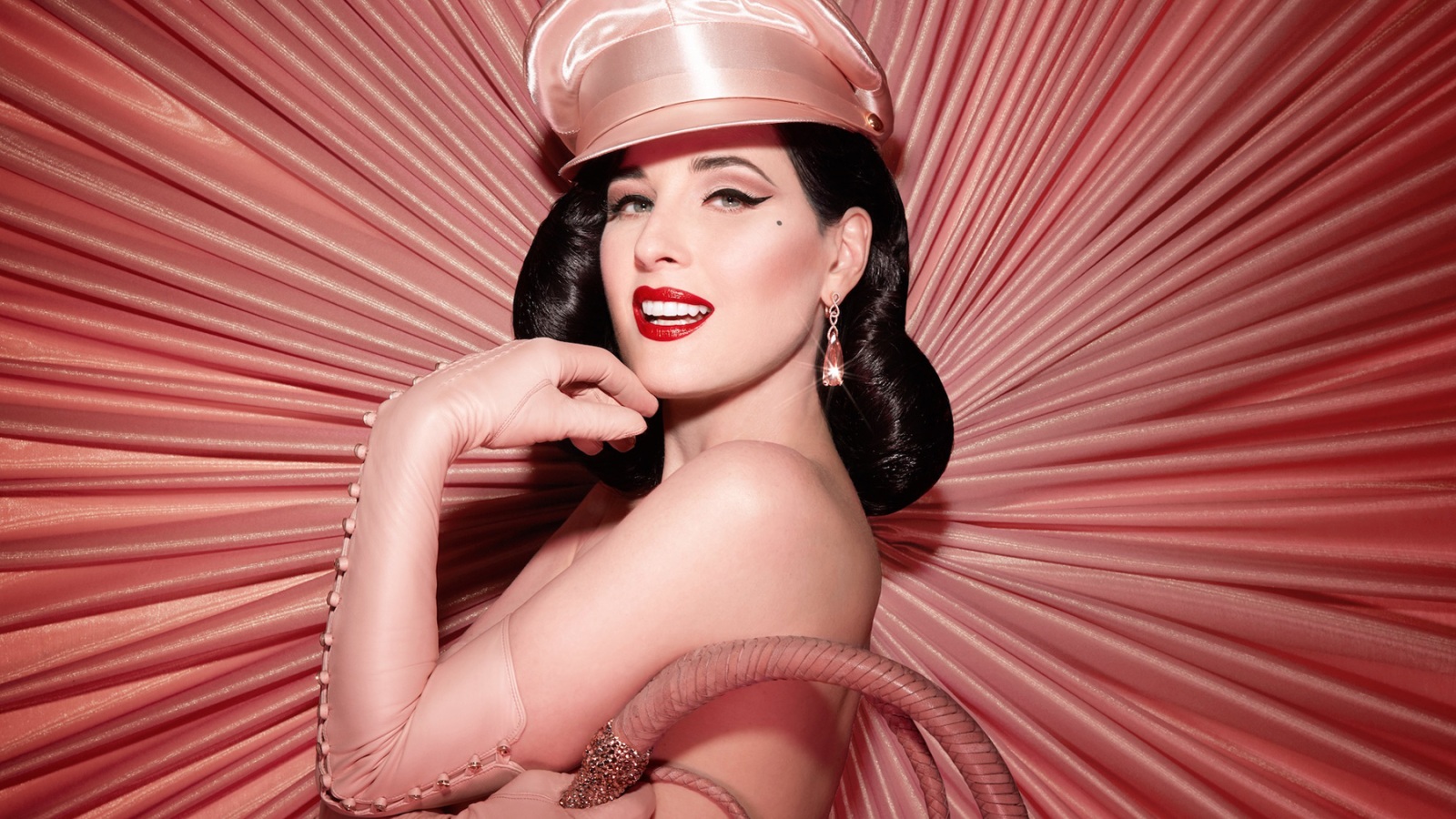 Lately, younger fans of Harry Styles and Taylor Swift have been trying to piece together the puzzle of exactly who Dita Von Teese is. The burlesque legend had a cameo in Styles’ leading man debut Don’t Worry Darling then popped up in the video for Swift’s Midnights single “Bejweled.”

Von Teese, meanwhile, has been blissfully unaware that a new generation is discovering her.

“It’s really funny when things like this happen,” she says over Zoom. “I’m not very active on TikTok even though I have one. On Instagram, Facebook, and everything, I don’t really dig too much. I’m not trying to hunt for accolades. When you start to hunt for the good stuff, you’re gonna find some bad stuff.”

Von Teese has remained a steady and successful presence in the burlesque scene. She has been crucial in helping re-popularize the performance style, often becoming the de facto face of it. In the aughts, she made appearances on shows like America’s Next Top Model and RuPaul’s Drag Race. All the while, she has built a steady touring career, including her current Glamanoatrix revue that will traverse North America from New Year’s Eve through late February.

Filming her part in Don’t Worry Darling marked her first performance since the pandemic began. The film’s costume designer Arianne Phillips is an old friend of hers and called up Von Teese about the movie.

“Next thing I know, Olivia [Wilde, the film’s director] and Arianne are at my house and we’re going through my costumes and talking through the scene,” Von Teese recalls. The scene itself is a major one in terms of the film’s plot: Von Teese is putting on a show for the mysterious Victory Project staff and families in one of her signature champagne glasses, all while Jack Chambers (Styles) is being promoted. As the party grows more wild, Jack’s wife Alice (Florence Pugh) appears to be descending into madness as she pieces together that there is something sinister afoot in Victory.

“It was intimidating to do my performance in front of all these incredible performers,” Von Teese says. Her scene at the Victory gala is one of a few where almost the entire cast of the film was present together. It was just as surreal to return to the Cicada Restaurant and Lounge, where filming happened — a space she used to perform at frequently in the Nineties.

But the energy in the scene was completely different from what Von Teese is used to. The room had to be filled with a sense of ominous machismo, which is an unusual for her.

“I have a lot of female fans that love glamour and beauty, and a big LGBTQIA following. In the scene there’s a frenzy and a lot of guys hooting and hollering like it would’ve been in the Fifties. It was a very different feeling than what it’s like doing my normal show, that kind of male gaze type thing,” she says.

Von Teese had to keep her cameo a secret for two years, but just as she was finally able to talk about Don’t Worry Darling, another highly confidential project fell into her lap. Over the summer, she got a call out of the blue from Taylor Swift’s people pitching her on a scene in the video for “Bejeweled.” The track is the second single off Swift’s tenth album Midnights and was accompanied by Swift-directed, cameo-filled visual that also features Laura Dern, Haim, Jack Antonoff, and make-up artist and entrepreneur Pat McGrath.

Swift herself also spoke with Von Teese ahead of the video. “She said, ‘I watch people be inspired by you. You’re on everybody’s mood board but nobody ever credits you or features you.’ She wanted to do that. I thought that was really nice that she said that. That’s the kind of attitude that makes me want to share my trade secrets.”

Swift’s costume designer Joseph Cassell came by Von Teese’s house on day to take a look at her collection and then made water-proof, “PG” recreations of the Catherine D’Lish originals for the shoot.

Von Teese filmed her appearance in August. In the video, she and Swift do mirror performances of the burlesque diva’s martini glass dance, in two of the glasses from Von Teese’s personal performance collection. They didn’t rehearse; Swift had been studying Von Teese’s videos and took some early tips.

“We worked it out on set in a matter of several hours. She’s a pro. I think the one thing she had the hardest time with was the stocking peel. I was able to talk her through it,” she says.

Vintage glamour is a new look for Swift, and Von Teese loved seeing the pop star dip into her world. “She’s so fan to look and such a good sport,” she says. “It’s such a delight to work with somebody like her who is not afraid to express gratitude and shine the spotlight on other people because she realized it doesn’t take away anything from her own power as a woman. A lot of people just see the mood board and they say they’re inspired by someone and they just run with it. I liked that she was not afraid to say ‘Thank you for being part of my video’ to everybody that’s in it. You don’t get that you don’t get that a lot in show business”

Even without the added boost of younger audiences seeing her alongside pop superstars, Von Teese has noticed that in the last year as she’s returned to touring the audiences have gotten bigger.

“From my point of view, I can definitely feel it growing,” she says. One important factor is that her revue is dedicated to inclusivity and diversity. She works with other artists to highlight burlesque performers of all body shapes, ages, ethnicities, and genders.

“I can’t have a 500-person cast, but I want to try to make people feel like they’re represented when they come to a burlesque show,” she says.

Still, Von Teese is facing numerous struggles in seeing the performance style gain the respect it deserves. She has found that even thought burlesque is an American invention, it is way more welcome in Europe, the U.K.,and other places around the world.

“I can’t bring my show to Tennessee,” she says, explaining that the state has strict rules around how much skin female performers can expose. Those restrictions have made it hard for her to put on a show that often showcases nudity.

“Every year I have tried to go there, on every tour. They tell me about all the regulations, and I always say the same thing. I go, ‘What are the regulations for the men in the show?’ because we have seven guys on stage. And they say, ‘Oh, well, there’s not any. They just can’t show their penis but they can wear a g-string. There’s no rules against them about their bodies.”

Even when she offered to take the nudity out of her show, she still faced hurdles. But she’s hopeful those rules and misunderstandings of the art form will change in the future, and that she can bring her show to even more audiences.

“I’m looking forward to seeing it unfold and become become more acceptable,” she says. “Burlesque is inspiring and helpful to people. It does have something behind it. You just have to see it to understand it.”