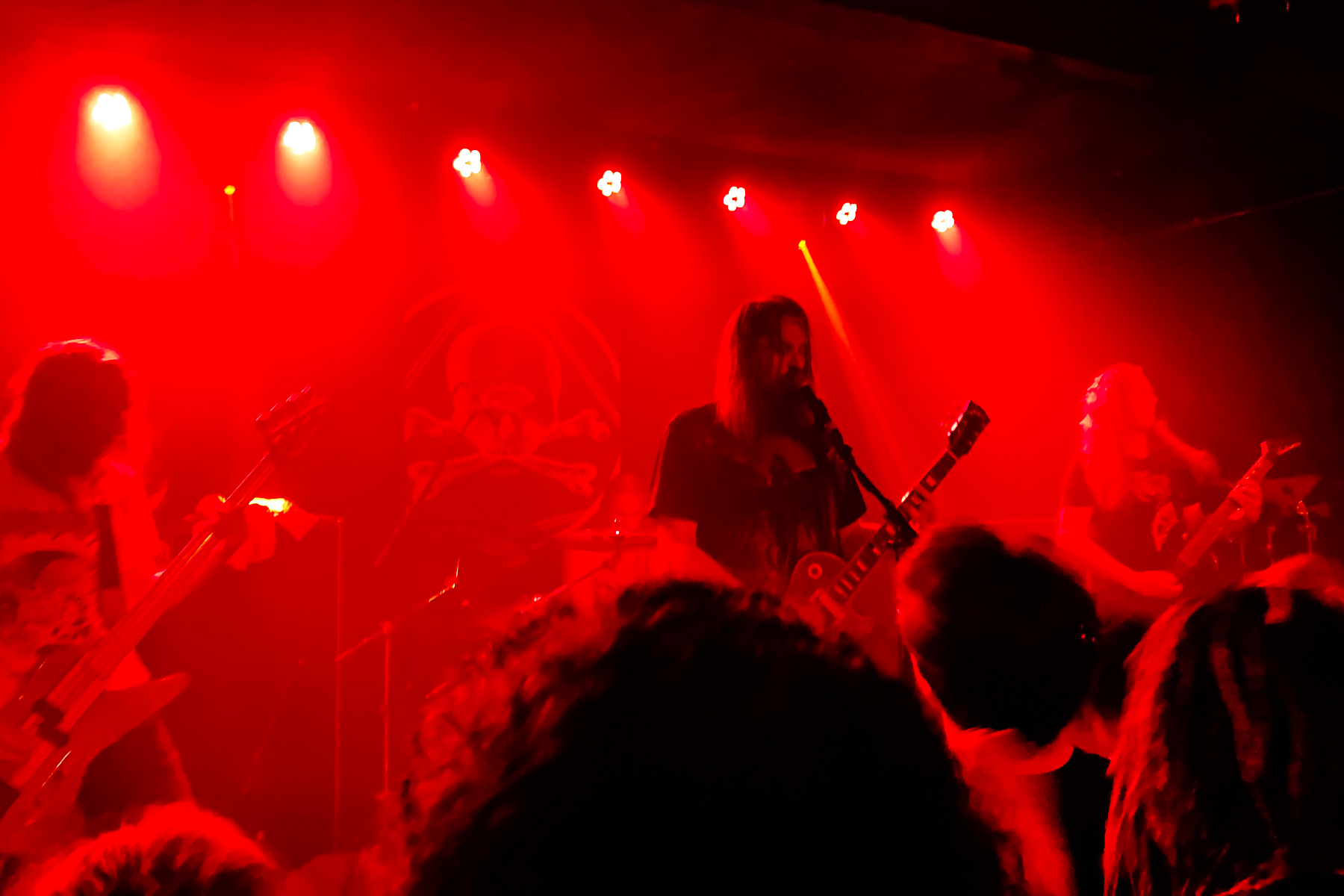 “Community! Community!” The words trumpeted out victoriously last night at Saint Vitus, a long-running metal outpost in Brooklyn’s Greenpoint neighborhood. During a brief moment between songs by Finnish death-metal apostles Demilich, a mosher had discovered a phone on the floor and called out until its rightful owner claimed it. Then he held up a pair of glasses and called out again until someone felt their way forward from the masses to regain their sight. The group’s frontman, Antti Boman, just looked out bewildered and pleased from the front of the stage as New Yorkers came together to help each other and rock out on a Thursday night. It was a celebration.

Such is the power of death metal, hard rock’s ever-maligned and misunderstood bastard child, born of the aggression of Slayer’s furious riffery and the bilious caterwauling of bands like Venom and Celtic Frost. It’s rock played at its most extreme apex before it simply turns into static noise (which sometimes death metal does.) The genre turned 35 last month on May 25, the anniversary of Death’s trailblazing debut, Scream Bloody Gore, whose “Zombie Ritual” and all its locomotive aggression fired up fans over the PA before Demilich hit the stage.

Ever since Death galvanized a new approach to metal, misfits and outcasts have flocked to the genre with dual hopes of alienating their parents and finding kinship with likeminded headbangers who want their ears punished with only the most disgusting sounds human beings can create with just guitars, drums, and Olympic-level burping. Slayer’s Kerry King recently toasted Judas Priest by saying, “If you’re not a metal fan, you’re never going to get it. If you are a metal fan, you’re never going to forget it.” The same can be said of death metal as a whole.

No band proves this maxim better than Demilich, which describes itself as “the absolutely best early Nineties Finnish jazzy-technical-guttural death metal band in the Universe.” (Their name, incidentally, rhymes with “semi-itch,” though fans at Saint Vitus chanted it with a German bent.) In 32 years of on-again/off-again metallurgy, the quartet has released only one real album, Nespithe, and that was in 1993. Nevertheless, Demilich can still sell out Saint Vitus and score upper billing on the concert poster for this year’s death-metal Mecca known as Maryland Death Fest, which took place last weekend in Baltimore. They’re a one-album wonder, similar to Lauryn Hill or the Postal Service but with no more famous band, like the Fugees or Death Cab, giving them cred and a much more diehard fanbase. The 250 or so headbangers who lodged themselves into Saint Vitus Thursday night turned the small venue into something of a satanic sauna, dripping with sweat and matted hair as the mercury climbed higher and higher during the Finns’ hourlong set.

“The first time we played here, it was very emotional,” Boman told the crowd early in the set. “Now I have no emotions.” Boman’s toothy grin, however, said otherwise. Throughout the night, he spoke to the audience while tuning, praising New York’s famous tap water while sipping a beer (one metalhead shouted out, “Wah-tuh! Yeah!” in a thick Brooklyn accent, drawing laughs) and telling stories behind the songs, which included cuts from Nespithe and the band’s many out-of-print demo cassettes and a few ragers that came out on compilations.

Sometimes when Boman announced a song, he did so in his death-metal voice, like one long burp or perhaps a proclamation from the Toad King. Just try saying the Nespithe title “The Planet That Once Used to Absorb Flesh in Order to Achieve Divinity and Immortality (Suffocated to the Flesh That It Desired …)” while belching after a swig of Carlsberg and marvel at Boman’s breath control. Each time Boman emitted one of these liver twisters, the crowd cheered. Despite the epic titles and jagged riffs and rhythms, most songs were of a reasonable length, giving the audience enough time to catch their hot and humid breath before another one. Toward the end of the set, Boman joked that while he, guitarist Aki Hytönen, and bassist Jarkko Luomajoki were old men and couldn’t play all night, drummer Lauri Rytkönen was still young (at age 38) and could play all night. Still they wrapped things up before midnight, ready to continue their victory lap in Worcester, Mass.; Chicago; Portland; and Seattle this month.

Despite the muggy conditions at Saint Vitus, the crowd — which included men and women of all ages and races and was more diverse demographically than your average pop concert — looked elated to be there. One woman offered water to anyone in her vicinity. A man pleaded with strangers to help him Shazam songs before the show started. And during the rare mosh-pit explosions, the crowd picked up anyone who fell and helped them find their phones and glasses afterward so they could make it home to take a long, hot shower. The death-metal community (and it is a community) is a rare private club where the only criterion to be a member is the willingness to submit your ears to extreme noise terror and take care of your fellow headbangers.