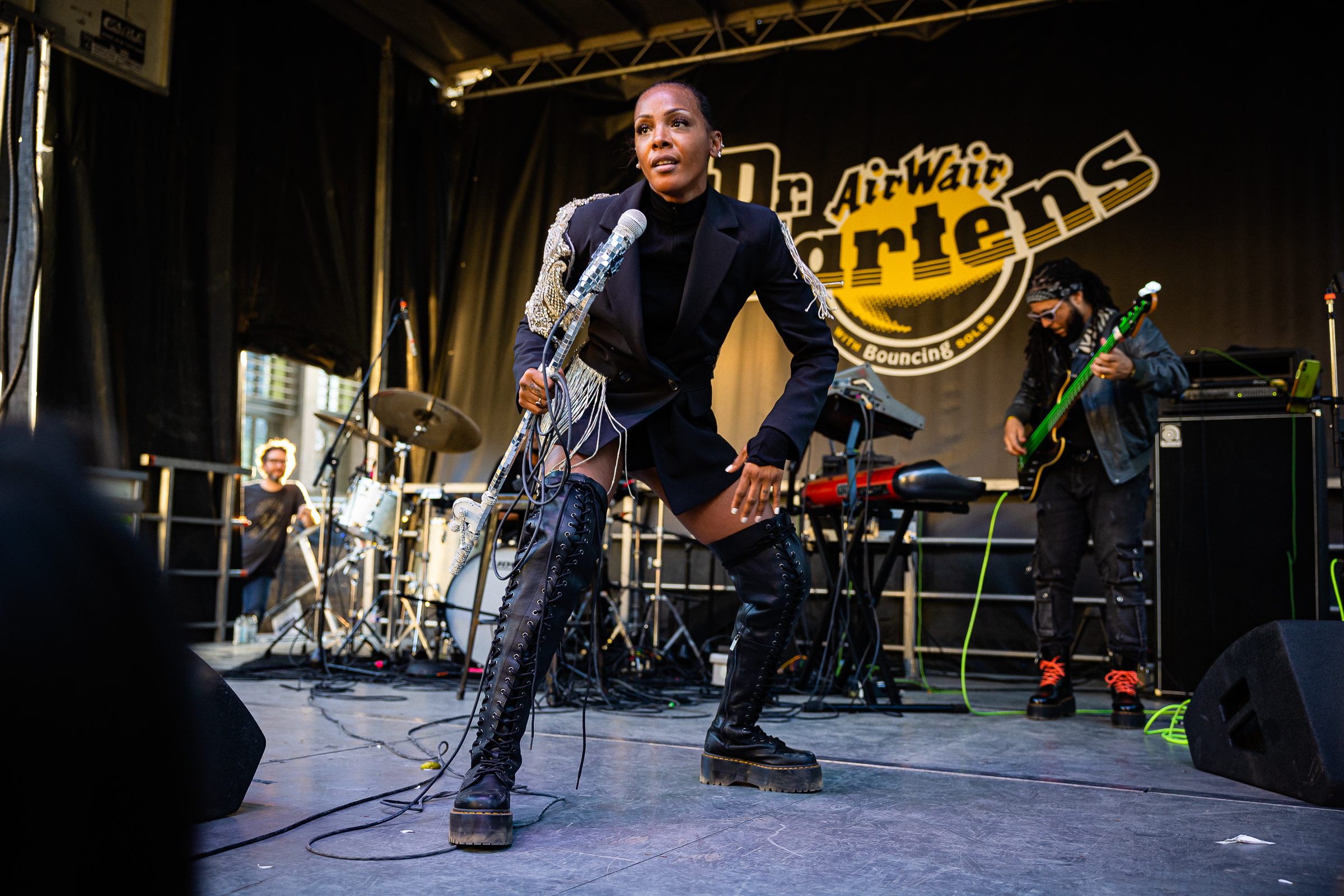 SXSW’s second day was all about diversity. There were revelatory sounds from Africa, Turkey, and the U.K., all of them shot through with a sense of pride for the respective artists’ homelands. In some cases, that meant Texas and Tennessee, too. Here’s what we saw on the stage, in the streets, and even on a boat.

We’re still feeling the reverberations from Richard’s set at the Container Bar, where she blew all the other Doc Martens showcase performers out of the water simply by showing up in black leather boots (Docs, of course) — laced all the way up to her thighs. Richard made sure to ask if anyone was from New Orleans before she tore through gems off last year’s Second Line, her sixth LP named after her hometown and the parade of dancing spectators within it. The album dabbles in everything from R&B to glitzy house, which translated seamlessly to the stage — especially the latter, best reflected in her shiny disco-ball microphone.

The crowd at the New Africa showcase at Stubb’s BBQ.

If you could harness the energy in the crowd and onstage at the New Africa showcase on Wednesday night, you could — unlike ERCOT — power the entire state of Texas. A collection of artists bringing the Afrobeat sound to a wide audience, the lineup included masters of the craft like Cape Verdean singer June Freedom and Nigeria’s Fireboy DML, BNXN, and Superboy Cheque. But it was the fans assembled that were the real show. Their cheers were the sound of elation, recognition, and, most of all, connection.

Yard Act sees the irony in being an “anti-corporate post-punk band from Leeds on a major record label,” but they didn’t let it slow them down as they burned through their 30-minute set during Day 2 of Paste Magazine’s 20th Anniversary SXSW Showcase. In between songs off their latest release The Overload, like “Dark Days” and “The Incident,” frontman James Smith made room for plenty of sarcastic banter. He even hustled his way into a few extra bucks by soliciting money from the crowd to perform a “magic trick.” With more than 100 bucks in hand, Yard Act wrapped up their final song “Land of the Blind” and Smith the stage — making both himself and the money disappear.

“We play Kurdish folk music,” the Tufan Derince Group said to begin their set at the International Day Stage in Brush Square Park. What they failed to mention, however, is that they absolutely rock. For 40 euphoric minutes, the trio, originally from Turkey, immersed fans in Kurdish culture with songs that inspired dancing, chanting, and, at one point, a joyful, rotating crowd circle. (It’s no surprise that their music is popular at weddings.) Derince, the namesake of the band, is the Eddie Van Halen of the elektrobaglama — his fingers moved up and down the neck of his lute-like instrument with lightning speed, effortlessly connecting the genres of world music, folk, and even metal. A mesmerizing experience.

For its eighth year, the New Nashville Riverboat Roadshow brought some of Music City’s finest talent to a party barge on the Colorado River. Singer-songwriters like Mando Saenz, Szlachetka, and the boat’s curator captain Jamie Kent delivered folksy acoustic sets, while bands like Sam Johnston and Khyrs Hatch brought blues-rock and funk vibes, respectively. Joshua Hedley and Gabe Lee delivered the honky-tonk, with Hedley previewing songs from his upcoming album Neon Blue and covering Johnny Bush (it is Texas, after all), and Lee hushing the crowd with heartbreaking ballads like “Eveline.” But it was songwriter Mercy Bell who had the line of the three-hour cruise: “Plan B and a Gatorade/another Walgreens on a Sunday,” she sang in the brilliant “Golden Child.” Country lyricism at its finest.

Sam Johnston of Nashville sails during a daytime showcase.

Denton, Texas, group Midlake offered a masterclass in musicianship at Geraldine’s in the Kimpton Hotel Van Zandt, previewing songs off their upcoming album For the Sake of Bethel Woods (out Friday) and revisiting catalog high points like “Head Home.” “Bring me a day full of honest work and a roof that never leaks/I’ll be satisfied,” frontman Eric Pulido sang in the latter, summing up the folk-rock group’s simple-man outlook. There’s nothing straightforward about the six-piece’s playing though — their onstage performances are intricate tapestries, a snaking musical journey that makes room for each player. Part jam, part psychedelic, all captivating.