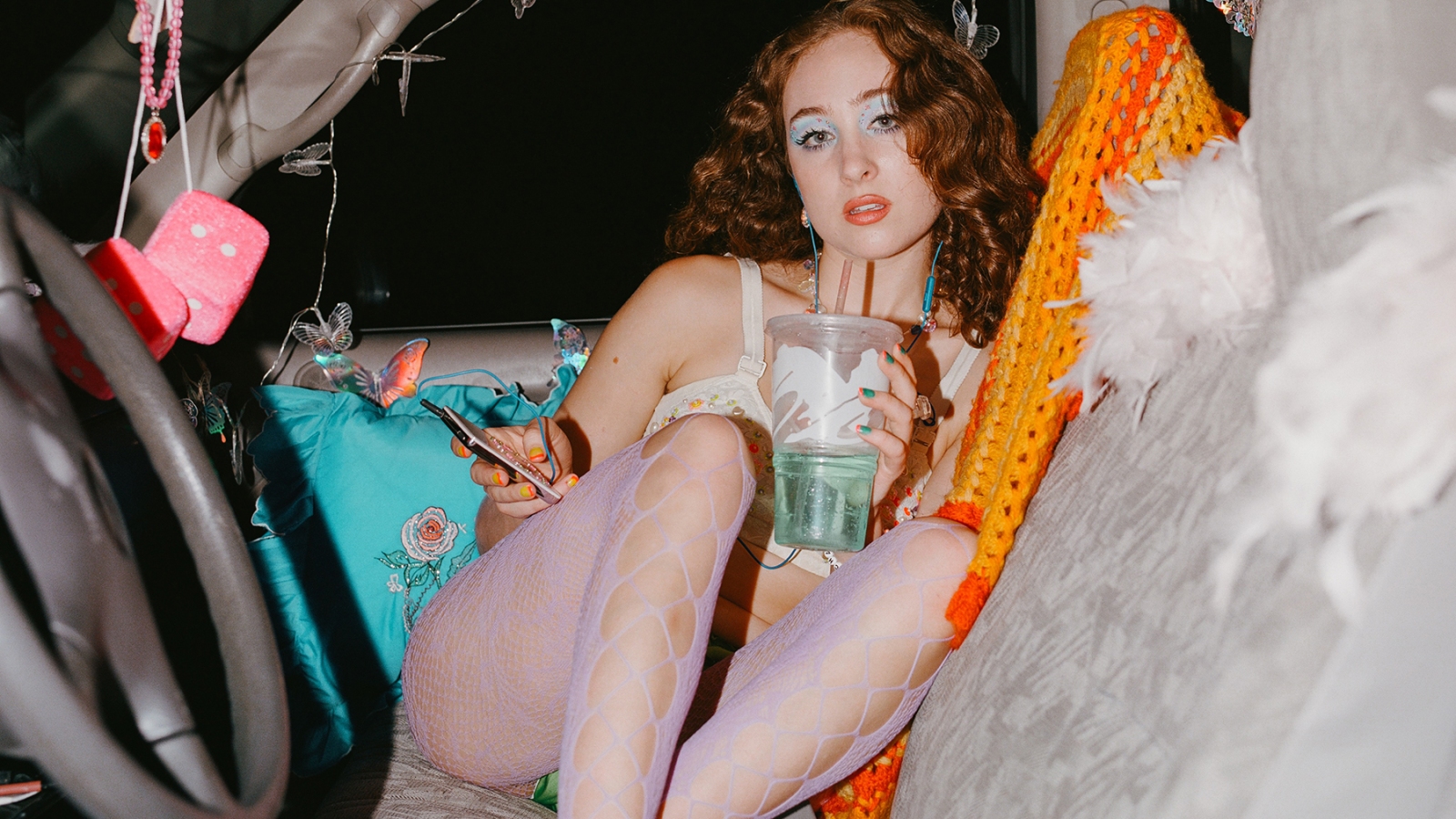 “I felt so out of place in my hometown,” the now-24-year-old recalls. “I wish it was better. I wish I had better things to say. But mentally, I had a really tough time.”

Discovering the likes of Katy Perry and other pop heavyweights of the 2010s opened up her worldview and inspired her to start writing songs of her own. She quickly caught the attention of major labels and was signed to Atlantic Records when she was 17, choosing a stage name inspired by her late grandfather (Dennis K. Chappell) and his favorite song (“The Strawberry Roan”).

“I had no idea what was going on and neither did my parents or my parents’ friends. It was so messy… I felt very unprepared. I didn’t know the consequences of how much I had to sacrifice. I didn’t do my senior year. I didn’t go to prom. I didn’t go to graduation. I missed a lot of what would have been the end of my childhood to do this job,” she says.

Up until she released her debut EP School Nights in 2017, Roan’s supportive parents would fly with their teen daughter back and forth from Missouri to LA or New York. Eventually, Roan flew the coop on her own, moving to LA in 2018. In LA, she discovered a new, free life as well as a second shot at adolescence. She was able to dress how she wanted without fear of standing out in the wrong ways. And she was able to live out and proud as a queer woman, for the first time in her life: “I feel allowed to be who I want to be here. That changed everything.”

After moving to the west coast, Roan started meeting with new producers and songwriters. One of them was Dan Nigro, the former lead singer of indie rock group As Tall As Lions who re-emerged in 2011 as a brilliant, edgy pop writer and producer with credits on albums like Sky Ferreira’s Night Time, My Time and Carly Rae Jepsen’s Emotion.

“I am really picky when it comes to writers,” Roan admits. “I like it when people push me and tell me that my lyrics or the performance is not good enough. That’s not really the case for most co-writers out here that I’ve worked with. Until I met Dan.”

They translated Roan’s L.A. puppy love into the neon bright “Pink Pony Club,” a slice of pop fantasia about wanting to be a go-go dancer at famed West Hollywood gay club The Abbey. The song was released in spring 2020, as the world was shutting down, making it increasingly more difficult for new artists to build their audiences without an immediate viral moment. “Pink Pony Club” gained some traction and attention, but not enough for Roan to be a profitable addition to her label, who dropped her in 2020.

“I burst into tears,” Roan says. She was fond of her team but understood that her project wasn’t making much money. “As time has gone on, I realized that no matter how hard that label experience was for five years, it was the biggest blessing ever. And being independent has taught me I can do it by myself.”

Still, it did take a long time to get there. Roan spent the next two years feeling completely lost, working in a coffee shop, as a nanny, and as a production assistant to support herself. The same week she was dropped, her relationship of four and a half years ended. Meanwhile, in early 2021, Nigro had the biggest break of his career so far with Olivia Rodrigo’s “Drivers License.” He had to switch gears and focus on finishing Sour with the star, while Roan struggled to find a collaborative partner she liked as much as Nigro.

“That was his biggest year ever and I didn’t want to get in the way of that,” she says. While she healed from her 2020, she was happy to take a backseat. (Roan even opened for Rodrigo on select Sour tour dates this year). But when Nigro and Roan reunited, the producer gave the singer some much-needed tough love last November.

“I was upset about my project not moving. I felt stuck and like no one was paying attention to me. [Dan] was just looking at me and goes ‘You are going to run your career into the fucking ground if you don’t start doing shit on your own.’”

It started a much-needed fire under Roan’s ass. She began building her vibrant pop world, exploring a reinvigorated sense of personal style and expression. She makes her camp, over-the-top tour costumes herself, incorporating hot pink, overflowing princess gowns and even Gushers into her designs (a bedazzled Gushers shirt will be ready for her drummer to wear on an upcoming stretch of tour dates opening for Fletcher).

“I’m the pop star of Good Will. I’m a thrift store pop star. I’m a DIY queen, know what I mean?” It’s all part of the Chappell Roan universe she’s building, one she’s cobbled together with her community of friends and trusted collaborators.

“If a five-year-old could draw a pop star, it would be me.”

She’s also had a creative renaissance as well. So far, she’s released three of the year’s finest pop songs: coming-of-age banger “Naked in Manhattan,” break-up revenge bop “My Kink is Karma,” and the bubbly empowerment anthem “Feminomenon.” But Roan’s next single is gearing up to be her biggest yet: “Casual” is a pop-rock burner that eviscerates a non-committal partner. Roan’s TikTok previews ahead of its October 28th release have already gone viral, garnering comparisons to Taylor Swift and Alanis Morissette.

Nigro and Roan first started working on “Casual” in 2020. During the pandemic, Roan had begun a long-distance, virtual relationship with someone she met online. Their exchanges were intense, with the virtual partner calling her their “dream girl” and making the singer feel vulnerable in new ways. When they finally met, Roan felt feelings she had never experienced before. A week later, however, they texted her to say they met someone else.

“I was pretty devastated,” she says. To add salt to Roan’s wound, this person had seemingly told people that the experience wasn’t that deep in the first place. “I was talking to a friend that was with them the day that they ended things with me, and they had told my friend it was nothing and was just casual. And in my head I was like, ‘What the fuck do you mean it was casual? We were telling secrets and talking literally every day!’”

The pair’s one and only IRL date never progressed past kissing, but it’s not the only confusing “casual” situation-ship Roan’s been in since. She poured out other experiences as well as some imagined scenarios into the song. With the help of Nigro and Morgan St. Jean, the song is now completely different from the original, angrier version. Nigro suggested more sadness in the lyrics and vocal, inspired by Mazzy Star and Radiohead; they compromised on the anger element with her screaming the bridge at the very end.

“I had to re-do this song several time because I was not being sad enough. I was not being relatable enough. I’ve never recorded a song like that. To get in that headspace was really hurtful.”

“Casual” begins the home stretch to Roan’s full-length debut, due out early next year. All the songs are written and just waiting on final production touches. In early November, she’ll begin touring with Fletcher as the singer’s opening act and will soon announce her own headlining tour, due to kick off in February. Before releasing some more songs, she’ll continue riding the much-deserved “Casual” buzz with a video for the song as well.

“I never expect anything whenever I release something but this I really did not expect,” she admits. It’s a moment of very scary hope for her. “A lot of times in my career, when I get my hopes up it doesn’t work out. But like, these are the numbers, you know?”