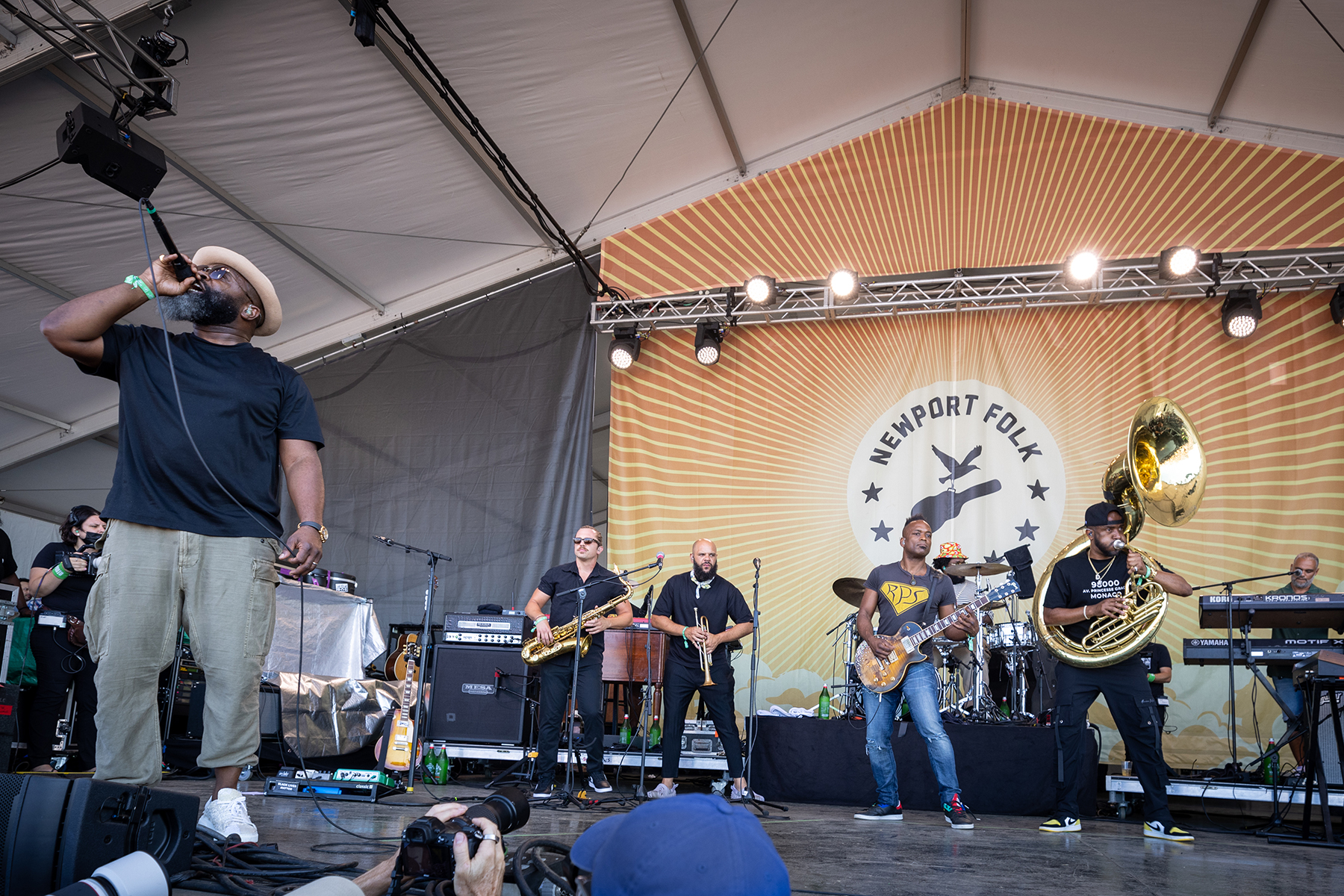 NEWPORT, RHODE ISLAND — A decade ago, Pete Seeger gave the organizers of the Newport Folk Festival a mission statement. “If you’re going to have the torch, I need to know you’re going to continue to give the people who need a voice the voice,” Jay Sweet, the long-running festival’s executive director, recalls the folk legend and festival co-founder telling him at Seeger’s final Newport appearance before his death in 2014.

What he meant was simple, according to Sweet. “My job,” he continues, “is to allow people to participate, to allow people that don’t have power to have a say in the conversation.” To do, in other words, what Seeger did as he criss-crossed the country playing protest songs on his banjo after Joe McCarthy blacklisted him in the 1950s: “To sing truth to power.”

But what does it mean to sing truth to power in 2022? To Sweet, it looks like booking the Roots, the first bona fide hip-hop act to play a mainstage set at Newport Folk. The band’s performance this year, in some respects, revived a point of contention between Sweet and Seeger, who aspired to preserve the traditional bluegrass, gospel, and roots genres celebrated at the festival’s earliest gatherings. But in Sweet’s view, the Roots’ blend of jazz, hip-hop, soul, and political poetry — the way Tariq Trotter, a.k.a. Black Thought, lets his lyrics fall “like strafing verbal bullets” — is truer to the deeper lessons Seeger imparted.

Sweet made that argument to Ahmir Thompson, a.k.a. Questlove, in convincing him to come to Newport. “‘Ahmir, I promised Pete,’” Sweet recalls pleading. “If you really want people laying out the actual trials and tribulations of what it’s like to live in this country, then the Roots are more folk music than any other artists I have on site.”

And it had to be this year, Sweet insists. “The world is teetering,” he says. “The Roots can go play 15 other big festivals and it would be great. But doing it here is a bigger statement than them doing it in any other place in the world.”

“Here” is not only the abandoned 18th-century naval fort the festival calls home, but also its specific place in the American popular imagination. The first event, in 1959, united the American folk songbook with the populist — and, often, radical — liberal aspirations to which the genre owed much of its mid-century revival. Its founders, Seeger and the late George Wein, represented “this group of people who felt they weren’t being represented elsewhere,” Sweet says. (In addition to their musical tastes and politics, Sweet notes that both men were also in interracial marriages at a time when such unions were outlawed in much of the country.)

The acoustic guitar-toting artists who arrived in Newport during its first decade did so in that spirit of challenging the status quo, performing a mix of traditional labor anthems and anti-slavery protest ballads alongside original compositions that registered their contemporary political discontent. “There’s gotta be an alternative to whatever ways of life are offered to them — Democrat, Republican,” Joan Baez said during an interview for Festival, a 1967 documentary about Newport’s early years. “I’d like to offer some kind of alternative, somehow, or help.”

So, too, did a number of artists who appeared on Newport’s stages last week and assumed Baez’s musical and political mantle. Nashville-based singer-songwriter Valerie June spoke about the unique dangers that Roe’s reversal poses to Black women before singing “Wagoner’s Lad,” a traditional folk song that includes lyrics about women “confined” and “controlled.” DakhaBrakha, a Ukrainian folk quartet, paused between songs to remind the crowd of the six million Ukrainians who have fled their country. “My job is to create a safe space where truth can be spoken,” Sweet says. “That has been never more threatened, whether it be from Covid or from presidential administrations or the music industry.”

He sees that job in grand, sweeping terms. “I don’t believe there’s a genre called ‘folk,’” he tells me from his backstage office on Sunday afternoon. “I feel that folk only connotes the people who come to see the music. Newport Folk is the audience.” It’s a cute analysis, if somewhat dubious. We’re surrounded by the event logo of a seagull carrying an acoustic guitar. A performance by Joy Oladokun, a singer-songwriter very much based in the folk tradition, hums in the background as we speak. That evening, the festival would celebrate the songbook of Joni Mitchell, one of many folk artists — virtually only folk artists — who have earned that sort of lifetime commemoration as a Sunday night headlining event.

Sweet cites several artists who he sees as tonal descendants of the festival’s early defining acts. “It’s very easy to go from Pete Seeger to the Beats to Jerry Garcia and the Grateful Dead and then everything that spawned,” Sweet says. “You can literally get from Goose to Pete Seeger in like three moves, in my mind.” Mavis Staples, the gospel legend and Newport mainstay, gets a say in Sweet’s booking choices each year. “The Staple Singers were the first gospel group to actually go play music festivals,” Sweet says. “There’s definitely a Mavis test,” he adds, pointing to contemporary Newport performers who uphold her legacy, like the Black Opry Revue and this year’s gospel showcase, curated by North Carolina instrumentalist Phil Cook.

Lineage is a serious matter for Sweet, who values bringing new voices together with their inspirations onstage. Those considerations create the conditions for headliners like Paul Simon, who emerged from a four-year retirement to surprise the crowd on Saturday evening, singing alongside Nathaniel Rateliff, Marcus Mumford, and Lucius. “It was curious to ask a bunch of 20-year-olds, ‘Are you going to be blown away by Paul Simon?’” Sweet says. “It was really nice to see that generation knows there’s a Mount Rushmore of American songwriting.”

But to simply celebrate the Simon songbook is insufficient for 2020s Newport as it strives, like other liberal institutions, to evolve with the times. That came from Rhiannon Giddens, who sang Simon’s “American Tune” as Simon accompanied her on guitar. He stayed silent as Giddens altered his lyrics — swapping “we come on the ship they call the Mayflower” for “we didn’t come here on the Mayflower” — to reflect her Black and Indigenous roots.

There’s a lingering question of who that statement is for. This is an event that annually hosts a voter registration booth, but finds fewer than 100 among the 10,000 attendees who aren’t yet registered. Where you’ll encounter a white Boomer man wearing a T-shirt insisting “Maggie Rogers Wants You To Vote.” Where you’ll meet someone with Elizabeth Warren’s face tattooed on their ankle. Where the audience is overwhelmingly white — so much so that artists of all races often comment on it as they stare out onto the sea of pale bodies.

For every Rhiannon Giddens lyric swap or Valerie June monologue, there are moments like the one when Brandi Carlile suggested that the silence of 10,000 Newport attendees listening to music could be “more powerful than any government,” presenting the sort of power that “terrifies tyrannical world leaders.” Carlile’s comments felt good to hear, but hollow in substance, especially after such a devastating Supreme Court term and a largely stalemated Democratic majority. (Governments, in fact, likely love the idea of 10,000 silent white liberals.)

Perhaps it felt truer when the blacklisted Seeger serenaded the audiences at the first Newport in 1959, at a time when right-wing politicians had gotten him banned from radio and television. Seeger himself got a sort of edge-softening this year, as the United States Postal Service put the fierce anti-war critic, onetime card-carrying Communist, and lifelong radical on a postage stamp. The stamp, with the words “Pete Seeger / Folk Singer / Forever,” debuted at Newport this year, to the delight of many, and a few raised eyebrows at the irony. Jake Blount, one of the few Black artists to perform at the tribute concert unveiling the stamp on Thursday night, told the crowd it was an honor to be able to honor Seeger’s legacy, but wondered how performative it was to put Seeger’s face on a stamp issued by an agency run by Republican megadonor Louis DeJoy.

These tensions are their own sort of Newport Folk tradition. Rolling Stone’s dispatch from the 1969 event lauded Seeger’s “talents and correct-thinking Populist inclinations,” but added that his music’s “exact relevance, for either the button-downed, horn-rimmed or the consciously unshaven and unwashed majority, was unclear.”

In her Festival interview, Baez reflected on her discomfort with idolatry and all the fans who come to see her without, perhaps, being connected to her radical politics. “The fact that they ask for things like ‘We Shall Overcome,’ and they know what it’s about, most of them,” she said, talking herself into it. ”The ones who ask know what it’s about. I think that’s wonderful.”