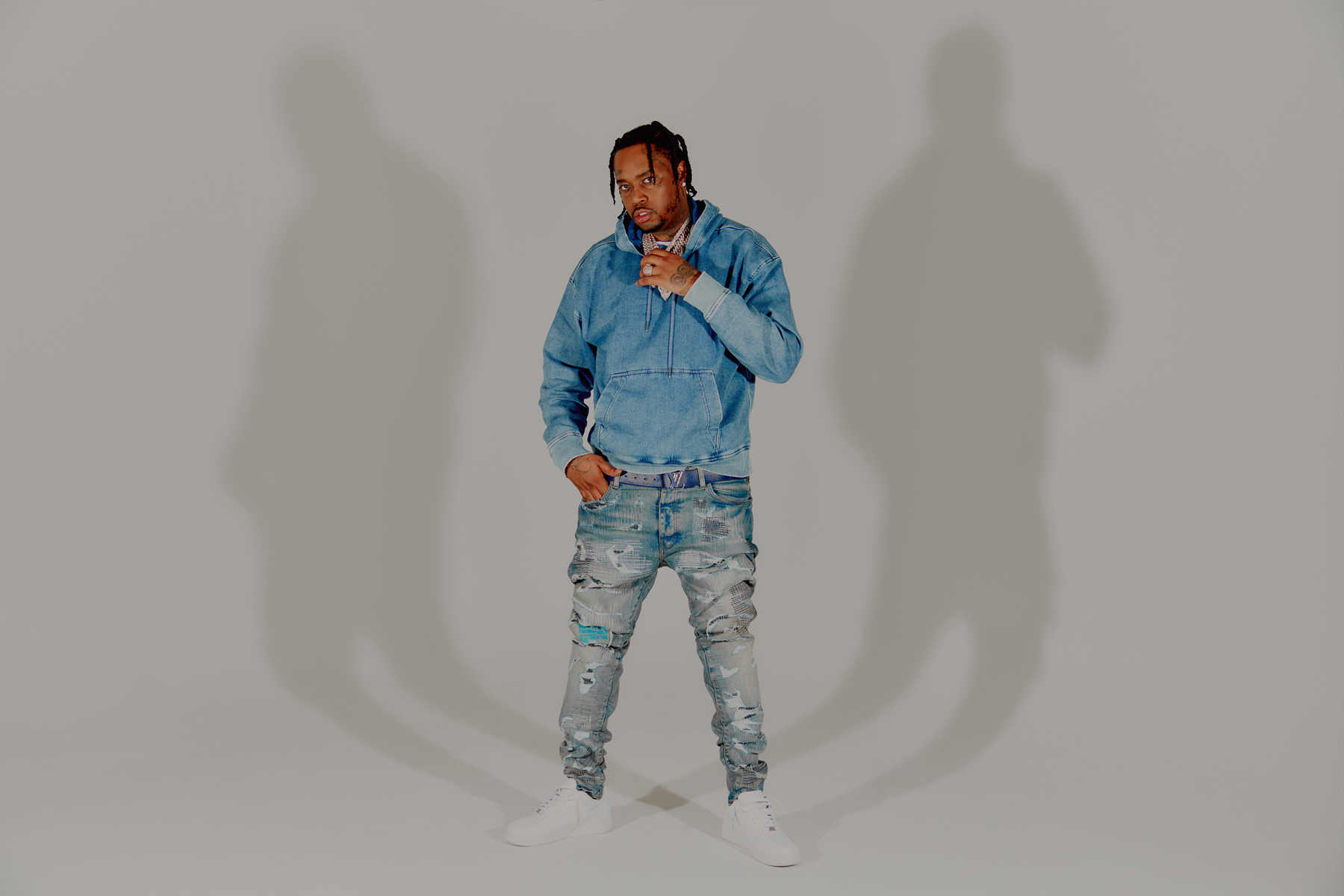 When the news broke in February that 18-year-old Jayquan McKenley, who recorded under the name Chii Wvttz, had been murdered in the Bedford-Stuyvesant section of Brooklyn, it sent ripples through a city already reeling from what seemed like one violent incident after another. Many seized on the slain teen’s affiliation with the burgeoning Brooklyn drill scene, seeing an inextricable link between the music and bloodshed — including Eric Adams, New York’s recently inaugurated mayor, who condemned drill as “alarming” and blamed it for inciting violence.

To the millions of fans who listen to Brooklyn drill, that couldn’t be more wrong. They see drill as a vibrant new movement representing an outlet for young people in some of New York’s most dangerous neighborhoods and beyond. “Brooklyn is on fire right now,” says East New York’s Bizzy Banks, who is one of the movement’s hottest up-and-comers at age 23. “We create new waves here — new dances, new words, new energy coming out of Brooklyn.”

To genuinely appreciate the wave that’s cresting in the borough that brought us Biggie, Basquiat, and Spike Lee, it helps to look first at drill’s origins in Chicago last decade. By the end of President Obama’s first term, the city labeled the nation’s murder capital had spawned a legion of young spitters such as Chief Keef and King Louie, whose dead-eyed nihilism made them an easy target for right-wing pundits. As the music made its way east, it became more worldly; the late Pop Smoke’s 2019 mixtape Meet the Woo, largely produced by London’s 808 Melo, is a landmark of Brooklyn drill whose impact is still being felt two years after Smoke’s tragic murder in a robbery gone wrong. A generation of New York youths, gravitating to the raw, unfiltered DIY aspect of drill videos, added their own flavor to the melting pot. “I love what New York did with drill,” East Side Chicago native G Herbo, who helped invent the subgenre in the 2010s, said in a recent radio interview. “They took something and enhanced it.”

Today, going outside in the five boroughs can expose you to a whole mélange of diasporic dopeness. You might find the U.K.’s signature woozy bass notes cleaving to the slick rhythms and cadences of Brooklyn, all coming from a parked car with its doors ajar, blasting the hottest new song. The stop-motion flow, the lingo, the dances, and the inherent waviness of Brooklyn drill signify the coolest city on the planet. Everything is ultramodern and swagged-out, sharp as the contours on a fresh-out-of-the-oven slice. Let the gentrifiers call in a complaint — the music isn’t about to stop.

Bizzy, whose video for his 2021 song “Quarantine Freestyle” has racked up 1.7 million views on YouTube, is proof that Brooklyn drill is about much more than promoting violence. For starters, he’s a bona fide lyricist: His bars are precise, and his slang is dense. “I actually rap, like wordplay and metaphors and punchlines,” he says. “A lot of people don’t really rap. When it comes to drill, people say what sounds cool. I make stuff make sense.”

Bizzy was a protégé of the late Pop Smoke, and he feels strongly that the negative content in drill songs is more of a symptom of larger issues than it is a cause. “I feel like the music just let you know what’s going on,” he says. “The violence be already there sometimes.”

Cory Pegues, former deputy inspector of Brooklyn’s 67th precinct and an expert on gangs, agrees that much of the negative media attention on drill rappers is missing the point. “I don’t think it’s just drill,” the retired police officer says bluntly. “Most of these rappers, they come from the low end of the totem pole — no education, no heat, no lights, no gas. These kids are speaking of what they live.” (Pegues is also skeptical of linking the genre to a rise in crime: “I want to see the numbers. If you’re going to say this drill music is out of control and killing everybody, then I’m about facts.”)

B-Lovee, who hails from the Bronx’s Andrew Jackson Houses, seems dedicated to showing that there are other sides to the genre. The Columbia Records signee, whose Wayne Wonder–sampling single “IYKYK” has millions of Spotify streams and YouTube views, makes smooth, R&B-centric hits with a hint of grit that capture the fun of an uptown summer park jam. “I try to make all different types of music, so I won’t be stuck on the same sauce, just straight aggressive drill,” says B-Lovee, 21. “I want to make songs for the ladies, songs for the people that’s getting fly.”

B-Lovee’s South Bronx neighborhood sees 20.5 serious crimes per 1,000 residents annually, according to a 2020 report by the NYU Furman Center — more than double the citywide rate — but he wants to steer clear of violence and negativity. Back in February, he was one of several drill artists who met with Adams to discuss the music’s impact on New York’s young people: “We sat down, talked, and that was a good experience. It was good to have the talk.”

Back in Brooklyn, 22Gz reflects the harsher tones of the scene’s beginnings. While other New York rappers his age were still trying to land a freestyle on Funkmaster Flex’s popular Hot 97 radio show, he stormed social media in 2016 with the ruthless jack-boy anthem “Suburban,” delivering lyrics in an intense torrent of coldblooded bluster over a funereal, synths-driven track whose bass tones echoed the U.K. He had, low key, birthed a new sub-genre — a legacy he’s eager to discuss. “I definitely say I started Brooklyn drill,” says the 24-year-old artist. “All the other artists who was around that time helped me to build Brooklyn drill, but I was the pioneer.”

Though the content of 22’s songs can be grisly, he views it all as art. “It’s like Picasso — you can’t tell him to paint the picture a certain way,” he says. The lyricist behind such artful threats as “hollow gon’ rip off his shoulder, that’s a poster” is quick to add, though, that other drill artists need to lay off some of the more mindless clichés. “I feel like the drill rappers could chill out with, like, putting the guns in the videos.” he says. “Just try to not give off that image as much. ’Cause they kind of making it a problem now.”

22 sees Brooklyn’s multicultural makeup as the key to drill’s rise. “It’s the Caribbean vibe mixed with the American vibe, and you put that together,” he says. “Plus the Brooklyn drip, the clothes and all the swag. It was just perfect.”

Sheff G is another Brooklyn drill architect who sees something magical in his borough. “You know Brooklyn — we gonna put on our own sauce on shit,” he says. “We ain’t never gonna copy nobody’s style.”

He sounds so upbeat, you would hardly know the artist born Michael Williams, age 23, is calling from Bare Hill Correctional Facility in Franklin County, New York, where he’s been serving a second-degree weapons sentence since last year. (”I’m in the trenches!” he says with a chuckle.)The Flatbush native, who burst onto the scene in 2017 with his grime-influenced loosies —and had producers clamoring for his attention, labeling their own compositions with the phrase “Sheff G type beat” — is open about how society misrepresents rappers like him as inherently violent. “Guns don’t kill people, people kill people,” he says, matter-of-factly.

Sheff is also clear on how his influence continues to propel the movement, especially so-called sample drill — the latest iteration of the scene, where old songs get sampled and thrown on top of drill drums. Sheff notes that his 2019 song “We Getting Money,” which sampled a ghostly vocal from Japanese singer Hiromi Ōta, and his and frequent collaborator Sleepy Hallow’s 2020 single “Tip Toe,” based on a Tiny Tim flip, are early examples of this trend. “If you see the songs that’s coming out now, a lot of the songs got samples in it, with female voices and stuff like that — me and [Sleepy Hallow] was already doing shit like that,” he says.

Having grabbed the torch from the first wave of Brooklyn drill’s innovators, Fivio Foreign is all about the genre’s future. The gravelly-voiced rapper took over the second half of 2020 with his viral hit “Big Drip,” whose video has a whole Hennessy-brandishing squad smoking zaza in front of a Shake Shack, of all places — bringing big roll-up-a-Backwoods-on-the-last-car-of-the-subway energy to a part of Brooklyn where the average overpaying tenant probably rides a unicycle to work.

There’s a ton of negative space in Fivio’s delivery (he says he’s on demon time), and each staggered bar feeds off an exuberant burst of energy. When he utters his patented “ayy, ayy, ayy!” ad-lib, it’s as if he’s reprimanding someone for interrupting his flow.

Fivio’s profile got a boost last summer when Kanye West featured him on Donda, giving the drill dynamo a chance to showcase his socially conscious side on “Off the Grid.” And while he’s personally overcome many of the negative conditions that still surround other drill artists, he recognizes that there’s still a lot of work to do.

Reached for an interview, he’s most excited to talk about the nonprofit he began in 2020, Foreignside Foundation, and its programs for at-risk youth and families of incarcerated people. “I’m just showing people there’s another option,” says Fivio, 32. “Listen, there’s more to us. We also here to help the community, know what I’m saying? We just wanna change the narrative, the perspective of drill music, period.”

22Gz is optimistic about where drill is headed too. “I like where I’m at with this rap shit,” he says. “I feel like I could get a little more credit, but it is what it is — as long as the shit keep going. ’Cause I really made the sound so the youngest can have a voice in the city. You feel me?”