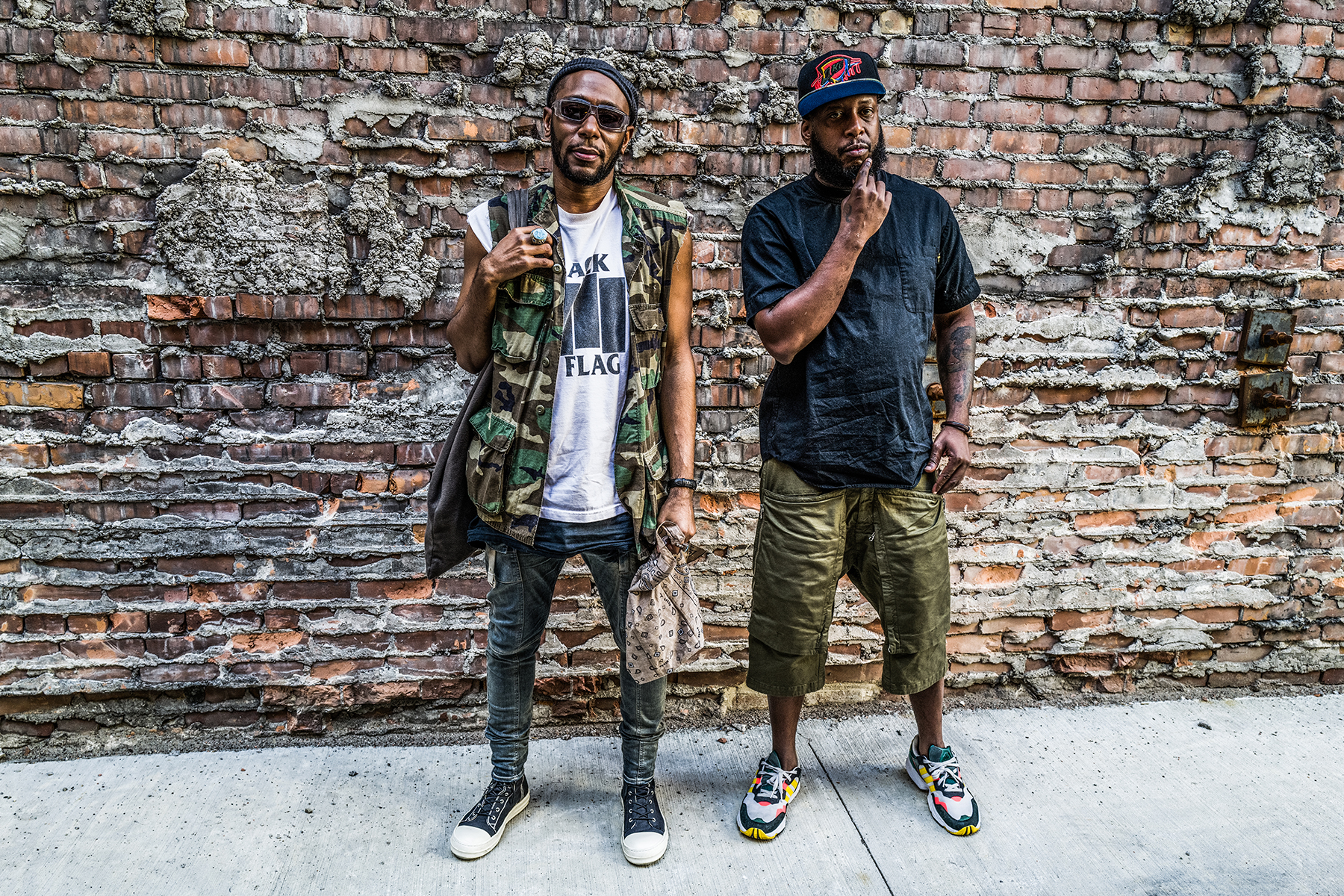 When Talib Kweli and Yasiin Bey announced that their long-delayed, highly anticipated new album, No Fear of Time, was to be released through Luminary’s podcasting network, the news signaled an impossible-to-ignore, best-of-both-worlds scenario.

In choosing to distribute their follow-up to 1998’s Talib Kweli and Mos Def Are Black Star through Luminary, where they also host The Midnight Miracle podcast along with Dave Chappelle, the beloved Nineties duo are embracing a broad-minded and  fan-focused model for this eager age of merchandise bundles. And despite Luminary’s $2.99 subscription fee, the release caters explicitly to Black Star’s dedicated fan base, while also, perhaps intentionally, giving the finger to the major streaming services and record labels.

This buck-the-system mentality seems in line with Black Star’s radical ethos. On their remake of Slick Rick’s “Children Story,” Yasiin Bey, FKA Mos Def took shots at the late-Nineties Bad Boy era’s willful embrace of cookie-cutter materialism. And on the blistering “OG,” off their latest effort, Talib Kweli declares, “YouTube, they feedin’ us through a catheter/I’m ‘bout to call up Yasiin and move to Africa.” It’s like the streaming era’s agitated version of “tune in, turn on, and drop out. Assuredly, No Fear of Time looks to maintain the duo’s grassroots stance, while anticipating a new and interesting path for artists in our algorithm-driven digital age.

Back in the Nineties — just a few years before Black Star made their debut — time all but stopped when our biggest artists had something new to say. When Will Smith, before the slap heard around the world, had a new song or video to promote as the Fresh Prince, it became a prime-time exclusive you had to tune into after your favorite show aired. In theory, this blockbuster promotional model has long gone the way of the dinosaur, or, well, Blockbuster Video.

However, in practice, things aren’t all that different today. Somewhere between the labels and your AirPods, streaming services intercede with “recommendations” of new albums with the expectation that this or that band could be your life. You’ll pay 10 bucks for an app to tell you what your day should sound like, based on the hot new releases you have to drop everything to just to absorb. Meanwhile, the artists you listen to — on the DSP of your choice — often have competing motives that affect you in several crucial ways.

What’s missing is the opportunity to engage the listener on her terms. She doesn’t have time to hole up in her apartment all day, just to listen to an album. And she may think it’s corny to blindly cow-tow to some major label’s big-ticket idea of New Music Friday.

Releasing albums via podcasts means directly targeting listeners already used to hearing pre-approved content of their choice. And often while they’re on the go. Plus the paywall structure provides an incentive for artists who may be discouraged by the reportedly low wages paid to artists through streaming services.

Hinting at music’s potential for drawing in listeners through podcasts, Ice-T, one of the first rappers to host one, told the late Loud Speakers Network co-founder, Combat Jack in 2014, “You know what I love about [podcasts]? Nobody’s listening that don’t want to.” “You could pop up on a radio station—motherfuckers be like, ‘I’m not really checking for this,” he continues. “To listen to a podcast, you had to make a conscious decision to go in. I like it because you have a truly captive audience.”

Similarly, Black Star knows their audience — especially after a 24-year wait — will be interested in hearing their new album on its terms. They cut out the middleman and therefore don’t have to deal with a streaming service or label trying to tack their brand onto a cliché catchphrase or gimmick that’s antithetical to what they represent.

Other artists have previewed music through their podcasts — the Pixies gifted fans with snippets from their 2019 album, Beneath the Eyrie through weekly webisodes on their It’s a Pixies Podcast; and YouTube phenom mxmtoon also gave listeners a step-by-step journey through the recording of her 2019 album, The Masquerade, on her podcast, 21 Days With mxmtoon. But so far, no artists of note have released full-length projects through a podcasting platform.

The music on No Fear of Time matches the album’s anarchic rollout (as does the freewheeling, politically oriented discussions on Talib and Yasiin’s The Midnight Miracle podcast, which comes as a part of the package). Produced entirely by Madlib, the album continually refers to individuality and artistic freedom, with the phrase “everything is not for sale” practically serving as a leitmotif.

On “Bugs Bunny Mathematicx,” the first episode of the latest season of The Midnight Miracle, Yasiin Bey complains about the disconnect he sees between art and the way it’s packaged and sold on streaming services. “When people talk about works of art, you are not talking about inanimate objects. You are not talking about a pair of Levi’s 501 jeans that have all the rivets placed strategically,” he says. “[Art] is a dynamic, customized experience. It’s not a standardized thing. And I think the problem with that type of attitude towards art, as it engages technology, is that because the technology is a conduit to take it to the audience, that is what needs to be the priority.”