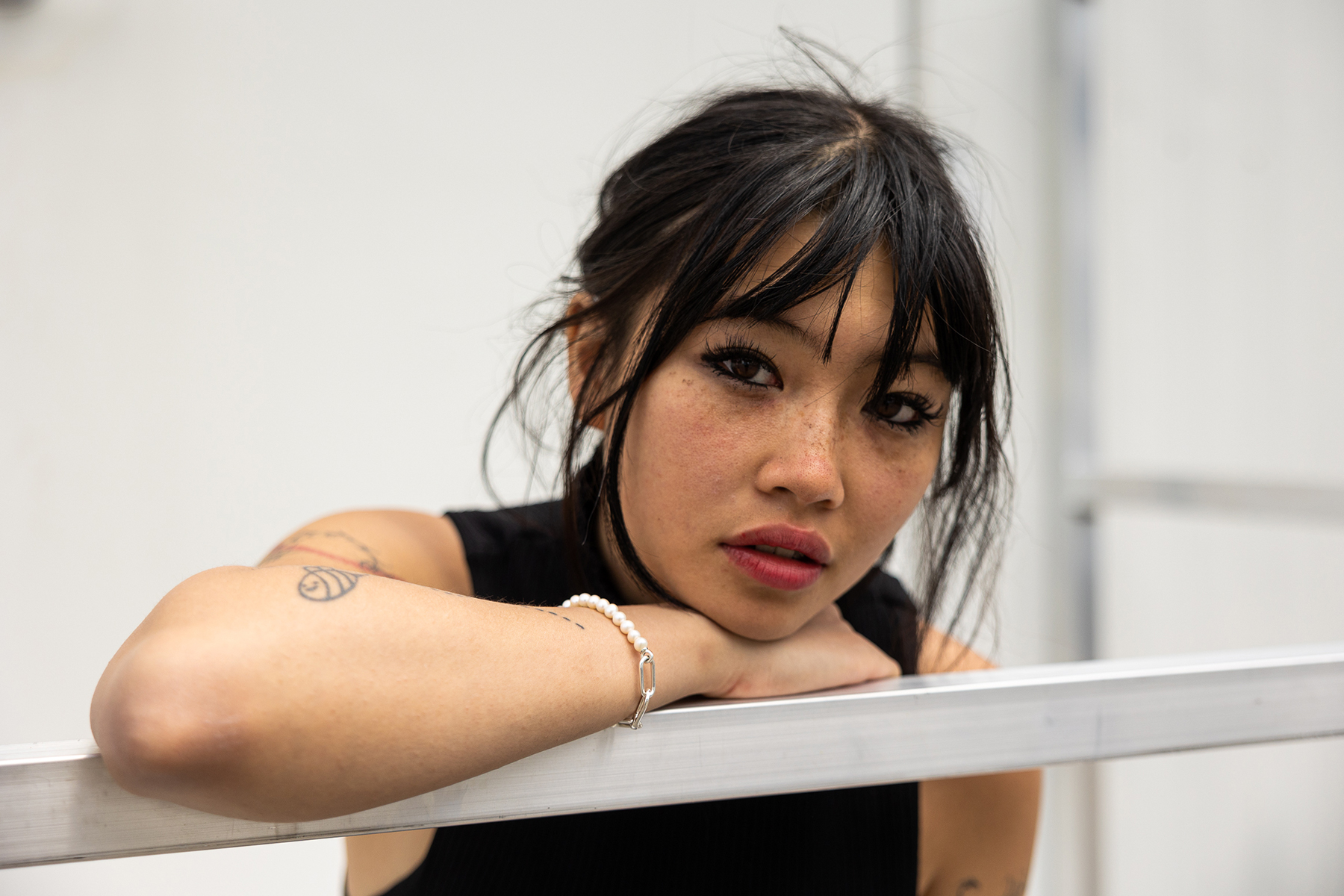 Bea Kristi was tripping so hard, she was seeing things. The 22-year-old singer-songwriter had just finished her debut set at Coachella back in April and decided to take shrooms, as one does at a music festival. It was the first time she’d done them outside of her hometown of London, and she was already anxious, so the experience unraveled into a funhouse of hallucinations.

“The only good time I had was while I was watching Doja Cat,” Kristi recalls over a video call in May, in the middle of a tour opening for Halsey, where she’s playing to crowds of 25,000 for the first time. She’s a ball of laughter and mischievous grins while telling me of that chaotic evening in the desert two months before. Things had chilled out a little, she continues, until she started perceiving the background dancers on stage as terrifying monsters. “I was like, ‘What is going on?! I’m just going to not even process that,’” she adds with a giggle.

The line between real and make-believe has always been blurry in the music that Kristi writes as Beabadoobee. In her Nineties-inspired indie rock anthems, she’s unafraid to tease out her inner swirl of paranoia and distorted realities, and in conversation, she’s candid about her mental health, therapy, and how she uses substances for both coping and self-discovery. After breaking out with her 2017 viral hit “Coffee,” she has become a modern slacker-rock icon in short order. “I think a lot of people relate to the things I write,” Kristi says of her global listenership, which stretches from Los Angeles to Jakarta. “A lot of people see themselves in me.”

Songwriting for her is a way to “vomit my feelings,” as she puts it. In the past, she sang about bed bugs, sleep paralysis, and not wanting to be alive. But with her second album, Beatopia, she exhibits a newfound self-acceptance that pushes her to confront her demons and revel in her unfettered imagination. She digs eagerly into self-deprecation and past trauma on songs like “Perfect Pair,” a samba-inflected track about hating others for the same reason you hate yourself, and “Broken CD,” a wistful folk song about feeling stuck in a painful memory.

But even as she imparts her darkest worries, she commits to working through it all, her voice layered in sorrow and hope. On “Fairy Song,” she coaches herself to “drink water” and “speak to your brother” until the song unravels into noise, as if she’s allowing herself to celebrate her disorganization. On the raucous single “Talk,” she tells an ambiguous figure, “You don’t exist/You’re my imagination,” as a way to stand up for herself. “I think all the problems that I faced growing up, [they were] kind of manufactured by my own brain at times,” she says. “Then I realized that everything I’m scared of isn’t technically real. It’s all something I had created. Saying that out loud makes me feel so much safer.”

Throughout, she makes reference to fairies, an idea that influenced the ethereal electronica and psychedelia that she folds into her palette of grunge, folk, and shoegaze. “They’re beautiful and whimsical, but there’s also something quite sinister about them,” she says of her favorite winged creatures, adding that she also found inspiration in Cibo Matto, Stereolab, Stars, Stina Nordenstam, and Masakatsu.

The album is named after a fantastical universe that Kristi invented when she was seven years old, complete with an original alphabet and map. “Being a kid and not understanding anything you’re going through, it’s quite natural to make your own world up,” Kristi says, citing difficult family events and moving to London from her birthplace of Iloilo City in the Philippines when she was three years old as the root causes of her early confusion. After Kristi’s school teacher found her elaborate poster depicting Beatopia, she says he berated her for it in front of the class, and she never thought about it again.

In quarantine, memories of that self-made world came back. “I was finally coming to terms with everything that happened to me when I was a kid,” she says. “I was actually not looking back with disgust and anger… It was more, hopeful? With my last album, Fake it Flowers, I was almost tangled in the past and excusing my behavior as a young adult because of shit that happened when I was a kid. But I didn’t want to be tied down anymore. I wanted to grow from that [instead of] feeling trapped in it.”

During those formative years, Kristi felt “like an alien,” especially as she was expected to conform in an all-girls Catholic school in London; her teenage acts of rebellion included telling her classmates she was gay. (She now identifies as bisexual.) Even trying to relate with fellow Asian kids was hard. “I would be showing them this music, and they’d be like, ‘That’s devil music, dude,’ and I’d be like, ‘It’s Green Day,’” she says with a laugh.

By contrast, a light flickers across her face when she recalls moments spent with her cousins during yearly trips back to the Philippines. “The electricity would cut off all the time, and all you do is sit in the dark and talk with candles, while it’s pouring rain outside,” she says. “It’s the funnest thing in the world.” Kristi cites Original Pilipino Music — a genre led in the Eighties and Nineties by acts like APO Hiking Society and Eraserheads that encompasses both disco-inspired dance tracks and sentimental ballads — as a key influence on her songwriting style, along with the Nirvana and Cranberries hits that her mom introduced to her.

On Beatopia, Kristi also addresses the whirlwind of emotions that came with the instantaneous success brought by “Coffee,” which led to her deal with Dirty Hit, the label she shares with the 1975 and Rina Sawayama, when she was still in high school. “Ripples,” a melancholy song layered with strings, is partially about being a young artist and feeling like “you can’t really speak up at times” within the male-dominated music industry. “When I got signed, I was really young,” she says. “Everything that was happening in my life didn’t necessarily feel real, or I didn’t understand what’s going on. On that specific song, it’s just me realizing, Holy fuck, I am just completely lost.”

Has she learned to navigate these uncomfortable power dynamics? “I don’t think they’re necessarily healthy strategies, that’s the problem,” she admits. “At times, you know what they want to hear, so you say [that]. That’s your way in to get what you want, but that can’t be the norm constantly. It’s just remembering your truth, that you’re your own boss. That this is your creative project and sticking to that. I’m working on it.”

Even as her star rises, Kristi maintains that music-making is still a hobby, while her main purpose is “to be that person I really needed when I was growing up, for girls that look like me, that feel like me,” she says. To make more of these connections, she hopes to soon release a song in Tagalog, and she recently wrote one with the help of her mom.

When she returns to London, Kristi has her sights set on decorating her brand-new house as the fairy paradise of her dreams, after moving out of her parents’ home two months ago. It’s a major step into adulthood that is “very on trend with Beatopia, finally accepting myself,” she says. “It goes hand-in-hand with getting this place with my own hard-earned money and learning to be by myself, learning how to cook.”

She has a purple velvet couch and two bright yellow chairs coming in, and there’s a plan to turn the terrace into a forest of plants. But there’s just one thing she has to do before it feels like it’s truly hers. “I have yet to write a song in it,” she says, “I think that’s when it will be christened.”