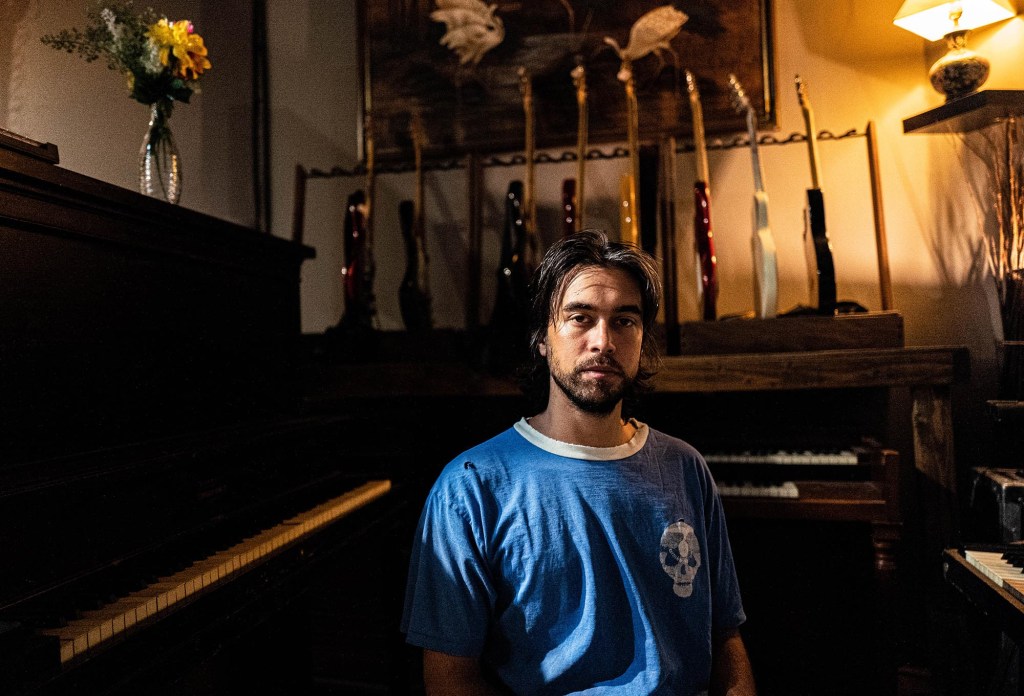 Last year, Alex Giannascoli was ready to make a change. After years of living nomadically around Philadelphia, the oracular singer-songwriter who performs as Alex G felt like settling down. So he and his longtime partner, violinist Molly Germer, bought a place of their own. “We got this old house and spent a couple months taking off wallpaper and putting up ceilings and stuff,” says Giannascoli, 29. “It’s pretty nice in there now.”

Since releasing his first demos on Bandcamp as a teen more than a decade ago, Alex G has grown steadily in influence and acclaim, each album and tour bigger than the last. He’s regarded as a peer by generational talents like Frank Ocean, who invited Giannascoli to play guitar on 2016’s Blonde and some live dates that followed — and, like Ocean, he’s revered by a cult of fans who see something pure and real in his emotionally direct, lyrically cryptic songs and his carefully guarded public presence.

Alex G’s latest album, God Save the Animals, is a tour de force, wrestling with big ideas about life, religion, and art without ever making quite clear what he thinks about any of those subjects. Its choruses are haunting, its vibes profound. It seems guaranteed to add to an audience that is already big enough to sell out multiple nights at venues like New York’s Webster Hall. And with very few exceptions, it’s an album that follows the same creative pathways Giannascoli has trusted since he made his 2014 breakthrough, DSU, in his junior year at Temple University. He writes the songs on his own, meticulously recording each instrumental part layer by layer and tweaking lyrics in a search for the right feeling; if he feels like a song needs something more, he’ll call in one of his bandmates to play drums, bass, or guitar.

“There’s no ethos about it,” Giannascoli says. “I figure, ‘This is what got me here, doing it like this.’” He thinks about it some more, weighing his feelings about the success he’s won by being himself. “I don’t want to jinx it,” he adds finally.

The tracklist for God Save the Animals features four songs recorded with contributions from his friends Sam Acchione on lead guitar, John Heywood on bass, and Tom Kelly on drums, and a couple with strings played and arranged by Germer. The rest of the album, for the most part, is all Alex. You wouldn’t necessarily be able to tell the difference between these two modes without consulting the liner notes: “Runner,” for example, which summons a heartfelt rock-band energy reminiscent of Tom Petty, is a solo joint, with Giannascoli listed as playing drums, acoustic and electric guitar, bass guitar, piano, and synthesizer. “Blessing,” a strangely mesmerizing nu-metal/whisper-rock/chamber-music experiment that sounds for all the world like something a guy like Giannascoli might cook up in an empty room on a series of late nights, features the full band behind him.

“I’m proficient at guitar, but Sam is really good,” he says when I ask about the easygoing ballad “Early Morning Waiting.” “So I sent him the song, like, ‘Can you play on top of this?’ And he shredded.” To him this seems like an obvious choice. So does everything about his music and lyrics, more or less — a series of well-worn forks in a creative road that hasn’t guided him astray yet. “I’m not necessarily a wordsmith,” he says. “I know how to do it by spitting shit out. Maybe it’s true, maybe it’s not. Maybe it’s just some random shit.”

The idea of fame has always weirded him out a little. When he looks out at a couple thousand people gathered to hear him perform, he wonders sometimes who they are. “As the crowd gets bigger, the percentage of people that’s like, ‘What the fuck is this?’ keeps growing,” he says. “It’s complicated, I guess. I’m just so grateful.”

In fact, Alex G’s career exists at the level it does because his fans find his music deeply meaningful. At his shows, they grow hushed listening to early solo songs like 2012’s quietly devastating “Change”; when he switches up the mood with an unexpected screamo interlude, they love that, too. The fact that he has almost no social media presence or celebrity profile compared to many of his indie-rock peers seems to add to these fans’ devotion: He’s a mystery people can project onto.

“That’s how I listen to music,” he says. “When I was younger, I had Modest Mouse, then Elliott Smith, then Radiohead, one at a time — like, ‘I’m obsessed with you.’… It feels like they’re your friend. It’s kind of trippy thinking that’s what my music is doing [for other people].”

The newest and most striking aspect of God Save the Animals is a persistent interest in religious themes. The first words on the album, over a gently falling chord sequence, are: “People come and people go away/Yeah, but God, with me he stayed.” A few tracks later, through a thick haze of vocal processing, he plays with another way of thinking about divine power: “God is my designer/Jesus is my lawyer.”

Giannascoli says these motifs are not indicative of any major shift in his own thinking — “I don’t have a real coherent statement about any of it” — just a reflection of something he’s observed around him. “A couple people close to me became religious suddenly,” he says. “It’s a radical change, if you’re going to make that leap of faith.” He recently read author Joy Williams’ 2016 microfiction collection 99 Stories of God: “I don’t know if this was her intention, but it exposed me to the idea that you can just throw these themes up and not know where they’re going to land.”

The prettiest song on the album, “Miracles,” is written from the perspective of someone facing down adult responsibilities. “You say one day we should have a baby/Right now, baby, I’m struggling, we’ll see,” he sings over Germer’s sweet country strings. In the next verse, he wonders: “How many more songs am I supposed to write?/Before I should turn it off and say goodnight.”

Giannascoli, who will turn 30 in February, says he wrote that song based on “a temperamental feeling,” with no deeper intent than expressing the thought that was crossing his mind that day. “There’s plenty of times I sit down, I’m trying to write, and that feeling never comes, so I just don’t do anything,” he says. “And honestly, as I get older, it’s fewer and farther between that something is getting me there. So who knows? Not that I waited that long to make this record, but it’ll probably take me a little bit longer each time.”

He shrugs. “Any form of trying to control it gets in the way,” he says. “You just have to let it go.”