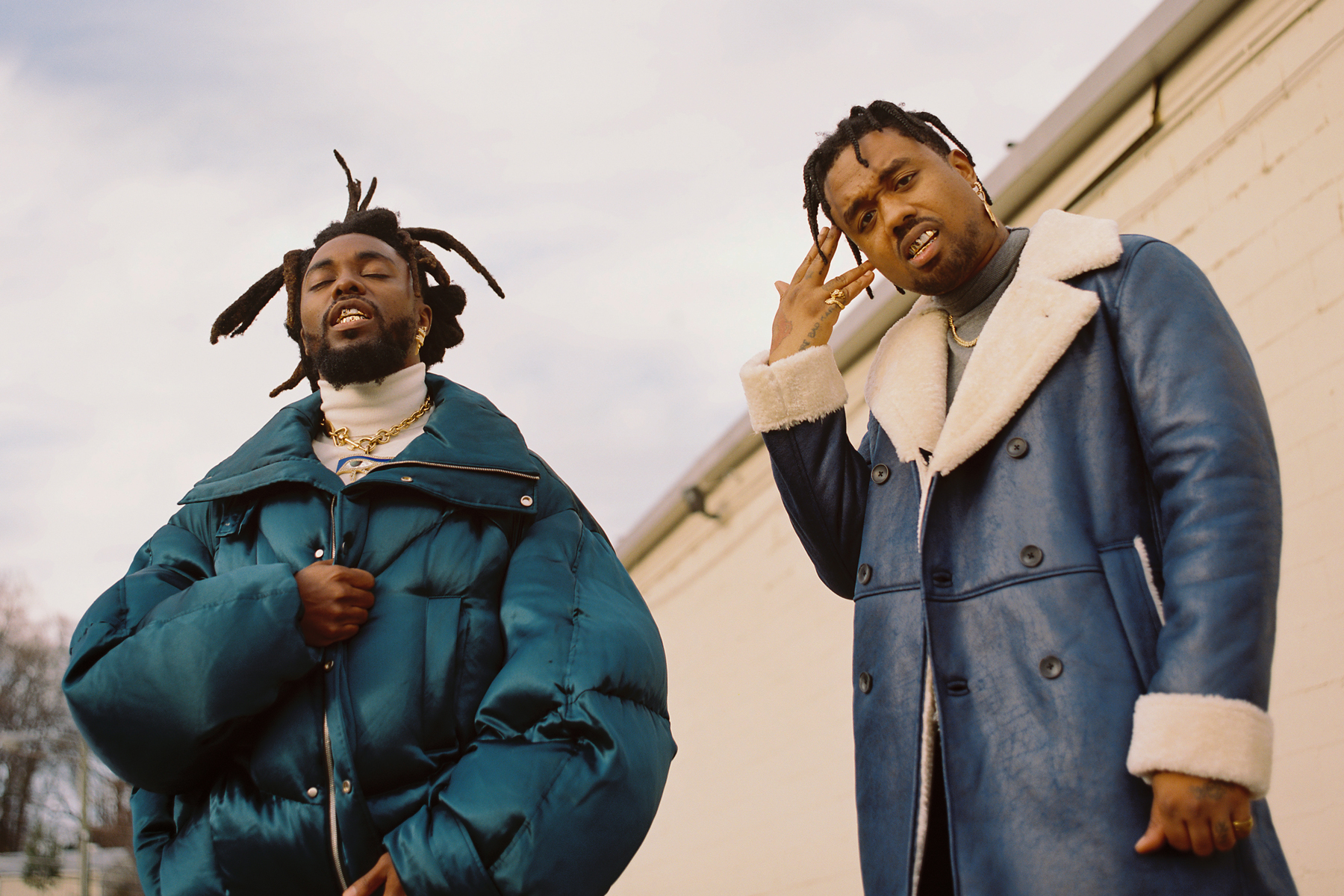 The two Atlanta rappers in Earthgang know their music has a tendency to cover a lot of ground. The duo, comprised of Olu (a.k.a. Johnny Venus) and WowGr8 (born Eian Parker), have spent the past few years reinventing Southern rap at a pace as dizzying as it’s been dazzling. For their second major-label album, Ghetto Gods, they decided to give listeners a road map. It started with shooting a sequence of five music videos to get across the sounds and themes on the project. “We’re so creative, and we have so many great ideas and so many great stories to tell,” Olu, 32, explains over Zoom. “We feel like it would be to our betterment that we put it in forms where people are able to digest it.”

The pair’s full-length major-label debut, 2019’s Mirrorland, presented a kaleidoscopic view of Black life in Atlanta. Inspired by The Wiz — the 1978 Wizard of Oz adaptation starring an ensemble cast of Black icons — that album’s tone was decidedly whimsical. “I love that word in any context,” says WowGr8, 31. “That shit was whimsical. It’s not like our lives was necessarily better or easier, but it was prepandemic. It was big optimism for the follow-up tour for that.”

Now, with Ghetto Gods, optimism has made way for something more resilient. It’s easy to feel hopeful about the future when times are good, but it’s something special to have faith in times like these. “We know where we’re from,” Olu says. “We see the effect the pandemic has had on our neighborhoods. But we also see the beauty and the ingenuity and creativity that people have been able to foster from this shit.”

The album retains Earthgang’s flair for the theatric, with skits that break the record into episodic sections. There’s high drama in the album-opening title track, which begins with triumphant horns and builds toward Olu singing “Tell me that heaven ain’t Black” with an urgent and guttural whisper. Elsewhere, on the Future-assisted “Billi,” the group’s talent for collaboration gets to shine through. The song’s drums hit like boulders bouncing on top of Jell-O, with Olu and WowGr8 each upping the ante in their vocal heroics.

On “Power,” they join forces with CeeLo Green and Nick Cannon (“My dog,” ​​Olu says of the Masked Singer host) to provide what feels like a raison d’être for the entire project: declaring independence from the systems that might want to contain what it is that Earthgang has set out to do. Both CeeLo and Cannon deliver, offering up tales of resilience that cut through with honesty. “There’s shit that we can never say that CeeLo can say, because we haven’t even seen shit from a whole different era,” WowGr8 says. “When he said, ‘I done been in the room/Watched others bend and assume,’ I was like, ‘Damn, bro.’”

For Earthgang, this latest album was about reconnecting to the world and feeling closeness through music. Olu recalls their first in-person meeting with famed Atlanta record-business veteran Kawan Prather, known for his close work with the Dungeon Family. Prather, who served as Ghetto Gods’ executive producer, asked Olu and WowGr8 to think of the songs from their debut that got audiences the most excited at their shows. “We realized that the energy of these songs is what we want to go towards,” Olu says. “Then, once we started listening back to the records, we were seeing this underlying theme about the present moment. We was like, ‘OK, we’re talking about us finding our light in this wild-ass situation.’”

Earthgang sees these themes as a continuation of their work on Spilligion, a far-reaching exploration of faith and spirituality in Black culture that they released in the fall of 2020 with their peers in the Spillage Village collective, who include the rapper JID, producers Hollywood JB and Benji, neo-soul singer Mereba, and R&B star 6lack. “Spilligion is reflective of when you first experienced the pandemic. I’m talking about the end of days,” WowGr8 says. “That’s what a lot of people felt in the beginning. It was a lot of uncertainty. Then, it’s being at peace with yourself and comfortable with the known unknown.”

And now? WowGr8 continues that the music on Ghetto Gods represents “motherfucking absolute certainty.” The two years of the pandemic have fostered something stronger than fear.

Earthgang have frequently seen comparison to Outkast — but while both acts have sought to expand the boundaries of hip-hop, and both feature two members who rap with distinct styles, the parallels fade after that. Earthgang make music that pushes through the noise of a new generation, weighed down by a ceaseless cascade of information.

Both Olu and WowGr8 put great stock in the idea of connection as a means of survival. “It’s straight-up honesty,” Olu says. He points to “Strong Friends,” a warmhearted track toward the album’s close, as one of his favorites. The song is about checking in on loved ones, since you can never know what someone’s going through unless you ask.

“It’s really just talking about the ability and the strength to open up and to be honest, no matter what anybody says or how they respond to your truth,” Olu says. “It’s an unburdening of yourself.”