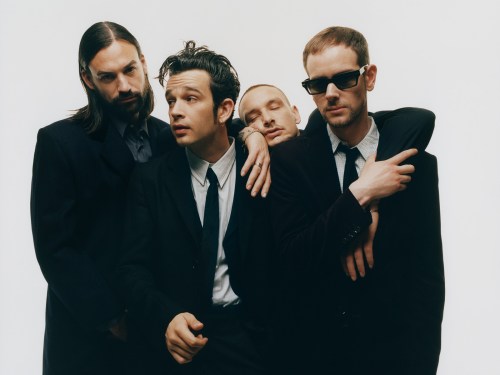 “I’m sorry if you’re living and you’re 17,” Matty Healy croons over the fractured pianos that open the latest album from his band The 1975. The British foursome began when Healy and his co-conspirators were adolescents, and they’ve since grown up in public, navigating Next Big Thing status and the 21st-century panopticon as well as the usual vagaries of getting older. Even though he rhymes “vitriol” with “Aperol” and gets snippy with overheated cultural commentators on that cut—titled “The 1975,” like all his band’s album openers—Healy is clearly sincere in his despair for the world we’re leaving to the next generations.

That duality has helped make The 1975 one of the last decade’s most exciting rock bands on record and in interviews. With Being Funny In A Foreign Language, they reassert themselves at the forefront of 2020s pop-rock, fusing together the textures and musical ideas of soft-rock hits from three decades ago with modern sensibilities in a way that sounds instantly familiar, yet distinctively of-the-moment. Being Funny In A Foreign Language still uses agitation as an animating element, although in a way that’s a bit more nuanced; the volcanic highs of bellow-along tracks like “Sex” and “Love It If We Made It” are traded in for more subtle musical pleasures, while Healy’s lyrics have a tender curiosity about them even when they’re staring daggers at 2022’s bleakness.

Funny, the band’s fifth full-length, was recorded alongside super producer Jack Antonoff in New York and London, with the four members woodshedding out new music, and that studio-magic feel is retained on the album; the emotionally arresting ballad “All I Need to Hear” blooms out of what sounds like a casual jam session, while the extended breakdown of the defiant-crying-at-the-discotechque cut “Happiness” finds the band—as well as a saxophone—locked in a vibe, only ready to break once their soloist has hit his high note. The sax figures prominently throughout the album, an instrument that is key to defusing the band’s moments of high anxiety

The rest of the album is lively despite Healy’s knowledge of the world’s inner workings, taking the fundamental “happy sound, pensive lyrics” contrast of pop to new heights. The revved-up ”Looking For Somebody To Love” spins out of its titular conceit into an examination of the way loneliness can drive people to madness; “Part of the Band” balances emphatic strings on its reference-stuffed verses with gently psychedelic layering on its empathic chorus. “Wintering” is the band’s entry in to the “home for the holidays” canon, its brisk rhythms underlining Healy’s lyrics, a funhouse-mirror version of those “so, what’s everyone been up to” conversations that can dominate family visits.

Funny climaxes with “About You,” a gorgeous soulgaze lament where Healy digs into the George Michael reaches of his lower register as he recalls a past lover, his voice shrouded in swooping strings, fuzzed-out guitars, and drowsy saxophones—as well as counterpoint vocals from guitarist Adam Hann’s wife Carly Holt. When she takes center stage on the bridge, letting Healy know that yes, she was thinking about him too, it’s revelatory; not only is the song yanked out of Healy’s head, Holt’s bell-clear soprano soothes the song’s chaos just enough to add a warmth to the memories that had been tormenting Healy up to that point. It opens up The 1975’s sound in a thrilling new fashion, letting listeners know that there’s still hope out there—even if it’s just from a surprise nestled within a pop song.