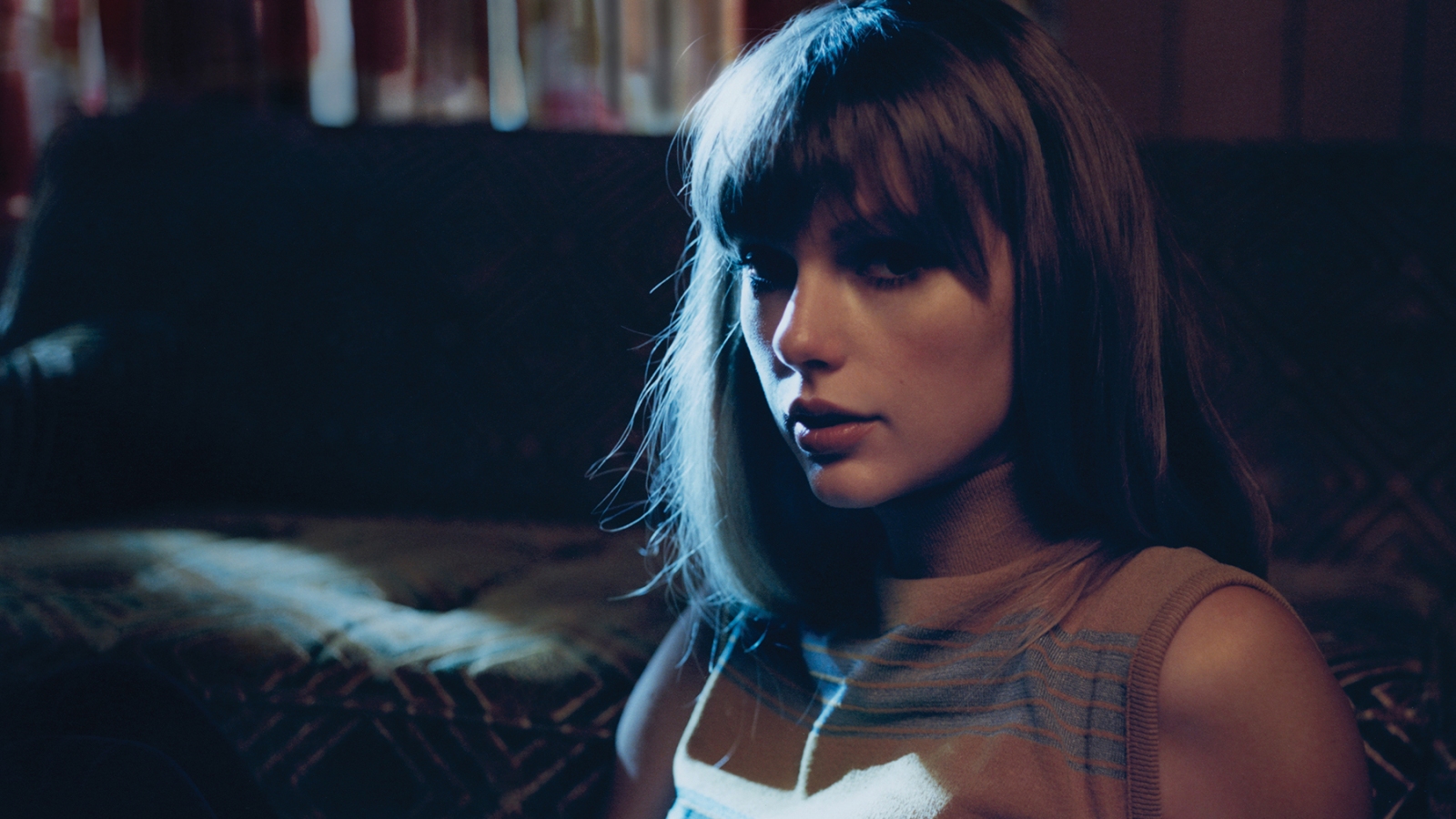 Could you have ever guessed what Taylor Swift’s Midnights would sound like? Since announcing the album in late August, Swift tried out a new rollout strategy: no single, no surprise drop 12 hours later. Instead, it’s been two months of Lynchian TikTok videos unveiling song names and lyric billboards to tide over her increasingly spiraling, clue-hungry fanbase.

Midnights could have been anything. After the bubblegum dream-pop of Lover, Swift veered into the woods for the indie-folk-leaning pair Folklore and Evermore, both released in 2020. Then, she returned to her archives for her Fearless and Red re-records, expanding upon her second and fourth albums with a host of previously unreleased bonus tracks written during each respective era.

So what exactly is Midnights? In some respects, it’s a little bit of all of the above. It most notably picks up where the pure pop triptych of 1989, Reputation, and Lover left off, a dazzling bath of synths complementing lyrics caught between a love story and a revenge plot.

For her tenth release, Swift returned to the studio with her most prolific partner, Jack Antonoff, to talk about her favorite time of night (the middle of it). As she teased in the album announcement, Midnights covers “13 sleepless nights” from her life. In those midnight moments, Swift lets her intrusive thoughts win: her relationship, public image, nemeses, and inner child take over at different points to either ruin or redeem her. But Midnights is more sweet dreams than nightmares, her words acting like a protective shield around her life and most intimate relationships.

Opening track “Lavender Haze,” crafted with some of Kendrick Lamar’s collaborators as well as Swift’s friend Zoë Kravitz, is the most explicit song here about her forcefield of protection. When she announced the song title on TikTok during her “Midnights Mayhem” series, Swift made a pointed comment at “weird rumors” and all the scrutiny she and her boyfriend of six years Joe Alwyn have faced online and from tabloids. She cribbed the song title from Mad Men, describing an “all-encompassing love glow.” Lyrically, the song is reminiscent of “Call It What You Want” and “Cruel Summer,” a tale of the love glow breaking through all the negativity, criticism, and expectations. This time, she’s a little less overwhelmed by the comments, dismissing “the 1950s shit they want from me,” like the constant marriage speculation or the virgin-whore dichotomy she’s been fighting her whole career (“The only kinda girl they see/Is a one night or a wife”). “Lavender Haze,” like the rest of Midnights, shies away from the bombastic pop sound that often made singles like “Look What You Made Me Do” or “Me!” feel like such sonic misdirections from the more subtle and shimmering sound of the rest of the albums they teed off. This time, Swift shows some restraint though she doesn’t lose the playfulness that makes her forays into pop so fun.

“Anti-Hero” is a prime example of just how fun Swift’s pop can be. It’s an album standout and due to be the official lead single. This time, her enemy is her own damn self as she wallows in the same type of “past her prime” anxiety she sings about on the Red (Taylor’s Version) vault track “Nothing New” and underrated Lover cut “The Archer.” It features some of Swift’s most shocking lyrics on the album, like the sure-to-be divisive line “Sometimes I feel like everybody is a sexy baby/And I’m a monster on the hill.” But it’s the next part that is a deeply revelatory, “Blank Space”-level burn of both herself and her critics: “Too big to hang out/Slowly lurching toward your favorite city/Pierced through the heart but never killed.” And the moment in the song where she imagines her non-existent daughter-in-law murdering her for the money in the future? Deliciously diabolical and weird in ways Swift rarely lets out.

Like Swift’s other Track Fives, the muted “You’re on Your Own, Kid” delivers a few particularly incisive, deep gut-punches while Swift does some light inner child therapy work. (In Swiftie lore, the fifth track on every Swift album is the most emotionally devastating). The song is a nostalgic slow-burn that begins a one-two punch of past relationship memories creeping backing into her night’s mind. It’s almost like a behind-the-scenes look of her as a teenager writing a song like “Teardrops on My Guitar,” a heartbreak origin story that gets her out of small town life and into the spotlight. “I see the great escape/So long, Daisy May,” she opines before posting up in her room to write the songs she’d sing in parking lots before taking the money and running away altogether. Following track “Midnight Rain” is an older and more jaded moment of lost love; here, she’s the titular midnight rain, a girl too distracted by her career chase to settle down. This time she’s the one to break a small-town boy’s heart.

“Vigilante Shit” and “Karma” are the only truly scorched-earth moments on the album. They’re way less melodramatic than a “My Tears Ricochet” or “This Is Why We Can’t Have Nice Things”; in these fantasies, she’s watching her enemies destroy themselves. The dark-pop “Vigilante Shit,” reminiscent of her friend Lorde’s moody debut Pure Heroine, offers some salacious claims that could be about any of the three men she’s been publicly feuding with for the last six years. In the verses, she’s befriended at least one of their ex-wives and makes the only cocaine reference in her entire discography (“While he was doing lines/And crossing all of mine/Someone told his white collar crimes to the FBI”).

“Karma” is a bubbly counterpoint, as Swift celebrates how much she loves seeing her nemeses get what they deserve. It’s a love song to pettiness: “Karma is my boyfriend/Karma is a god/Karma is the breeze in my hair on the weekends/Karma’s a relaxing thought/Aren’t you envious that for you it’s not?”

The majority of the album, however, is laser-focused on the anxiety and speed bumps two lovers face as their relationship develops. “Maroon” and “Labyrinth” are straightforward reckonings with love potentially lost. “Question…?” is a bubbly “Delicate”-style pop quiz for her paramour who maybe put up more of a fight before they ended up with two people they probably shouldn’t be with. By absolute knockout “Bejeweled,” she’s got him in the palm of her hands, presenting herself as the ultimate prize.

The only true disappointment on the album is the tease of Lana Del Rey’s feature on “Snow on the Beach” that’s more of a simple harmony than a true duet; the song itself is a hazy, wintery dream-pop cut in the vein of “Mirrorball” with a killer Janet Jackson reference. Hopefully this isn’t the last time these two talents cross musical paths.

Midnights caps off with “Mastermind,” where Swift lays out a long-planned initiative to get her crush to fall in love with her (it doubles as a cheeky nod to her own “cryptic and Machiavellian” clue-leaving ways). Funny enough, it follows the tender love song “Sweet Nothing” she penned with said strategically-secured boyfriend, so job well done to Ms. Swift.

As Swift has returned to her archive for to undertake the project of re-recording her previous albums, it’s clear slipping back into her past self has unlocked something brilliant and fresh in her songwriting. Midnights may come as a surprise to the most newly turned fans of her music, those who only learned to like her songwriting when it came in the traditionally respectable Folklore/Evermore package. But like many of her purely “pop” releases in the past, Midnights leaves more and more to be uncovered beneath the purple-blue synth fog on the surface. And maybe that’s part of her scheme to begin with.