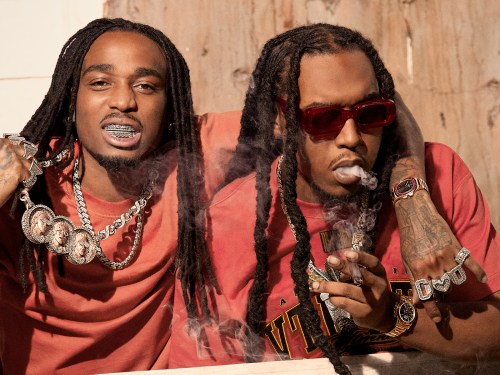 If you’re looking for tea leaves on why Migos is reportedly falling apart, then “Messy” may satiate you. On the 12th track from Quavo and Takeoff’s Only Built for Infinity Links, the former raps, “Bitch fucked my dog behind my back but I ain’t stressin’ (not at all)/You wanted the gang, you should have just said it, we would have blessed it (you should have just said it).” Listeners have speculated that the verses refer to an affair that estranged Migo member Offset had with Quavo’s former girlfriend, the rapper Saweetie.

Unfortunately, Quavo and Takeoff aren’t rappers who overwhelm you with blunt, rhetorical force. There are several moments on Infinity Links that can be (mis)interpreted as commentary on the Migos’ supposed dissolution, which became clear when Offset and his wife Cardi B unfollowed the duo on Instagram, and Offset filed a lawsuit in August against the group’s longtime label, Quality Control Music, over ownership of his solo records. On “Nothing Changed,” Takeoff raps, “When you start gettin’ a little change, watch how your partners and everything change.” On “Not Out,” he muses, “Updated my roster, had to swap out.”

Still, despite their claim that infinity links are “way stronger than Cuban links,” they can’t compare to Raekwon and Ghostface Killah’s grizzled, pugilistic threats on Only Built 4 Cuban Linx…, the 1995 masterwork that inspired their latest jaunt. (In a RS interview, Quavo and Takeoff revealed that Raekwon “blessed” the album title.) At best, the duo plays with language, cadence and rhythm, tossing around Southern slang and adlibs with ease. In their lexicon, beautiful multiracial women are “exotics,” the city streets are “the field,” and friends are “broady.” Their routines hypnotize with the zest of a Hollywood screwball farce, evoking a decades-long tradition of Atlanta as a source for deliriously oddball bass and trap anthems. Fancifully, they call themselves Unc and Phew, a reference to the fact that Quavo is Offset’s uncle despite a mere three years’ age difference. (Takeoff is their cousin.)

Migos at full strength is a wonderful thing, with a near-decade of hits from “Hannah Montana” and “Versace” to Culture and Culture II as proof. Ironically, the controversy surrounding the trio brings renewed attention to a group that has recently suffered from benign neglect, desultory side projects (see Quavo’s Quavo Huncho and Takeoff’s The Last Rocket) and last year’s underwhelming Culture III. Quavo and Takeoff can now recast themselves as survivors familiar with the peaks and valleys of the music industry. It’s an image more compelling and attractive than that “Yall kinda fell off bro, no cap” meme from two years ago, and the duo have nurtured fan speculation with plenty of coy interviews about the Migos rift.

Only Built for Infinity Links find Quavo and Takeoff more than capable of conjuring the old Migos magic by themselves. It’s a patchy collection that seems to go on a bit too long despite a 59-minute running time. Yet memorable moments abound, from “Two Infinity Links,” which hurtles along Budda Beats’ sample of 70s boogie-rock band Ten Wheel Drive with Genya Ravan; to “Hotel Lobby,” where Murda Beatz turns Fabio Aguilar’s laconic guitar loop into a menacing trap pulse. “Bars Into Captions” finds Quavo floating over a reprise of Outkast’s “So Fresh So Clean.” Meanwhile, Takeoff echoes Andre 3000’s famed performance, rapping, “And we are/Creatures that are from another planet/The rocket ship take off I’m ‘bout to land it.” In a meaningful gesture of support for Young Thug and Gunna, they include verses from the currently imprisoned rappers on “Chocolate.”

The album’s second half opens with “Look @ This” and an oddly timed keyboard solo, nodding towards the kind of conceptual touches that producer RZA garlanded Cuban Linx with. But Quavo and Takeoff don’t do anything with the moment, and merely return to boasting about big rings and big ‘tings. A trapsoul collaboration with Summer Walker on “Mixy” doesn’t quite work, with Walker awkwardly flowing over Murda Beatz and Joseph L’Étranger’s track. “Integration” is just plain weird, with Quavo rhyming about all the “white” things he likes, and Takeoff following with the “black” things he likes. “I want white stones on my white clothes, I’m not racist,” says Quavo with an autotune flourish. “They say Black men don’t cheat, I say Black men don’t cry (hell naw!),” adds Takeoff. But hey…that’s what the fast-forward button is for.