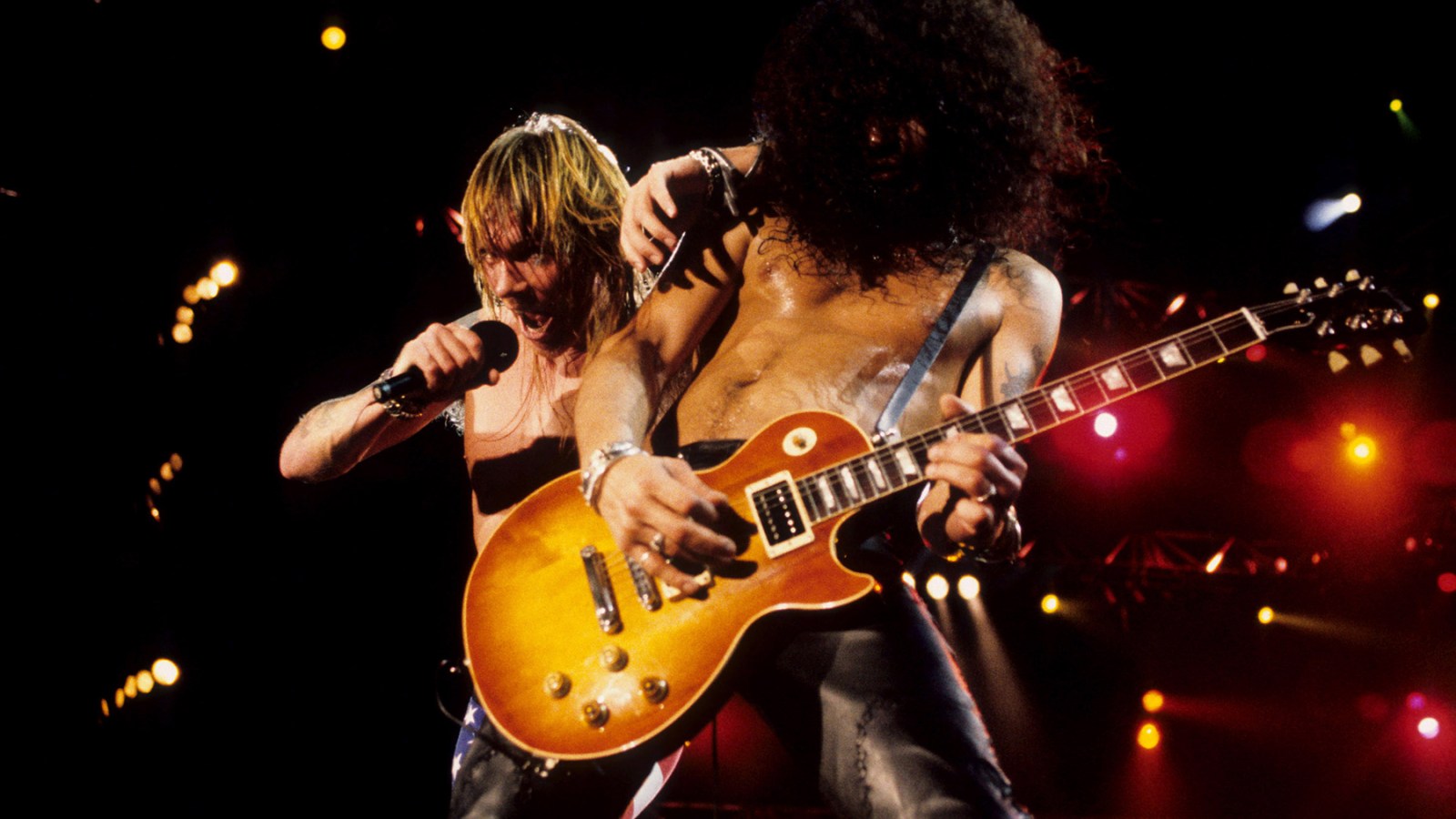 It took Guns N’ Roses less than a year to go from hard-rock paupers, targeted by L.A. street urchins with stuttering taunts of “Welcome to the jungle, you’re gonna die” (or, worse, “feel my serpentine?”), to become the Most Dangerous Band in the World. They were unprepared for fame. Their debut, 1987’s Appetite for Destruction, was crude and rude; its sci-fi cover illustration depicted a sexual assault, its lyrics reveled in misogyny and heroin abuse, one song (“Rocket Queen”) contained literal audio pornography, as a woman pants while Axl Rose behaved in the studio like Axl Rose. It should have been lucky to go gold. But because songs like “Sweet Child o’ Mine” and “Paradise City” were undeniably fantastic, and because such cancelation-worthy hijinx was still welcome —encouraged even — in the Eighties (remember Sam Kinison?), it went to Number One and has since achieved nearly double-diamond sales. In March of ’87, they were playing the West Hollywood club the Roxy; by September, Long Beach Arena. In half a year, they’d become rock & roll nouveau riche.

Many millions of album sales and oh, so much “Patience” later, GN’R were still processing their metamorphosis as they were releasing the evil-twin confessional testaments, Use Your Illusion I and II. At a May 1991 New York City gig, included in this new super deluxe editions of the new Use Your Illusion box set, guitarist Izzy Stradlin slovenly addresses the crowd after a ragged “My Michelle”: “Fuckin’ three years ago, fuckin’ Appetite came out,” he says. “Fuckin’ no one would give the band fuckin’ shit for notoriety or anything. … It was you guys that fucking made us happen. So that being the case, the band got really fuckin’ big. I mean it blew my fuckin’ mind. … So now what we’re doing is we’re fucking touring on an album that hasn’t been released, because when we started out in clubs, that’s how we started.”

“And the moral of the story,” Rose adds, “is never believe anything you read in Spin magazine.”

This, in the Year Punk Broke A.D., was months before Nevermind, and a year before Kurt Cobain, on the exact same journey as GN’R, rocked a “Corporate Magazines Still Suck” T-shit on Rolling Stone’s cover. But even as grunge and punk revivalism supposedly unseated mainstream rock in the Nineties (or so the myth goes), Guns N’ Roses, who’d been covering punk groups the U.K. Subs and the Misfits for years, were playing in stadiums alongside Metallica (another band that covered the Misfits, as well as punks Fang years before Nirvana). Mainstream rock, with all its primordial influences, was still bigger than ever and would remain so for at least a couple more years. This box set, memorializing the 30th anniversary of Guns N’ Roses’ overwhelming and intimidating Use Your Illusion albums — arriving, in true GN’R fashion, a year late — presents some interesting alternate facts for the alternative explosion.

After a short and ugly detour with the Lies EP and its bigoted “One in a Million” (from which GN’R have since quietly distanced themselves), they decided to record Literally Every Song They Know for the Use Your Illusion behemoths. Listening now, the albums are impressive in their breadth and excess: Dylan and Wings covers, two versions of the same five-minute power ballad “Don’t Cry,” an Alice Cooper guest poem on “The Garden” (followed on the track list quixotically by “Garden of Eden”), equal doses of misogyny n’ vulnerability throughout, all of “November Rain” from its sound effects to Slash’s heart-rending coda, and a still-bizarre industro-rap invitation into Rose’s “socio-psychotic state of bliss” (whatever that is.)

On Appetite, they’d reinvigorated hard rock by becoming a punk-rock Aerosmith; now they were the Stones, Elton John, Pink Floyd, the Sex Pistols, N.W.A, and Nine Inch Nails, depending on the song and sometimes at the same time – but still always sounding like Guns N’ Roses. Slash’s long, mournful notes on “Estranged” still sting; Duff McKagan’s iconic hollow bass sound mightily props up “You Could Be Mine”; Stradlin’s hepcat vocals still make finding a head and an arm in a garbage can on “Double-Talkin’ Jive” seem kinda cool; Matt Sorum’s snare-drum thwapping in the chorus to “Dead Horse” remains an effective metaphor; Rose still sounds convincing in his promise that “there’s a heaven above you baby” while breaking your heart on “Don’t Cry”; and they all sound certifiably bonkers calling out Spin founder Bob Guccione, Jr. on “Get in the Ring” like schoolyard bullies. The only thing different in the original albums here is “November Rain,” which now features a real orchestra, instead of Rose’s keyboards, and while the depth of sound is astounding and the strings sound lush and, frankly, gorgeous, it’s hard not to want to hear the airy flute up front the way it was on the original.

The albums, in hindsight, present the paradox of a band of outsiders who have become the biggest band on the planet but still want to be rebels (see also: Neil Young’s fable of Johnny Rotten, and Kurt Cobain’s fable of Kurt Cobain). It’s a portrait of an identity crisis and it eventually tore them apart. But at the time, they rose to the challenge and reaped the rewards, even if by all accounts the Use Your Illusion albums are still Too Much Music.

Together the albums spanned nearly three hours — just about the running time of playing the White Album and Exile on Main St. back-to-back. You’d think with so much material that a box set would include demos and work-in-progress versions of songs, but this collection instead focuses on Guns N’ Roses, the live band. (Incidentally, the gigantic Appetite for Destruction box from a few years ago contained rough versions of “Don’t Cry” and “November Rain,” since they were written in 1986. It’s likely they used their best demos for that release and perhaps the ever-estranged Stradlin didn’t feel like sharing his UYI demos for “Pretty Tied Up” and “Double Talkin’ Jive” for this.)

The two lengthy live shows on the bonus discs here present GN’R at interesting points in the use and abuse of their illusions. The New York gig (which you can also watch on a Blu-ray) was one of three rehearsal “club” dates for the tour that would ultimately divide the band, and it took place at the 1,400-person-or-so-capacity Ritz. Rose tells the crowd he doesn’t like showing up to rehearsals (shocker) so this was his warmup but he nevertheless delivers an impressive, throat-shredding performance throughout, even after injuring a leg mid-gig. He even sounds like he’s having fun. He does the Cool Hand Luke “failure to communicate” monologue himself in “Civil War,” which also features Slash riffing on Hendrix’s “Voodoo Child (Slight Return).” They play “Estranged,” perfectly arranged with all of Slash’s seagull squalls (and, more impressive, the audience is perfectly fine listening to a 10-minute song they’ve never heard before). They jam a little of Alice Cooper’s “Only Women Bleed” before “Knockin’ on Heaven’s Door,” and Blind Melon frontman Shannon Hoon (then unknown) joins them to sing the high parts to the “Don’t Cry” chorus. There’s sense of bonhomie between Rose and the band — the album will be out soon and they’re ready to cross the finish line.

On the next concert recording, captured in January 1992 (just a few months later) in Las Vegas, everything sounds bigger. “You wanted the best … ” a road manager intones, as if it were a Kiss concert. “Well, they couldn’t make it, so you’re stuck with these guys.” By that point, Stradlin also couldn’t make it either (he’d sobered up and quit the band in November, to make a solo album that featured Ron Wood). For the concert that night, he was replaced by Gilby Clarke (his Ron Wood in GN’R). They tell the audience that it’s the biggest crowd the venue has ever held so they’ll play louder. But for a bunch of Would-Be Professional Rock Stars, they still sound like they’re having fun — just a little more polished, as their heroes in Aerosmith, the Stones, and Alice Cooper had taught them to do on their tours together. And it works. (That interest in filthy lucre is also where they depart from the nascent “alternative” scene; like the Sex Pistols’ Steve Jones, who bemoaned the Clash’s anti-capitalistic stance at the advent of punk, GN’R wanted to get rich n’ famous.)

This live album, which spans three CDs, is the Guns N’ Roses we know today: big and deafening. They cover “Live and Let Die” (loudly) and the Misfits’ “Attitude” and “Knockin’ on Heaven’s Door” (which also includes tangents into “Hotel California” and “Only Women Bleed” and Rose demanding, “Gimme some reggae!” twice.) Rose plays a deft classical piano intro to “November Rain.” “Rocket Queen” replaces groupie gasps with Slash on a talk box and now lasts nine minutes. Rose approximates a Schwarzenegger impression before the Terminator 2 song “You Could Be Mine.” Slash plays the Godfather theme. Everyone takes a break in “Move to the City” for the horn section to do a jazz-funk jam. And Rose whispers “alone” dramatically on “Estranged.” GN’R’s musicians each hit bum notes here and there, but who really cares? It’s loose, baggy, and fun. It’s a reminder that rock & roll can and should be unpredictable (the GN’R hallmark) and that it could reach as many people as the downer rock that followed it (and never got quite as big).

By this point, the band had been called up from the streets and had risen to the occasion. They were still working together, and, gosh, maybe even liked each other. Three decades since their release, we know understand how the Use Your Illusion albums represented the most of what they could do, and they secured their legend. If they had called it quits completely after the tour, like the Police did after Synchronicity, and avoided all the nasty press digs, it could have been a clean break and we probably still would have gotten Chinese Democracy. But Use Your Illusion was a testament to their determination, which is still their driving force. Not grunge, not Spin, not good taste (or even bad taste) could hold them back then or now. This is a portrait of the kings of the jungle.